Nearly two decades later, FLCL Alternative steps out of its predecessor’s shadow to tell a story of friendship, sadness, and saying goodbye.

The original FLCL holds an almost sacred place within peoples’ memories. First airing stateside in 2003, FLCL came at a crystallizing time in many adolescent lives. Its outlandish style, punchy soundtrack, and heartfelt story continue to enthrall audiences. Naota Nandaba, the broody 12-year-old protagonist, embodied a unique mixture of hormones and suburban ennui. His story resonated with kids who felt trapped in their lives, eager to see what lay beyond the fog of their hometown. Alternative moves forward to focus on the twilight years of childhood and how we come to terms with leaving it behind.

“Every day just drifts off into an orange light. It’s too bright for my migraine or my eyes that are swollen from crying all night… but familiarity can be a novelty. So, even if tomorrow is just a gathering of yesterdays, cracked and tangled, like my favorite nail art and worn out loafers… in this city – I. Will.” – Kana Koumoto

Can you remember every specific detail of your high school life? The streets you and your friends walked at night, spending more time than money. Is every pavement crack or every streetlight ingrained into your memory?

No, of course not. Yet you remember the feeling. The rise of the concrete, the yellow glow of the lamps, the energy that all of you carried into the night. It’s a feeling that’s stuck with you. It’s a feeling that you can recall vividly but never quite see with any clarity. Now just memories, but back then they were everything.

Time moved on and so did you. One of the best lessons we learn in life is to not let our past define us, but allow it to give us strength all the same. FLCL Alternative wholeheartedly abides by that philosophy. 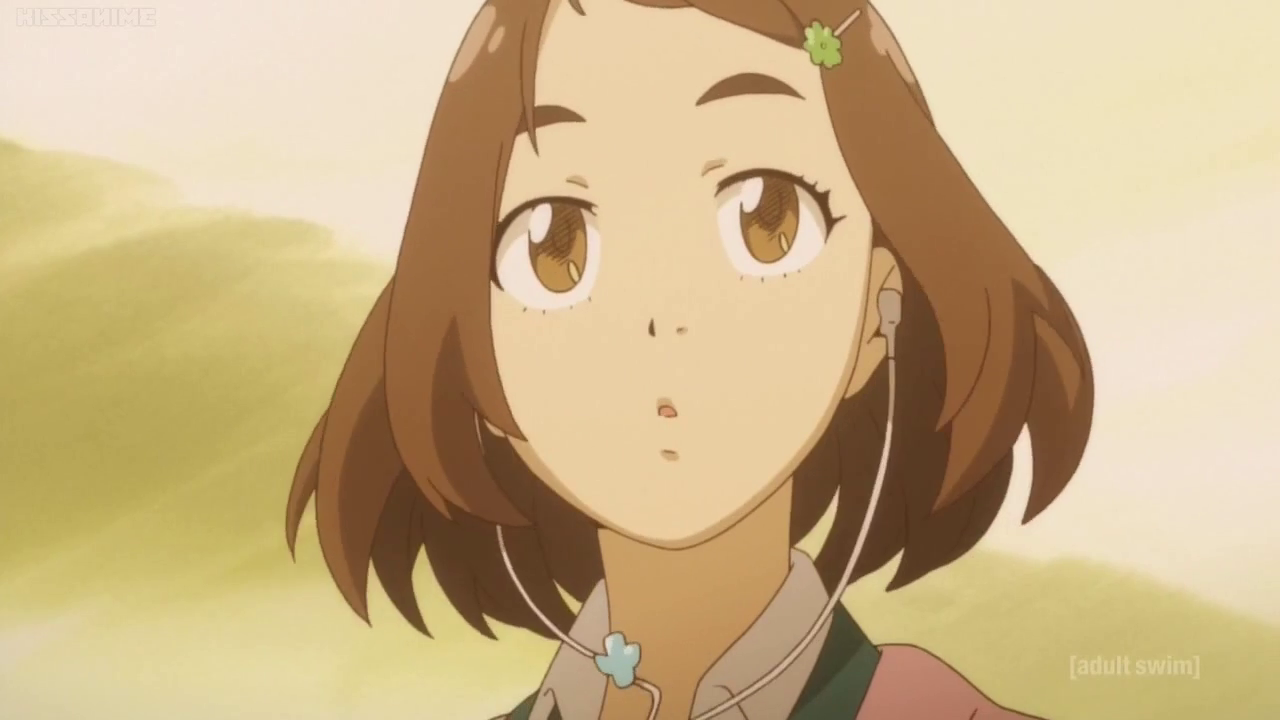 Alternative tells a fairly straightforward narrative in six episodes. The first half opts for a traditional slice-of-life approach and centers around Kana and her three friends. The second half focuses more on Kana herself and how she comes to terms with her rapidly changing life. The season as a whole establishes a clear theme of not just “growing up”, but learning how to do so.

This third season follows on the heels of the second FLCL series, titled FLCL Progressive. While praised for easing fans back into the franchise, Progressive nonetheless suffered from a number of issues. Chief among them was the deliberate obtuseness behind the narrative.

The second season focused on expanding the existing world of FLCL. A somewhat puzzling endeavor, since that puts the cart before the horse. The absolutely bonkers lore of Medical Mechanica, N.O. powers, and giant space pirate birds is definitely fun, but should ultimately function as vehicles for the characters. All of that lore still exists in Alternative, but it plays a far smaller role.

I Think I Can

Lying at the heart and soul of season three is the friendship between Kana, Pets, Hijiri, and Mossan. They bring such a warm sincerity to the show that pops from the screen and truly convinces you these characters are close. Silly idiosyncrasies like lazing around on each others’ bodies or goofing off in gym class tell you so much with so little. 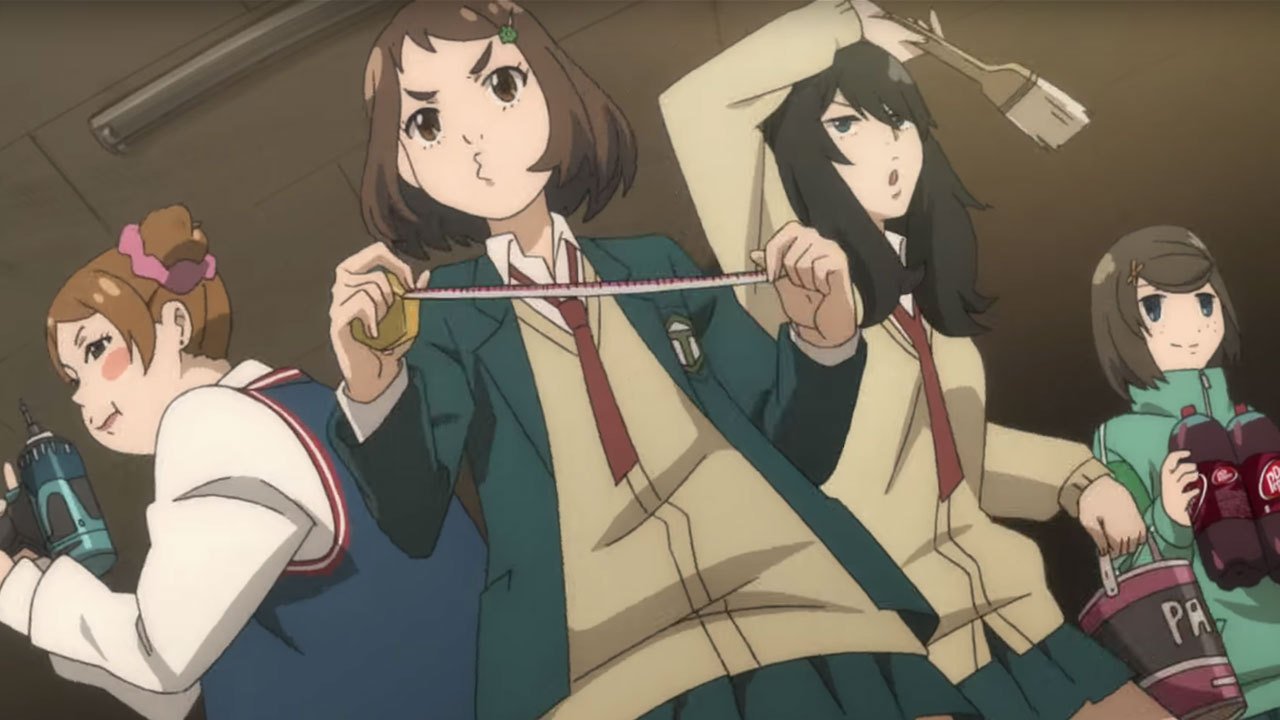 Making her third appearance in the franchise, Haruko Haruhara returns to the world of FLCL in a flash of sexy, snarky thunder. Unlike her previous iterations, Haruko in Alternative acts far more reserved and mellow. This works to surprising effect as a foil to the mild-mannered Kana.

Where previous protagonists Naota and Hidomi were hotheaded and demure, respectively, Kana is perfectly level and cheery. Much of her internal conflict lies in her coming to terms with adulthood. Haruko’s almost mentorly presence helps to ease that transition. She’s not as aggressive as she was with the other FLCL protagonists, but her smarmy teasing shows up now and then.

Haruko’s presence highlights everything that’s weird and wacky with FLCL. Her ultimate goal is to fight back against Medical Mechanica’s attack on Earth. In order to do so, she calls upon Kana for help. Deep within her lies a powerful potential, something inherently tied to her maturity. Haruko’s role as Kana’s mentor is to help her foster that energy and use it to beat back the aliens who want to iron out our planet. 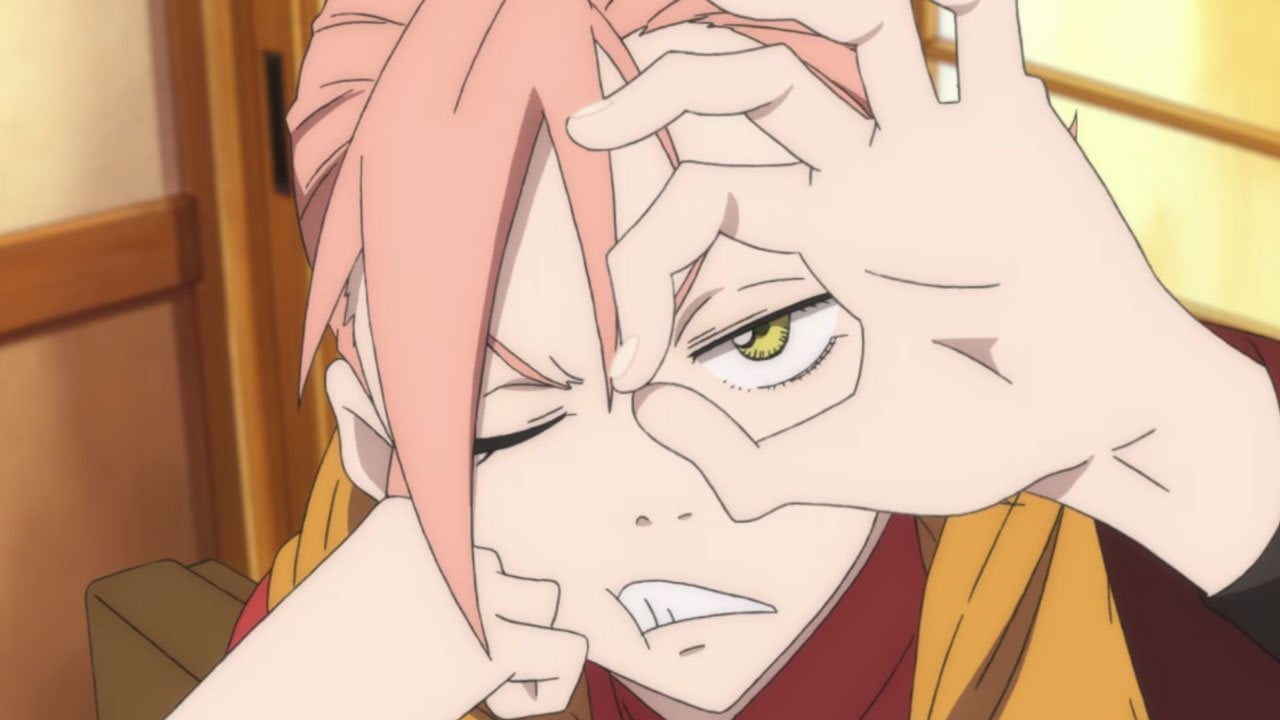 In spite of that outlandish premise, Alternative’s focus on its characters keeps the story grounded. Kana’s rapidly changing life mirrors the impending attack of Medical Mechanica. The two reach their climax in a powerful final episode, where Kana draws strength from her love for her friends.

That campy conflict works perfectly because Alternative consistently puts the characters first and foremost. While the show weaves metaphors and themes into its narrative, its focus on the cast prevents it from being pretentious. It doesn’t wax philosophic towards some vague notion of adolescence (like Progressive did). Alternative attaches these strong themes to an equally strong cast. In just six episodes, the audience comes to care for its characters such that we believe not only in Kana, but her feelings too.

Alternative’s animation is rather tame compared to the two seasons prior, but it still carries that signature FLCL flair. The first and second season have a bouncy quality that utilizes cartoon logic. Uzis materialize and shoot endless streams of bullets, while headphones drill into a 14-year-old’s skull. The stylized animation kicks reason to the curb to hilarious effect.

That doesn’t happen so much in Alternative. Even with its share of monster fights and comedic asides, these visually dynamic sequences don’t always mesh with the slower paced slice-of-life tone. However, given the context of a heavily character-driven season, that works out well enough.

When the show does break out its big visuals, they act as emotionally crystallizing moments for Kana. This dichotomy between action and slice-of-life may not give the most dynamically interesting animation, but it plays perfectly towards Alternatives broader themes. Nowhere is this more apparent than in the gorgeous ED. 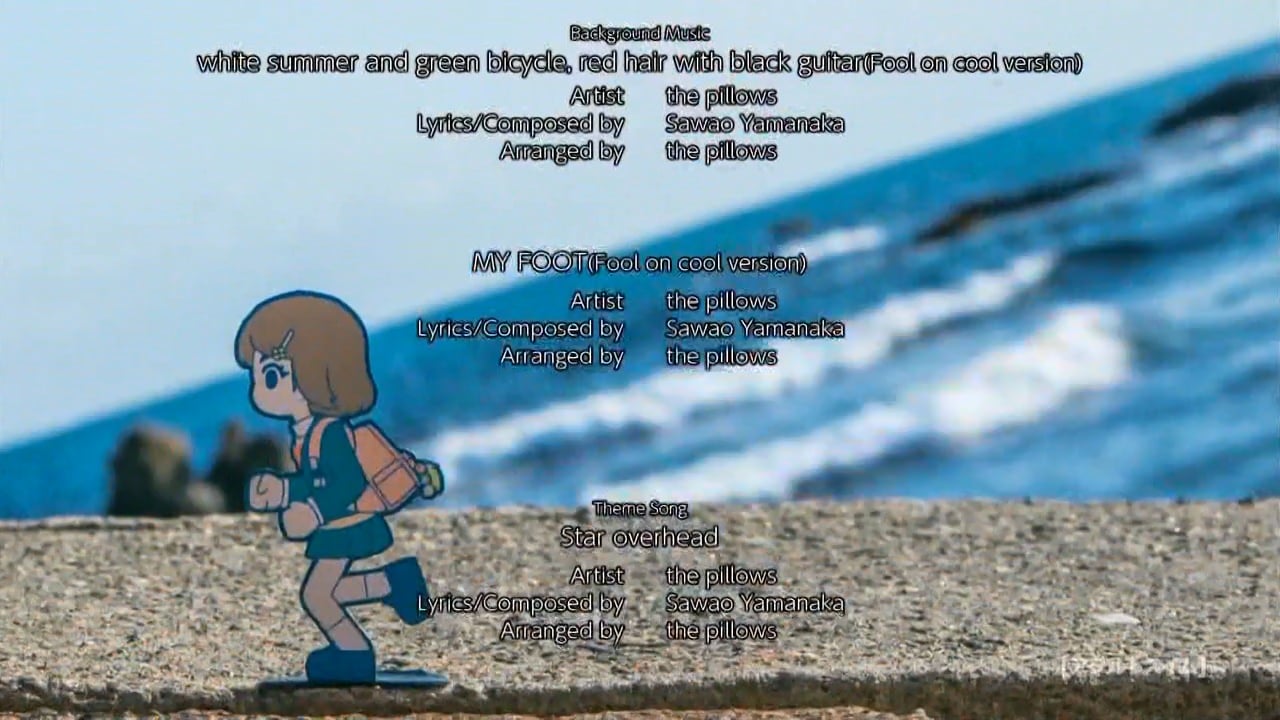 The Pillows have a somewhat muted presence this season, but they come out swinging full force for Alternative’s ED. The band delivers an energetically wistful performance with “Star Overhead”. A thumping drumbeat carries forward dreamy vocals and bright guitars as the singer recalls memories from his past. It’s the perfect bookend to a series like Alternative, made even more effective with the visuals.

In a nod to the original FLCL’s ED, Alternative’s features a paper cutout of Kana moving in stop-motion through various parts of town. Unlike Progressive’s ED, Alternative’s doesn’t make any attempt at shoehorning in explanations for the “lore”. This ED is all about Kana.

Like Naota before her, Kana is so familiar it’s painful. She reminds us of days gone by, lost in the twilight of youth. Days that we didn’t realized we’d miss until they were gone. Through the vehicle of cute anime girls, frenetic action, and offbeat dialogue, Alternative embodies that exodus into adulthood.

In so many ways, Alternative takes after the original, but never does it rely on that connection as a crutch. It explores themes and ideas intimately tied to FLCL but from a different viewpoint. Adolescence covers a broad spectrum of youth, and all three seasons aim to capture their essences.

Alternative puts Kana Koumoto at the cusp of adulthood. Unlike Naota or Hidomi, she’s far from eager to race forward into the unknown. It terrifies her. Most terrifying of all is how her life and friends are changing. That fear holds us back, a silent pain within our hearts. It’s the pain of knowing you’ll never have a day at the beach together again. That life is splitting you all off in different directions. That you have to say goodbye.

Kana opines that “familiarity can be a novelty”, and there’s truth to that. Familiarity offers a routine sense of joy, comfort, and belonging. It’s dangerous, though. The bonds that tie us together are the same ones that hold us back. We can’t think to move forward if we’re too focused on the past. So we cut ourselves loose, gritting our teeth against the pain.

But that’s part of growing up, isn’t it? 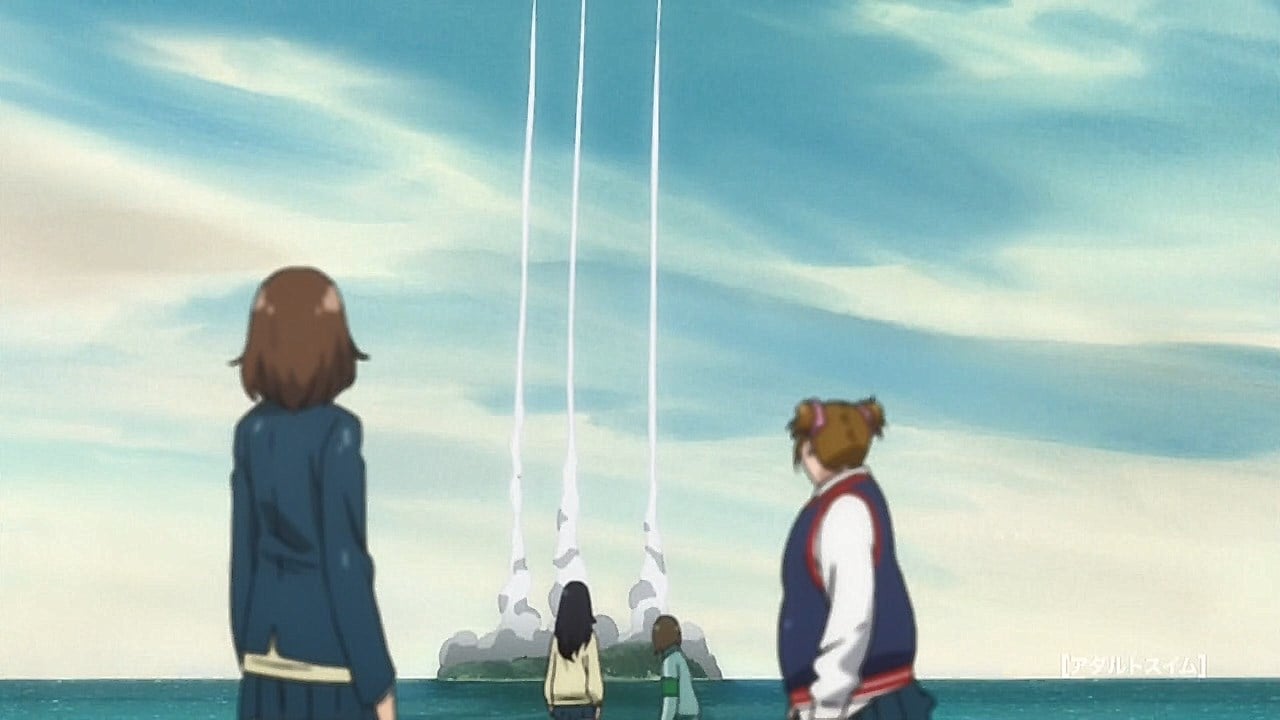