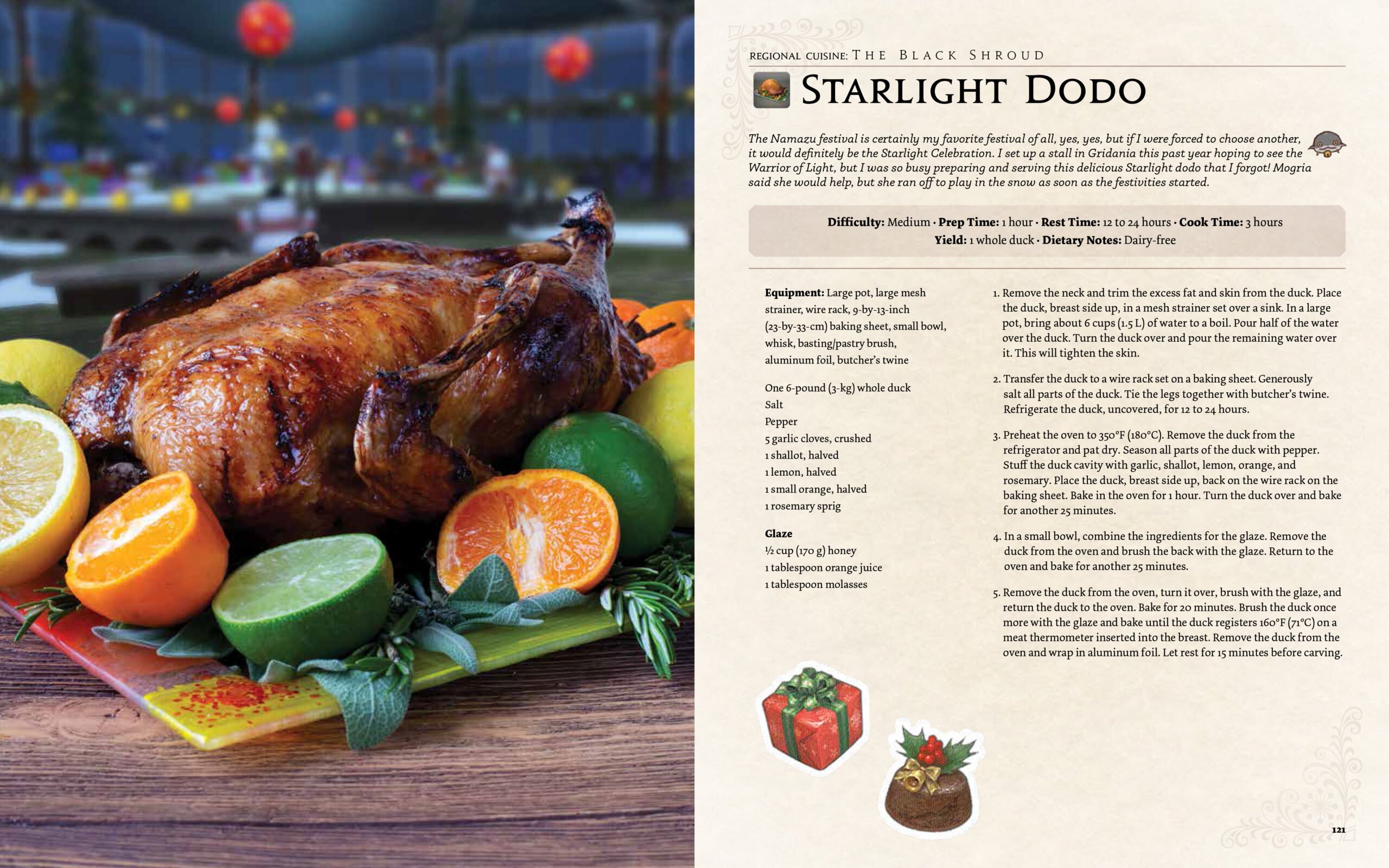 Pop culture themed cookbooks are hugely popular at the moment. From Marvel, to Star Wars, Scooby Doo, Doctor Who and more, geeky cookbooks are all the rage and it isn’t hard to see why. Unless you have a fondness or an affinity for cooking, prepping and making a meal can sometimes seem like a chore. These kinds of fun cookbooks are a great way to learn how to cook in an engaging way (particularly if you are a terrible cook and also a huge nerd like me). Video games have cookbooks by the dozen based on all sorts of franchises, such as Fallout, The Elder Scrolls, Pokemon and Minecraft to name a few. Food is a hugely common element throughout video games- usually acting as a form of health or a power up – and so cookbooks based on games make a lot of sense as there are tons of unique food creations possible. The latest to get in on this is the Final Fantasy franchise, with Square Enix and Insight Editions teaming up to release The Ultimate Final Fantasy XIV Cookbook in November.

Final Fantasy is a franchise where food is a big part of character stats and the MMORPG Final Fantasy XIV is no different, with tons of both sweet and savoury options that can be made and consumed in game. I’m not quite sure if the cookbook is going to have the likes of the Snurbleberry Tart- I’m fresh out of Snurbleberries unfortunately-or the Shark Fin Soup (unless you are feeling particularly brave when it comes to gathering ingredients), but there are still going to be tons of options for real life recreations of in game foods such as La Noscea’s Rolanberry Cheesecake. The cookbook will be releasing on November 9th, 2021. Make sure to check out the press release below for more info as well as a sizzle video showcasing some of the recipes that will be in the book.

LOS ANGELES (August 4, 2021) – SQUARE ENIX® and Insight Editions are today revealing The Ultimate FINAL FANTASY® XIV Cookbook, giving fans around the world a chance to experience the gastronomical delights Hydaelyn has to offer.

Releasing November 9, the 192-page cookbook provides an opportunity to recreate and experience the rich culinary landscape of FINAL FANTASY XIV Online. Featuring favorite flavors from across Hydaelyn and Norvrandt with easy-to-follow instructions, this tome provides numerous tips on how to make the most of the ingredients involved and includes recipes such as the Farmer’s Breakfast, Knight’s Bread of Coerthas and La Noscea’s Rolanberry Cheesecake.

Key features of the book include:

Recipes for every occasion, from quick snacks you can enjoy while exploring Eorzea to decadent desserts and meals fit for royalty, this book contains recipes for both simple and celebratory fare.

A stunning addition to your collection, this exquisitely detailed hardcover book is the perfect acquisition for your kitchen library—a must have for every FINAL FANTASY fan.

The Ultimate FINAL FANTASY XIV Cookbook is available to pre-order now at the SQUARE ENIX Store and select retailers. An exclusive version of the cookbook featuring an alternate cover design will be available to players in North America and Canada who purchase the book through Gamestop.

More information on Square Enix, Inc. can be found at https://square-enix-games.com

Victoria Rosenthal launched her blog, Pixelated Provisions, in 2012 to combine her lifelong passions for video games and food. She resides in Houston, Texas. Victoria is the author of Fallout®: The Vault Dweller’s Official Cookbook and Destiny: The Official Cookbook.

Celebrated for its unwavering dedication to quality, Insight Editions is a publisher of innovative books and collectibles that push the boundaries of creativity, design, and production. Through its acclaimed film, television, and gaming program, Insight strives to produce unique books and products that provide new ways to engage with fan-favorite characters and stories. For more information, visit www.insighteditions.com