‘Under the Silver Lake’ is Destined for Cult Status

David Robert Mitchell’s third feature is a mess of a film, but it’s also an incredibly entertaining mess that had me glued to the screen from start to finish (despite the two and a half hour running time). It’s a movie that shifts between so many characters, themes, and subplots, it will leave most audiences confused, and who can blame them? There are so many ideas sliding into Mitchell’s whirlwind of pop culture overload that it’s understandable not to find coherence in it. Some storylines conclude, some intersect, others squander – and some scenes feel like they were lifted from another film and accidentally spliced in. And yet, that might be why Under the Silver Lake is destined to find a huge cult following in years to come.

Mitchell is aiming big with his latest feature. He’s not just trying to hit a home run – he’s looking for a grand slam. Some things work and some things don’t, but in a world littered with mediocre, formulaic fare, Under the Silver Lake at least stands apart from most movies coming out of Hollywood. It’s a bold, bewildering tale about obsession and paranoia and much like his 2014 indie-horror hit, It Follows, Under the Silver Lake is a movie in which the main character is either being followed or he himself is following others. Only this time, he’s made a detective story. 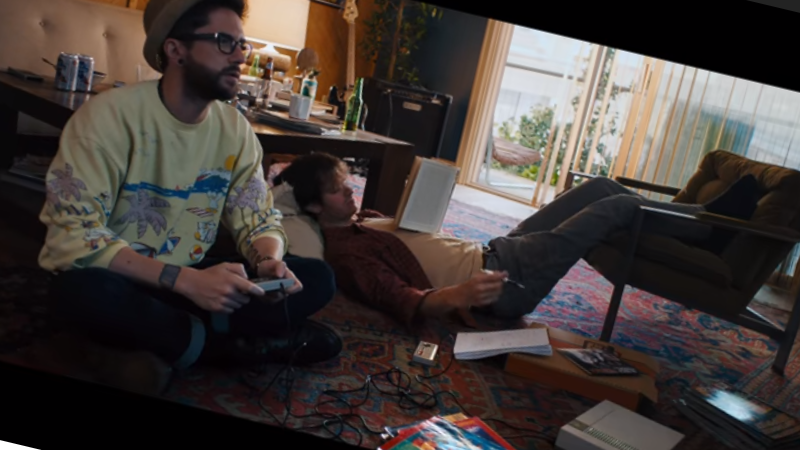 Nintendo plays a big part in the plot of this movie.

Under the Silver Lake is a bold, bewildering tale about obsession and paranoia

At the center of Under the Silver Lake is Sam (Andrew Garfield), a disenchanted 33-year-old with no job, no social life and no ambition. He’s about to be evicted from his L.A. apartment, and he’s not bothered to look for a job, let alone try to come up with the money to pay his rent. Sam’s a bit paranoid, incredibly selfish, entitled and downright lazy. One could say, Sam could stand alongside Jeff Lebowski (The Big Lebowski) and Doc Sportello (Inherent Vice), if maybe, a little less “cool”. He’s also blinded by nostalgia; so much so, he still keeps the very first Playboy he ever masturbated to under his bed. Sam’s also a bit of a perv and spends most his days spying on his topless neighbor from across the courtyard (ala Jimmy Stewart in Hitchcock’s Rear Window). One day his eye turns to Sarah (Riley Keough), a Hitchcock blonde (think, Kim Novak in Vertigo) who makes a big splash by the pool when channeling Marilyn Monroe. The two eventually have a drink together and make plans to hang out, only before they do, Sarah mysteriously vanishes overnight; her apartment vacant. He barely knew her, but they shared a kiss and that was enough for him to become obsessed with finding her. Boasting the overactive imagination of a wannabe detective, Sam embarks on a surreal quest to decode the secret behind her disappearance, leading him into the dark underbelly of the City of Angels. There’s enough happening here to fuel an entire TV series, or maybe even two. 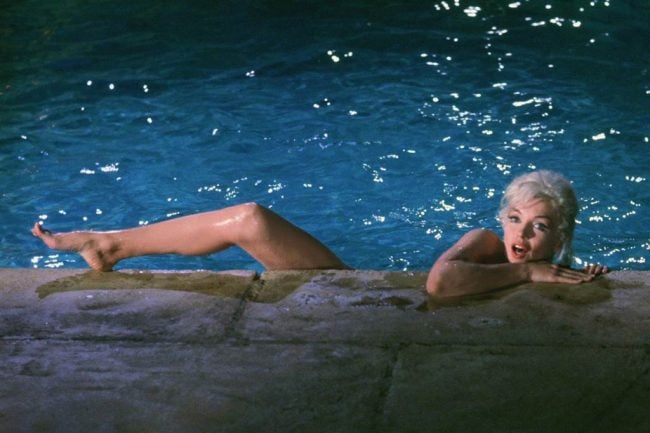 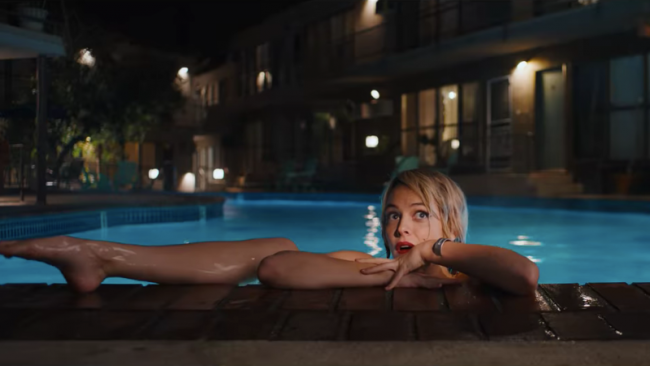 Often neo-noir is full of red herrings and Under the Silver Lake is no different. There’s plenty to be suspicious about as Sam’s obsessive amateur investigation to find Sarah takes him through an incomprehensible maze of conspiracies involving subliminal messages; hidden codes; a missing movie producer; a prostitution ring of young woman dressed up to look like movie characters; a Goth band called Jesus and the Brides of Dracula; and long-buried clues found in Nintendo Power magazine (I’m not making this up). Under the Silver Lake is a down-the-rabbit-hole kind of movie that only starts making sense (sort of) when Sam meets Milo (Patrick Fischler) the deeply paranoid comic author of a popular black and white animated zine that explores the legend of a killer owl-woman and the string of canine murders plaguing the city of L.A. With the help of a cereal box and the original Legend of Zelda map, Sam cracks a numerical-alphabetical code that leads him to the Griffith Observatory, where an old man named the Homeless King (David Yow) leads him to a series of underground tunnels and eventually to the home of The Songwriter (Jeremy Bobb), a multi-talented musician who turns out to be the secret songwriter behind all pop music’s biggest hits. Like I said, Under the Silver Lake is at times baffling. It’s the sort of film where things just happen and mysteries are only partially solved –  a film where an aimless detective finds himself always one step behind a plot that turns out to be bigger than he could have dreamed. As our very own Redmond Bacon wrote, “Under the Silver Lake is hardboiled fiction for the Reddit generation”. Sam searches for clues in movies, music, video games, comics and other forms of pop culture that he’s obsessed with in order to give meaning to his quest – and by extension, give meaning to his sad, lonely life.

David Robert Mitchell’s third film will no doubt bring up many comparisons to better movies of yesteryear including Roman Polanski’s Chinatown; Robert Altman’s The Long Goodbye; David Lynch’s Mulholland Drive; Robert Aldrich’s Kiss Me Deadly and even Paul Thomas Anderson’s Inherent Vice. It may also at times remind you of Richard Kelly’s equally ambitious and equally messy, Southland Tales. Yet, even as it pays homage to these Los Angeles noirs, Under the Silver Lake is its own beast, peppered with Mitchell’s unique directorial flourishes, hypnotic and arresting sequences, and a lush soundtrack by composer Disasterpiece that recalls Bernard Herrmann’s best work. No doubt some will dismiss it as an overlong, incoherent mess, and some will criticize its depictions of women, but others will be left smiling while waiting to see just how far this idiosyncratic detective story will go. Maybe this is grading on a curve, but I can’t fault Mitchell’s ambition here.

‘Katana ZERO’ Review: A Thrilling Journey of Choice and Death