Playing out like an R-Rated version of Home Alone, Michael Peterson’s gritty thriller pits a clever young boy against a psychopath in a bloody game of cat and mouse. For a film with a very basic premise, a small cast, and one location, Knuckleball is a tight, efficient thriller that should be a hit for its nailbiting suspense as well as the age-old theme of a kid who outsmarts the grown-ups.

Something doesn’t seem right when Henry (Luca Villacis) is dropped off at his grandfather’s (Michael Ironside) farmhouse to stay for a weekend. His mother (Kathleen Munroe) had a falling out with the old man after the death of her mother, whom we learn committed suicide by hanging herself in the barn years back. But with nobody else to turn to, Henry’s dad (Chenier Hundal) convinces her that Jacob should be fine and could use some time bonding with his granddad. 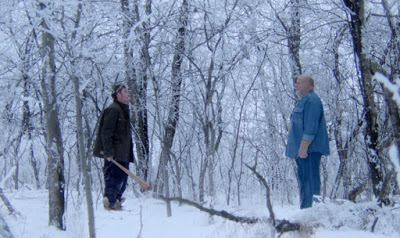 At first, Henry spends the majority of his time helping his pops with work around the farm and playing video games in between chores, but it doesn’t take long before Jacob and Henry realize they share one thing in common – their love of baseball. When time permits, Jacob teaches Henry several baseball pitching grips, yet despite Henry being a natural talent, he realizes he leans too heavily on throwing a knuckleball. Because of it’s erratic, unpredictable motion, he warns Henry that while the pitch is difficult for batters to hit, it is also difficult for pitchers to control. It’s “too unpredictable,” he says; a piece of advice that may later save his life.

This being a horror film, we expect something terrible is about to happen; so when an overly friendly neighbour (Munro Chambers) stops by for a visit, it doesn’t take long to realize he’s a potential threat to young Henry. Suffice to say, with a storm brewing, unreliable phone service, and his Grandad no longer around to help, Henry finds himself in a dangerous situation where his very survival depends on how well he can make use of whatever is lying around the house in order to build traps and keep the intruder from getting to him.

A young boy trapped alone in a house with a ruthless killer and a huge snowstorm about to hit.

Set in an isolated Western Canada landscape, cinematographer Jon Thomas makes excellent use of the beautiful winter setting with wide shots that convey the isolation of the farm and the harsh conditions of the storm about t0 hit. Though the music is a bit heavy-handed, director Michael Peterson manages to keep us on the edge of our seats during the cat and mouse chase. While the second half explodes into a violent, back-and-forth pursuit that will have audiences gasping, it’s the first half that makes this a better-than-average home invasion thriller, thanks to the time given to set up the relationship between Henry and Jacob. And thankfully, the core cast is great.

Appearing in almost every scene, Luka Villacis knocks it out of the park, carrying the entire pic on his small shoulders while Michael Ironside is equally terrific as his tough-as-nails Granddad. It helps that the relationship between grandfather and grandson feels genuine, giving weight to the film when Henry must later fend for himself. Meanwhile. Munro Chambers does a decent enough job as Dixon, Jacob’s creepy neighbor who has a thing for little boys.

Director Michael Peterson, best known for the LARP comedy Lloyd The Conqueror, along with co-writers Kevin Cockle and Jordan Scott might borrow the premise from Home Alone but make no mistake, Knuckleball is an appropriately terrifying film, downright minimalist in approach, and all the better for it. It’s brutal, bloody, and not afraid to put its child lead in danger, especially during the intense third act which at times recalls Stanley Kubrick’s The Shining. Working with a small crew, a small budget and having only 24 days to shoot, Peterson somehow made one of the best films to screen at the 22nd edition of the Fantasia Film Festival. Of course, it isn’t perfect (what is?). Where it begins to falter is with the scenes involving Mary and Paul and the supernatural twist that you could see coming a mile away. Did I mention this film also has a lot of foreshadowing? That aside, Knuckleball is a tight, smart thriller that manages to throw a few curveballs, and despite some flaws, will keep you riveted right up to the very end.

Anime Ichiban Podcast #6: Why Haven’t We Been Summoned to Another World Yet?

‘Harpoon’ — A Nasty Thriller that Mostly Hits the Target

‘Promare’ Feels Like the Younger Brother of ‘Gurren Lagann’

‘Freaks’ is a Superb Sci-Fi Thriller That Keeps You Guessing

‘Kingdom Hearts III’ Re:Minds Us the End is Nowhere in Sight242 Total Shares