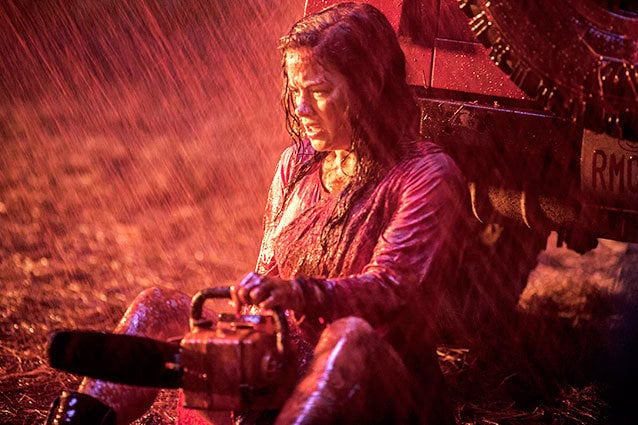 It was no secret that when news of an Evil Dead remake was in the works, the initial, “Why?” was then followed by outcries from beloved fans of the original 1981 cult classic. It was made clear by director Fede Alvarez in his directorial debut that this remake was not just a quick cash out, that it strove to capture the essence of a horror movie and much of what made the original so fantastic.

From the brutal cold opening and explosive first kill, Evil Dead establishes that this is a no-nonsense kind of horror movie. Then, after the sweeping aerial views, the film descends on five twenty something’s consisting of Olivia (Jessica Lucas), Eric (Lou Taylor Pucci), Natalie (Elizabeth Blackmore) and siblings Mia (Jane Levy) and David (Shiloh Fernandez) who form the emotional core of the film. They are the archetypical horror movie victims, each with their own flaws that play well into ensuing dangers. The film is a slow burn to the horror. The first act focuses on the personal demons between the characters; with convenient reasoning for being at the cabin, they are trying to help Mia deal with her cold turkey drug rehabilitation. However, after Eric, as “that guy,” reads the passage from the Necrinomicon, the violence, horror, and bloodlust begins.

And when it starts, it never lets up. Fans of the original and gruesome horror alike will find their bloodlust satisfied. From the numerous forms of self-mutilation via a multitude of sharp objects to the tree root scene, every instance of bloody horror is brutal and dares the audience to even try and look away. Levy does a brilliant job of playing the cackling, limb crunching, tongue-splitting demonic manipulator, as people around her turn on each other. The film is beautifully shot with dark hues and crimson viscera as well as great awareness of brutal close-ups. Evil Dead was made with practical effects, prosthetics, and tankers of prop blood. The avoidance of CG allows for the close-ups and vicious shots that make audiences cheer in macabre delight.

Although many may have reservations about remaking such a beloved classic, Alvarez no doubt satisfies. It was never a matter of living up to the original. There are still enough callbacks to the original like the Oldsmobile and the chainsaw, and of course, the before mentioned tree scene. This remake includes enough memorable elements to be recognized as a descendant of the original, but it adds enough to be fresh, new, and most importantly, fun. Horror movies can send all kinds of subversive messages. Remakes can go through all sorts of interpretations, but the Evil Dead succeeds in just being pure, relentless, bloody, fun.