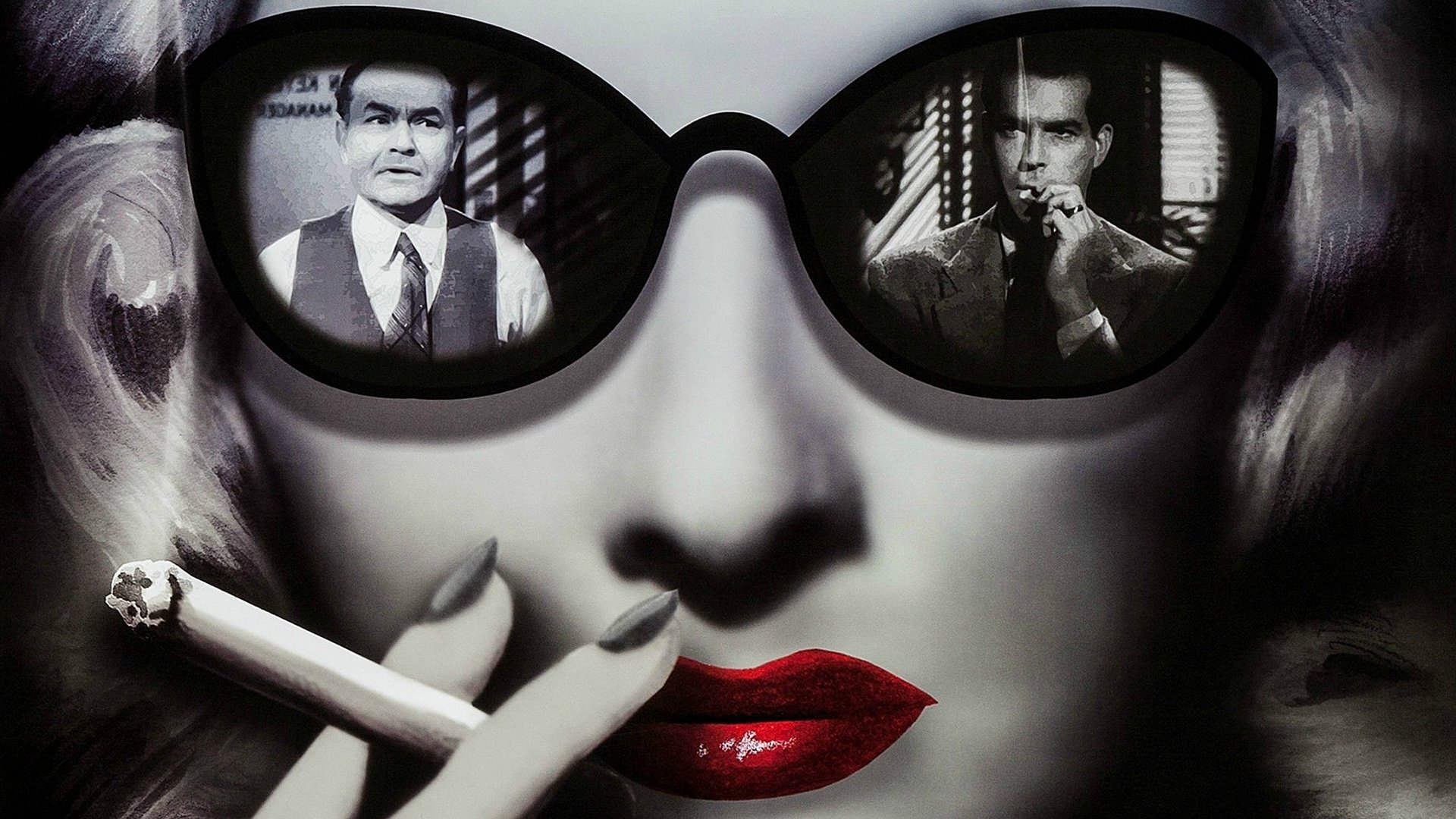 There are plenty of tough nuts to crack in the noir genre, but beneath those hardened exteriors usually lies some kind of rationale — some kind of motivation for why these people do the not-so-nice things that they do. Lust, greed, and even justice are common excuses that certainly explain much human behavior, but how does one determine what the hell everyone is thinking in 1944’s Double Indemnity, often considered the greatest example of this type of film? They’re all fishing, all fish, but though the typical incentives for murder in these sorts of stories are paid some cursory lip service, it doesn’t take too close an inspection to see that none of the film’s characters appear convincingly manipulated or totally hooked — at least not by the bait being tossed out by others. So no one is biting — but what are they all angling for?

“How could I have known that murder can sometimes smell like honeysuckle?”

For those who have somehow deprived themselves of the twisting plot, gloriously inky images, and razor-sharp dialogue, Double Indemnity portrays the sordid affair of reasonably successful insurance salesman Walter Neff (with “two ‘F’s, like in Philadelphia”) and sultry housewife Phyllis Dietrichson as they attempt to get away with offing her husband and collecting on a big accident policy payout. On their trail is a greyhound-like claims manager who smells a rat and suspects foul play, but can’t pinpoint the killer (because the guy he’s looking for is “too close. Right across the desk from ya”). Along the way, there are scenes of hilariously aggressive flirting and steamy Hays-Code-era passion, a pretty solid murder scheme involving a body double and a train ride, tense cat-and-mouse moments in a hallway and a grocery store, a cold-blooded implication involving the death of a character we never meet, plenty of duplicity and betrayal, and surprisingly, a somewhat tender relationship that you may not see coming.

It’s all fascinating stuff, but what makes it more so is the lack of urgency in the excuses for committing all the lies and murder. Walter claims in the opening scene that he “killed…for money, and a woman. And I didn’t get the money, and I didn’t get the woman.” That seems like clear motivation, but is any of it true? Upon their first meeting, he tells Mrs. Dietrichson that he does okay as an insurance salesman, and indeed he seems to be fairly well respected at his company. His boss and friend, Keyes, even recommends him a promotion to the Claims department. Sure, his apartment might not be a dame magnet, and he’s nowhere near affording “one of those California Spanish houses everyone was nuts about 10 or 15 years ago,” but he at no point makes any complaints about his earnings, and the chipper way in which he approaches his job suggests certain contentment.

Meanwhile, Phyllis initially claims that she hates her husband because he’s mean and won’t let her shop anymore (“every time I buy a dress or a pair of shoes, he yells his head off”), and also notes that the man’s life insurance all goes to his daughter. These are weak arguments for murder but they at least paint a hazily greedy character (perhaps sensing that thinness, she slyly bolsters her case, adding “I don’t want to kill him. I never did. Not even when he gets drunk and slaps my face”). But what does Phyllis want the money for? She never opines on the virtues of financial independence, nor confesses to any grand dream that only a big lump of dough could make true. In fact, once the deed is done, she rarely mentions the contested payout except when wanting to sue and instead treats the double indemnity claim as if it were merely a prize she was entitled to for victory.

No, money doesn’t appear to be a pressing issue — certainly not so urgent that it’s worth killing for — but what about love? Divorce wasn’t easy to obtain back in the 1940s, so killing one’s spouse to hook up with someone else you’re hot for certainly seems like an option that might cross a person’s mind (Strangers on a Train, anyone?). But though Double Indemnity portrays a lot of ‘feelings’ being declared through clenched jaws and bedroom eyes, each “baby” or “I love you” really gives off an impression of someone going through the motions of human affection in order to not be exposed as a psychopathic manipulator. The lack of emotion is a major undercurrent here, giving even scenes of supposed romance a sinister vibe, with characters saying what they think the other one wants to hear — dangling bait.

Sure, there’s no doubt about Walter’s lust — from the moment he catches sight of that shiny anklet, as well as the shapely leg attached to it, there’s a playful glint in his eye; it’s also obvious that Phyllis is aware of her allure, and enjoys the attention (“I wonder if you wonder.”). But after the murder, those longing looks and passionate embraces disappear almost as if they’ve never existed, replaced by cold shoulders, poker faces, and paranoid glances. The charge is gone from whatever this relationship was — but was it ever really there, or was that attraction merely a tool for Phyllis, and an excuse for Walter to convince himself that he had a reason to get involved? The lack of caring one iota about a future together suggests that those early flirtations are simply passing impulses — not enough to get anyone deeply hooked. Which perhaps explains why neither of them are.

Walter isn’t an idiot; from the beginning, he’s onto her schemes, and is smart enough to get out of there, but quick: “Whaddya think I was anyway? A guy that walks into a good-looking dame’s front parlor and says, ‘Good afternoon. I sell accident insurance to husbands. Have you got one that’s been around too long?’” Yet, he ultimately decides to help for his own reasons, causing Phyllis to mistakenly believe that she’s landed a whopper. Conversely, she lets Walter think that he’s the man with the plan, a step ahead of Keyes and in control; of course, he isn’t. With each deluded into thinking that they understand the other’s motives, there’s no end to the duplicity they’ll spout to get what they want — and that almost seems to include lying to themselves.

So, it turns out that love is not the answer after all. Any chance all this murder was done for some kind of cosmic justice? Well, there is definitely an element of comeuppance in Double Indemnity, but due to Hayes code stipulations, it has to be against the principals. The pair ultimately succumb to each other’s bullets — a fitting, fated closure for two people bound by a blood crime (“They may think it’s twice as safe because there are two of them. But it isn’t twice as safe. It’s ten times twice as dangerous”). Nevertheless, morality is not front and center here; even Keyes’ dogged pursuit of truth comes off as less a crusade than a vigorous fox hunt, and certainly, Mr. Dietrichson’s faults are never portrayed as convincingly evil enough to warrant such a fate.

Some people fish to eat, others for work, but one reason that many people cast their line into the water and spin the reel is simple: sport. It’s obvious fairly early on that both Walter and Phyllis are bored with their mundane lives; what better way to cure the doldrums than with a game? As Walter puts it, “In this business you can’t sleep for trying to figure out all the tricks they could pull on you. You’re like the guy behind the roulette wheel, watching the customers to make sure they don’t crook the house. And then one night, you get to thinking how you could crook the house yourself.” So perhaps Walter is proving something with this endeavor — engaging in competition. He is constantly told by Keyes that he’s smart, but also that it’s impossible to fool the claims manager’s instinct — his “little man.” Challenged accepted?

Meanwhile, Phyllis’ body language tells us everything we need to know about her state of interest in her situation in life. With her husband around she lounges around the parlor, seemingly sapped of strength, but suddenly comes alive when the outside opportunity appears in the form of a tall, dark, handsome salesman. It’s also implied that this isn’t the first time Mrs. Dietrichson has behaved badly. In fact, she may have stepped over the grave of a previous Mrs. Dietrichson in order to gain the title. Now, having reaped the rewards, she’s looking for the next thrill. And if she gets away with this one, there’s bound to be another. As Walter notes, “You got me to take care of your husband for ya. And then you get Zachetti to take care of Lola, maybe take care of me too. Then somebody else would have come along to take care of Zachetti for ya. That’s the way you operate, isn’t it, baby?”

Having watched Double Indemnity countless times over the years, I’m still not sure. But it’s likely that the mystery of why these people do what they do plays a significant role in the fascination with this crime story, as well as its lasting endurance (along with crackerjack filmmaking, of course). While the characters in so many other noirs commit dastardly deeds in the familiar and relatable pursuit of power, lust, or greed, the motivations of Walter and Phyllis remain largely ciphers — and they are endlessly watchable for it.

The most human moments of Double Indemnity come at the end, as Walter shares a tender moment with Keyes before presumably heading off to the electric chair, and Phyllis drops a bomb on the man she just put a bullet hole into: “No, I never loved you, Walter, not you or anybody else. I’m rotten to the heart. I used you just as you said. That’s all you ever meant to me. Until a minute ago, when I couldn’t fire that second shot. I never thought that could happen to me.” Whether or not that’s a sincerely heartfelt expression or more cynical angling, by the time audiences get to this culmination, they will likely already be hooked.

Indemnity (def): 1.) security or protection against a loss or other financial burden. 2.) security against or exemption from legal liability for one’s actions. 3.) a sum of money paid as compensation, especially a sum exacted by a victor in war as one condition of peace.

*SIDE NOTE: ‘Double Indemnity’ contains the only known footage of Raymond Chandler.