A good percentage of the best American chase films were released in the decade that brought us a new wave of rebellious, edgy filmmakers who put muscle cars in the spotlight, and directed realistic, fast-paced action sequences highlighted by the incredible stunt work from Hollywood daredevils. Cutting right to the chase, Dirty Mary Crazy Larry is high on extreme stunts and crazy car crashes, created in a time when CGI didn’t exist. Dirty Mary, Crazy Larry remains one of the best in the genre: the stunts are extreme, the humor is dark, and the cars are awesome.

Released in 1974, Dirty Mary Crazy Larry is a ridiculous fun, heist picture driven by tough-guy dialogue, male posturing and a somewhat familiar premise. Adapted from Richard Unekis novel The Chase, the film follows a stock car driver named Larry (Peter Fonda) and his friend and mechanic Deke (Adam Roarke) – a couple of young, down-on-their-luck race car enthusiasts whose reckless behavior has caused them a string of bad luck. The two men need money if they’re to buy a new car and get back in the game, and so they map out a plan to rob up a grocery store. The heist goes as planned, except for one unexpected twist – Larry’s girl Mary (Susan George) decides to tag along for the getaway ride. The trio spend the rest of the running time, attempting to outrun the county police, led by badass lawman Franklin (Vic Morrow).

Much loved by action film fans for its death-defying stunt work, Dirty Mary Crazy Larry was a surprise box-office hit in 1974, grossing nearly 30 million dollars in its initial release, and overtaking The Poseidon Adventure for first place at the box office. The script is the last thing on the filmmaker’s mind but beneath the paper thin plot lies a cynical commentary on the aftermath of the 60’s era of Peace and Love. The strain of nihilism runs deep throughout the film, and nowhere more so than the ending. There’s no coincidence that the film not only stars Fonda but recalls Easy Rider in its closing scene.

British director John Hough, who began work as a director for 60s TV show The Avengers, directed a wide variety of mostly genre movies over the last 30 years (the most notable being Hammer’s Twins of Evil, The Legend of Hell House and Incubus). But Dirty Mary Crazy Larry might just be his most beloved film thanks to the spectacular chases and multi-vehicle collisions deftly staged by stunt coordinator Al Wyatt. Drenched with testosterone, more than a third of the running time is devoted to the chase. Once the trio changes to their new car, a slick lime coloured Dodge Charger, it’s non-stop action.

Director John Hough was at his peak when he made this. The most impressive aspect of the film is knowing that these action scenes were staged in real time, at actual speeds, without speeding up the film stock or relying on the benefit of modern post production editing suites. The cars are really dodging buses, leaping over drawbridges and maneuvering between semi-trucks at full speed. The stunts here, put anything you’ll find in modern CG-enhanced films to shame. Fonda in the midst of his heavy pot smoking phase, performed much of the driving himself. Amidst the high speed chases, crashes, and near-misses is a low-level helicopter pursuit that is absolutely thrilling. DMCL boasts incredible action scenes that are all varied and equally exciting and crammed with clean, well-choreographed shots, as most of the action was filmed in one take. The stunt that ends this movie will forever be etched in your memory.

Peter Fonda an icon of the 60’s, and one of cinema’s most beloved anti-heroes shines due to his remarkable ability to deliver witty dialogue as fast as the ridiculous speeds he travels at. His best lines are pop culture references such: “Remember Robert Mitchum in Thunder Road? I’m gonna powder his face.” Fonda sporting aviator shades and Susan George wearing a halter-top share great chemistry together and Vic Morrow is entertaining as the rogue cop chasing them down. Meanwhile Adam Roarke convincingly plays the recovering alcoholic and both Roddy McDowall and legendary Kenneth Tobey make small appearances.

What the film skimps on in terms plot, it makes up for in its obsessions with speed, violence, and intensity. A spiritual predecessor to the likes of Smokey and the Bandit and Cannonball Run, Dirty Mary Crazy Larry is a quintessential 70’s movie.  This full-throttled, bombastic heist flick is a blast to watch but also sends a message. Just when the jaded trio of ramblers appear to have finally made a clean getaway, and optimism for a better future seeps in, life stops them dead in their tracks.

Larry responds to authority with his middle finger waving, and I respond in equal ways to the negative reviews from critics who, as always, missed the goddam point. 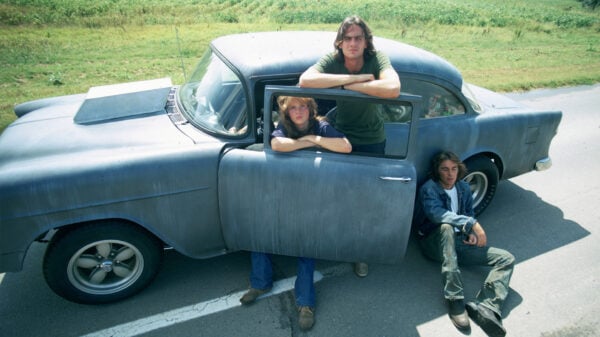 50 Years Later: Two-Lane Blacktop James Taylor is The Driver. Warren Oates is GTO. Laurie Bird is The Girl. Dennis Wilson is The Mechanic....