Humans are beasts ruled by emotion and self-preservation. Deep within us is an ever-present sense of survival, a raw, primal, and selfish notion that we matter. Being alive is not simply a privilege, it’s a god-given right. Our hearts beat, our blood flows; we know we exist, here and now, flesh and blood. But surely, there must be more to being human than living. Devilman Crybaby knows there is.

The Ancient Greeks held the dramatic arts in high regard for its ability to elicit catharsis within its spectators. Catharsis acts as a powerful purging of emotions that leaves people renewed and reinvigorated. To this day, art and media seek to resonate with its audience in memorable and meaningful ways. Star Wars tapped into a common mythology to tell “its story of swashbuckling adventure, larger-than-life personalities, and far-off fantastic worlds.” Devilman Crybaby does much the same by digging into forces that are raw, primal, and utterly human.

Devilman Crybaby presents its story through broad, sweeping strokes in a classic tragedy of good vs. evil. Akira Fudo is an average high school boy who finds himself endowed with the strength of a powerful demon. In order to defend his loved ones, he lets loose these newfound unholy abilities to wreak havoc upon his enemies.

Yet time and time again, he claims he is no demon. Within his unbridled rage and fury beats the heart of a human. Akira’s stalwart convictions are unwavering in the face of undeniable evil. Demons abound, ripping, tearing, and snarling. Humanity’s feeble semblance of order erodes into nothing, yet Akira stands tall. His sheer strength of will and love for humans make him endearing, terrifying, and inspiring all at once.

Humans are just as capable of endless evil as they are overwhelming good. Devilman Crybaby leaves no room for subtlety. It places its narrative within a lofty realm of clashing ideologies over what defines humanity, twisting and turning in a veritable storm of color and emotion.

As if taking pages out of Hotline Miami, ‘Devilman Crybaby’ indulges in
Tarantino-esque levels of belligerent depravity.

Devilman Crybaby begins as a power fantasy, a superhero origin story where Akira’s feats of strength and vigor inspire envious awe. Overnight, he transforms from a stammering wallflower into a smooth-talking, swaggering whirlwind of testosterone. His deeds shine against a backdrop of the mundane and pedestrian; the show revels in his cocksure attitude and destructive machismo.

His fantasy, however, is short-lived. Akira quickly comes to grips with the truth of the world, where demons are real and humans are corruptible. Fever-dream sequences of gratuitous violence and eroticism pulse to a neon synthwave beat. As if taking pages out of Hotline Miami, Devilman Crybaby indulges in Tarantino-esque levels of belligerent depravity.

Director Masaaki Yuasa uses the full breadth of his dynamically fluid and cartoony style to elevate the outlandish, hedonistic, and oftentimes campy aspects of the show. A review of Yuasa’s work on the 1992 animated movie Chibi Maruko-chan: My Favorite Song goes in-depth on what defines his unique style:

“The great thing about [Yuasa’s work] is that it’s exciting to look at in both a graphic and motion sense. A lot of times, you’ll get one or the other, where the stylized background overwhelms the actual animation. But that’s not the case with this. It’s got interesting design, but it’s also full of shameless cartoony movement… the characters and backgrounds are totally unified. In a lot of cartoons you’ll have flat, sort of abstract characters contrasting against realistic detailed background art. But here, there’s literally no distinction. They’re both animated most of the time. It’s like a celebration of pure cartoons.” (Masaaki Yuasa’s Early Career: A Spotlight on Chibi Maruko Chan My Favorite Song)

Yuasa’s distinct style highlights the dichotomy of everyday life and the corrupting influence of demons. His stark sense of color and motion brings these two worlds into conflict: pastel hues paint a nostalgic picture of meandering normality, while violent flashes of neon burst onto indulgent scenes of brutality and sex.

‘Devilman Crybaby’ is a story about humanity at its best and worst.

As the series progresses and demonic corruption seeps more heavily out of the cracks, morbid scenes of violence overwhelm reality. The soft chromatic palette of Akira’s daily life disintegrates into a perversion of monsters, demonic and human. Yet within this bleak pit of despair, slivers of hope shine through. Akira proudly and defiantly claims that he is not a demon. He possesses the body of one, but still his human heart beats: he is a Devilman.

Getting Closer Through Distance

“Verfremdungseffekt”, a term first coined by playwright Bertolt Brecht, is a concept in performing arts where strange situations highlight the familiar and relatable. Amidst abstract imagery, where rules and structure have no place, the human mind will latch onto any semblance of normality. Akira Fudo’s commitment to humanity anchors both himself and the audience to the comfort of the mundane, while operating within the stylized reality of Devilman Crybaby.

Yuasa takes his audience on a journey through the strange and unknown, shapes and colors swirling by in a mad rush of emotions.

Masaaki Yuasa’s distinct visual flair highlights the alien and abstract, which forces his audience to grasp onto the familiar. Beneath the flash and style, there’s a simple story of people wanting to protect what they love. Even as the world burns, Akira and his comrades cling to their humanity. Their cherished relationships and memories remind them what they fight for, what it means to be human.

To be human is to be capable of overwhelming good and evil. Devilman Crybaby abounds with a wide spectrum of powerful emotions and doesn’t shy away from the uncomfortable. Yuasa takes his audience on a journey through the strange and unknown, shapes and colors swirling by in a mad rush of emotions. A steady beat pulses, a tempo, a sign that within the chaos beats the heart of humanity.

Devilman Crybaby is available for streaming on Netflix. 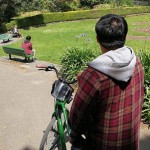