Spoilers for Darling in the Franxx below

Franxx has been many things throughout its run, from a campy metaphor for puberty to an endearing character-driven coming-of-age story. What I never expected it to be, however, was disappointing.

I don’t normally use that word to describe media, as I often temper my expectations going in. Darling in the Franxx is a different story. I would be willing to be more forgiving of how the show ended were it not for how much I enjoyed the first two thirds.

What went wrong? How did Trigger and A-1 set their show up for success and botch it completely? 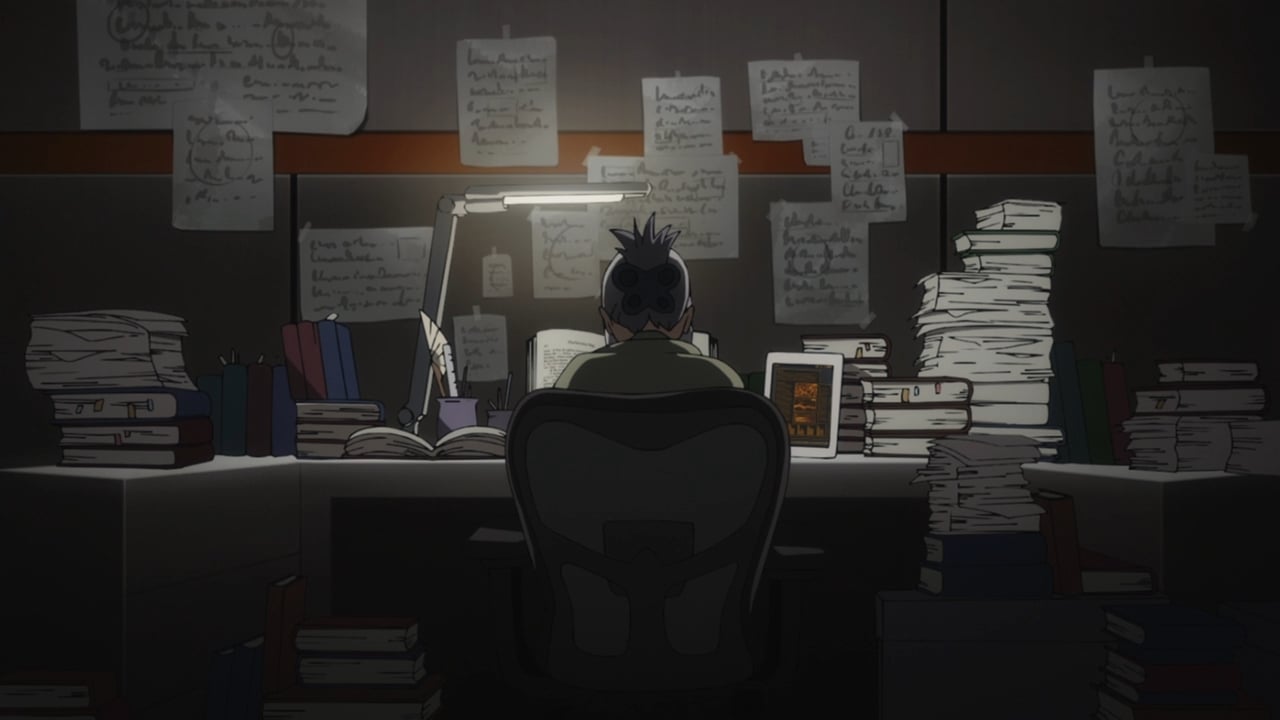 Fuck It, We’re Going to Space

People point to Episode 19 as the moment when the series truly starts to nosedive, and I’m inclined to agree. As with many problems that the last segment of Franxx had, they were merely indicative of a larger issue.

Escalation for the sake of escalation works depending on the context, but Trigger consistently drops the ball in the home stretch. This is a problem that’s plagued so many of Trigger’s shows before Franxx. The final buildup and climax amounted to nothing more than “We have to stop the aliens”.

That’s not to say it’s bad. Gurren Lagann, regardless of its own issues, worked fantastically with its over-the-top space fights and physics-defying action. It was par for the course for how characters and narrative had been developing. It made sense.

Franxx does anything but. There lies a severe disconnect between the first two thirds and the last. By making the antagonists a Borg-like alien species out to subjugate all life under their control, the show removed agency from Squad 13.

Fans had long speculated that the last act of the series would involve a rebellion arc. The kids would realize that they had the power to change their lives and rise up against the adults. However, the sudden invasion of ancient space aliens completely ruined that prospect.

No longer were the kids dictating the story’s tempo. All of their actions were simply reactionary, resulting in a frustratingly floaty and non-committal narrative. Nothing exemplifies this better than how the final battle gets resolved. By linking hands and sending Hiro and Zero Two their spirit energy, Squad 13 saves the day with the power of friendship.

I wish I were kidding. 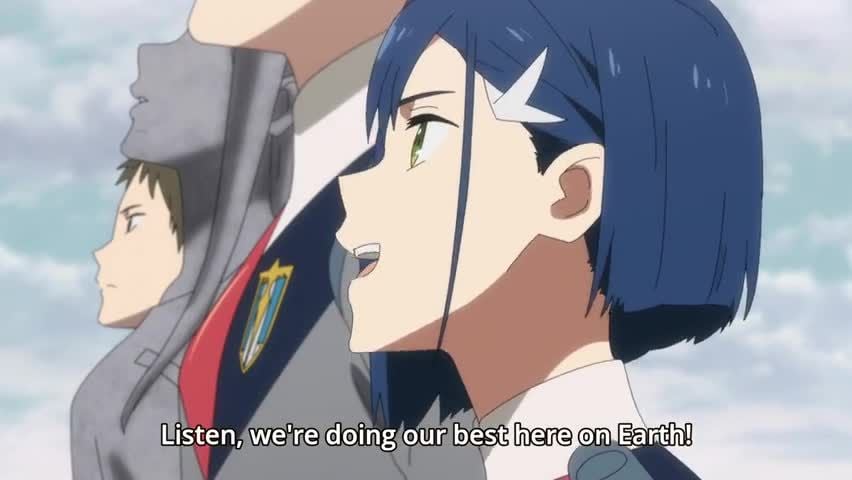 This is Not My Beautiful Waifu

Zero Two, easily one of the best aspects of Franxx, had her character completely neutered by the end of the series. Although her’s and Hiro’s relationship had served as the driving force behind the show, it distilled down to an aggravatingly shallow level.

After 21 episodes of growing attached, the audience never again sees the sweet and sassy dino-girl who gave her scenes so much life. By the series’ end, Zero Two had devolved into generic waifu-bait material. Gone was Hiro’s energetic foil and a genuinely endearing relationship. She simply smiles and expresses her love for Hiro and their friends. We’re left with a cliched set of romantic platitudes that resolves in the worst way possible: reincarnation.

Unless you take the time to properly set it up, reincarnation is never a good plot device. It’s cheap, lazy, and only serves to undermine whatever sacrifices your characters endured. In Hiro and Zero Two’s case, it’s even worse because of how it’s done.

We never see them go through an excitingly choreographed fight where they’re perfectly in sync. No, instead what we’re subjected to is watching them slowly blow up and float back to earth as space ghosts, ending up reincarnated hundreds of years later as kids who magically cross paths. 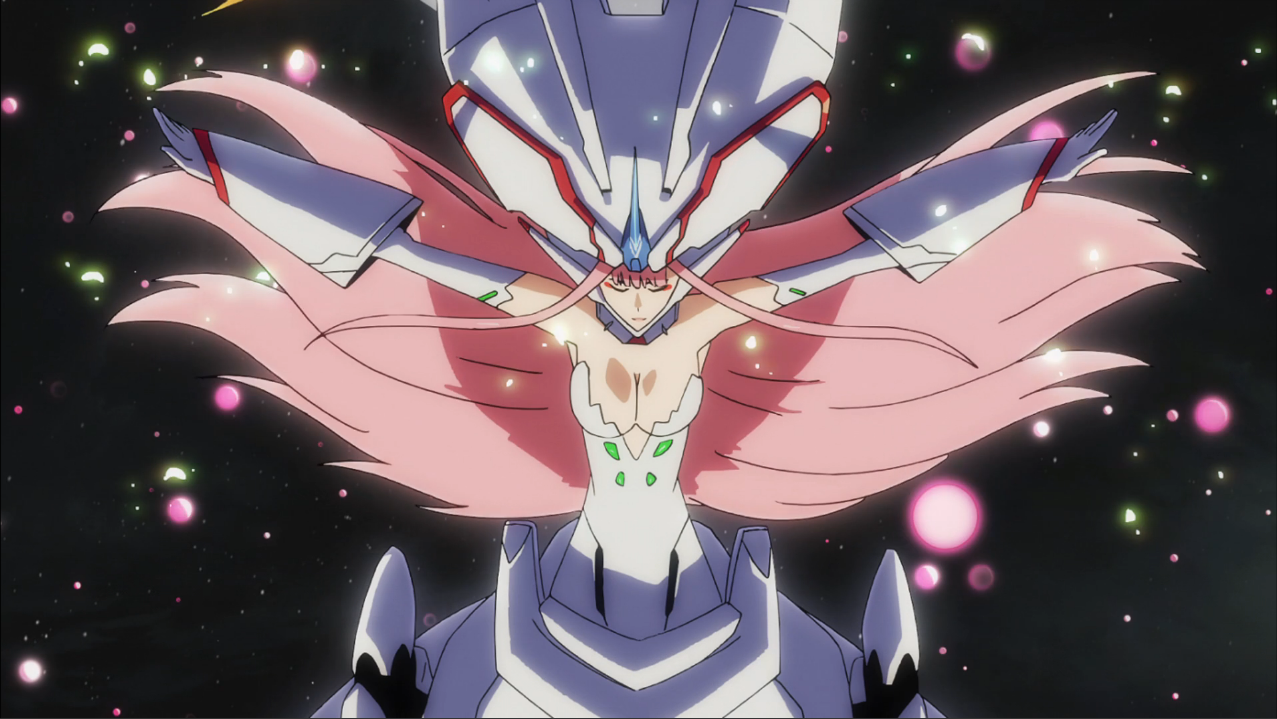 What a Fine Mess We Have

Aliens and character assassination are just symptoms of a larger problem that plagues Franxx: sloppy storytelling. All of these elements work well enough in a vacuum, or even in another show. The issue with how they’re used in Franxx is that the buildup is completely divorced from the narrative’s eventual direction.

If you set your story up with a set of rules and expectations, you better damn well stick to them. Franxx was a fun show to get into because of its characters, use of fanservice, and over-the-top style. After Episode 16, that distinct flavor gradually wore off, leaving us with a bland, milquetoast show. No more suggestive metaphors, grand worldbuilding, or dynamic characters.

That’s the most frustrating part of it all. I don’t hate this show. At one point, I even loved it. Darling in the Franxx started off as something, fun, fresh, and exciting. Yet, by the end of the series it had eschewed everything that made it great and settled for the easy way out. I’m disappointed in what this show chose to be, not what it could have been.

Rumors have circulated that Franxx’s production experienced some trouble, including rushed deadlines and cut episodes. Supposedly, the manga is taking a different direction from the anime by reordering scenes and including missing content. As a direct collaboration between the series creator and the manga artist, it may yet give the kids the ending they deserve. 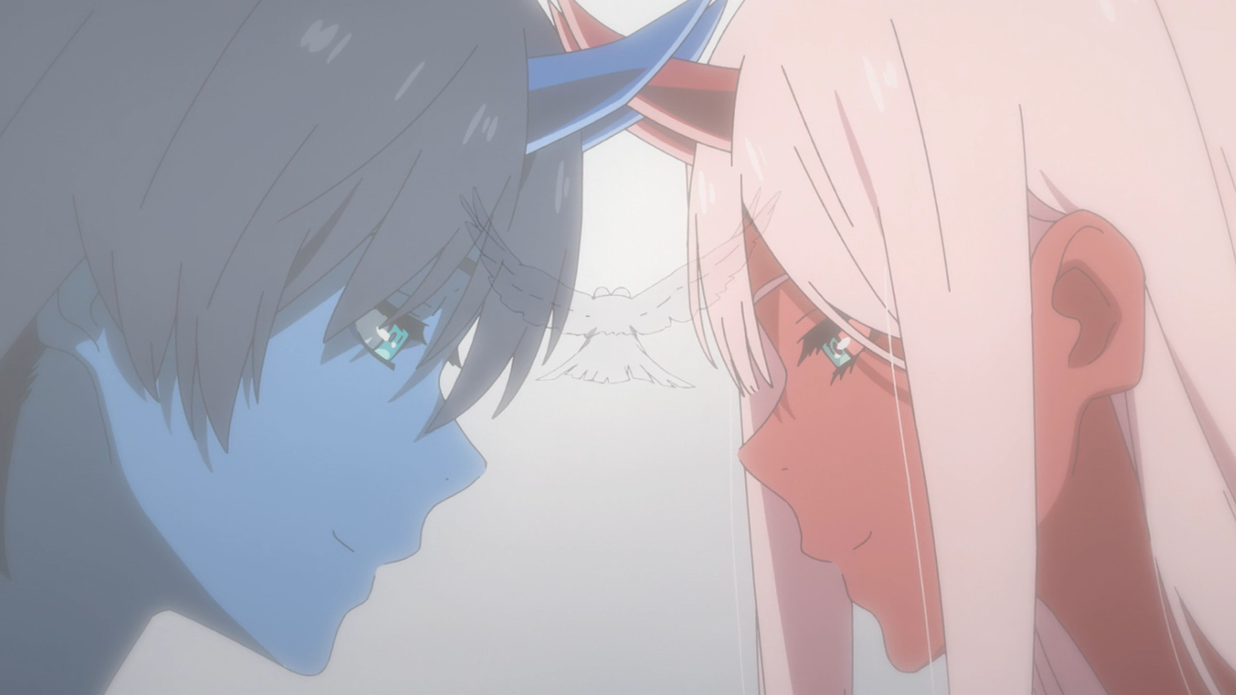