Matt Murdock Rises From the Ashes In A Contemplative ‘Daredevil’

Battered, bruised, and thoroughly broken, Matt Murdock slowly rises from the ashes of New York’s underbelly in “Resurrection”, Daredevil‘s return after a two and a half year absence. However, when season three of Daredevil begins is nowhere near where “A Cold Day In Hell’s Kitchen” ended; for better or worse, Daredevil’s long-running confrontation with The Hand finally reached its conclusion at the end of The Defenders first season, taking all the plot sucking mystical ninja nonsense along with it (or so we can only hope). Matt’s broken body and lost faith are more than reflective of his own mental state in “Resurrection”; after being crippled by the underwhelming stories of The Hand for nearly three years of Marvel/Netflix stories, it almost feels like Daredevil has lost faith in itself.

So much of “Resurrection” feels like Daredevil rediscovering its own rhythms, which makes for an obvious parallel to the narrative thrust of the story, following Matt’s recovery from his suicidal mission to try and save Elektra as the Midland Circle building fell around them. Disillusioned by the loss of his senses, the loss of Elektra (though we all know she’s still around, right?), and the absolute loss of faith in the God he thought gave him a purpose, Matt spends most of his time in “Resurrection” in the shadows of his own world, his identity shattered by the constant fighting against The Hand, an endless series of bloody encounters that left him alone in the world, his mentor and lover dead, isolated from his best friends and now, lost without the ability to sense the world around him. Matt Murdock is absolutely and thoroughly broken, and “Resurrection” has no qualms nailing that point home again and again. 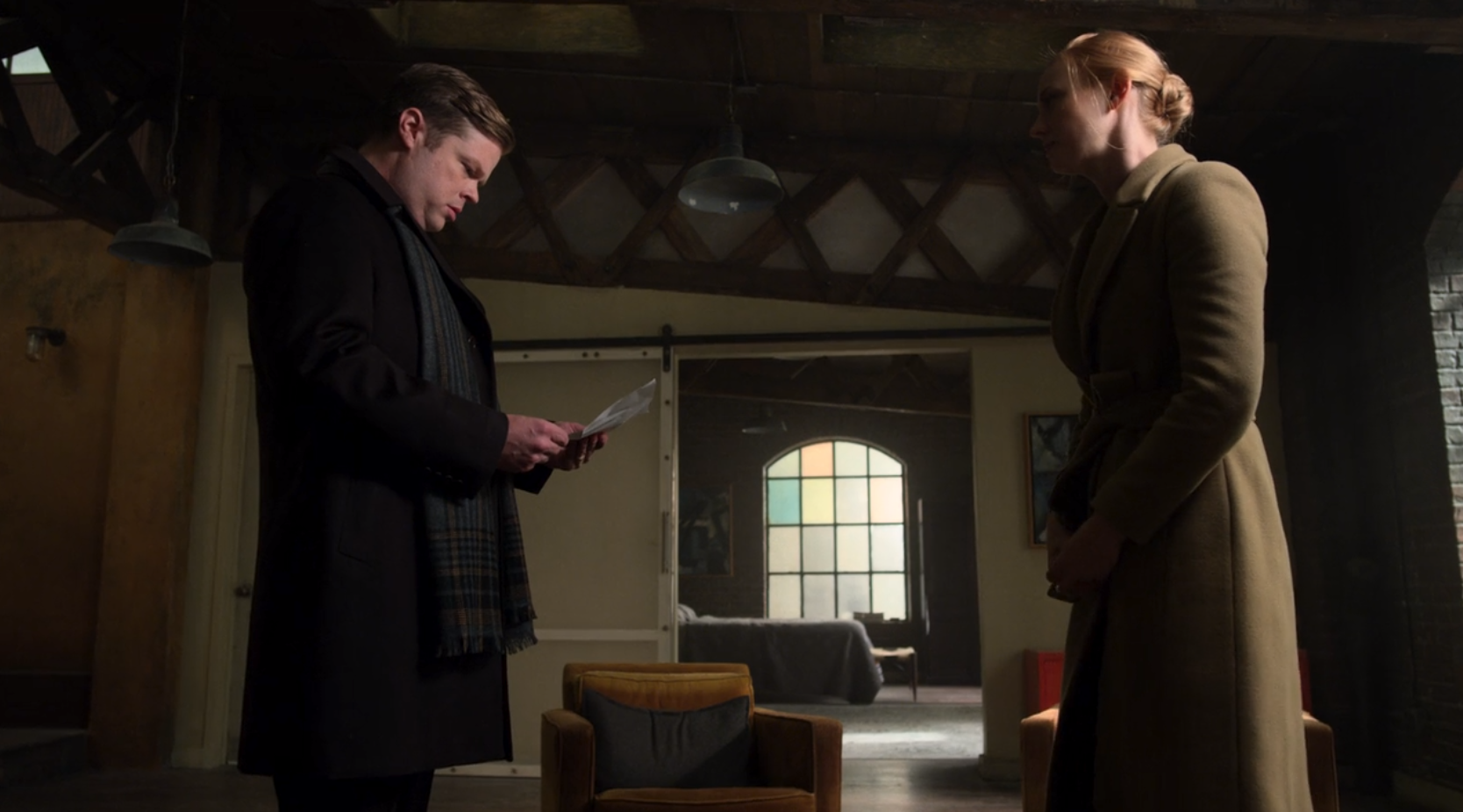 However, as his friendship with Sister Maggie begins to develop, “Resurrection” moves past the misery porn, and seizes the opportunity to once again re-establish its voice. For the first time in a long time, Daredevil is freed from the machinations of the Five Fingers, and “Resurrection” spends much of the episode condensing the remaining pieces of Daredevil‘s world back to Hell’s Kitchen, grasping the exciting proposition of a clean slate. It’s something the character of Daredevil desperately needs: since the end of Daredevil‘s fantastic first season, the character’s been mired in the always disappointing stories of The Hand, dulling the impact of Matt’s journey as the plot grew infinitely larger through season two of Daredevil (don’t forget the entire patched-on Punisher arc, to further muddy the waters), losing sight of what made the first season such a distinctly powerful piece of work. Ideas of faith and purpose were lost to chasing around ninjas and semi-immortal martial arts masters, mistaking the power of Daredevil‘s brutality, and manipulating its core ideas into something more bitter, more outlandish, and thoroughly less satisfying. As Matt himself says to Maggie, when you let people in, you pay the price – while he was talking about how it compromised himself, it also speaks to what happened to the show as its ambitions were co-opted for the larger Defenders project.

While “Resurrection” definitely isn’t as heavy thematically as those first season Daredevil episodes, it still spends a bit of time letting its setting – the basement of a Hell’s Kitchen church – gives ample room for Matt to stew over his existential crises, his hollow senses mirrored in the dark, lifeless laundry room he calls home. Speaking to Maggie, he details the story of Job and the terrible costs his faith cost him in his life; faced with the loss of Daredevil, the very identity he said he couldn’t live without during The Defenders, he can’t reconcile how insignificant and meaningless his sacrifices feel. In a telling moment, he calls Job a “pussy”, reflecting his own internal struggle: if he couldn’t survive as Job did when God’s protection was removed, how could he be worthy of being one of “God’s soldiers”? 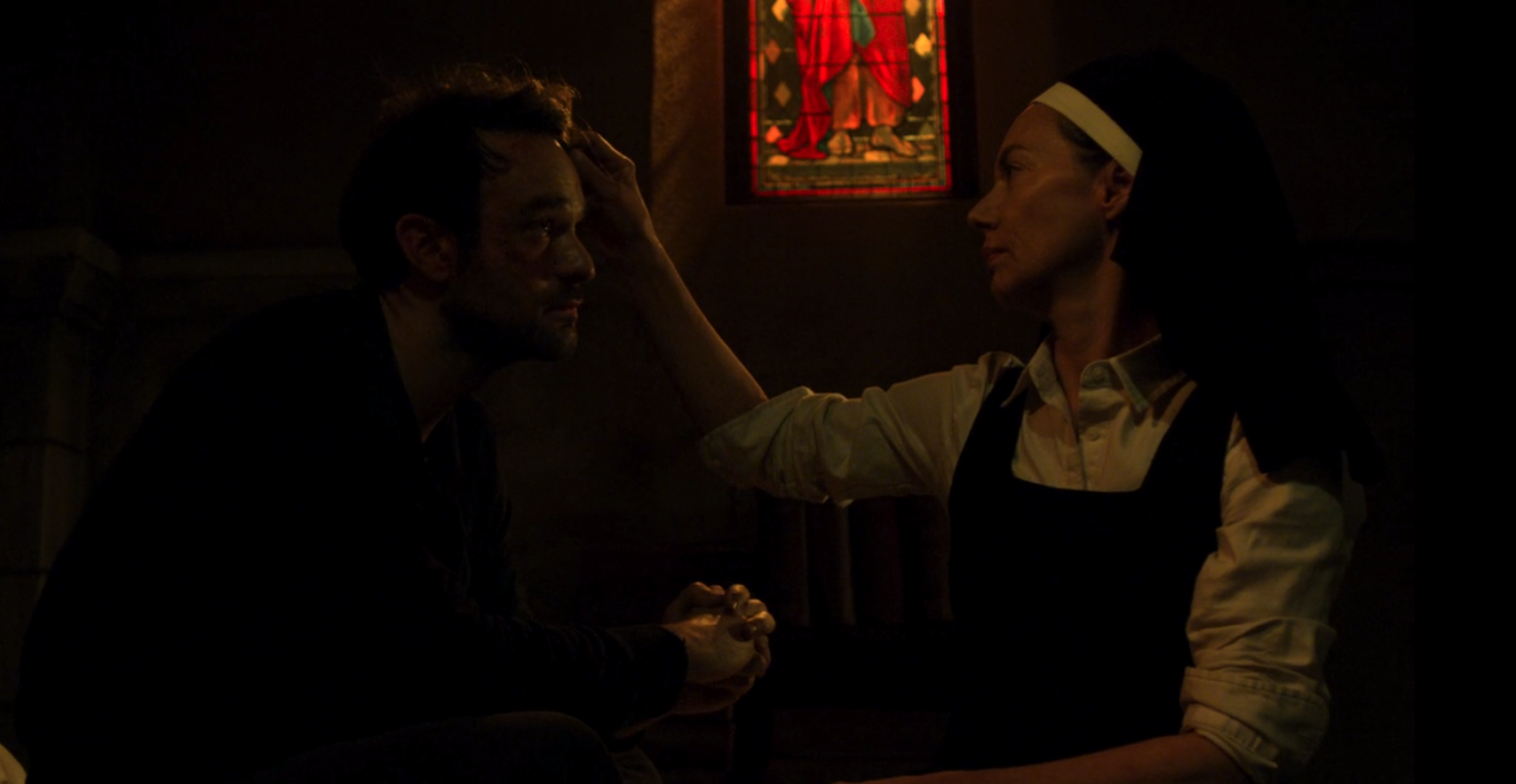 Matt’s crisis of faith is not just a simple moment of ego – though Maggie is right when she sarcastically calling him “brave” for hiding in a basement for months – it’s a genuine crisis he faces alone, the support systems he’s had since become the Devil of Hell’s Kitchen no longer there to steer him back to the man, the one who wears suits to fight the injustices of his city, and enjoys beers at Josie’s afterwards. And that’s why Matt’s first mission on the street escalates from fun warm-up fight to near suicidal defeat; as he’s getting his organs hammered with punches, Matt’s smile reveals the desperation he feels. That notion is sealed when he tosses a lead pipe to one of the men he was fighting off, asking for God to forgive him while waiting for the assailant to strike him down, once and for all.

Unfortunately, Matt forgets one of the important tenets of his own faith: those who believe, understand they do not determine your own suffering or fate, instead putting trust in their god to be just and fair with his judgments, be they temporary or final. Like Job, Matt feels like he is a theological experiment of sorts: however, Matt makes no attempts to leave room for interpretation about his lack of faith. That lack of faith, ultimately, extends to himself, and it quietly leads “Resurrection” to a dark place, as Matt struggles to reconcile with his own failures, mental and physical, deciding that in front of this cruel, silent god, he’d “rather die as the Devil, than live as Matt Murdock.” 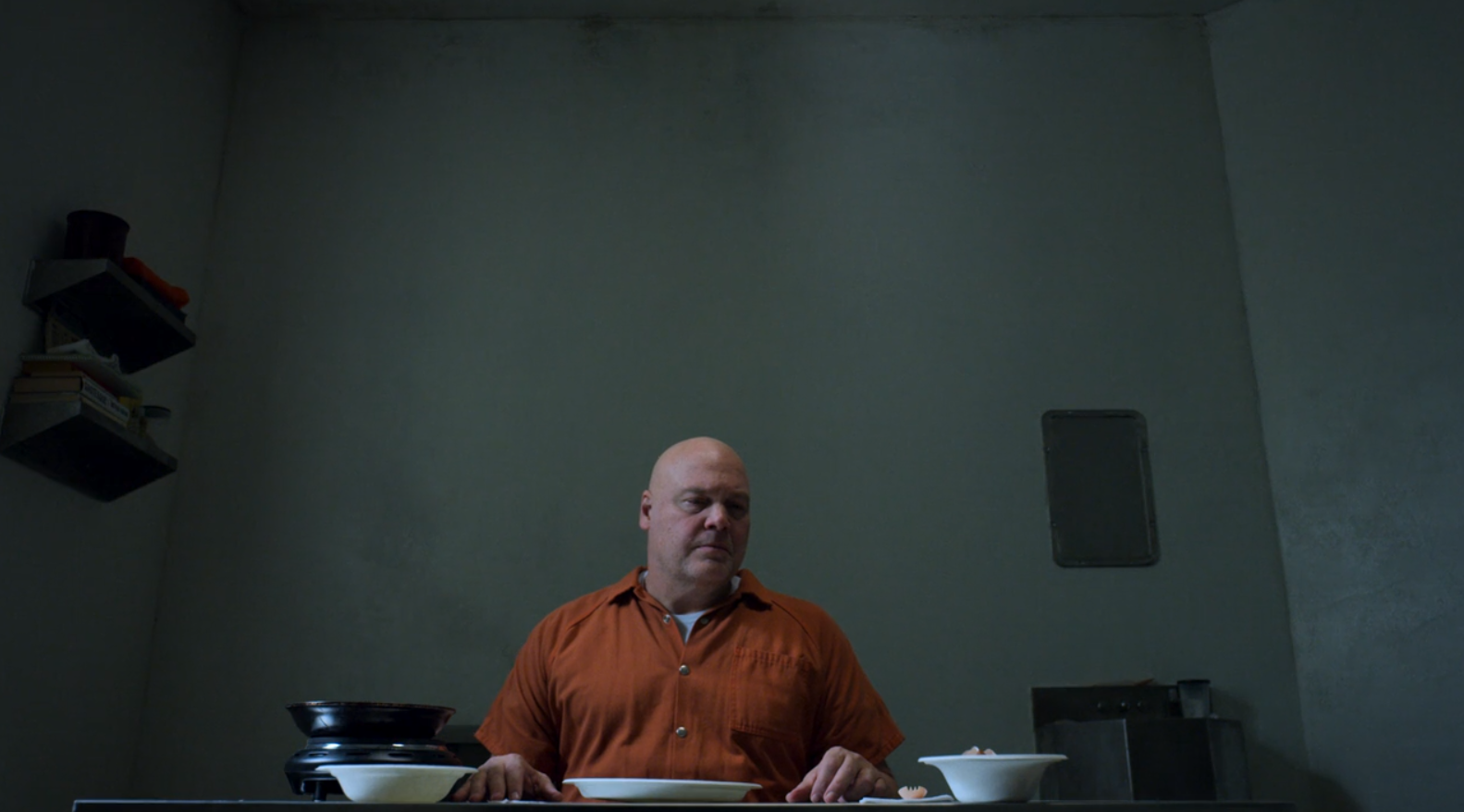 Matt’s lack of faith, however, is not rewarded: the easy release of death is denied him at the end of the episode, his god seemingly not accepting his apology for his many self-perceived failures. That denial pervades every story of the episode, sprawling out from Matt’s holy underground bunker, to Karen and Foggy as they struggle to keep hope that he’s alive, and Fisk, wondering if his fiancee, gone into hiding overseas, is still by his side. The non-Matt stories are decidedly not major components of “Resurrection”, but their presence is important in paralleling the ideas found in Matt’s struggles. Faith requires absolute devotion, and the other players of Daredevil are given no exemption to this – including newcomer Ray Nadeem, whose allegiance to his FBI position goes unrewarded, deemed unworthy of promotion or a raise because of a bad FICO score, itself a byproduct of Dex spending all his money to keep his cancer-ridden sister-in-law alive.

The tests Job faces at the hands of God (with the assist of the devil) are authoritarian exercises in testing loyalty; as the many characters of Daredevil reckon with the truths they don’t want to face, the show itself comes to terms with its own failures in recent years. Elektra and Gao may linger in the background, but Daredevil’s allegiance to telling stories about The Hand, Stick, and the Black Sky was not rewarded (in any sense: The Defenders was the least-viewed series of Marvel’s Netflix run, which includes the laughably bad first season of Iron Fist). Rising from the darkness, “Resurrection” posits that the only path to redemption, for itself and its characters, is perhaps through rebirth itself, rising from the ashes and finding true purpose in their actions. through the very things that make them whole. For those like Fisk willing to compromise to achieve those goals, the end may not be so kind – but for those willing to give themselves to those they love and what they believe in, Daredevil posits that at the very least, opportunities for redemption are right in front of us, even when we can’t see them.

– an entire Daredevil episode without a long fight sequence? This already feels like a very different show. Under the tutelage of Erik Oleson, I’m interested to see what direction the show takes this season – even more so considering the interesting paths of the last major project I saw his work in, the tumultuous, heavy-handed third season of Arrow.

– This season of Daredevil adapts Frank Miller’s mostly fantastic run of Born Again; without ruining anything that appears might happen, I’m very glad this story doesn’t catalyze with a broken, heroin-addicted Karen suffering in Mexico.

– Blood and ash, pills and liquor… at this point, there’s nothing Matt could drown himself in to escape his tormented soul.

– There’s a conversation Ray has with his wife that didn’t have subtitles in the screeners, but it appears they do not have any money.

– Even though “Resurrection” doesn’t really have any signature fight scenes, there’s certainly enough squeamish moments of bloodshed, led by Matt cleaning out his nose with a Neti pot, which causes blood to pour out of his mouth.

– Sounds like Wilson Fisk is ready to get out of jail – this should be fun!

– It’s funny how quickly Matt (and the FBI) forgot about Punisher, isn’t it?

– I really hope when Elektra inevitably returns, she’s killed everyone left in The Hand so we never have to hear about them (or The Chaste) again. Stick was always fun for a good time, but good riddance to all that bullshit.

– Don’t promise your kids a pool they’ll never get!

– Welcome back to Hell’s Kitchen, and welcome to my Daredevil reviews of season three!

These Pixel Art Versions of the Super Smash...

The Infamous Wess Dance from Mother 3 Gets...

‘RimWorld’ Review: The Edge of Perfect