Although last week’s episode features actual flashbacks from season one, it’s “Please” that almost feels like a clip show, attempting to unwind the damage of the last two years of Daredevil stories and refocus on what made characters interesting in the first place, with a series of focused mini-vignettes on each main character. Most of these don’t lead to the most exciting, driven episode of Daredevil, but much of what happens in “Please” feels necessary to set the table for the season ahead: doubling down on some of the show’s earliest ideas, in what feels like a major, welcome narrative reset for the show.

“Resurrection” was at least able to use Matt’s recovery as a way to inch the larger story of Daredevil forward: save for the botched assassination of Wilson Fisk at the episode’s climax, there isn’t much in “Please” concerned with plot development. Rather, the hour feels conceived entirely to re-familiarize the audience with each main character’s arc, focusing on things like Foggy’s family legacy, Karen’s journalistic skills, and Matt’s attempts to re-embrace the anger that’s defined him as a person for so long. It’s been a long journey for most of these characters since The Hand showed up, and “Please” uses that ill-conceived narrative roller coaster as a framing device for the episode, which propels mostly mundane material into something much more powerful. 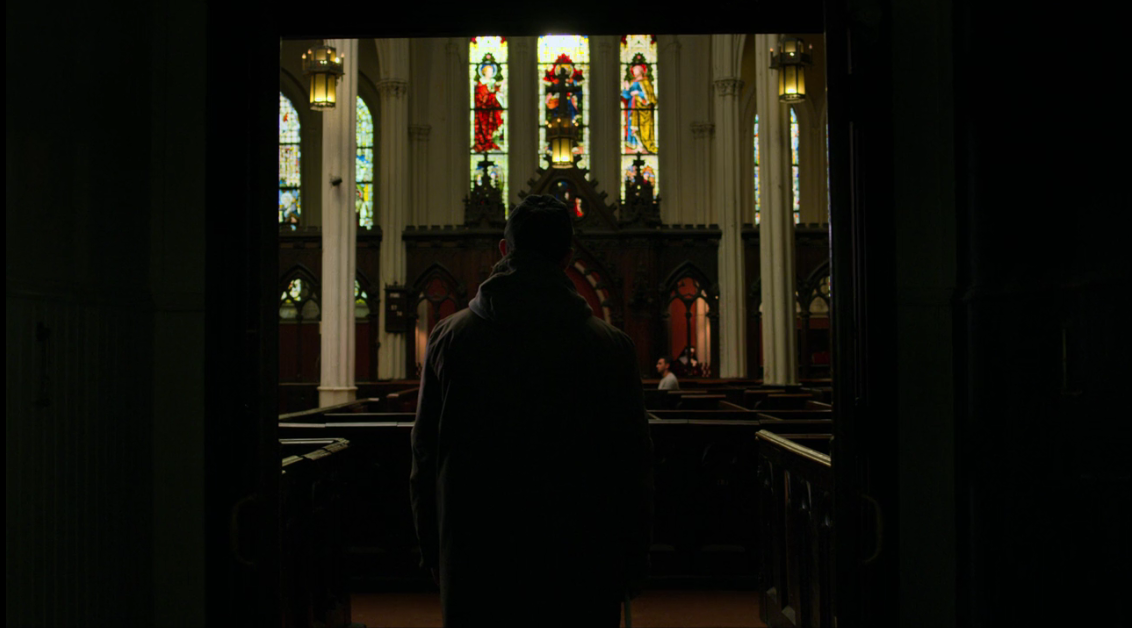 The central conceit of “Please” is forcing its characters to reflect on where they’ve gone in life: at the core of the episode is Foggy’s family holiday gathering, where we learn just how proud the Nelson’s are of their boy, and just how disappointed Foggy is in himself, his swanky law job nowhere near the life he thought he’d lead at Murdock & Nelson, the infamous law firm torn down in its infancy way back at the end of season one. “Please” is not subtle about this reflection, as Foggy expresses that disappointment, talking about the future he dreamed for himself, and how hollow his life feels without that goal accomplished, that dream compromised for so many different, most unavoidable reasons. When Foggy learns his father is going to have to retire, Foggy almost feels responsible, as if he abandoned his family for a dream that wasn’t meant to come true – and even though he’s got the high-paying job and all the fancy suits that go with it now, he feels helpless he couldn’t help his family – or in a more direct way to the narrative, he couldn’t help Matt stay alive.

More interesting than Foggy’s story itself, is how those ideas blossom in the episodes, as other characters are faced with the same painful recollection of dreams: Matt talks to his pastor about how he thought he heard God’s voice in those seeking help through prayer; Karen talks to a real estate heiress about how little of her life in New York was what she wanted it to be, or even thought it could be at any given point. There’s often nothing more disappointing than feeling like you’ve steered your life in the wrong direction, and realizing there’s no way to go back: as much as Karen and Foggy miss the camaraderie when Matt was around, those days are long gone. For all Foggy knows, Matt is still dead – after all, he tells Karen, wouldn’t Matt have found them already if he was still alive, tying this episode’s ideas about legacy into the premiere’s ruminations on faith, raising a number of interesting questions for the season to follow. 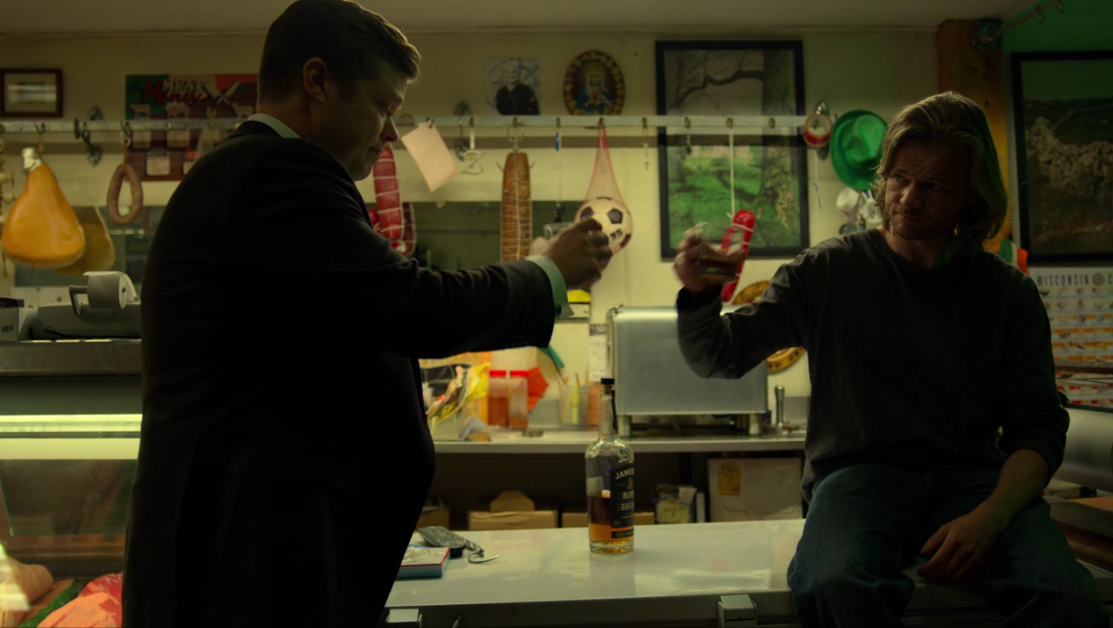 Even more intriguing is how Daredevil uses Wilson’s plight as FBI snitch as a culmination of these ideas, expressing some of the darker questions about legacy, and the path one walks to achieve it (or at least, their own perception of what their legacy should be). Wilson, a man who defined his entire life before Vanessa on his ability to consolidate power under himself, certainly didn’t see his path to freedom as one of a snitch selling out business associates to protect a woman, who for all he knows, could’ve already turned against him. Unlike most characters in the season premiere, Wilson is willing to have faith in forces unseen – but at what cost to his legacy as the kingpin of Hell’s Kitchen?

What Daredevil posits, is that we don’t know which choices or dreams in life are the right ones, often until it’s almost too late: and if we hold onto allegiances to false prophecies, particularly those of our own making, it can be the very thing that undoes us. Matt can be pissed at God, flipping him the finger by going out again as Daredevil, despite his extremely dulled senses, but Sister Maggie suggests this is not exactly the sanest approach to seizing his own destiny – but unlike everyone else who has questioned his choices as Daredevil over the years, she’s not going to give up on him. Ultimately, even the most persevering attitudes and personal ethics are not enough to fight off the random nature of the universe itself: and sometimes, we have to fail to realize this. More importantly, it helps Fisk, Karen, and Matt realize the truth that we are ultimately, not in control of the things we love: whether it be relationships, dreams, or self-definition, just because we care about something or someone is not itself enough to save it. 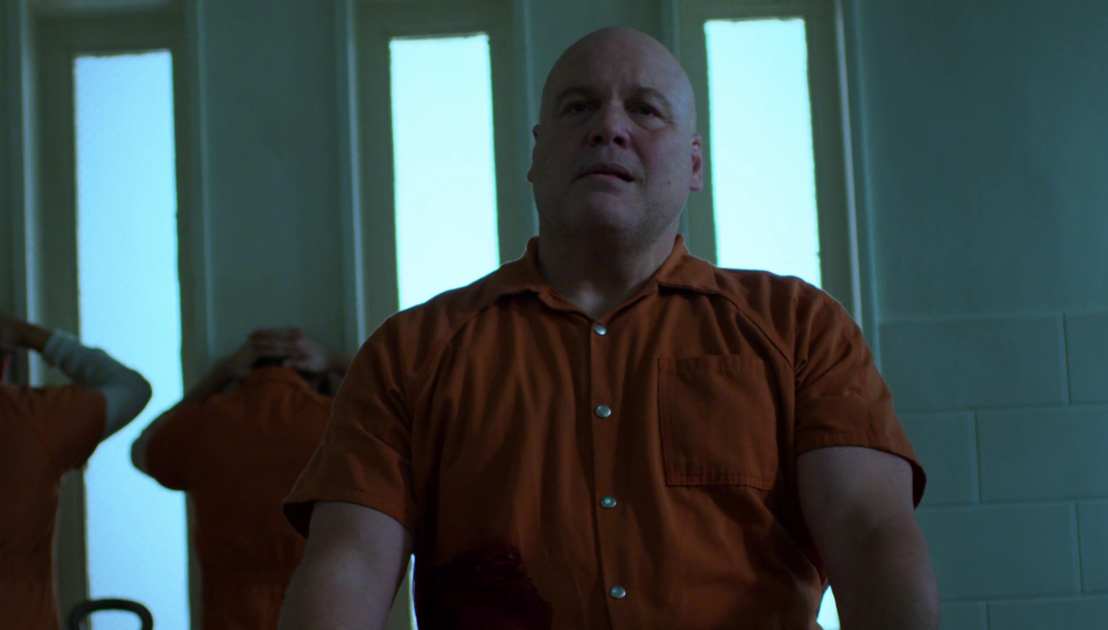 The danger of this, of course, is the delusion of self: and “Please” is thick with these ideas, observing characters as they conflate the ideas of purpose and destiny, with the actual realities of life. Foggy, ostensibly driven by his purpose to help people as a lawyer, suddenly feels much smaller when he returns home and realizes that maybe even he can’t help his own family; by the same token, Fisk is coming to terms with the limits of his own power when it comes to matters of the heart – an idea that is expressed in some truly trite monologue before the explosive final minutes of the hour. Even Matt has to face this, correcting the heiress when DD shows up in her father’s hospital room: when she thanks God for sending DD to her, he corrects her – and in the process, reveals the ego at the heart of his belief of his purpose as Daredevil, something he thinks is his destiny, even when his supposedly God-given enhanced senses are failing him.

In plot terms, much of “Please” is perfunctory, retreading the ideas presented in “Resurrection”, with little movement, save for Karen’s realization and the caravan assault that appears to introduce Bullseye to the audience – but it re-contextualizes the ideas in “Resurrection” in ways that allow Daredevil as a whole to reassess the arcs of its characters, course correcting as it finally pushes The Hand and its hundreds of back flipping ninjas to the background. If “Resurrection” began this reconstruction, “Please” very much feels like the culmination of that project, resettling Daredevil back into its old, gritty rhythms of season one meticulously in every scene. But that regression isn’t necessarily a bad thing: if the next few episodes can harness the potential that’s laid dormant in Daredevil‘s foundation since season one, “Please” may very well stand as the catalyst for a much welcome return to form for the Devil of Hell’s Kitchen.

– all that talk about perceived destiny, and I haven’t even mentioned that Netflix has canceled Iron Fist and Luke Cage in the last week, which has raised a lot of questions about the other three Marvel series still on Netflix’s slate, and whether the future they once planned with Marvel is now dead, as Disney Play prepares for release in 2019.

– Fisk’s speech to Nadeem is the kind of overblown Shakespearean bullshit that makes Fisk feel both powerfully composed, and ridiculously overwritten. “Love is the perfect prison” is eye-rolling quality writing, but Vincent D’Onofrio sells the ever loving shit out of it.

– the fight scene in the dry cleaner was fantastic; it ending with Daredevil using both men as punching bags was a stand-up-and-cheer kind of moment.

– “there’s no cure for getting old, Franklin.”

– Daredevil rocking the old school black mask and no armor is a neon fucking sign screaming “WE ARE GETTING BACK TO OUR ROOTS”.

– Remember when Karen was accused of killing her brother? Boy, that feels like it was a million years ago.

– “I don’t get to choose who I am. I am the Daredevil, and not even God can stop that now.”

– apparently Ray is a vegetarian? I don’t know why this was a plot point, but it was?

7 New Invitees for Mario’s Next Party

20 Years Since the Game Boy Color Launched in Japan: A Quiet Revolution