Like most other shows on Netflix, numerous episodes of Daredevil suffer simply because of the necessity of their existence: for the large majority of series on the streaming giant, there’s just too many minutes of television produced for any given show. Netflix’s Marvel series, in particular, have suffered: all six of their series have 13 episode seasons, where the episode length typically runs between 52-58 minutes. Frankly speaking, that’s too much fucking time to fill, and Daredevil episodes like “Blindsided” are a perfect example of why these extended production orders do a disservice to the material, an episode that wastes a terrific twelve-and-a-half minute fight sequence with more than forty minutes of utter bullshit around it. 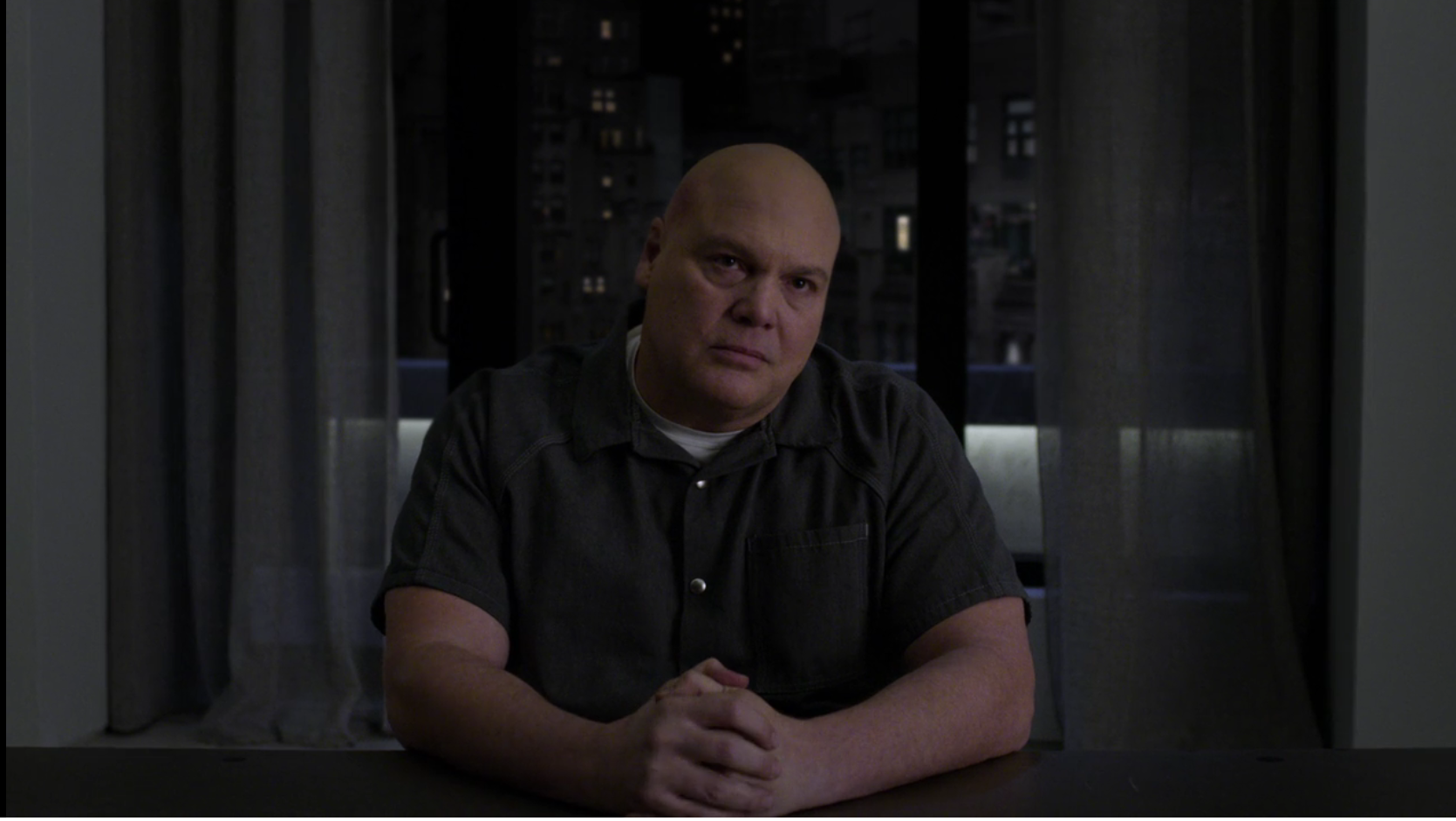 Instead of anchoring “Blindsided” with unrepentant brutality and nifty twists, the prison riot crafted to kill Matt Murdock sticks out like a sore thumb among the other, more rudimentary developments of the hour. To be honest, there isn’t shit going on in “Blindsided” outside of Matt’s prison escape, except for Foggy deciding to run for district attorney because… it’s the only way he thinks anyone will pay attention to what Wilson Fisk is doing? Outside of the brief comedic relief of watching Foggy awkwardly addressing the members of the police union (in front of the current district attorney himself, no less), Foggy’s decision to run a campaign entirely to blare his horn about one issue feels is painfully boring to watch, a story that never really finds a meaningful way to attach itself to the much higher, immediate stakes faced by Matt in this episode.

Instead of anchoring “Blindsided” with unrepentant brutality and nifty twists, the prison riot crafted to kill Matt Murdock sticks out like a sore thumb among the other, more rudimentary developments of the hour.

Karen’s attempts to learn about the bank Fisk is laundering money through feels even less imperative – though admittedly, it’s hard to give a plot that takes up about three minutes of running time enough thrust to carry itself. There’s really one good Karen moment this episode – when she shows up screaming at Matt’s apartment, mere hours after he’s been there – and the others are a smittering of some bullshit surrounding Fisk’s larger financial plans to fleece the federal government, plot mechanics already wearing thin since the picture became crystal clear in the last episode. Karen’s personal frustrations, as rote as they may be, at least amalgamate with Foggy’s disbelief, in humanizing Matt’s sudden reappearance in our lives; outside of the shooting of Fisk’s caravan that continues to resonate through his penthouse, Matt’s increasingly dangerous isolation tactics is the only story this season with real stakes, with some intriguing elements of human emotion thrown in.

There are promising elements of season three resting on the sidelines of this episode, that only briefly come to the surface when Fisk and Dex come face to face. The early hours of season three have established this season as a reflection on legacy, how the everlasting pressure to leave a meaningful difference on one’s world can so easily lead us down the wrong, dark paths. It’s been the primary concern of every character, from Matt questioning his legacy of faith, to Foggy and Karen worrying about their professional reputations, and Fisk trying to fight off his street expiration date with desperate, dangerous expeditions of manipulation. 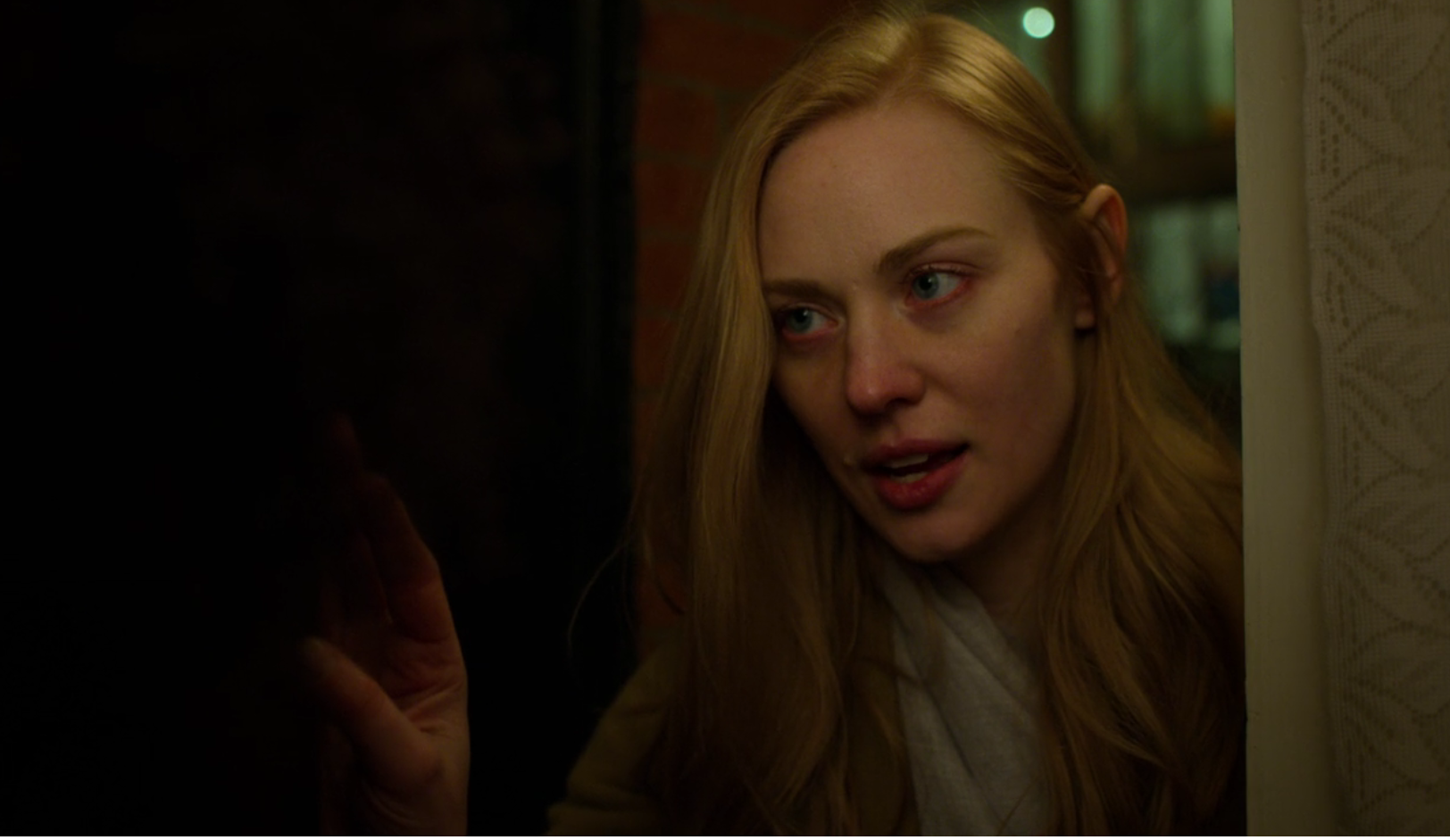 But in “Blindsided”, those deeper character conflicts are tossed off in favor of running circles around the truncated narrative of season three’s first four episodes. Often, Daredevil‘s adherence to its usual, slow rhythmic pacing works to its benefit – but the obvious lack of meaningful progress on the part of any character is not a pleasing, effective facet of “Blindsided”. There’s no great revelation or confrontation that “Blindsided” is building to, especially after it drops its most powerful sequence squarely in the middle of the episode. It completely throws the narrative trajectory of the hour off course, and given the lack of character work happening around the aforementioned scene, it makes for a disjointed, thoroughly disappointing hour of television.

All of that is to say the prison scene is fucking terrific: what initially feels like Daredevil paying homage to itself evolves into something much more kinetic (and chaotic) then I expected. For twelve and a half minutes, Matt Murdock is plunged into a Natural Born Killers-esque hellscape of a prison riot, seemingly orchestrated by Fisk to take Murdock out once and for all (since he threatened Vanessa, after all): but unlike the memorable fight scenes involving Matt in season one and two (season one and two’s hallway fight scenes), Matt is never in control of his surroundings, always the reactionary, and for once, never the aggressor. And each time you think the sequence is over, the stakes are raised: what begins with Matt being drugged by a nurse in a tiny locked room escalates into a woozy Matt trying to escape a literal war zone, with inmates killing guards and smoke from explosions filling everyone’s lungs. 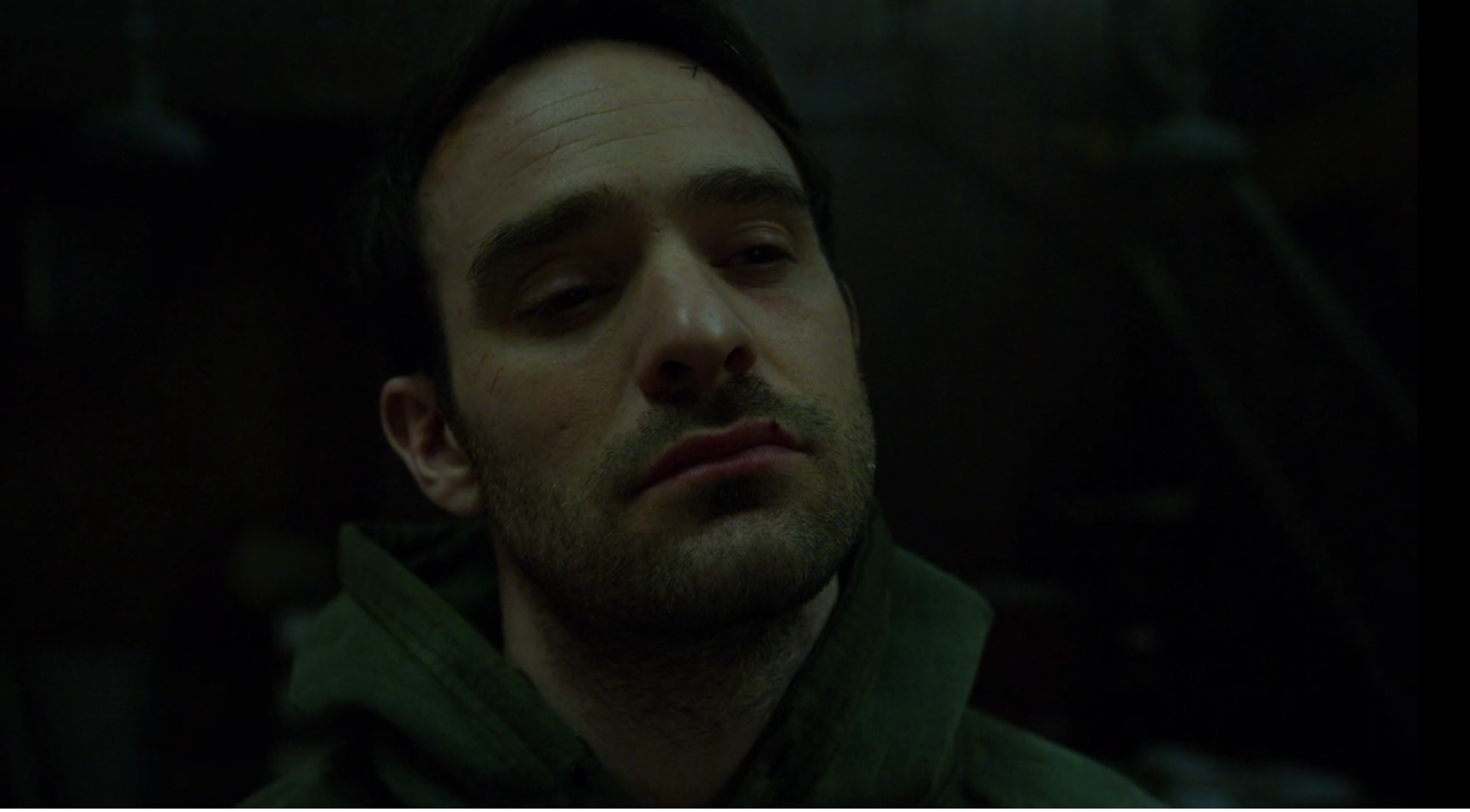 How quickly, and frequently, that sequence raises the stakes on Matt is an impressive feat, one rendered even more enjoyable by the few moments it relies on homage, enhanced by Matt’s almost-drunken master style under the influence of whatever sedative was pumped directly into the center of his hand. A brief interlude with the head Albanian in prison is really the only plot development in the entire sequence, which takes up more than one-fifth the episode’s running time: and it’s all it needs to propel itself back into the action, where the descent into hell becomes much more literal.

As always, Charlie Cox’s physical dedication to the role ends up taking center stage; if you aren’t paying attention already, he’s doing some of the best stunt work in the business. His performance has become the inverse of Tom Cruise’s Ethan Hunt; where Cruise goes for big, flashy (and dangerous) signature stunts, Cox delivers flashes of technical brilliance, driven by the exceptional fight choreography, and clear dedication to having some of the best stunt doubles and extras in the business working on Daredevil. It’s clearly a massive team effort, but Cox’s willingness to throw himself around sets every year is nevertheless a consistently impressive dedication to the character, and performance. 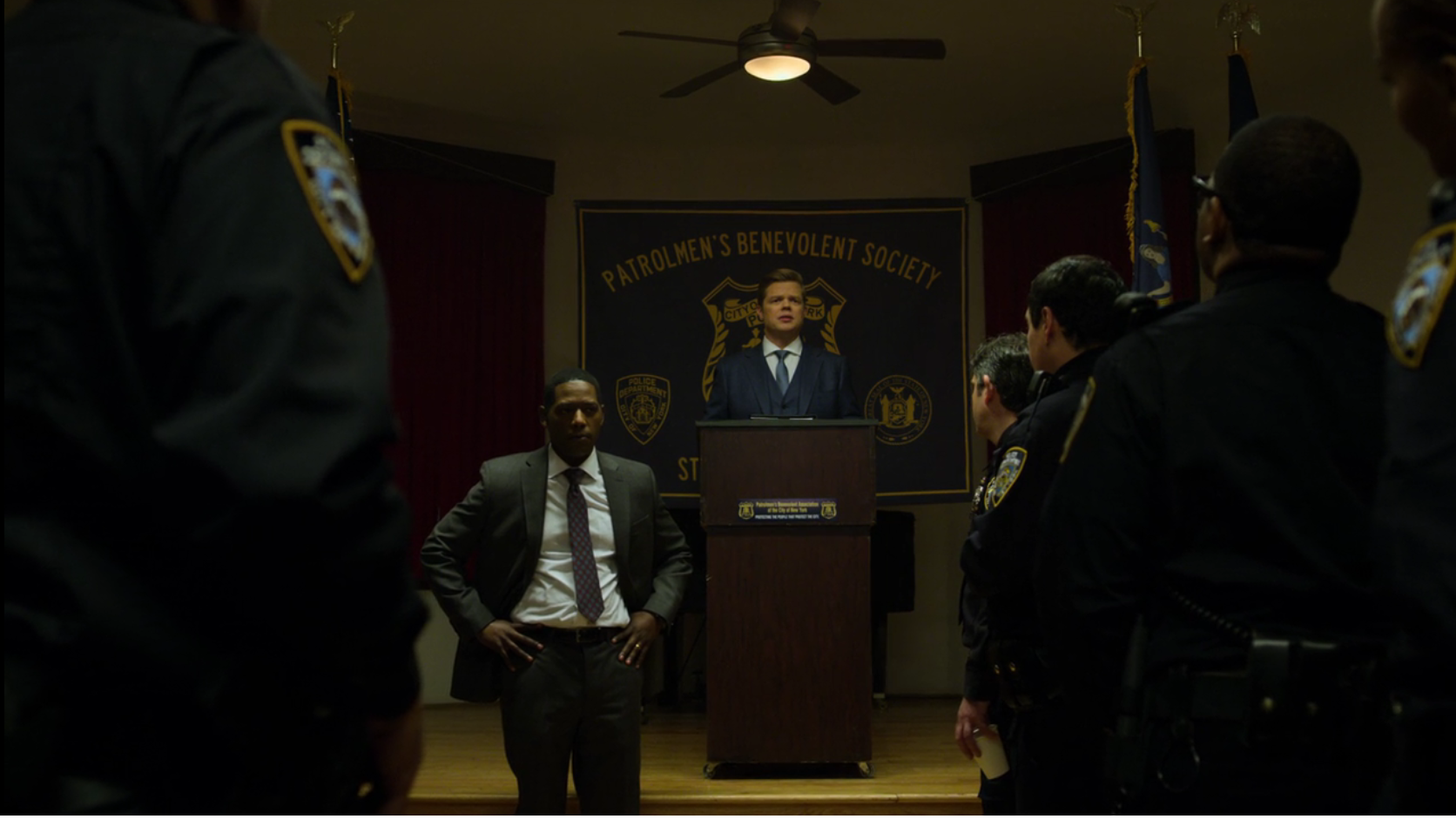 The scene is abundantly fun; but it’s rather perfunctory in the larger scheme of things. Matt gets a temporary pass from the Albanians to go after snitching ass Fisk, yet another round of cat and mouse between kingpin and devil that ends in stalemate. Disappointingly, Karen and Foggy’s stories aren’t even offered that sliver of progress; and because of that, all the excitement and adrenaline in the episode’s nucleus is wasted. With such little movement, it’s hard to even find potential in where the show will spend the next few hours of its time.

Even with Matt’s strong, if utterly predictable, arc re-anchoring the series, “Blindsided” displays the limits of its brand of slow burn storytelling, fumbling to fill time with pointless asides like Karen blowing a source to get some quick information, or Ray’s wife stirring up drama with their child in a way that feels nothing more than a distracting plot device. There’s still plenty of juice from the opening hours to keep the show moving for the time being, but the longer Daredevil twiddles its thumbs, the more worried I become it is about to fall back into its old habits. Just please, please don’t bring back the Army of a Million Ninjas.

25 Years Later: The Unattainable Nostalgia of ‘The Adventures of Pete & Pete’

[“Outside of the brief comedic relief of watching Foggy awkwardly addressing the members of the police union (in front of the current district attorney himself, no less), Foggy’s decision to run a campaign entirely to blare his horn about one issue feels is painfully boring to watch, a story that never really finds a meaningful way to attach itself to the much higher, immediate stakes faced by Matt in this episode.”]

Frankly, I found that scene appalling. Foggy Nelson pushing for a militarized NYPD? No thank you. It was like watching an American version of Berlin 1936.