This super-stylish live-action adaptation of the popular (and still ongoing) 1960 Italian comic book, created by Milan sisters Angela & Luciana Giussani, is easily the best of the spate of ’60s European comic-strip/superhero movies (e.g., Fantomas). Unfortunately, it suffered from bad timing, released among the campy but similar movies Batman and Barbarella. Yet despite being a box office flop, Danger: Diabolik eventually found a cult following, and is considered by many (including this reviewer) to be one of the best live-action comic book movies ever made – a hidden gem of the genre.

What makes this silly B-movie caper film interesting is its lack of all traditional values of good and evil, giving us instead a more interestingly ambiguous mix. The “rob from the rich, but never give back” approach to the titular character, Diabolik (John Phillip Law) and his girlfriend Eva (Marissa Mell), seems so odd in a comic book film that it alone bears examination. Diabolik is no hero, he’s a terrorist – a dreaded thief/killer who wreaks havoc on his own country for financial gain and amusement. He shares an extravagant underground lair (and a giant bed of money) with his curvaceous, superficial girlfriend (who uses her good looks to help him pull the next heist). Diabolik is an anti-hero whose life consists solely on preparing schemes to steal government money and make a fool of the entire police department and government. In the tradition of master criminals from Fantomas to Dr. Phibes, Diabolik uses a variety of high-tech gadgets and low-tech cunning to pull off his heists. At the same time, however, Diabolik’s actions betray him. No matter how large, his takes are never enough. Whether it is greed that takes control or the thrill of adventure, Diabolik is obsessed with pulling heist after heist until he himself is turned (literally) into gold.

This is a comic book movie in the best sense: relying little on dialogue, instead largely rendering the spectacle on purely visual terms. 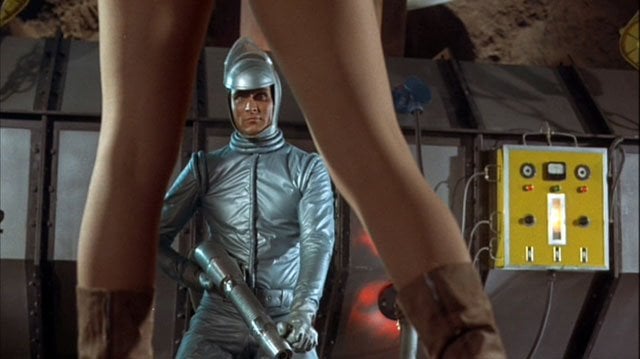 This is a comic book movie in the best sense: relying little on dialogue, instead largely rendering the spectacle on purely visual terms. Bava clearly understood the notion of comic book panels and cinema frames, creating dynamic compositions which perfectly mimics the actual comic-strip panels. Using whatever natural lines he could find to split the film frame (bed posts, mirrors, bookshelves), Bava smartly mimics the feel of the comic-book action.

Originally an established cinematographer before becoming a director, Bava was renowned for making a film look much better than its low budget would anticipate, and invented ways to cheat and manipulate the frame to make it look bigger and more extravagant than it really was (e.g. the film’s tower heist). Each single shot in Danger: Diabolik gives the impression of enormous space and imagination. He was a master in the use of colours, drowning his images in garish greens, yellow or reds. as well as well as creating such a detailed, three-dimensional world – enhanced by wide-angle lenses, psychedelic sets, and outrageous costumes. It’s amazing when you consider how little money he actually spent—only $400,000 of his allotted $3 million budget, yet Diabolik looks ten times as costly.

Also, worth noting is Ennio Morricone’s outrageous electric guitar and sitar-laden score. The film’s theme, “Deep Deep Down,” is bursting at the seams with lush, groovy orchestration. It’s easily one of his finest scores, capturing the foxily devilish tone of both the comic and the film, while providing the perfect compliment to Bava’s dynamic shots.

John Philip Law (fresh off Barbarella) plays the lead like a stealthy James Bond, with his Euro-hunk good looks. Law cuts a striking and charismatic figure as the titular character, a suave super-criminal who has a fondness for gorgeous women and anything stolen. In a film like this, there is no depth to the characterizations; the style calls for an exaggerated sort of performance, which he delivers relying on extended body language (most notable: the raised eyebrow). 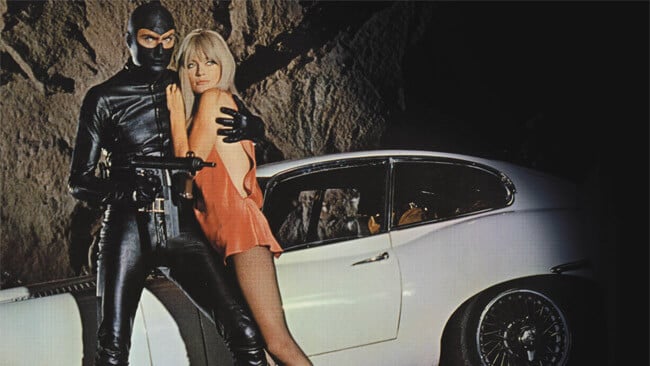 The lovely Marisa Mell ably fills the role of Eva Kant, a character that appears prominently in the comics, even though she’s not given very much to do in this film besides bat her eyelashes and get kidnapped. Also, worth noting is the fabulous supporting cast, which includes the great Michel Piccoli (Contempt), Adolfo Celi (Thunderball), Terry-Thomas, and a swarm of beautiful women.

During its final season, Mystery Science Theater 3000 used this film as an object of ridicule, but Danger: Diabolik is an absolute pulp masterpiece, having gone on to inspire filmmakers to come, including Roman Coppola’s CQ and the Beastie Boys music video, Body Movin’. A final fadeout wink to the audience, in the end, seems to promise a sequel, only the director declined future offers from its producer, Dino de Laurentiis, preferring to work without interference on his usual low-budget horror films.