Cinema’s Ultimate Jerks is a celebration of the characters we love to hate in the movies we love to love. They’re not always the main villains – and sometimes they’re not even villains at all – but they’re definitely jerks. So let’s take a look at this week’s jerk-off, and why they find themselves forever enshrined here in the hall of shame. Since this week we’re talking about Paul Krendler, this is your spoiler warning for the 2001 movie Hannibal. 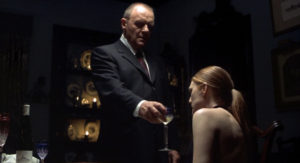 Hannibal Lecter was convinced he’d be winning the money on this week’s Come Dine With Me.

The Hannibal Lecter movies have never left us wanting when it comes to characters that are so loathsome and detestable that we want to see real bad things happen to them, real soon. While many of these characters are of the criminally insane variety and fall more in line with what we traditionally think of as baddies when it comes to serial killer movies, there’s also a few that are ostensibly on the side of good, but are absolute hoops regardless. The Silence of the Lambs gave us the hideous Dr. Fredrick Chilton, but Hannibal ups the ante with Ray Liotta’s Paul Krendler.

Paul Krendler has a bit part in The Silence of the Lambs (and it’s not Ray Liotta) as a big-shot bureaucrat that’s about to make life very tricky for Clarice Starling unless she catches serial killer Buffalo Bill, and quick. Of course, she does and we never hear from Mr. Krendler again. By the time Hannibal rolls around, Clarice (and it’s not Jodie Foster) has had the shine taken off her career somewhat after a couple of botched jobs in the public eye, and her bosses are coming down on her hard. Paul Krendler is one of those bosses, and he seems to take immense pleasure in making Clarice squirm at every conceivable opportunity.

As the movie goes on, we learn that Paul Krendler is a prick to Clarice because years previous she rebuffed his romantic advances and told him to go home to his wife. Romantic advances might be overselling it somewhat, because he strikes me as the “any hole’s a goal” sort of scumbag, and it’s more likely than anything that he just wanted a bit of slap and tickle behind the back of her indoors. Anyway, obviously, since Clarice didn’t want to partake in any of these adulterous shenanigans, Paul Krendler now has to be an absolute peenarse to her because those are the rules. Someone doesn’t want to have sex with you? Thou shalt make their life a misery forever more. I think that’s one of the Jerk-Off Ten Commandments. 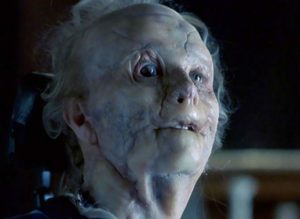 It’s Gary Oldman under all that make up.

Anyway, not only is Paul Krendler massively incapable of dealing with rejection like a rational human being, it later turns out he’s also not above taking bribes from the dregs of society in exchange for his clout within the FBI. Mason Verger – an evil millionaire paraplegic – isn’t too fond of everyone’s favourite cannibal psychiatrist, and he’s sending Paul Krendler money as part of an international effort to lure Hannibal out of hiding so he can have him killed for revenge. You see, years previously, before Hannibal was ever arrested for his naughty eating, he came across Mason Verger and wasn’t a big fan. Mason liked to abuse children which Hannibal thought of as incredibly rude, so he drugged the millionaire with hallucinogens, convinced him to peel his own face off, and then snapped his neck leaving him alive, but paralysed. Yikes. Mason is none too happy about his current state of affairs thanks to Lecter, and wants Paul Krendler to publicly destroy Clarice Starling for whom Hannibal has a bit of a thing, knowing it’ll capture the good doctor’s attention and then they can strike.

Paul Krendler spends most of the rest of the movie being an obnoxious jerk to Clarice, while also taking money from a known pedophile and all round rotter with nary the briefest hint that he might feel remotely bad about any of it. He’s a scumbag crooked FBI agent, and that’s just something we simply can’t stomach. If you can’t trust the FBI, who can you trust? Paul, you’ve let the FBI down, you’ve let America down, and most importantly, you’ve let me down. On the plus side, by the end of the movie, we don’t really need to worry about that any more.

I hate it when you start the night with good intentions, and then someone says, “Jägerbombs?” and then next thing you know your brain is out.

Paul Krendler: I always figured him for a queer.
Clarice Starling: Why would you say that, Paul?
Paul Krendler: Well, all this artsy-fartsy stuff.

Comeuppance: Okay. Sometimes baddies get their just desserts and sometimes they don’t, but when it comes to making sure that what goes around comes around few movies deliver quite as resolutely as Hannibal. Hannibal Lecter foils Mason Verger’s plans to murder him, and, of course, murders him right back. It turns out that Lecter isn’t totally okay with Paul Krendler trying to destroy Clarice Starling’s career just to get one over on him, and so he prepares a little revenge. Before I wind up slipping into some sort of lazy, “Revenge is a dish best served cold,” pun, let’s just get down to brass tacks: Hannibal kidnaps Paul, drugs him, lobotomises him, cuts the top of his skull off with a surgical saw, picks bits of his brain out, stir fries them, and feeds them to Krendler while he’s still alive. On the plus side, Paul does seem to enjoy his meal.

Jerk-off Rating: Honestly, all that horrible shit above happens to him and you don’t even feel sorry for him at all.

Tune in next week – same jerk time, same jerk channel – to find out who’s next in our celebration of cinema’s ultimate jerks. And if you’ve not quite had your fill of cinematic jerk-offs, check out #22 Draco Malfoy (Harry Potter), #19 Byron Hadley (The Shawshank Redemption), or Iosef Tarasov (John Wick).

The Definitive Ranking of the ‘Mission: Impossible’ Series

Zelda’s Hero: Making the Most of Motion Controls in ‘Skyward Sword’160 Total Shares