The Conjuring Franchise and Catholicism

“The devil exists. God exists. And for us, as people, our very destiny hinges upon which one we elect to follow” – Ed Warren.

Horror and religion have been intertwined forever. The fear of the unknown, based in irrationality, is almost always tied to faith (perhaps irrational, perhaps not) — to something bigger than ourselves. That’s why a lot of the classic horror of the 70s, such as The Exorcist, The Omen and The Devils, use the teachings of Christianity — and more specifically Catholicism — to lend the evils they depict a certain feeling of authenticity. The best recent example of this is the Conjuring Universe, which has used Catholicism and Catholic imagery in order to create the most successful modern horror franchise.

The Conjuring franchise is a shared universe, but its villain is quite different to Thanos in the MCU. He cannot be seen, defeated, or even bargained with. He will only send his minions — whether its Valak, Bathsheba or Annabelle — to do his work. For the ultimate villain of the franchise is the devil himself, a fallen angel that can never be killed. Horror franchises are popular with producers because they can never end; for example, Halloween, is currently enjoying its eleventh installment. And what better metaphor for the never-ending nature of horror than literally the devil himself?

Tasked with fighting his vessels are paranormal investigators Ed and Lorraine Warren, played with utmost seriousness by Patrick Wilson and Vera Farmiga. Supposedly based on the true stories of how the couple investigated real hauntings, the films see Lorraine able to sense the presence of evil, while Ed works as a de-facto priest, attempting exorcisms and banishing demonic spirits. Here, even with the temptation to go full-camp readily available, the Conjuring films make their activities feel completely serious, knowing that this is the only way to make the terrors within feel legitimately terrifying.

With a lot of traditional Christian movies almost unspeakably bad (see: God’s Not Dead), it’s refreshing to watch something fairly wholesome like The Conjuring and see it take religious belief seriously. There’s no tongue-in-cheek parody here, but a genuine earnestness in exploring how one’s own faith can be tested by the presence of evil. And one needn’t be religious themselves to appreciate the movies, especially the entries directed by James Wan, which combine old-school thrills with excellent camerawork, maintaining a constant sense of dread throughout. However, the religious context gives the franchise a certain depth and flavour that is probably the main reason why the six films so far have already grossed over $1.5 billion worldwide. If you are a believer, then the Devil really is something really worth being scared about; if not, the films, which don’t preach or pander to the viewer, allow you to imagine as if you do.

There have been two spin-offs of the Conjuring Franchise so far: the Annabelle films, which sees a demonic doll bring ruination on everyone it touches, and the purely fictional The Nun, set in a haunted Abbey in Romania. Much like how nearly everything in the MCU is connected via the Infinity Stones, the Devil’s presence is the connecting glue between each of The Conjuring films. He cannot be truly beaten — his presence can only be banished from individuals so that they can be good again. This is the teaching of Christianity in a nutshell, in which good or evil lies solely in the individual, and it is up to us to embrace goodness in order to be saved.

Relying on classic religious imagery can often do a lot of heavy lifting in a horror movie. Whether it’s crosses being turned on their side in The Conjuring 2 or the doll in Annabelle: Creation being warded off with pages from the Holy Bible, the series’ creators have understood the power of religious metaphor, and how they can hint at unspeakable evils without having to rely on anything remotely gruesome. This is the key to the franchise’s success, keeping the rating to an R (and as low as 12-years in foreign territories) while still being legitimately terrifying. 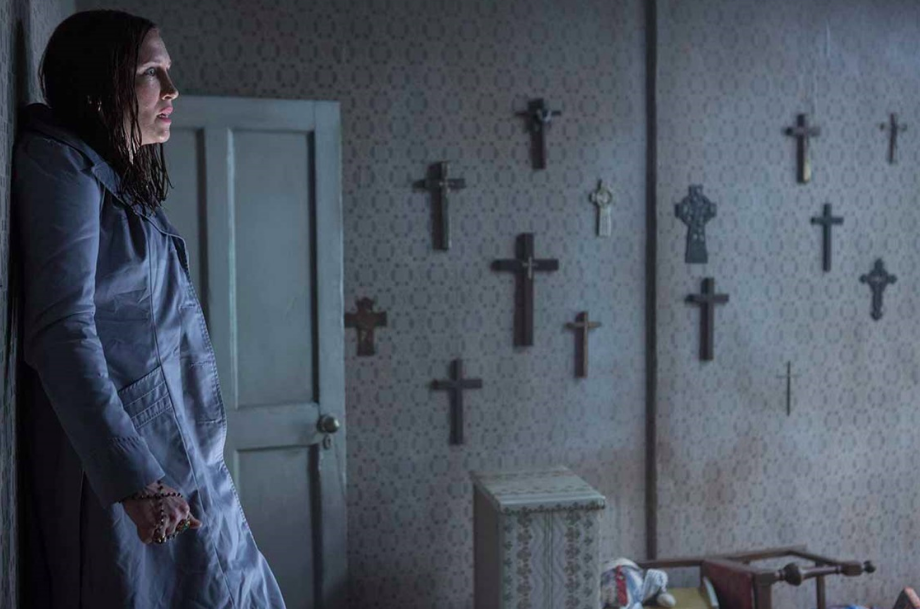 The Nun was a natural extension of religion as metaphor, and played almost entirely with form instead of developing any sort of through-line for its characters. This approach divided critics, who said that the movie lacked genuine thrills, yet it is a mini-masterpiece in how to really push the envelope with religious imagery in order to create a truly grand guignol-atmosphere. Whether it was Irene’s pure white habit contrasted against the black of the nuns she is investigating, or the multitude of crosses dotted outside the abbey in order to keep the evil within, The Nun was a pure sensory overload of religious imagery, turning symbols of goodness on their head in order to question whether faith alone is strong enough to defeat evil. For a real conservative Christian, these images may be pretty blasphemous, but for someone whose faith is slightly half-assed (like mine) yet still remembers the fire-and-brimstone sermons of their youth, they do a great job of invoking genuine terror.

Recent, highly successful horrors such as Hereditary and The Haunting of Hill House have preferred to use terror as a metaphor for trauma or mental illness, giving the genre a new and fresh approach to characterization. While I appreciated their strengths as psychologically rigorous explorations of trauma, they don’t necessarily hit as hard on a gut level simply due to their relative lack of religious basis. (Of course Hereditary had King Paimon, but he is actually a pre-Christian demon.) It’s not a criticism per se (I definitely wouldn’t have the strength to argue that The Nun is a better film than Hereditary), but merely a gut reaction to horror based in personal experience — which is what being scared is all about. A lot of what I was taught at Catholic school may be irrational, but these ancient ideas of sin and evil have a way of lodging themselves inside you, refusing to be contained. I suspect a lot of people who aren’t particularly religious, but were brought up in a religious household or school, may feel the same.

Mission: Impossible was an Unusually Quiet Start to...

‘Suspiria’ Aches Over the Evils of This World