There’s a viable movie hiding somewhere in the central conceit of Nacho Vigalondo’s Colossal, but Vigalondo’s script and direction goes awry so early and often that it’s difficult to imagine an effective reconstruction. Reminiscent of previous quasi-indie genre-drama hybrids like Another Earth, which generated an entire, fully populated copy of Earth to merely, haplessly stand in for one woman’s grief, Colossal exploits the giant-monster-movie genre for a feature-length stab at pathos and social commentary with the tact and grace of a freshman short.

After a brief prologue, Colossal introduces us to Gloria (Anne Hathaway), an alcoholic thirtysomething New Yorker who failed out of a writing career and mostly slums around in her boyfriend’s (Dan Stevens) apartment and parties. Fed up with her cycles of substance abuse and deception, said boyfriend kicks her out, forcing her to move back to her parents’ empty, unfurnished home in the never-specified hamlet she’s from. Not long after she returns there, two key occurrences crop up: she reconnects with her childhood acquaintance, sad-sack bar owner Oscar (Jason Sudeikis), and news reports break of a giant, Godzilla-esque monster wreaking havoc on Seoul, South Korea. After examining her behavior, Gloria deduces that she is the creature; when she steps into a particular local playground at a particular time of day, she simultaneously manifests as the creature, with her haphazard drunkenness causing wanton destruction and countless deaths.

Within its first half-hour, Vigalondo’s script saddles Gloria with the responsibility of having claimed hundreds of lives, a realization that lands awkwardly for a variety of reasons. One of the most important is that Gloria is a feebly sketched figure whose motivations, personality, history, and peculiarities are totally unknown to us beyond the fact that she has a tendency to scratch her head (the tic that makes her notice her connection to the creature) and that she’s an alcoholic. We’re repeatedly informed that she used to be “a writer,” which is generally scriptwriter code for “this character’s occupation is irrelevant to this film,” just one of many missed opportunities to flesh out even two-dimensional characters.

Not too long after her realization that she’s been the direct cause of mass destruction, Gloria attempts to make things right with a peaceful gesture, which would seem to defuse the situation, until it becomes clear that Oscar shares Gloria’s supernatural connection to downtown Seoul’s unfortunate landscape. It’s when Oscar shows his true colours as a resentful, misogynistic figure that Colossal really begins to struggle to balance its many thematic concerns. 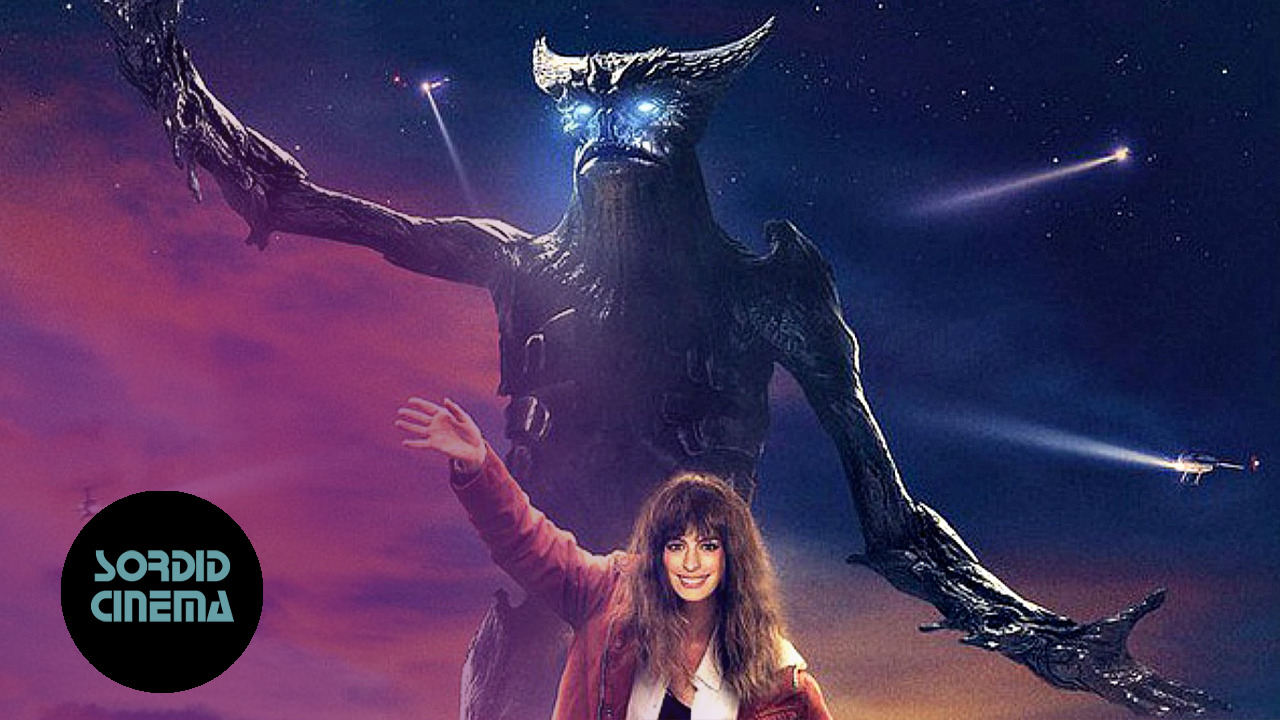 Is this a movie about Western conceptions of global calamity, wherein casualties afar are rendered as little more than numbers on a news ticker? Colossal doesn’t really allow for that reading, because we know almost nothing about Gloria or what led her to this relatively desperate place in life (which would help to account for a blinkered worldview), and not one South Korean citizen (beyond an incidental character in the insulting final scene) has even a speaking part, despite Seoul being the site of countless fatalities over the course of the movie. Nothing in Vigalondo’s script or direction suggests a shred of self-awareness about its attempt to get us to care about her plight while systematically ignoring or eliding the actual catastrophes she’s caused or associated with.

OK, so Colossal doesn’t work as social commentary on the subject of trivializing tragedy. Is there a thematic level on which it does function? Since it plainly doesn’t work as a movie about the corrosive effects of substance abuse (since Gloria and her troubles are so ill-defined), or as being about the perils of nostalgia (since, again, we learn nothing about Gloria’s childhood or her relationship with her hometown, her past, friends, or family), could it perhaps work as a movie about toxic masculinity? It comes closest on this level thanks to Sudeikis and his mostly quiet work establishing Oscar as a desperate figure in dim hope of deliverance from his trappings as a small-town loser. Still, Oscar feels more like a careful plot/theme construct than a flesh-and-blood person, a manifestation of contemporary fears of both the spooky Flyover State White Working Class and the Phony Nice Guy archetype. (Another weird, self-sabotaging quirk of this movie: despite his artificiality, Oscar is still a much better-developed character than Gloria, which renders the movie’s attempt to seem rousing or empowering deeply awkward.)

What, then, did Vigalondo think this movie was about? That’s the question that should leave most viewers mystified. The kaiju genre was born with Godzilla, a movie about the existential dangers of nuclear proliferation and the need for humanity to rise above mere international concerns in the hope of lasting peace – a message inspired by a very real global trauma. Colossal attempts to remix the urban decimation that comes with kaiju territory in the service of a much smaller story about one woman’s struggle with a domineering, abusive asshole – but to what end? If it was to serve as a meta-commentary on the supposedly narrower concerns of millenials, Vigalondo fails, since Colossal doesn’t seem to think that anything matters beyond Gloria’s emancipation from the many awful men in her life.  A single depiction of the dead or wounded in Seoul might have done a lot to drive home some kind of satiric contrast, but Vigalondo keeps the entire affair insultingly bloodless. The result is yet another movie that attempts to “elevate” genre tropes in an attempt to make them palatable to folks who found Pacific Rim a touch gauche, only to wind up losing both the thematic potency and actual enjoyment inherent to the material it’s supposedly repurposing to higher ends.

At the risk of disparaging Colossal solely on social justice grounds, it’s important to note that Colossal doesn’t work on any detectable formal level. Its sequences of giant-monster-vs-giant-robot battle are purely secondary to their human corollaries, and those clashes lack any intensity. As a comedy (which it fitfully tries to be in its first two acts), it’s a total failure, eliciting chuckles only in the initial scenes of distant crowds cheering on Gloria’s monster. (This is especially disappointing since Vigalondo’s first feature, Timecrimes, was a darkly funny, economical take on time-travel tropes – a repurposing of genre elements that actually worked.) As a drama, it fails to engender any investment in the fates of its characters since they’re either deeply repellent or too ill-defined to elicit a reaction of any kind (Oscar’s local pals, played by Tim Blake Nelson and Austin Stowell, are particularly flat), and its pacing lags, especially its listless first act. As a sci-fi film, its approach to depicting the genre aspects of its premise are indifferent to the point of being insulting, and its creature designs are off-handed and nondescript. The sequence in which the nature of Gloria and Oscar’s metaphysical connection to Seoul is revealed is cartoonish in relation to the devastation they inflict on it, helping to underline the entire film as a misbegotten lark not worth taking seriously even as it demands that viewers do so.

What could have been a potent movie about emotional and physical abuse, or the corrosive effects of self-absorption, or a how we imagine ourselves as more consequential than we are to center our own anxieties and avoid serious self-examination, merely winds up feeling like just another ill-considered American movie in which a faceless, voiceless Other’s death toll accumulates without real consequence – except as it relates to one Westerner’s hurt feelings.

Berlinale 2020: ‘Curveball’ Is Way Behind The Curve

‘A Bittersweet Life’ is a Blood-Soaked Revenge Tragedy

Berlinale 2020: ‘All The Dead Ones’ Wastes its Important Message