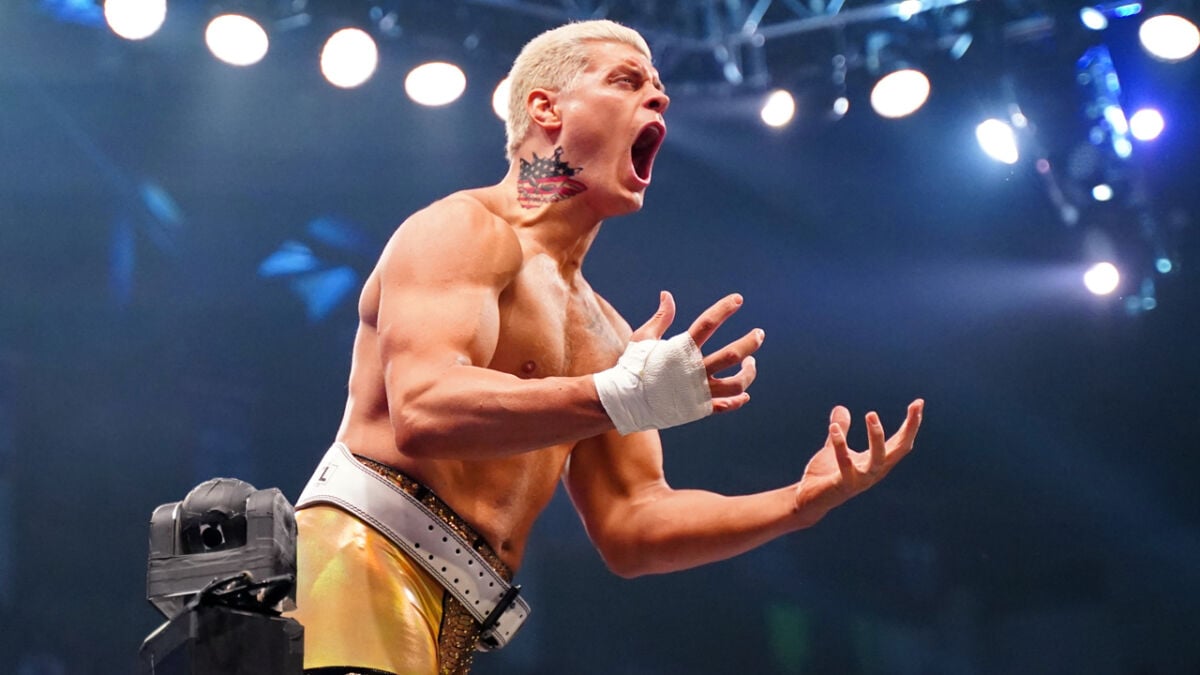 The Cody Rhodes Journey in AEW

Cody Rhodes recently took the fall to a debuting Malakai Black in decisive fashion. It was a good match too. Afterwards, Cody teased a potential retirement before being sneak-attacked by Black -presumably as revenge for stealing his moment.

Both the best and worst of Cody in AEW were on show against Black. So, with a teased retirement on the horizon, let’s look at Cody’s time in the promotion, his rather odd booking, and what the future could hold.

The Early Days Of AEW

During AEW’s early spell, Cody was by far the stand-out performer. Every promo was compelling, the in-ring work was exceptional, and he even put on AEW’s first truly great match with his brother, Dustin.

The booking was spot on too. He was fairly dominant in the build up to a title shot against Jericho, but it made sense. He was the top wrestler at the time and he had the fans behind him too. Thankfully, AEW even put to bed the early worries about the EVPs -Cody, Kenny, & The Bucks- just holding all the titles and dominating the main event -for a while anyway. The AEW Championship match with Jericho included the stipulation that Cody could no longer challenge for the belt if he lost. He did lose, and they’ve not gone back on that promise either. I just wish they’d have done the same thing with The Young Bucks, grumble grumble.

We can’t forget Cody’s smashing first TNT Title run too. It may not have been better than Darby’s time with the strap, but Cody’s open challenge included some smashing surprises and debuts like Eddie Kingstone, Ricky Starks, and Warhorse. Great stuff. Unfortunately, though, all good things must come to an end.

It’s been spoken of before on this site, but it’s worth mentioning again: Cody Rhodes’ character doesn’t make any sense. In essence, all the EVPs have the exact same character, yet all are completely different. Cody, Kenny, and the Bucks are all smug, entitled narcissists who go everywhere with an entourage -classic heels. Yet, Cody is apparently a good guy, the Bucks are completely unbearable, and Kenny is an entertaining comic-book villain. It’s the same character three times yet only one of them gets it right. It’s Omega by the way.

This problem with Cody has been no more evident than with the feud against Anthony Ogogo. Going into it, Cody was an overly patriotic narcissist apparently fending off the evil foreign heel. The problem was, it’s 2021, not the ‘80s. It doesn’t work anymore and just comes across as naive. It was especially jarring when Ogogo was coming across as much more likable, as well as making more justifiable points. There may be some element of bias on my part as a Brit, but general sentiment online seemed to go the same way. With Cody winning, it felt like a much bigger storyline ending at the wrong point. Like if Apollo Creed beat Drago at the start of Rocky 4. That film would’ve been rubbish if that’s how it played out.

If Cody was in the midst of a long played-out heel turn, then it’d be fine, but after the less-than-subtle ‘Good vs Evil’ match with Black and the teased retirement, it’s looking less and less likely.

This is not meant as a slight on Cody as a person or wrestler. On the mic, he’s one of the best around and as an in-ring storyteller, he is near unmatched. It’s just the current character that’s a problem.

After the Ogogo debacle, there was a justifiable worry that Cody would beat Malakai Black on his debut at the recent AEW Homecoming show -4th of August, 2021. Thankfully, that didn’t happen. Rather it ended in decisive fashion reminiscent of Cody’s shock defeat at the hands of Brodie Lee. After the match, Cody stayed in the ring and started cutting a promo about his career and what his ambitions were. Black cut him off mid-way just as Cody was symbolically removing his boots, hinting at retirement. If we’re honest, it was fair enough for Black to be annoyed. He’d just won on his debut and Cody was stealing the limelight for his own selfish need like the narcissist he is. Again, Cody is supposed to be the good guy here. The promo itself was almost as long as the match too. Should’ve hoofed him a second time, Malakai.

Recently becoming a father, Cody is likely taking some time off after this feud with Malakai is all said and done. What that means for the blow-off match between the two is the real question. It seems set up to happen at some point, the question is when. You’d hope that if it does happen then Black will win in an equally dominant way to set him up as a real main-eventer. Whether Cody will retire and hang up the boots for good is another question. Though even if he says he is and you’re sad about that fact, just think: Terry Funk, and all will be well.

A Look At AEW Rampage Episode One

Talk AEW Podcast #40: AEW Dynamite Homecoming, a.k.a. The Night of the Creeps!