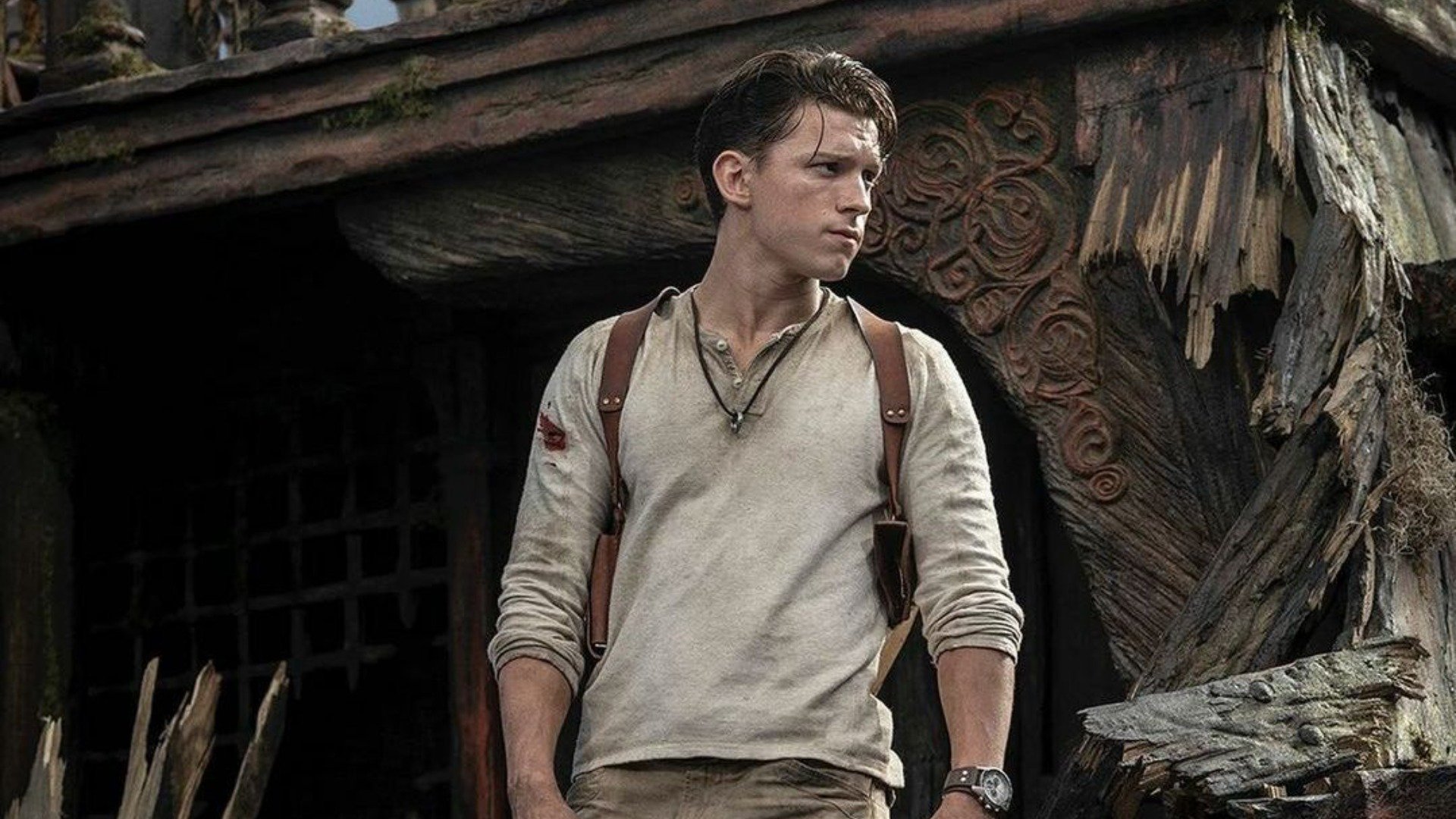 Breaking Down the Trailer for Uncharted

Dante Alighieri’s The Divine Comedy outlines nine circles of hell, what the epic didn’t account for was a tenth circle reserved for creative projects like Duke Nukem Forever, Starcraft: Ghost, and the Uncharted movie that would take years to ever see the light of day. It’s hard to believe but the Uncharted movie adaptation has been in development long enough for Mark Wahlberg to have aged out of the role of Nathan Drake and into the role of Victor Sullivan all while staying attached to the project the entire time. After more than 10 years the first trailer for Uncharted was finally released this morning, lets break it down.

The trailer opens with a narration of Tom Holland’s Nathan Drake stating “there are places out there you can’t find on any map” as the character is shown exploring some sort of ancient ruin while a soft piano rendition of the series’ main theme plays. The narration continues “they’re not gone, they’re just lost.” and we see Nate and a female companion pick up a scroll and unroll it, revealing a clearly aged map of the world.

After a quick look at the Sony Pictures and Columbia Pictures splash screens a third production company splash screen appears, PlayStation Productions. While this has nothing to do with the actual content of the trailer it’s notable as we can expect to see this splash screen attached to several upcoming movies and shows including Ghost of Tsushima, Twisted Metal, and HBO’s The Last of Us.

After the splash screens, the trailer cuts to a scene of Nate tending to what appears to be a high society bar. We hear Mark Wahlberg’s Victor Sullivan say, “Hey kid, little young for a bartender aren’t ya?” to which Nate replies “Little old for prom aren’t you?” This scene could be interpreted as the two characters first meeting, but a few things lead me to think this is more of a reunion than an introduction. In chapter 2 of Uncharted 3, we learned the origins of Nate and Sully’s relationship occurred in a museum in Cartagena, Colombia. This movie obviously being a different iteration of the same story and characters could mean that these details will change but Sully’s usage of the word “kid” as a term of endearment tracks with the two having at least started developing what will become a lifelong friendship.

The trailer then cuts to a scene in which Nate is looking around what is presumably Sully’s hideout. Once again Nate is shown being drawn to a map and is asked by Sully “of everything in here, why the map?” to which Nate replies “this is the path Ferdinand Magellan took to sail around the world.” As he says this the camera shows Nate tracking his finger along the map south of India toward western Africa.

Nate’s interest in Magellan combined with the now multiple sightings of western Africa on maps in the first 35 seconds of the trailer could be a clue towards the larger plot of the movie. The Uncharted games have always featured fantastical plots of treasure, adventure, and the supernatural but the legends portrayed in the games have always been rooted in reality. Uncharted: Drakes Fortune saw Nate and Elena on the trail of Francis Drake’s treasure that also happened to be El Dorado the city of gold, Uncharted 2: Among Thieves took the cast on an adventure following in the footsteps of Marco Polo culminating in the discovery and destruction of both the fabled Chintamani stone and the city of Shambhala, in Uncharted 3: Drake’s Deception, Nate finds himself once again in pursuit of Francis Drake ending in the discovery of the Pillars of Iram, and Uncharted 4: A Thief’s End tells the story of Nate and his long lost brother Sam’s pursuit of the pirate Henry Avery’s treasure and the lost pirate city Libertalia. It appears as though Nate’s first appearance on the silver screen will be in pursuit of Magellan.

In late 1519 Ferdinand Magellan set sail from the southern coast of Spain in search of a western passage to the Spice Islands. After landing in Brazil and a mutiny in South America, Magellan’s crew eventually arrived at the Spice Islands in early 1522. From there they continued west eventually landing in the Cape of Good Hope at the southern tip of Africa. While actual historical documentation shows that the Cape of Good Hope is as close to western Africa as Magellan got, the Uncharted series has always had a liberal relationship with the truth.

Immediately after Nate examines the map in Sully’s hideout, he is shown closing a book, the title of which is The House of Moncada. The house of Moncada was a family of Spanish nobles who grew in both wealth and political power throughout the duration of the 11th and 12th centuries BC. Coincidentally, or maybe not so coincidentally, Magellan, who was of Portuguese descent, was contracted by Spain to find a new route to the Spice Islands after the 1494 Treaty of Tordesillas left the well-known eastern route under Portuguese control. Magellan’s willingness to undertake this voyage for the Spanish led to him being considered a traitor to Portugal. All these details surrounding the Moncada family, and Magellan’s journey could easily be spun into a narrative of lost riches and a secret mission for a foreign agent.

After a quick glance at the book, Sully says to Nate “I think you’re here because of your brother.” To which Nate replies “wait you know my brother Sam?” Then after an assortment of shots including Nate’s iconic “Sic Parvis Magna” ring and a mysterious shipwreck Sully says, “If we find that gold, we find him too.” These lines indicate a few things. First, unlike in the games, Sam will be a significant part of the story from the start. Second, the plot of the movie will undoubtedly differ from the games as Nate’s surprise at Sully’s knowing his brother directly contradicts the timeline of the games that sees Nate and Sam part ways prior to Nate’s running away from the orphanage and meeting Sully in Colombia.

The next part of the trailer shows a dark-haired woman with an Australian accent meeting Nate and Sully. Nate introduces himself as a “friend of Sully” to which the woman, presumably Chloe Frazer, responds “Sully doesn’t have any friends, I should know, I’m one of them.” Not only does this exchange establish a connection between Sully and Chloe prior to Nate meeting Chloe but it also is the first time we ever see the origin of Nate and Chloe’s relationship in either video games or the movie.

A few more exciting action shots later and we finally hear the voice of Antonio Banderas saying, “you are a collector?” to which Nate responds “well, I dabble” as a shot of a gold catholic cross with rubies embedded in it appears on screen. Banderas goes on to say, “my family has been looking for this fortune for a very long time.” Based on the tone of this interaction Banderas will almost certainly be playing the movie’s villain. And the focus on the Catholic cross is interesting as it again draws attention to Spain’s history as a Catholic nation and Magellan’s being a devout Catholic evangelist. This may be a leap, but this cross could be a treasure of the Moncada nobles that was lost by Magellan during his mission on behalf of 16th-century Spanish royalty, implying that Banderas’ character is a descendent of the Moncada’s.

More action shots later and Nate says “I’ve been hearing about this stuff since I was a kid. My brother Sam left one final clue.” Nate is shown holding a postcard that contextually the audience is meant to assume is from Sam. Nate holds a lighter under the postcard showing a hidden message that again, we are made to believe is from Sam. This combination of shot and dialogue again explicitly mentions Sam and Nate’s relation to him (just in case we missed it the first time it was shoehorned into the dialogue) and confirms that Sam will undoubtedly play a significant role in the story which leads me to believe that the character will even make an appearance toward the end of the film.

For the final sequence before the title card, the audience is treated to an extremely truncated live-action version of the iconic cargo plane action set piece from Uncharted 3. While this is clearly an attempt at hooking the portion of the audience that is already familiar with the games, it left a bad taste in my mouth. As much as I love Uncharted, I have already experienced the excitement of that moment. If Sony insists on adapting Uncharted into a movie, then I would rather they focus on making it a unique Uncharted experience as opposed to simply recreating a highlight reel of the iconic moments from the games in live-action.

The title card envelopes the screen and then the trailer cuts back to Nate as he is confronted by a man with a thick Scottish accent making some sort of threat. Nate responds with a furrowed brow and a confused “what?” This moment more than two minutes into the trailer is the first and only time I was able to stop seeing Tom Holland and start seeing Nathan Drake. Hopefully, there is significantly more of this level of character work in the rest of the movie.

The trailer concludes with a few more action shots and the announcement of the movie releasing on February 18, 2022. Notably absent from the trailer was any appearance of Nate’s main love interest throughout the games, Elena Fisher. There’s a lot left to be learned about the plot and Tom Holland still has a long way to go before winning me over as Nate, but the trailer wasn’t entirely terrible. Sophia Ali has big shoes to fill as Claudia Black played Chloe wonderfully, but it looks like she is doing a great job of it thus far. And had you asked me 12 years ago what the worst part of the Uncharted movie would be, I would have told you, Mark Wahlberg as Nathan Drake. But now if you asked me what the best part of the Uncharted movie is going to be I have to say Mark Wahlberg as Victor Sullivan. No matter what I think of the trailer, I’m a big enough Uncharted fan that I’ll be in the theater on February 18th to see everything the movie has or doesn’t have, to offer.