At first glance, Sorry We Missed You may appear to be merely a re-tread of Loach’s 2016 Palme d’Or winner; both films focus on the steady downfall of a struggling everyman unable to break out of a declining spiral of economic destitution, victimized by the structures of post-Fordist capitalism that systematically exploits the underclass. As if to heighten the connection, the opening of Loach’s new project is nearly identical to I, Daniel Blake’s — simple white-on-black credits play silently over the dialogue of the protagonist who is answering a series of inexplicably convoluted questions to a dispassionate official. In the earlier film, the scene is revealed to be Daniel applying for disability benefits; here it is Ricky (Kris Hitchen) applying for a zero-hour position as a white van delivery driver.

Ricky lost his long-term construction job in the 2008 financial crash, and has been hopping between low-paid temporary gigs ever since. As a result of his job insecurity and ever-mounting debts, Ricky was forced to put a hold on purchasing a house with his doting wife, Abbie (Debbie Honeywood). The two now rent a string of properties with their two children: wayward teenager Seb (Rhys Stone), and the precocious Liza Jane (Katie Proctor).

The prospect of delivery driving for a corporate package distribution company thus seems immediately appealing to Rick. He is told that he can act as his own boss, choose his own hours, and (if he works hard enough) make a substantially larger profit than he’d earn in conventional employment. However, complications soon arise. Ricky is informed that he will essentially be working as a freelancer, and the size of his paycheck will depend entirely on the number of orders that are made to the company. In order to begin, he must rent his own van, priced at a hefty £14,000 — to be paid in £400 monthly installments and accompanied by an initial £1000 deposit.

The position is, therefore, a huge gamble; if it works out well, it means that Ricky will finally be granted an easy ticket out of economic ruin, but if it doesn’t, the safety net offered by traditional, salaried employment will not be in place to prevent his family from being plunged further into the poorhouse. Ricky’s misplaced faith in meritocracy, leads him to gleefully accept the offer, persuading Jane to sell her car to raise the upfront fees.

It doesn’t take Ricky long to realize his mistake. The pressure is enormous, the hours are long, and the work is demeaning (he is treated with brazen disrespect by most of the customers he delivers packages to, and is forced to urinate in a plastic water bottle to prevent wasting time with a bathroom break). These factors increasingly give rise to conflicts which fracture the family unit. Without her car, Abbie is forced to take long journeys on public transportation to get to her freelance care jobs, leaving her with nearly no time to spend with her children; meanwhile, Seb becomes disenfranchised with the seeming hopelessness of the work-a-day adult world, and, in lieu of proper guidance, is swayed towards juvenile delinquency, transforming the formerly warm young man into a hot-tempered brute. The ratcheting tensions also cause havoc with Liza Jane’s bourgeoning anxiety issues.

The gradual build-ups of these familial confrontations serve as a sophisticated exploration of the ways in which the political shapes the personal, and the horrific effects financial strain can wreak on intimate relationships. In many ways, Sorry We Missed You feels like Loach’s riff on Fassbinder’s great I Only Want You To Love Me, a sorrowful intimate epic in which a working-class marriage is eroded by the pressures of mounting debts. Like Fassbinder, Loach fiercely attacks the notion of a society which positions personal wealth as the measure of human worth, imbuing a seemingly mundane narrative with a mounting sense of tension which violently explodes in the film’s bravura final act. 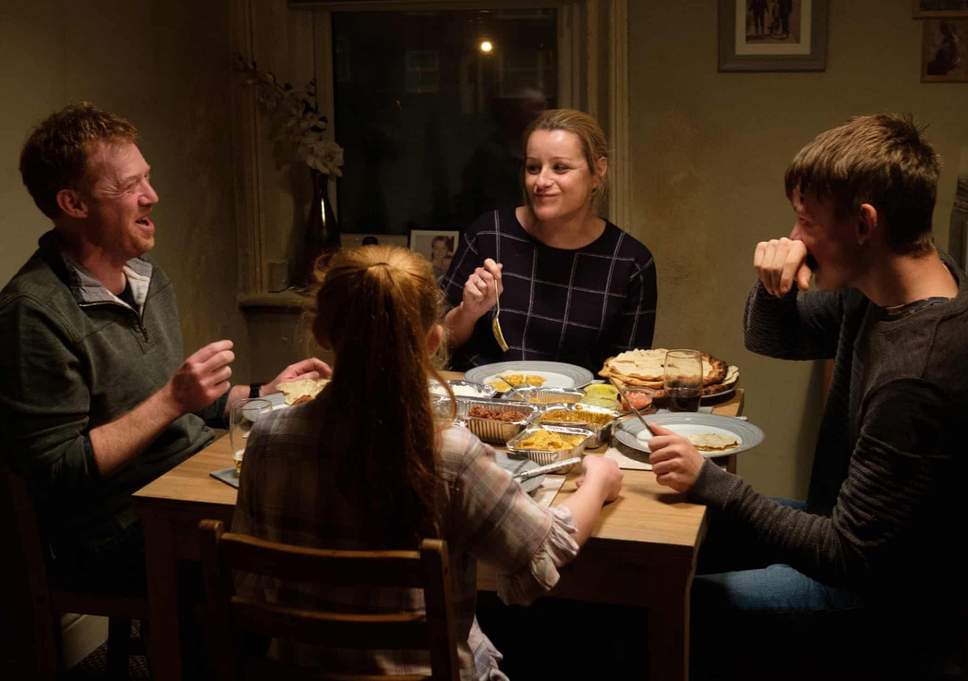 The nuanced, multifaceted portrayal of the British working class elevates Sorry We Missed You far above the overly schematic Blake, which flattens its characters into one-dimensional figures of angelic warmth in an attempt to heighten the tragedy of their victimization at the hands of the state. While the rose-tinted Blake willfully overlooks the ugly behaviour that is fostered by squalid social conditions, Sorry To Miss You illustrates the ways in which the insidious forces of the predatory capitalism infect every aspect of daily life, transforming well-meaning men into monsters and turning family members against one another. Seeing a family been torn apart from the inside by their allegiance to an unjust system that they rely on simply to survive is far more heart-wrenching than seeing a few unrecognizable, good-natured figures pitted against a string of anonymous corporate boogeymen.

Ricky and Abbie allow their personal lives fall to pieces through their total commitment to their work, but they are not motivated by greed; instead, theirs is a simple need to sustain the basic elements of living — food, water, shelter. No matter how hard they work, however, Ricky and Abbie will never truly reap the material benefits of their labour. This is a true reflection of the struggles facing working-class families, and a far cry from the jejune sentiments of Jarmusch’s The Dead Don’t Die, which suggests that the problem with modern capitalism is that it encourages shallow rich kids to want too many iPhones.

The dehumanizing effect of the contemporary working world is a key theme here, realized more fully than it was in Blake. Ricky is forced to carry around a portable scanner which tallies the number of deliveries he has made each day, and uses this information to set increasingly high targets that he must hit if he wants to maintain his position. The company that employs Ricky, of course, refuses to see him as an individual rather than a machine to generate profit. When he asks for a few days away from work to cope with his crumbling familial situation, he is not only denied, but threatened with a sanction — a scare tactic employed to pummel Ricky into submission.

This is a damn vital subject, and one which calls for the tone of righteous anger of Sorry We Missed You rather than the subdued black comedy of I, Daniel Blake. The sense of measured distance that was the dominant mode of Loach’s twilight era has thankfully been abandoned here, as he instead plunges us with full force into the visceral desperation — the searing anxiety and the pain of living in hardship — while conjuring the most arresting images of his career. Many sequences towards the latter part of the film are excruciating in their visualization of abject humiliation, yet never feel exploitative or manipulative.

Editor’s Note: This article was originally published on May 17, 2019, as part of our coverage of the 72nd Cannes Film Festival.

‘The Wretched’ Leans Heavily on its Inspirations