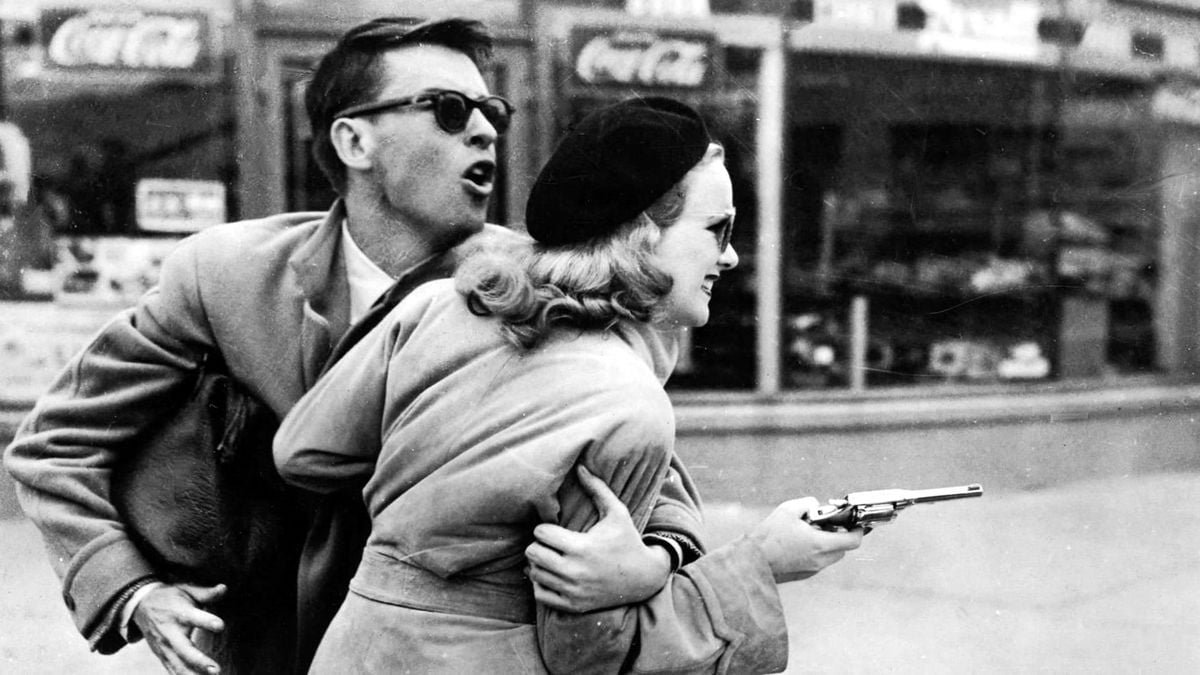 An argument can be made that almost every movie made is, in some fashion or another, about obsession. Individuals are always obsessing over some things, namely their top interests. However stimulating and healthy some might be, several others carry the potential to be downright vile. The 1950, Joseph H. Lewis-directed Gun Crazy, as the title suggests, is very clearly about an obsession, unsubtly so in fact. Loving guns might, might, make one a police officer, or a guard, or a marine, or any field in which guns are, let us say, put to good use, sort of. Being so fascinated with firearms is a double-edged sword, mind you. The tool’s predominant utility is to kill, after all. With such dire consequences linked with the weapon, what would it be like if the person wielding the object, who was a great shot too, refused to shoot a living being?

The setup to Gun Crazy’s main story thread is as ambiguous and strange as the rest of the film. A young boy named Bart, perhaps a young teenager is more exact, walks up to a gun shop window on a ferociously rainy night. The lad makes an attempt to steal a firearm but is immediately found out by an officer on patrol. Later on, in court, his older sister, who also fills the role of mother and father, tries to explain and defend the youngster’s love for guns. Even Bart himself has difficulty formulating into words what it is about them that attracts him so. In a nutshell, he manipulates them with remarkable skill and so he wants to possess them and do what he is good at, no more, no less. Flash forward several years later and Bart (John Dall) is now a mild-mannered adult, returning back to his hometown after some time in the army. He and some old pals decide to spend the evening at an amusement park that is paying the region a short visit. That night, they attend a strange little show in which a sexy lady named Annie Laurie Starr (Peggy Cummins) demonstrates her proficient marksmanship. Bart challenges her, wins said contest, and the two hit it off immediately. The trick is, Annie wants more in life. More money, more gifts, more of the high life, but without all the long, hard work that would lead up to such a socio-economic status. Two fine marksmen thus perfect the art of theft…

Time can function in funny ways, especially in how it treats movies. Following an initial viewing, the audio commentary, hosted by a film noir ‘expert’ was turned on for a few scenes, through which it was learned that the film did incredibly poor during its two theatrical runs (after the first failure, the film as redistributed once more under its current title). Audiences did not respond kindly, that is, the few people who saw it. Critics were not much more enamored either. Yet, here it exists today on a more than competent DVD and Blu-ray with an audio commentary from an expert in the genre. It was actually included in the very first volume of a Warner Brothers set of Film Noir DVDs, a set that includes some of the all-time heavy hitters, like The Asphalt Jungle and Out of the Past, so clearly opinion about Gun Crazy has changed dramatically. Truth be told, this has little to do with the majority of the current review, only an interesting tidbit that struck the viewer, but worthwhile to note. The acting style is different from today, the cinematography uses a few tricks that nobody practices any longer (such as back projection), but the film resonates incredibly. Its story and themes, of which there are many to the point where the article cannot analyze each and everyone, make the film quite an achievement.

Gun Crazy is a superb movie!

Joseph H. Lewis’s picture is daunting to write about in a simple review, precisely because of the ambiguity of some characters, daring cinematography, and what the film is trying to say. It feels like one of those films that can be interpreted in so many different ways. Granted, many films can as well, but two viewings, only two, made the author think about the film in two slightly different ways. Will a third viewing immediately produce a third interpretation? Who knows… The crux of the film’s riches lies in the two doomed lovers it follows, the conflicted Bart and his beautiful wife Annie, who truly loves her husband, but only when the latter commits acts he himself second guesses. Bart, brought to life by an impressive if the near-discomforting performance by John Dall (in the sense that this man knows that what he is doing is wrong, yet with child-like audacity/stupidity and culpability does it anyways) is the ultimate conflicted protagonist, the ultimate anti-hero, the ultimate ‘good’ bad guy. It begins, perhaps in an obvious manner, with his attachment to guns even before his attachment to Annie. As mentioned earlier, the audience never learns exactly why he loves them so. The reason provided, that he is good at using them, suffices. Could he not discover another hobby, trade, or profession he was good at? Of course, just as anybody can, but that is not the sort of movie Bart lives in, so he will not. Coupled with his adoration of pistols is his refusal, or fear if you will, of opening fire onto people and all living beings (a flashback early on reveals that the protagonist cannot bring himself to shoot even animals ever again after killing just one). He and Annie are continuously on the run from the law, and while his main squeeze sees a little problem in neutralizing their pursuers with bullets, Bart just cannot bear to do it. Annie is the main thrusting energy that brings them to steal and threaten people. She is too greedy and wants to obtain everything in as quick a manner as possible, even if it means risking the lives of others. She may hint that another life would be interesting, she may hint that she would like to stop this dangerous game, but her inhibitions are of the seedy, maniacal kind. This dichotomy is so bizarrely fascinating and attractive. How could Bart not love this woman after all? Not only does she love him in return, but they are both good with guns. Nay, they are both great with guns and love the darn things, but oh what an unhealthy relationship this can be. If only Bart was…a little bit smarter, a little bit more confident in taking a stance.

On a more technical level, director Lewis brings an impressive skill to the table which serves to both further the plot and help create ideas about characters in the specific moments. This idea that Bart knows there might be something wrong with his obsession is played on throughout. There is an early moment in the courtroom scene when the camera has Bart older sister, who is speaking to the judge in defense of her brother, as the dominant figure in the foreground, while the young version of Bart sits with his head bowed in the background. He knows he has done wrong, but he cannot help it. He is not crazy, but there is something wrong with him. There are people who know he is, in many ways, good (his sister continues to believe this later on when things really get hectic), but rather than merely spell it out via dialogue, the director and his cinematographer find ways to literally show it to us. Another scene even plays a little trick on the audience. It occurs near the middle portion when Bart and Annie are driving towards the destination of their next hit. There is a camera set up in the back seat of the car, and the frame never cuts away. We, the viewers, are stuck in this back seat, listening to Bart and Annie nervously chat as the moment of their hit approaches. Like it or not, we have become accomplices in their crimes. We are not bad people, but then again, neither is Bart, yet he does this anyways, just as we are watching anyways. Well played, Lewis.

The discussion of Gun Crazy could go on and on and on. It is an unexpectedly layered picture that challenges the viewer’s conception of what makes an individual a decent person. When does an obsession loom large enough to colour a person’s image from a decent individual with a slight issue that needs resolving to a villain? Suffice to say, Gun Crazy is a superb movie.

The Lost Film Noir, ‘Too Late for Tears’ is a Captivating Thriller