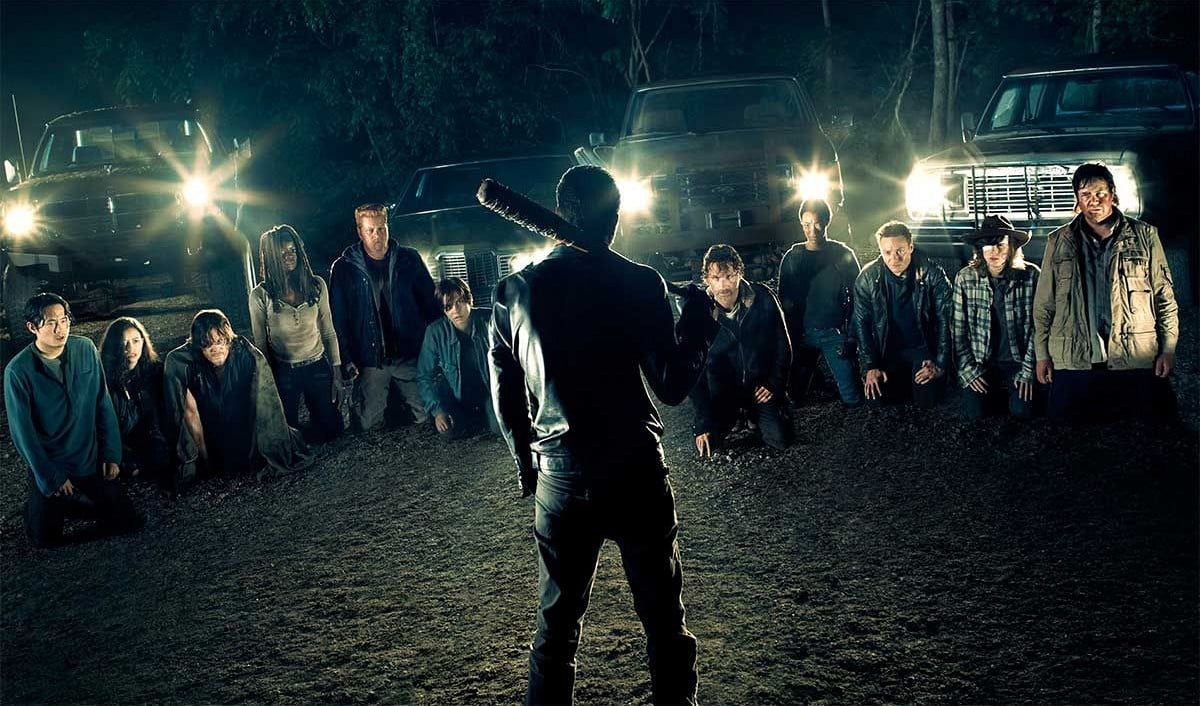 Last Sunday, AMC finally aired the Season 7 premiere of its hugely popular series, The Walking Dead. For six long months, fans and casual viewers alike had speculated about who among our ragtag band of misfit protagonists would feel the wrath of Neegan, the egregiously charismatic leader of the Saviors and the series’ newest and so far most compelling baddy, after the  Season 6 finale ended with Rick and his acolytes lined up before their foe as the latter prattled on about killing one of them with his pimped-up baseball bat, “Lucille”. With a classic use of the “guess which main character has to die so that viewers can retain interest in the series?” device, the Season 6 finale ended before revealing who Neegan chose to kill, in what many fans have since called an epic dick move on the part of the show’s writers and producers.

In the few days since this episode aired, viewers have proclaimed their generalized sense of shock and outrage at its unprecedented level of gore and graphic violence — even by The Walking Dead standards — across all corners of the Internet, making my task of providing a fair and balanced review of the Season 7 premiere all the more difficult. So, instead of simply adding my voice to the chorus of the malcontent with regards to the violence and gore that many of us are still trying to shake off, I will instead show the consideration that the series’ writers and producers withheld from their legions of loyal fans, and just say what many of us are already thinking:

Unless The Walking Dead can fill its allotted time slot with more substantial material than graphically gross and emotionally manipulative vignettes of post-apocalyptic humanity’s inhumanity towards the living, the beloved TV series might well be on its way to jumping the proverbial shark.

That the last season ended on a cliff-hanger is not my primary gripe with how the seventh season began. Indeed, other shows have famously pulled off the  “who got killed/who killed or tried to kill a main character?” trope with deft artistry in the not too distant past. The Season 6 finale of The Simpsons, another critically acclaimed, long-running series comes to mind, with its now-classic”Who shot Mr Burns? Part 1″ episode, for which the animators produced several alternate endings to keep the outcome a secret.

However, the use of the “who got killed” plot device in the Season 7 premiere of The Walking Dead (which also featured a series of alternate head-bashings, in what might have seemed to many viewers over the age of 35 like a deliberate nod at The Simpsons’ own masterful Season 6  cliffhanger) just felt like a lazy, unoriginal attempt at keeping the viewers engaged after a long run of increasingly banal — and tiresome — zombie-smashing in the desolate wilderness of the Southern United States.

With its disjointed narrative and atrocious pacing, the Season 7 premiere of The Walking Dead hinted at the possibility that the writers had no idea how to keep the viewers interested for the entirety of the episode, which is likely why the identities of Neegan’s victims were revealed well into the second act. In filling the time with cringe-worthy scenes where Neegan made our hero Rick his figurative bitch, the show’s writers forgot the cardinal rule of cliffhanger episodes, in that whatever lingering mystery had been set forth in the previous installment must be resolved swiftly in order to further the plot and usher in the new chapter. The Walking Dead‘s Season 7 premiere failed miserably in that regard, trolling instead the viewer with something as close to snuff media as prime time television will ever allow, for one long, excruciating hour.

It thus comes as no surprise to this reviewer — and soon-to-be former viewer — that any further investment in this series might prove, at best, to be a waste of precious leisure time.

For the sake of my continued friendship with throngs of superfans and other assorted Walking Dead Heads, let us hope that I am wrong.

The making of Michael Jackson’s ‘Thriller’ – Still, the Best Music Video Ever Made

Marisol Charbonneau completed a Master's degree in Religious Studies, Anthropology of Religion at the University of Ottawa, and has authored several articles on Contemporary Paganism in Montreal, as well as a work of mythology/science-fiction to be released later this year.