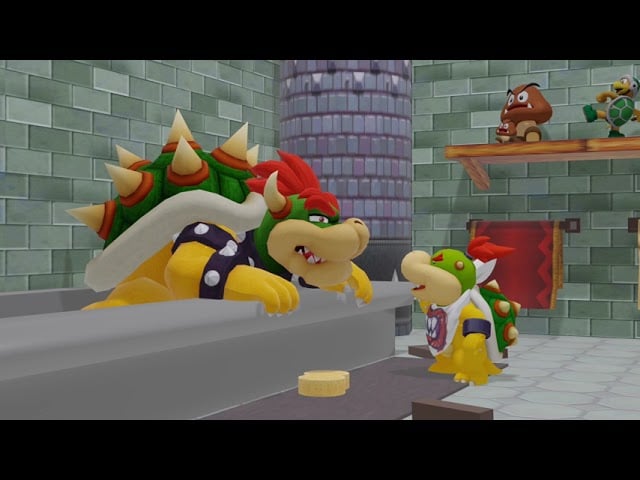 We are back with more fun fan content that literally brightens my day, so of course, I had to share it with the blog readers (I know there are at least a couple of you out there. I can feel your scorn). This time, we are looking at some short but stupendous animations created by Twitter user @Crestamorph, which reimagines some scenes between the infamous father and son duo Homer and Bart Simpson using the animation software Blender. Crestamorph brilliantly animates a few scenes from The Simpsons to replace them with another infamous father and son duo: Bowser and Bowser Jr.

The first animation comes from that meme scene wherein Bart hits Homer over the head with a chair whilst Homer innocently takes a bath. This feels perfectly in character for Bowser and his son. I can imagine this actually happening. I now want this in a Mario game. Nintendo, make it happen. I like the little detail of Bowser picking up his sponge again following his initial shock and also the little goomba figures on the shelf in the background.

Blender is very fun to use once you learn a few things. pic.twitter.com/eoGOFXlhFy

The next moment features the two eating some ice cream and having a father-son chat wherein Bowser explains how he got out of jury duty. Spoiler alert: it’s not a good idea to use the technique that he suggests. Again, this feels spot-on for the characters. It just works.

The last animation I could find (not sure if Crestamorph has done any more of these Bowser/ The Simpsons crossovers) is Bowser warning Bowser Jr of possible boogie men in their home. I am assuming that he is referring to Mario. Do you think this is how Bowser warns Bowser Jr every time Mario gets into the castle?