“Planned Obsolescence” very much feels like a small piece of a larger thought for BoJack Horseman, an episode more concerned with table-setting some of the season’s larger themes and dynamics, in place of delivering a singularly satisfying episode. With no single story taking the lead at any point, “Planned Obsolescence” is neither memorable or forgettable, three isolated stories drawing parallels from the similarities in their premises, a complicated task that only allows for the broadest of strokes in the climatic moments of the episode. BoJack is at its best, its deepest, when it reaches deeper for more specific, powerful truths about its characters and worldview, and “Planned Obsolescence” is never an episode trying to achieve those heights. Being a serialized series, these episodes are often necessary – but it doesn’t make it, in a vacuum, any more satisfying, at least in the short term. 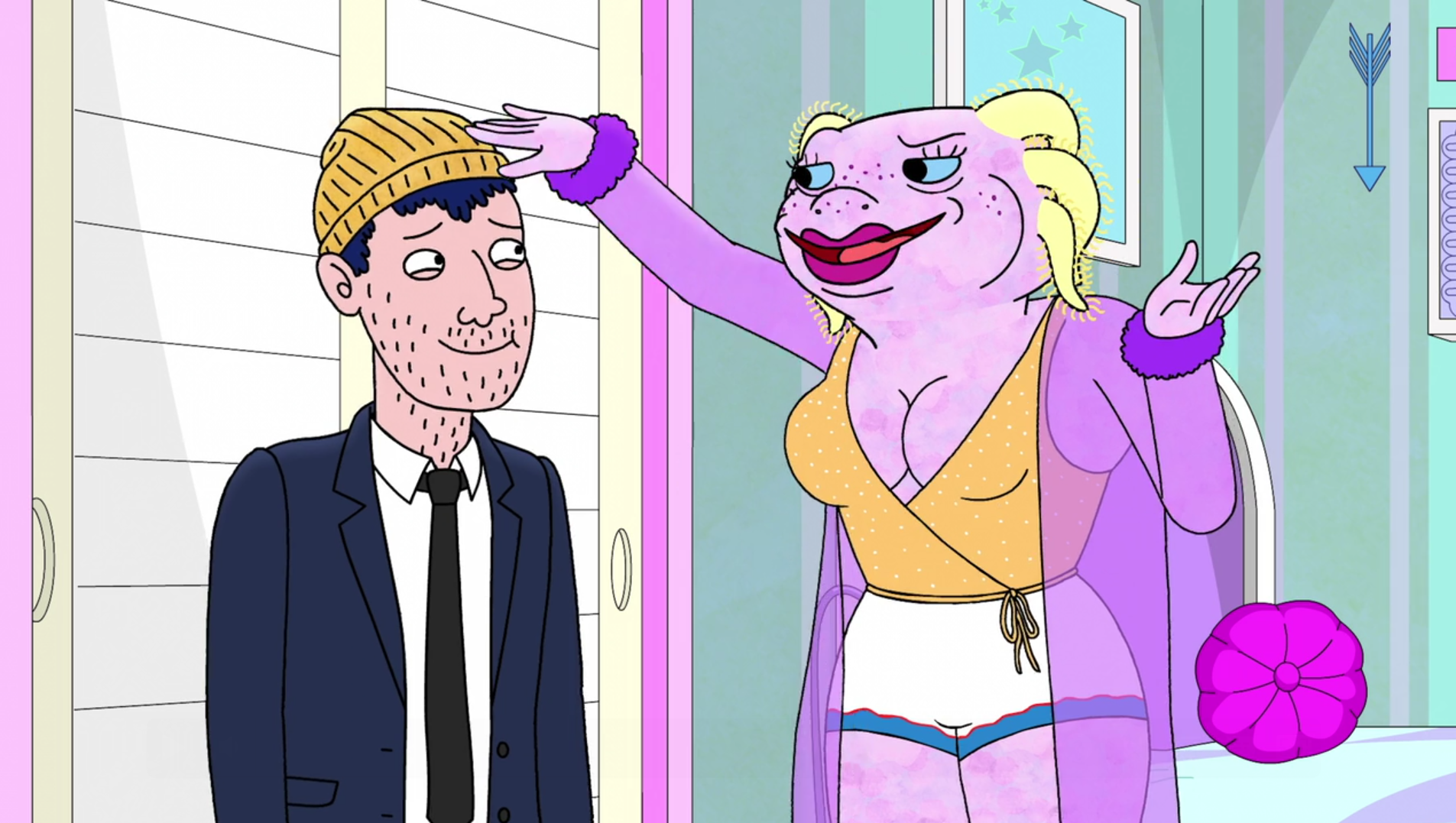 While that is a perfectly believable progression of events, in Yolanda’s case, it robs her character of any specificity; instead, her suffering is mostly reserved to being a catalyst for Todd’s journey, rather than a satisfying arc of her own. BoJack‘s used other characters like this in the past – usually female, like Sextina Aquafina or Courtney Portnoy – but in those cases, there was some significant development of their characters before their “Big Moments” speaking to real-world cultural moments. In this case, it feels like BoJack Horseman is switching gears, and disposing of a character in less than honorable fashion.

However, it is Yolanda’s opening line that provides the backbone of the entire episode: “the most important thing is that we’re being honest with each other, and ourselves”. It is in the context of her investigating BoJack’s restaurant, of course, but it holds true for all stories of the episode; like Gina’s pictures of BoJack in his sleep, sometimes honesty is ugly. In Gina’s case, it’s being the victim of BoJack’s latest round of unintended consequences, another in a long line of people ultimately damaged when BoJack decides he knows what’s best for everyone else, sacrificing himself to pursue some idealistic vision of someone in his life. 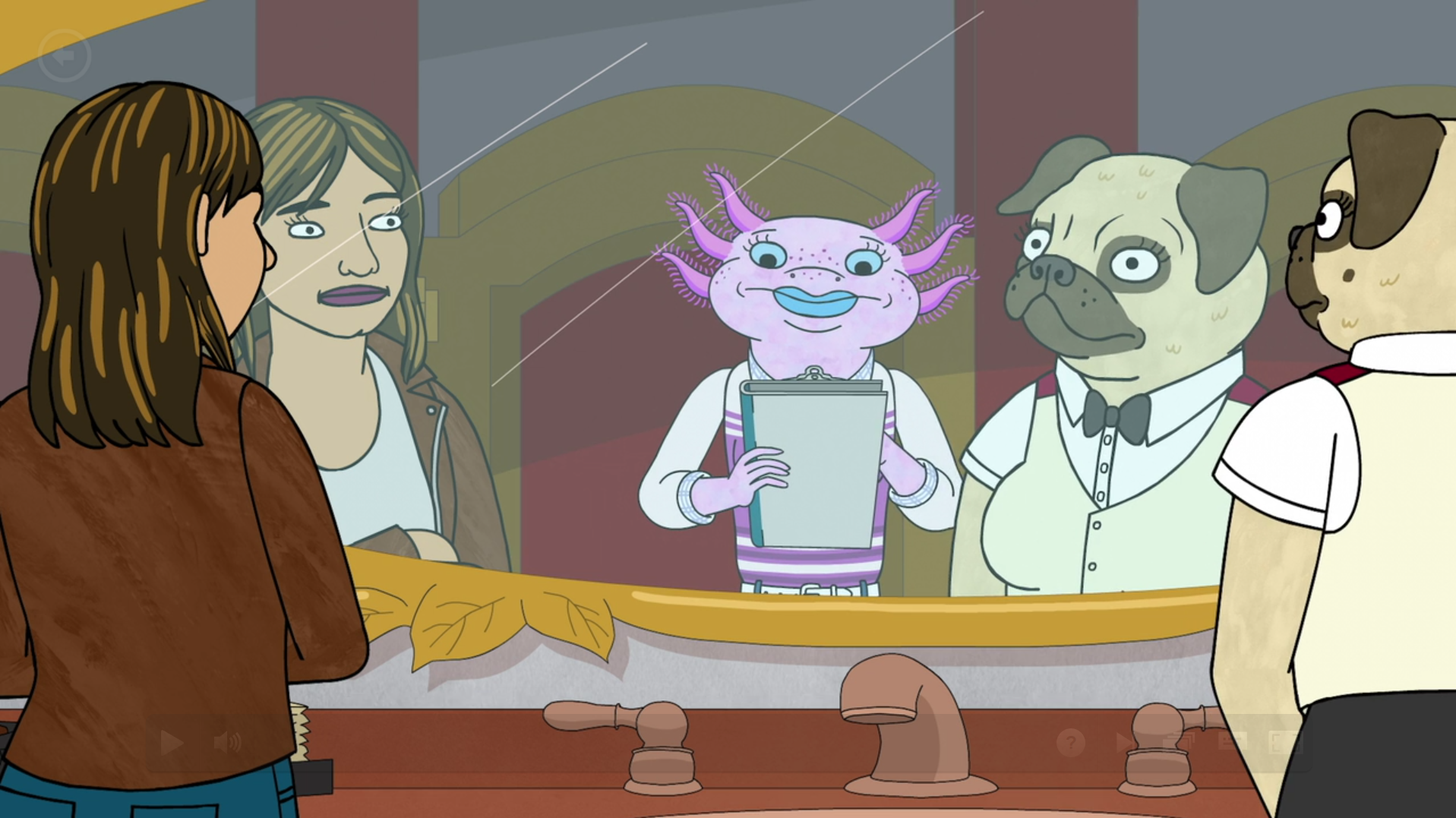 As always, he means well with his actions, but his selfish pursuit of righteousness affects Gina as it’s done everyone else in the past: he inadvertently causes someone to face an existential crisis he himself is avoiding, in this case coming up against his own professional mortality. BoJack’s never been told he isn’t good enough for something, but his fears of inadequacy plague his life; and by pushing for Gina to perform in front of Flip and Princess Carolyn, she comes face to face with her own limitations. Telling BoJack she probably wasn’t good enough was one thing; when she explains her desired career trajectory early in the second act, she’s speaking from a place of experience, but not one of rejection. She recognized she probably wasn’t good enough, and settled into a solid, lucrative career of TV work: but as we all do with childhood dreams, a small part of her still tugged at the unknown. Could she make it on Broadway?

There are many lessons to be offered on BoJack Horseman, but the dangers of ambition are often one of its most poignant (I mean, it is set in LA for a reason). The old adage of “you miss 100% of the shots you don’t take” is one I heard a lot through my athletic years, and it’s one I often think about when watching BoJack: it is utter bullshit, of course, but it is the kind of fatalistic hope Hollywoo is built on, designed to crush the dreams of a thousand Ginas, just so one BoJack has the opportunity to shine. Some people aren’t forced to realize their limits; BoJack’s spent the entire series running from his own, and yet still finds himself pushing others to the edge of the same existential cliffs; in this case, however, it’s just not as effective as in stories past. 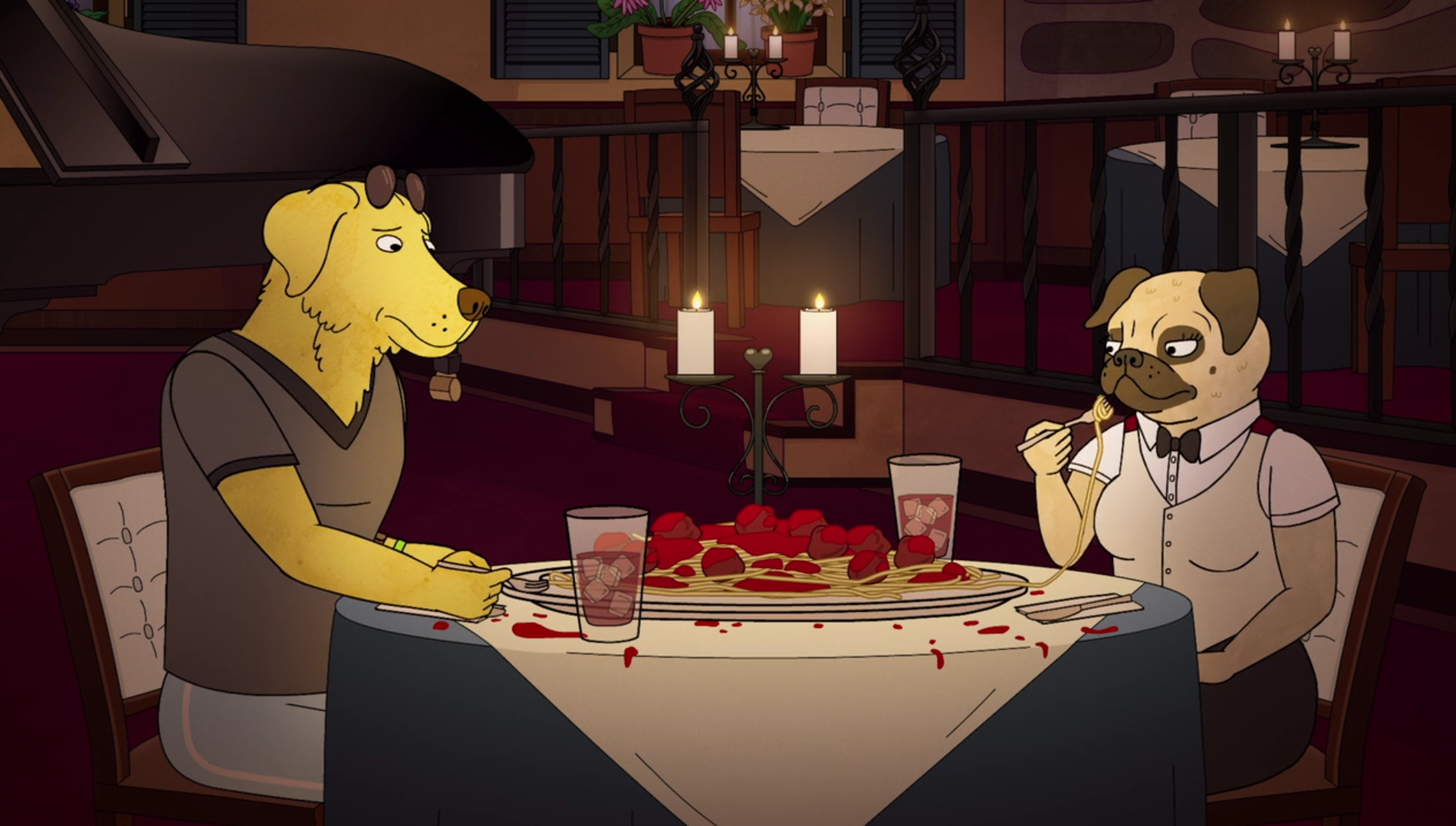 Part of this undercooked feeling comes from this story catalyzing in the third episode: there isn’t a strong foundation for Gina as a character yet, so the delivery and immediate crushing of her Broadway dreams does not exactly get the pathos offered other characters on the show. Nevertheless, the story with Gina just feels kind of flat: partly because we’ve seen this story before, so to conclusion is openly telegraphed, but mostly because it is supposed to act as the foundational story for the themes of the episode, and just doesn’t deliver on a level the B and C plots needed it to. I’m not cold to the plight of Gina, of course, but “Planned Obsolescence” doesn’t offer a whole lot to distinguish Gina’s story from the many, many other stories cut from the same cloth we’ve seen over the seasons (Princess Carolyn in season one, his trip to New Mexico, trying to “mend fences” with Herb Kazazz, the old dragonfly at the lake house whose name i can’t remember), and as a byproduct, isn’t nearly as effective.

There are strong building blocks for the larger narrative devices of the season in “Planned Obsolescence”, but the episode’s final moments, closing on a montage of characters watching fireworks ending with Mr. Peanutbutter kissing his new girlfriend (long story short: we get a weird, semi-conscious “is this too soon?” story, which only seems to be in this episode to justify the existence of Mr. PB’s new relationship), neatly tying the episode together with the visual metaphor of a small, beautiful explosion, one with the power to take one’s breath away, and also light one’s entire arm on fire. Ambition is a dangerous thing for a single person to manage; throw a second person into the mix, and the combination of individual ideas is enough to cause a goddamn disaster. If anything, “Planned Obsolescence” closes the episode on a clean visual, tying off a decidedly disappointing episode with a wonderfully apt image of what happens when one’s good intentions infect someone’s dreams with reality; it can be wonderfully revelatory, or it can be absolutely devastating.

– “it’s confusing, which makes it daring and smart.” We see you, Westworld.

– Todd makes numerous jokes about an anus made of marzipan, which sums up the efficacy of this story pretty succinctly.

– What would you rather listen to; your ex-wife talk shit about your failed marriage, or a new 21 Pilots single?

– this episode’s troubling sign for BoJack: he doesn’t realize he’s in the bathroom on set, mistaking it for the one in his own house.

– the episode’s most genuine moment comes when Mr. Peanutbutter admits most of his marriages have failed because his partners have gotten bored with him.