BoJack Horseman‘s fourth season ended on a rare emotional high note for its titular character, a small moment of redemption in direct contrast with the melancholic endings for just about everyone else in Hollywoo (save for Woodchuck Coodchuck-Berkowitz, with new hands and old job back). A glimpse of hope in the night, however, is not exactly a shining beacon of happiness, a point made very clear throughout “The Light Bulb Scene”, BoJack Horseman‘s fascinating fifth season premiere. As the lines between BoJack’s personal and professional personas continue to dangerously bleed together, “The Light Bulb Scene” offers an interesting metaphor for the double-edged sword of opportunity, the fine line between personal redemption and damnation BoJack’s failed to walk time and time again in his life.

Though slightly removed from the gloom of season four’s final stretch, “The Light Bulb Scene” makes no attempt at trying to disguise the creeping darkness lurking on the edge of its main narratives. BoJack’s reluctance to dive into his own psyche reaches new lows as he discovers his new show Philbert (the series Princess Carolyn fraudulently signed him up for) is unintentionally a show about himself, a cynical drunk whose penchant for isolationism leads him down dark, dangerous, and wildly misogynistic paths. This alone is heavy enough to anchor an entire season: the opening and closing scenes speak for themselves, blurring the line between BoJack’s life and career, and hinting at a new level of psychological exploration for BoJack to explore. After spending four seasons exploring BoJack’s damaged mind, heart, and genetics through the people around him, “The Light Bulb Scene” suggests season five will offer the most nakedly honest exploration yet –  a sentiment suggested in numerous scenes before BoJack’s actual nude scene on the set of Philbert.

Season four posited the question of whether BoJack could be good, offering a satisfying answer by suggesting that everyone certainly has the opportunity to do good, but to be good is something so subjective and amorphous, that trying to chase it down is maybe not worth it. Of course, being an objectively bad person has its consequences, and BoJack uses the fascinating lens of Hollywood (perhaps the purest embodiment of compromised morality in America, outside of the nation’s capital) to explore a core existential struggle. “The Light Bulb Scene” doubles down on that, nowhere more apparent than with BoJack himself, who is (mostly) trying to control his drinking, his ridiculous meltdowns, and his general asshole-ishness, for the sake of the few relationships he has in his life (which at this point, are few – even Todd doesn’t know he’s on a new series until after it’s started filming). 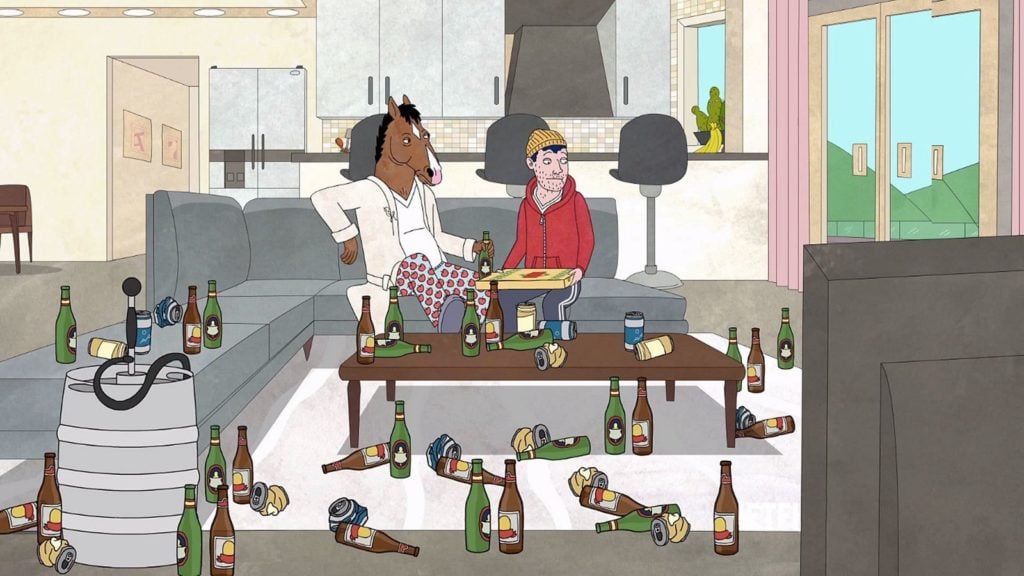 “The Light Bulb Scene”, wonderfully crafted by writer Kate Purdy, expands this idea a bit further to bring characters like Todd and Princess Carolyn back into the fold: how does one find personal fulfillment in life? Is it by having crazy experiences all the time? Is it sacrificing one’s life savings to fill an emptiness in one’s heart? Is it being financially successful or being memorialized by society? BoJack, being one of the smartest shows on television, knows there isn’t a definitive answer – for all our proclamations of self-definition, of our moral stances and how we perceive ourselves in the world, finding true happiness and purpose in the universe is elusive, difficult, and at times, dangerously harmful when we inevitably fall short in some way. Princess Carolyn always thought she’d be a mother, and she’s sacrificed a relationship and a whole lot of money to fulfill that vision for herself: and while on the surface, it seems guaranteed to give oneself a sense of pride and happiness, it is ultimately a substitute, one of many compromises we are forced to reckon with as we mature from dreamy children to pragmatic adults, navigating the often-disappointing journey of trying to evolve.

This isn’t to say “The Light Bulb Scene” isn’t without its lighter moments, but even Todd’s story in the episode is centered around a man who wanders the world without purpose, and how unsatisfying that’s been for his character over four seasons of television. In addition to blurring the lines between BoJack’s realities to examine both an individual’s psyche and the psychology of an industry (the manipulative tactics we see Rami Malek’s Flip McVicker employ are frighteningly relevant, and ominous), season five of BoJack also looks inward to the relationship between show and audience, Yolanda’s disappointment with Todd’s aloofness chief among them. After years of exploring just how self-critical we, as people, can be to ourselves, BoJack is holding the lens up to itself, throwing shade at its own shortcomings in what amounts to much more than a masturbatory, hollow exercise: by critiquing itself, BoJack is only further sharpening the satire it offers against the entire film industry, a development I’m quite interested seeing flourish over the next eleven episodes.

After last year’s run finished with an explosion of narratively ambitious, emotionally devastating episodes, “The Light Bulb Scene” is a tightly crafted return to (relative) normalcy for BoJack Horseman, re-establishing its central world in a number of meaningful ways. On the surface, it all seems relatively simple: Diane returns from a trip, BoJack starts a new job, and Diane begins the adoptive process. But in Hollywoo, nothing is ever easy: and the uphill climb all these characters face in the wake of their new “opportunities” posit a number of exciting new avenues I can’t wait to see BoJack explore. 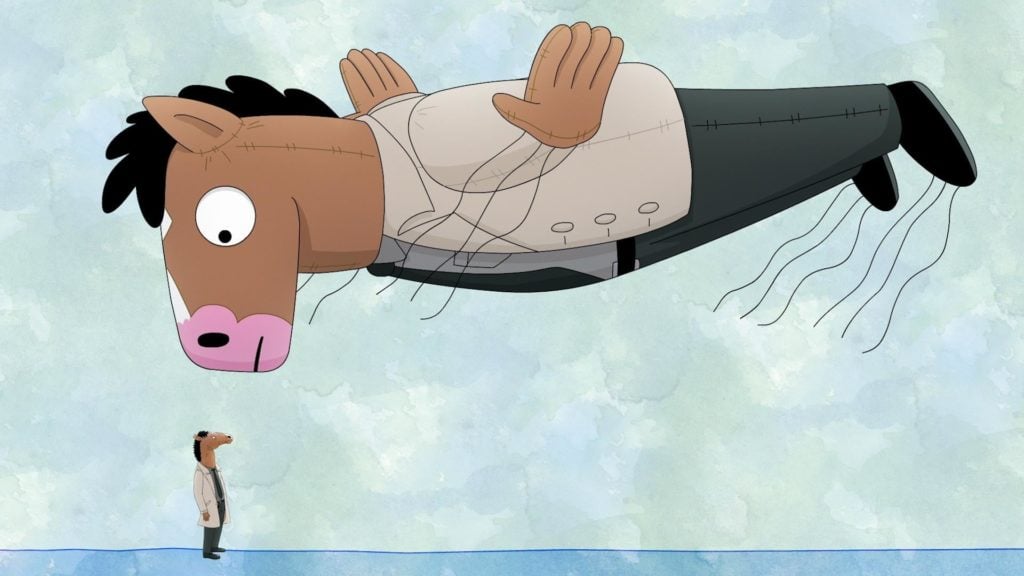 -welcome to season five of BoJack Horseman! Over the next two weeks, I’ll be covering each episode of the new season here at Goomba Stomp.

– for all the fun of Philbert‘s on set difficulties and Mr. Peanutbutter’s on-set pop-ins through the first two acts, the final minutes of “The Light Bulb Scene” are emotional anvils: Mr. Peanutbutter’s career is failing (as his marriage already has), Flip’s casual misogyny gives way to something much more fascist and sinister, and BoJack’s desire to be loved is already challenging his flimsy attempts at moderation.

– I’m sure BoJack sleeping with his co-star Gina (new recurring star Stephanie Beatriz, yet another Brooklyn 99 alum) is going to end well.

– the set of Philbert looks exactly like BoJack’s house, a combination of McVicker’s vision of desperate isolation, and the fact the set designer went to one of Todd and Princess Carolyn’s Boreanaz House tours.

– Gina’s character on Philbert is named Sassy Malone, a woman who hates bras and loves cold rooms. BoJack is holding absolutely no punches with the portrayal of her character, and it is appropriately scathing.

– the blurred line theme is poignantly explored through the use of nudity on television, which is both wildly exploitative, and comes with all the internal and external double standards you’d predict.

– Philbert can only orgasm to a recording of his dead’s wife voice, a nod to the first season when BoJack could only orgasm to the sound of his own character’s voice (who you’ll remember dies in the series finale, a moment BoJack even says was probably too dark for Horsin’ Around).

– yes, Todd’s clowns are still on the loose.

– “Take that, our marriage!” is probably the single darkest reaction I’ve ever heard to a divorce.

– “This is going to be a sensational season of television.” I can’t fucking wait.