What’s the best way to totally croosh the major life trauma of severing a bond to another human being? Can one forget their supposed soul mate by losing themselves in another culture? Does seeking out the friends we know will indulge our bad habits (at least, for a little bit) actually help in processing grief? Is there peace to be found in forging a new identity, or pretending to laugh it off until it doesn’t hurt so much anymore? The answer, of course, is much more nebulous than that; as Diane realizes in “The Dog Days Are Over”, another powerhouse episode of BoJack Horseman, the only cure for a broken heart is the same cure for Todd’s frozen tongue – the slow, painful, haunting passage of time until the numbing effect of sadness slowly begins to subside.

Diane’s Ten Steps to Dominating Divorce, the backdrop of “The Dog Days Are Over”, is not an eternally self-defeating exercise, however. As Diane stumbles through the initial weeks of her breakup with Mr. Peanutbutter, BoJack Horseman slowly offers glimpses of a Diane coming to terms with the end of her marriage. The predictable crisis of identity presents Diane with the rare opportunity; to run away from the external problems of her life in Los Angeles, while still being able to fulfill a personal journey of self-definition she’s craved since the early days of season two (when she was negotiating to write a book about a self-gratifying war “hero”).

Or in the very least, attempt that journey: Diane certainly lost herself in Vietnamese culture, though, as she often did in her marriage to Mr. PB, she kind of let it happen to her. She couldn’t bring herself to wear the traditional garb she’d bought when she first landed in Hanoi, and instead just pretending to be a local to ignorant Americans wandering around the city (or shooting a Hollywoo action franchise film with Laura Linney, of course). Alone in a strange land, Diane found herself falling into old habits, allowing the world around her to define her, like last season when her position at Girl Croosh turned into her raging against the machine of her husband’s foolish run for governor. BoJack certainly wasn’t a very helpful guide in the days and weeks before her trip, but the lack of any sort of emotional anchor in Vietnam drove Diane right back into her worst tendencies, even though she was always acting with the best intentions. 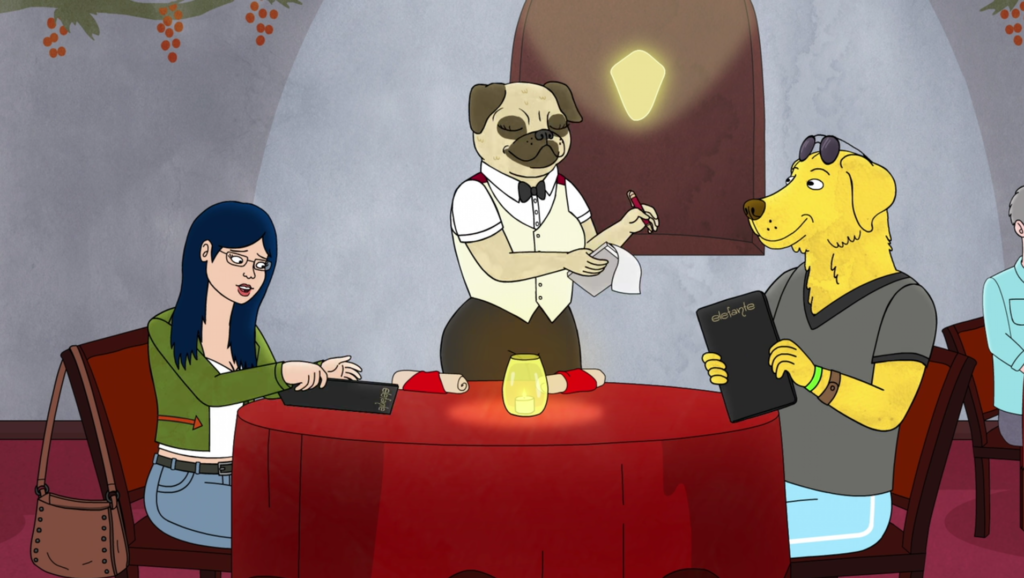 As painful as it is to watch Diane struggle through grief (especially considering the note it ends on), Diane’s ultimate declaration that at least she’s able to survive alone strikes the kind of raw, honest tone only BoJack Horseman offers. As sad and low as that final moment feels, it’s also Diane’s first real moment of strength in the episode, the first moment where she stops letting others guide her, and she begins to build her identity in her own image. Knowing there’s not going to be a moment of clarity or happiness that involves Mr. Peanutbutter again is a dark moment we all experience with a lost love; and though it often takes a long time to process it, the simple knowledge of one’s ability to survive those traumatic moments are impact in rebuilding a sense of self.

Because that’s really what happens at the end of an important, lasting relationship: the phrase “two become one” is a laughable trope, but it rings true in human relationships, be it marriages, important friendships, or even casual acquaintances. The severance of those bonds, as inevitable and repetitive as they can be through our lives, are the destruction of the very things that define us. We often view ourselves, as people, in the context of those around us: there’s a comfort in the confirmation of self, the understanding the others see us as the way we see ourselves. The loss of that presents a crisis of identity; because after all, if we are who we thought we are, all relationships would last forever, right?

As Diane wanders through Vietnam, struggling to connect with her heritage, fellow Americans, and the people closest to her, the central thesis of “The Dog Days Are Over” slowly brings itself to the surface, offering a contrast to the popular ideal of the five stages of grief (aka humanity’s original shitty listicle). Like the rest of life’s challenges, there is no straight line from sad to happy: the cycle of happiness and sadness is a raging river of bullshit, and it is a supreme struggle to fight against those emotional currents, especially when the anchors, both physical and mental, are suddenly severed and gone. It’s why we often make terrible, damaging mistakes in the face of great traumas; processing these things is not as simple as a lengthy vacation across the world, or a haircut, or telling our closest friends that we’re just fine. Diane knows she’s making the right decision for herself; but as that truth becomes an idiom to repeat in her loneliest moments, it never makes the experience any easier.

The right thing often hurts like hell; the facade of Hollywoo (and Hanoiwoo) cinema lets Diane believe in the false prophet of narrative resolution, that there is a definitive light at the end of a long tunnel of depression and doubt. Masterfully, “The Dog Days Are Over” never reaches for that single, definitive moment; instead, it recreates the twisted, confusing mosaic of emotions and suggests that maybe, the best way for us to begin healing is to let shit just be ugly for a little while. 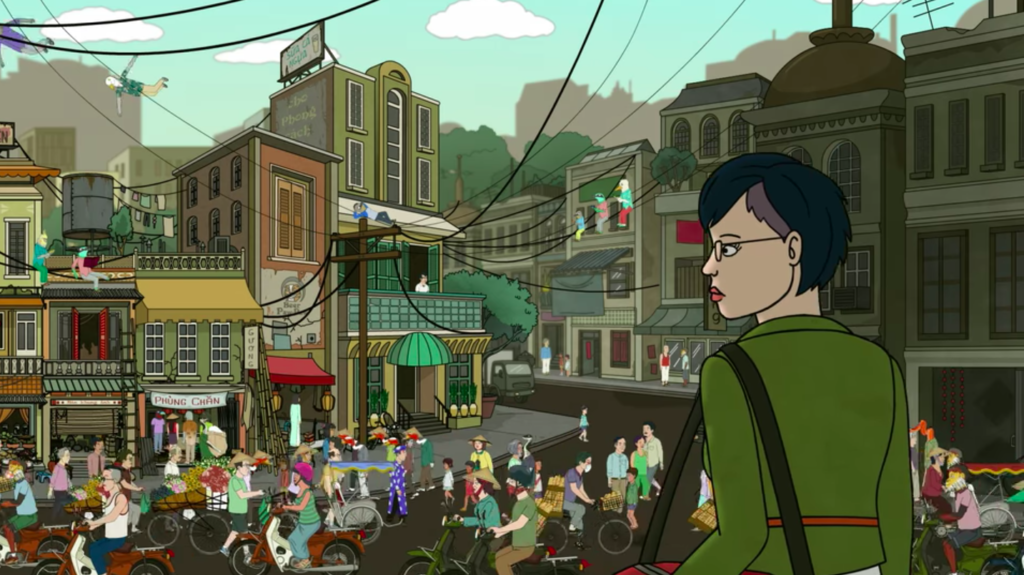 As effective as this episode is emotionally, however, it’s worth noting how often it attempts to engage with Diane’s Vietnamese heritage, but never feels like it can find anything tangible to tether it to. Though I’m not of Vietnamese descent, it’s clear “The Dog Days Are Over” wasn’t written with the intent of tapping into some deep historical knowledge of Diane’s cultural heritage; the score over the opening sequences are an unfortunate beacon of the hollow engagement this episode offers when it comes to portraying Vietnamese culture.

Admittedly, it’s not the goal of the episode to be a history lesson, but how often the episode teases and then immediately retracts from a more serious, honest engagement with the country and its relation to Diane, makes it feel a bit weaker as a framing device. Though this facade of knowledge almost works on a meta level, Diane’s carefully constructed mirage of happiness falling apart parallels the episode’s own struggles with a deeper, more complete understanding of Vietnamese culture, and how it is important to Diane’s journey (like, say, Diane’s various goals and identities waging war on her very soul, which both halves of Vietnam suffered through time and time again over the last 200 years).

Cultural shortcomings aside, “The Dog Days Are Over” is a strong character piece for Diane, a nice bit of redemption for someone who’d slipped into the background at various points during season four. It is always fascinating to see how BoJack Horseman explores very specific brands of grief and how they spiral into existential crises; the death of a marriage is but one of a long line of moments where BoJack’s understanding of humanity’s self-defeating nature crystallizes into poetic clarity. “The Dog Days Are Over” may not be the most effective example of this through the series, but the emotional roller coaster ride Diane experiences hits particularly hard, if only because it is the second episode of the season, which means there is still plenty of room for things to spiral downward from here.

– “That screen’s my supervisor” might be the most single terrifying line in the history of the series.

– interesting detail “The Dog Days Are Over” mentions, but never returns to: Diane’s father was a professor of history at Tufts University.

– “I need younger, newer, fresher words to FEED THE BEAST!”

– Todd’s subplot is the most inane, lazy subplot ever, and I absolutely adored it.

– “I’m a sad, sad girl with a terrible, dirty apartment.”

– we should not take the sight of Stefani “accidentally” exterminating the entire IT department lightly.

– “You learn that you can survive being alone.”

‘Forza Horizon 4’ – Accelerating Away From The Competition

That was really insightful, especially the part about how we define ourselves and the identity crisis that can occur when relationships end. Thanks.