There are many devastating episodes of BoJack Horseman, but few are as powerful and crushing as “Ruthie”, the fourth season episode about Princess Carolyn’s very, very bad day. Seeing her unyielding optimism slowly crumble as her personal and professional lives fell apart is one of the show’s most brutal episodes, ending on a knife twist so sharp, the closing moments still bring tears to my eyes. “The Amelia Earhart Story” isn’t quite as darkly poignant as “Ruthie”, but it is a notably strong entry for BoJack Horseman‘s fifth season, dropping the pretense of the show’s overwhelming focus on industry critique for a much more focused, subtle exploration of BoJack Horseman‘s most interesting character, giving the show’s humor and pathos some necessary room to breathe.

Framed around Carolyn’s trip home to visit with a prospective birth mother in her quest for adoption, “The Amelia Earheart Story” is an important entry in Carolyn’s backstory, giving great depth to some of the more harrowing emotional moments of “Ruthie”, and even back to other Carolyn-focused episodes, like season one’s “Say Anything”. Given that Carolyn is a woman who, by nature of her career and natural disposition, is always looking forward, “The Amelia Earheart Story” is important because for once, it forces Carolyn outside of Hollywoo and back to her home town, the kind of town where time moves really slow, and often, the first memories waiting to greet us there are the worst ones. 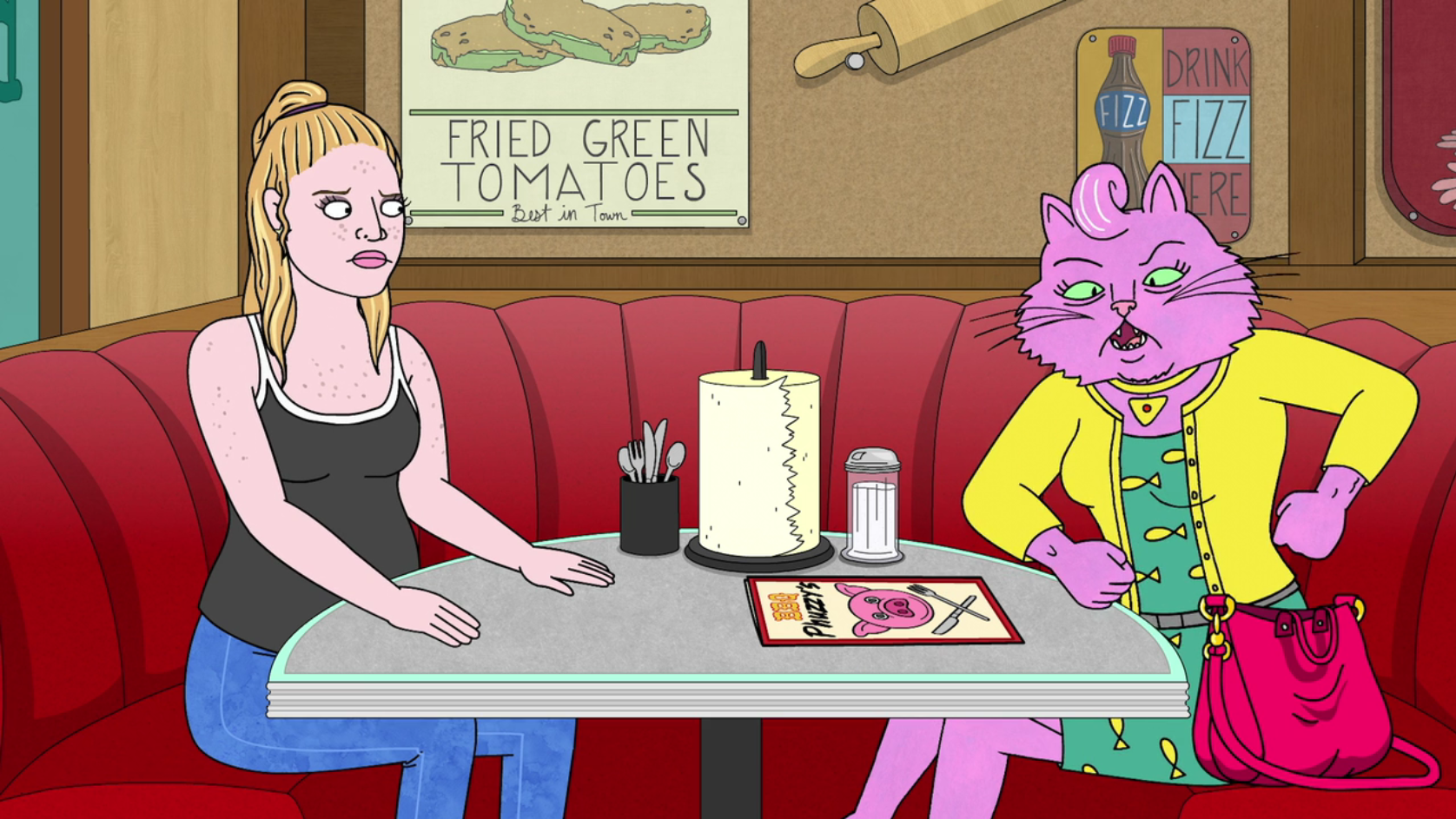 BoJack Horseman could’ve had Carolyn meet the first potential mother of her child anywhere; going home to Eden, North Carolina is a deliberate and difficult choice for the show to make. With her mother dead and her father long gone from their childhood home, bringing Carolyn back to Eden requires the show to jump through a few hoops to get Carolyn to turn around and look back, even if only for a short trip. She has good reason not to go home; the only thing waiting for her there was the same thing haunting her in Los Angeles, only with the voice of her mother ringing stronger in her head. But, strong-willed as she is, she forced herself to travel across the country to get some hush puppies at Phuzzy’s and meet Sadie, a young pregnant woman with no idea what to do with her life.

How Carolyn projects herself onto Sadie in this episode is powerful; she clearly thinks this is her opportunity to save someone from the horrors she was subjected to, the opportunity for her to save herself by saving someone else. And because of that, she sees Sadie as someone she needs to convince, prove that she isn’t a fraud or not worthy: that’s why she lies about going to church, and about Sadie’s clothing at the flea market. She’s trying to prove to herself that she’s worth it; if she can convince Sadie, then everything her mother said about her being a failure was wrong, and 18-year-old Carolyn might be able to get a second chance to be happy. A fan of old Hollywoo films, Carolyn has cast herself as both the victim and savior in her own story – but as it turns out, the true existential conflict Carolyn faced with herself was her ability to face the truth. 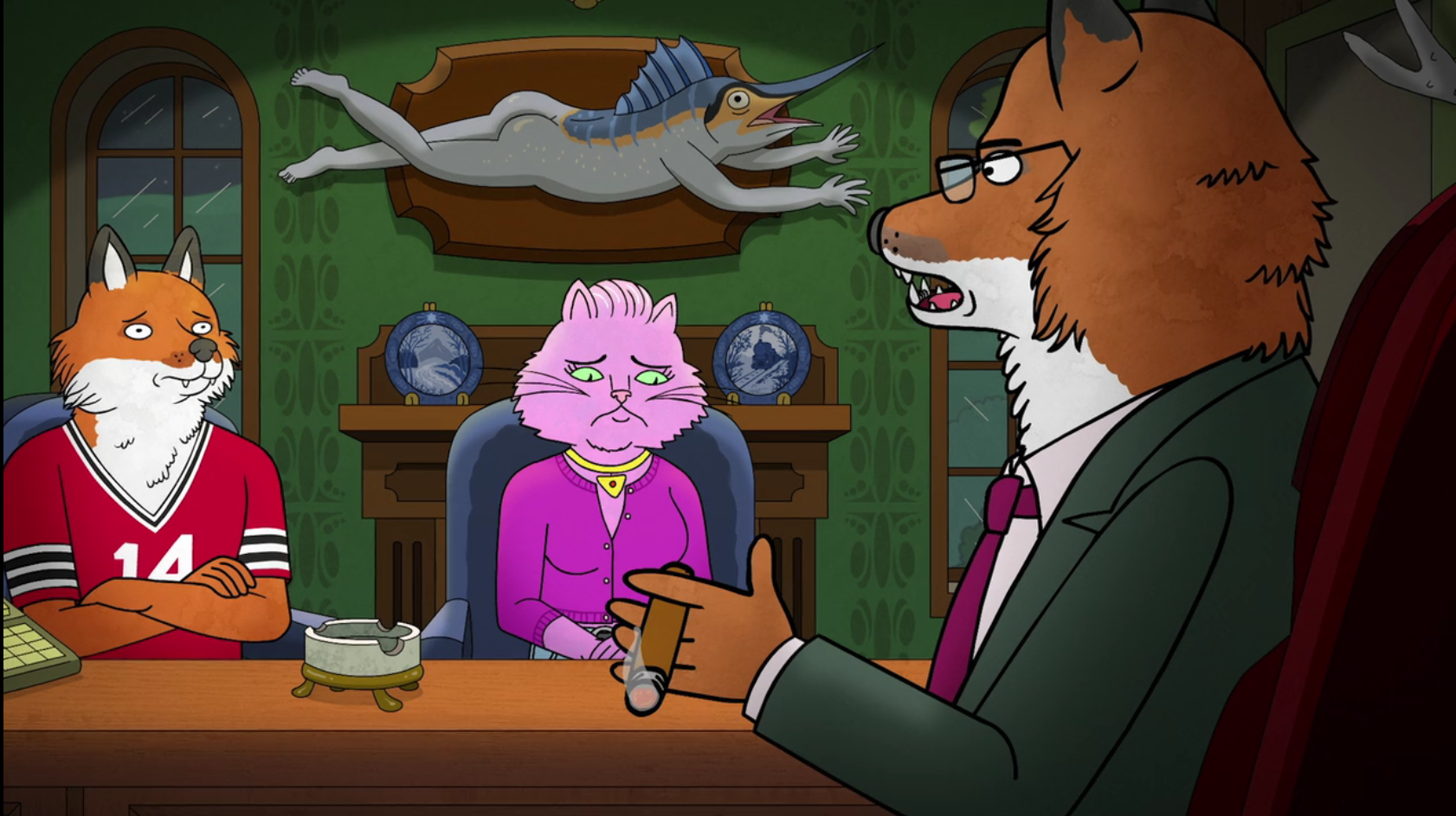 Every episode of the series, we see Princess Carolyn pushing someone’s shit around, often trying to push said shit off a cliff, or at least onto someone else’s plate; even when she leaves Los Angeles, she’s trying to shovel BoJack’s bullshit into a manageable pile, or any of the other smelly deposits left on her desk by her clients, or in the case of Todd, random dudes with prison tattoos and a heartwarming smile. If you spend 24/7 pushing shit around for everyone, even if you’re not a bad person yourself, eventually you’re just going to smell like shit: and after listening to Carolyn try to manage her insanely demanding professional life remotely, Sadie can’t bring herself to adopt to someone so seemingly callous and dishonest.

However, BoJack Horseman views Carolyn’s approach to life as something more nuanced; the flashbacks of her youth, culminating in her first miscarriage with the son of the family who employed them, shows that Carolyn’s approach is not based in cynicism, or blatant attempts to be evil. Like we saw in last season’s “Ruthie”, Carolyn is never willing to let go of her dreams, at any cost – because if those dreams ever came true, she could ride off into the sunset at the end of her own Hollywoo tale, a self-made woman who survived through the shit in her life simply because she believed. Because of that, she pushes herself to extremes; continuing to try and get pregnant or always believing she can conquer the Hollywoo world on her own terms. 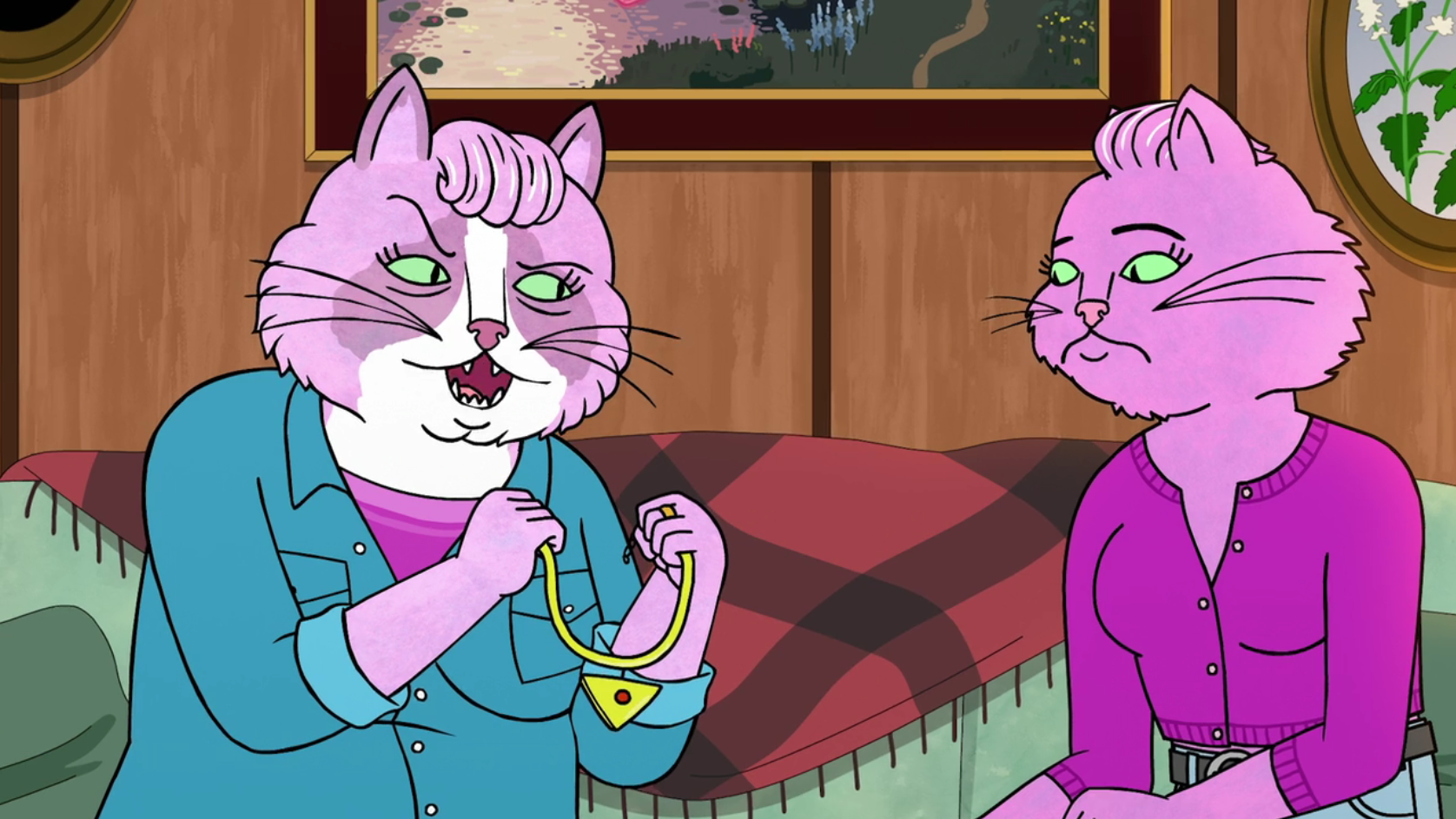 Her absolute resilience is admirable; but it often comes at a cost, especially when trying to adopt her beliefs for people who don’t deserve it (like her relationship with BoJack, always wiating for him to stop being such a shitty person and grow up). Like the fake necklace her mother gives her, Carolyn will always hold onto the possibility of something true and pure,  even if she knows it’s complete bullshit.

Although it mostly operates on Carolyn’s known qualities, seeing her develop that internal perseverance adds another layer to perhaps the show’s most layered character: and that’s why it’s so hard to watch her go through her first miscarriage, which comes with the double whammy of being rejected by the snobby family who reluctantly built a “rewarding” life for her when she first got pregnant. Even though it is something that can be seen coming a mile away, her mother’s resentful dismissal of her experience, combined with Sadie’s rejection of her as a mother, is still a strong double whammy to bring home the reality of the situation: sometimes, wishing isn’t enough for something to come true.

It also circles back around to Carolyn’s reluctant journey home, and what it means to return to a place where the world once seemed limitless; the disappointment of returning to the places where you had dreams of your own future, only to realize so many of them never came true, is a difficult thing to reconcile. As BoJack‘s explored time and time again, regret resonates much stronger than success, and a series of personal reckonings for Carolyn’s first trip home in years makes “The Amelia Earhart” story one of the weightier episodes of the season so far.

– Back in Hollywoo, BoJack Horseman royally fucked himself up, falling off a roof during a stunt initially brainstormed by Carolyn and Diane.

– “Todd, we’ve been over this: lakes don’t have emotions.” “What about Ricki Lake?”

– “From means you don’t have to be there anymore.”

– Is there a single parent on BoJack Horseman that isn’t an absolutely toxic piece of shit?