“INT. SUB” presents itself as a fairly typical episode of BoJack Horseman, a completely capable, if indulgent, attempt to recreate the goofy chaos of earlier, less emotionally heavy seasons of the show. However, it’s placement in BoJack‘s uneven fifth season raises the stakes for the episode, which mostly uses its framing device and opening acts to deflect from the deep flaws at its construction, a number of contrived stories that are unfortunate distractions from the episode’s rather strong central thesis.

There’s a lot going on in “INT. SUB”; unfortunately, it feels like most of it is a distraction, biding time until pushing back the veil and getting to the good part.

The overarching theme of “INT. SUB” is boundaries, personal and professional, and what happens when we cross them, a unifying idea that is only strong in the third act, and only in a few stories. Simply put, the Todd/Carolyn story of the episode is pointless, an empty satire that only exposes the episode’s framing device – a couple detailing their work days by mixing up the identifying traits of the main characters – for the superficially clever element it is. 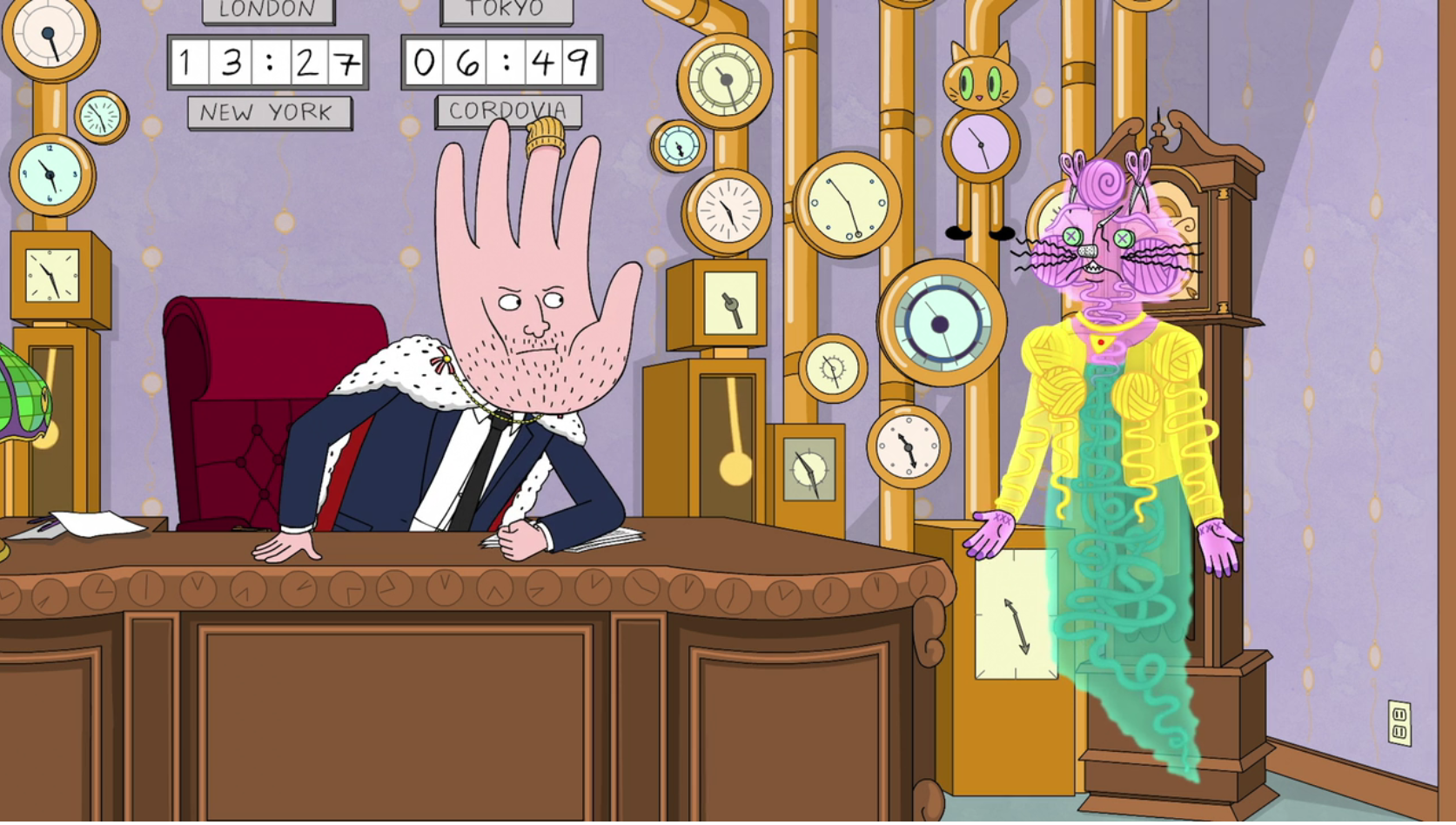 Even after rewatching the episode a second time, I struggled to find what purpose this story served: surely there are better ways to use Wanda Sykes and Issa Rae than narrators for underwhelming BoJack stories with a surrealist visual bent. I mean, Carolyn is called “Tangled Fog of Pulsating Yearning in the Shape of a Woman”, a name that feels novel and ludicrous in the typical BoJack fashion – until it is repeated over and over, a constant reminder that the visual creativity of the episode is only skin deep. More frustratingly, the conflict between them just isn’t good: it’s obvious from the word go what the final frame of this story is going to be, and although it features a nice moment of friendship between the two at the end (“I think it’s called… rahnt?”), a lot of this story brings up the more disappointing elements of “BoJack the Feminist” and “Free Churro”.

In fact, it seems to represent a growing pattern for BoJack this season: ambitious character arcs that are buried in scripts that ultimately feel like inventive writing exercises. And if we’re being honest, the Carolyn/Todd story is only inventive visually: the “draw the line down the middle of the apartment” is something a thousand comedies have done in the past, and the utilization of the trope in “INT. SUB” never finds a way to really justify its presence. Maybe it’s a harsh reading of a time-wasting B-story, but it feels emblematic of the issues haunting BoJack Horseman so far this season: there are certainly good stories being told, and powerful character moments being reached, but the paths to these stories are disappointing enough that the endings aren’t quite feeling earned.

These shortcomings are only magnified with the larger plot of “INT. SUB”; as Diane struggles to deal with the damning audio Ana gave her earlier in the season. When Diane tells BoJack she wants some space from him on the advice of her therapist, an already-spiraling BoJack takes his beef directly to her therapist. This predictably sets off a chain of events where Diane eventually forces BoJack to confront his darkest secret indirectly, further blurring the lines between BoJack’s real life and Philbert – a thoroughly effective, haunting culmination of events, but one that doesn’t land quite as effectively as it theoretically should. 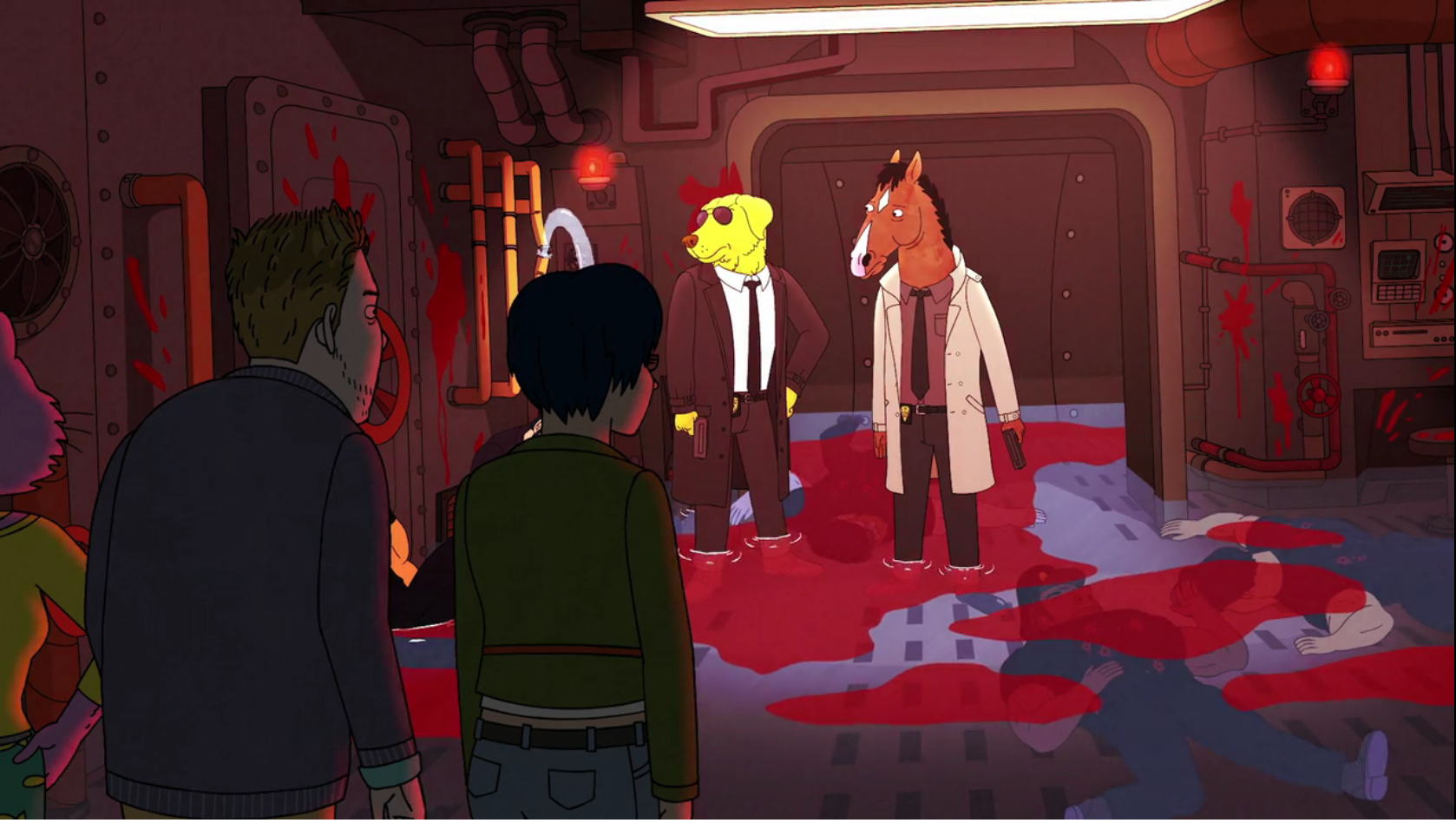 The problem here is one Diane addresses herself in the episode: although BoJack can be given a bit of leeway given the recent death of his mother, his abusive ways once again prove that he’s not ready to evolve into being the better person he thinks he is. This is a necessary development, of course – at some point, BoJack Horseman was going to bring up the New Mexico incident in some meaningfully way, because duh – but the only way “INT. SUB” is able to find its way to its climatic moment is by following the abundantly familiar path of abusive, destructive behavior we’ve seen BoJack employ dozens of times. On one hand, this is the most logical approach to take: destructive behavior is often a pattern of terrible traits, and it’s no surprise BoJack would process his own grief in the most damaging way he possibly could.

On the other hand, it forces a certain regression on its characters in order to line everything up for the final scenes of the episode, an uncharacteristic display of BoJack Horseman stretching itself too thin, a rare exposure of the narrative seams holding everything together. Diane’s progress is buried under BoJack’s regression, repeating the themes of “BoJack the Feminist” to even less effect, even further hindered by the jarring, empty humor of the “alternate” reality of the episode.

BoJack not respecting Diane’s boundaries, and Diane not realizing BoJack’s mental boundaries are completely broken, is exactly the kind of emotionally tense friction BoJack Horseman thrives on. Again, the framing of the episode as a conversation between two irrelevant characters (a try hard mediator, and a terrible therapist) does the character work a disservice: the unnecessary visual gags create a degree of separation from the material the episode just can’t recover from, even with the strong final two minutes of the episode. 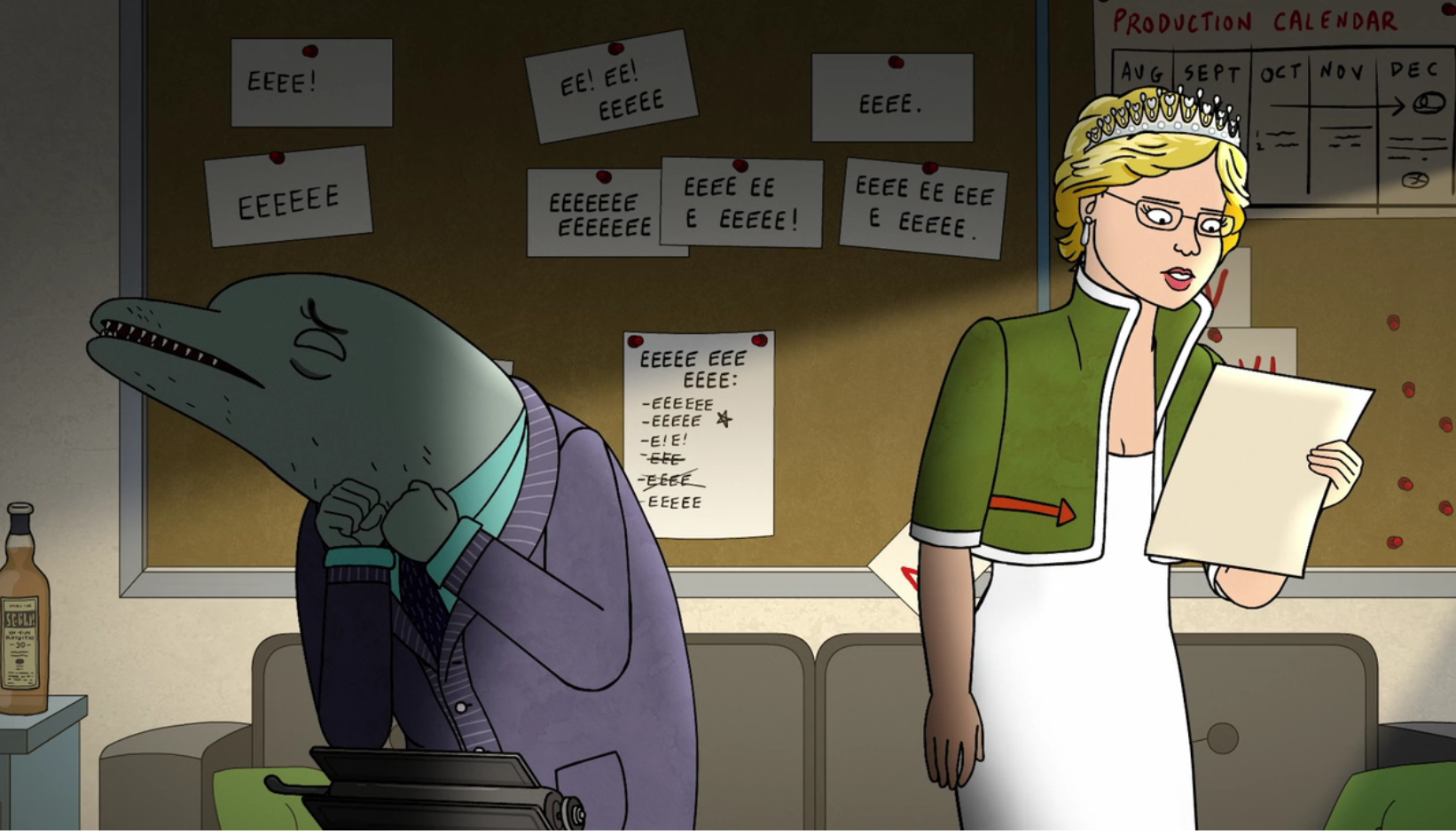 Other characters, like Mr. Peanutbutter and Flip McVickers, are left to pick up the scraps, developments that are equally depressing, silly, and a touch overwrought. Mr. Peanutbutter suddenly realizing his parents are dead is another “feels like early BoJack” kind of stories: it’s supposed to mostly serve as a fluffer for BoJack’s more devastating arc, an discouraging turn for a character who finally stood poised to be offered some real, tangible development this season (at least in the earliest episodes). In harmony with the other events of “INT. SUB”, Mr. PB’s story finds underwhelming means to intriguing ends – the existential crisis he faces is interesting, but not as exciting given how it gets to its culminating moment.

An episode about pushing boundaries, “INT. SUB” is an important inflection point for the season: in many ways, “INT. SUB” sees BoJack pushing its own limits a bit too far. Everything about this episode feels like too much and not enough, all at the same time: there’s too many jokes about Emperor Fingerface, and not enough moments of Diane and Carolyn dealing with the emotionally oppressive challenges put in front of them. There’s numerous “oh shit” moments of Mr. PB realizing his family is dead, and entirely not enough of those moments for BoJack and Todd, unnecessarily convolutions for an episode with a fairly strong central thesis about the dangers of crossing lines in personal, professional, and metatextual settings.

Even when we get those moments, however, they are in service of something lesser: Diane confronting BoJack through dialogue written for his character is undeniably something that will affect BoJack more than her, just as Carolyn’s compromise to please Todd ultimately serves his (much less interesting) arc.There’s a lot going on in “INT. SUB”; unfortunately, it feels like most of it is a distraction, biding time until pushing back the veil and getting to the good part. It’s some good fucking stuff, sure – but like in cooking, if the preparation isn’t on point, the entree is bound to leave a disappointing aftertaste, something the entire third act of the episode suffers from.

– another hit show Gina was on: The Murderstoppers.

– BoJack has a dream of being Philbert, another clear sign Diane’s indirect confrontation of him through a hastily written script is not going to go well.

– Deep down, I think BoJack knows he is more fucked up than Diane does – it feels a bit jarring to hear him say that he isn’t, though, and is one of the single strongest lines of the episode. Their relationship is partly based on recognition of each other’s dysfunction, but BoJack’s attempt to equate his behavior with hers crystallizes the events of “BoJack the Feminist” in an unexpectedly powerful way. It’s the one moment of this episode that really comes together, and it is offered so much more subtly and casually than the other themes of this episode.

– BoJack the Wokest Comedy mostly took this episode off, which works to this episode’s benefit – this season, BoJack has struggled to balance its attempts to self-commentate and correct, and simply just being a good, more socially cognisant TV show.