BoJack Horseman has never been a show to shy away from narrative experimentation before; in fact, the show’s taken the mantle once held by Community, as a show expected to do something wildly creative and memorable at least once a season. “Free Churro” is no exception, and arguably the most risky proposition yet: is it possible to stage 98% of an episode of an animated comedy series at one location, with the camera focused on one character, dealing with one single story? There’s no denying “Free Churro” feels like series creator (and credited writer) Raphael Bob-Waksberg challenging himself; and right up until the end, “Free Churro” does not disappoint. 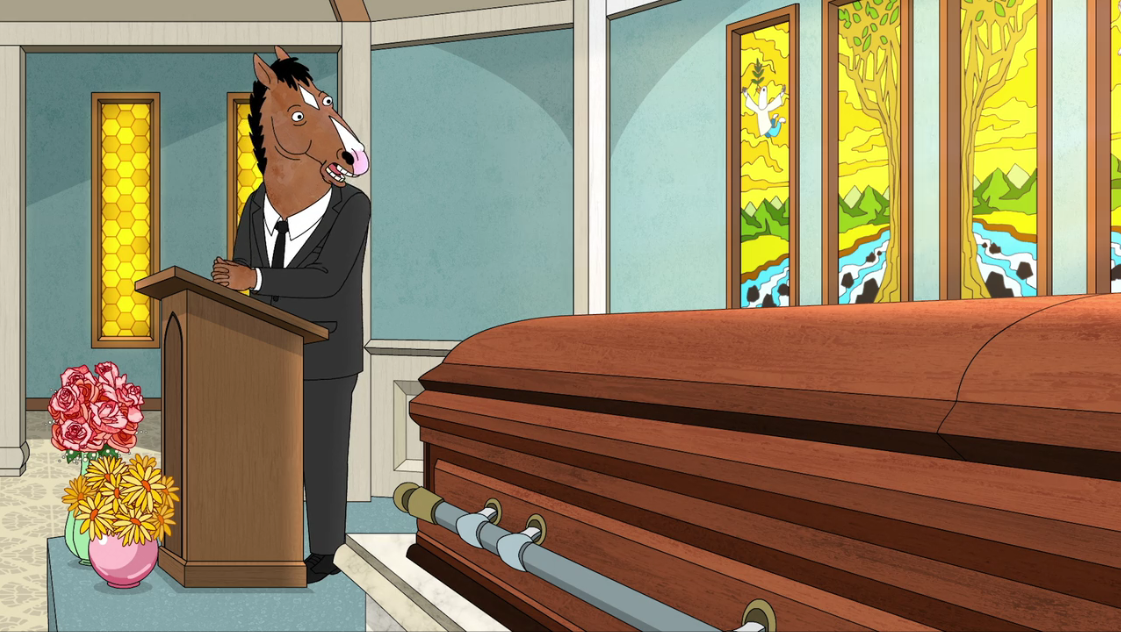 Completely isolated from the other stories and characters of his world, “Free Churro” is liberated from some of the early season’s less successful elements. Written as a 22 and a half minute long dialogue, BoJack’s meandering eulogy to his mother is the most natural the writing on BoJack Horseman‘s felt all season. Freed from the presumed responsibility to demonstrate its wokeness every two minutes, “Free Churro” whittles down to its main character in a way we haven’t really seen since his cabin trip during the fourth season. For better or worse, it’s BoJack’s show for the first time in awhile, and you can feel the show relishing at the opportunity to roam free, if only for a moment.

The dichotomy of “Free Churro” is tough to grapple with: despite its impressive ambitions and always-prescient meta narrative , the way it ends with such a figurative shrug of the shoulders is strange.

BoJack’s long, wandering monologue about the death of his mother, and more importantly, how it affects him, is an extremely powerful mediation on grief and remorse – but it’s also kind of a disappointing end to Beatrice’s presence on the show. The episdoe builds and builds, but only to a moment that basically describes the entire story of season four: the things we don’t do are the things that haunt us for eternity. Seeing the unrealized potential in something is also something BoJack faces in this episode: but his comparison of his mother’s death also speaks to Sara Lynn’s own demise in season three, a melange of personality traits and talents that never meshed into something the world would truly remember. Poignant as it may be, BoJack’s speech ends up feeling like a very moving, wonderfully written retread of the show’s most powerful moments.

The easy answer of why, of course, is that the episode is constructed to be the ultimate lack of payoff it can be; as BoJack says himself, if he comes to a meaningful resolution and moves on with his life, there’s really no more story to tell. But let’s be honest: that’s a bit of a cop out, and not a theory I particularly subscribe to. I think “Free Churro” does believe, in a subtle way, that BoJack’s reaction to his mother’s death is an evolutionary point for the story – and the season to follow may very well bear great fruit from this idea. 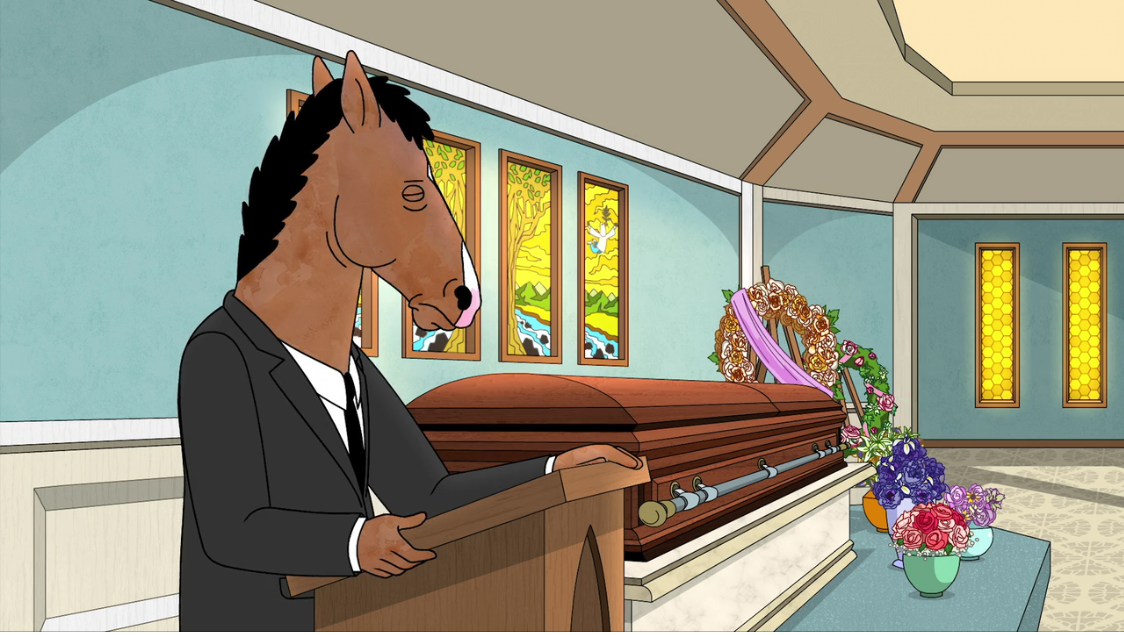 However, there’s nothing contained within the frames of “Free Churro” that feels like much of anything but an extremely creative writing exercise; most of what BoJack says touches on themes and ideas this show spent most of the last two seasons exploring. And how it ends is basically Herb Kazazz 2.0: BoJack’s sadness is derived from never saying the things he wanted to say, and now those opportunities are gone.

This doesn’t mean “Free Churro” is a weightless half hour: driven by Will Arnett’s strong performance (literally carrying an entire episode by himself), BoJack’s eulogy to his mother is a messy, emotional ending to one of the show’s core stories. Beatrice was a woman whose disappointment with the world could never outweigh her disappointment in herself, the dissonance driving her to become the sharp, bitter woman who neglected her own son, mostly because of what she saw in him, that she also saw in herself. The world was not kind to Beatrice Horseman, nor was she kind to it: BoJack’s speech may only reflect the latter half of that for most of its running time (save for a haunting story about her love of dancing at social events), but the knowledge of Beatrice’s character through the seasons gives levity to the jokes around her cruelty, and reinforces the risk that without her character, BoJack Horseman itself might be worse off. 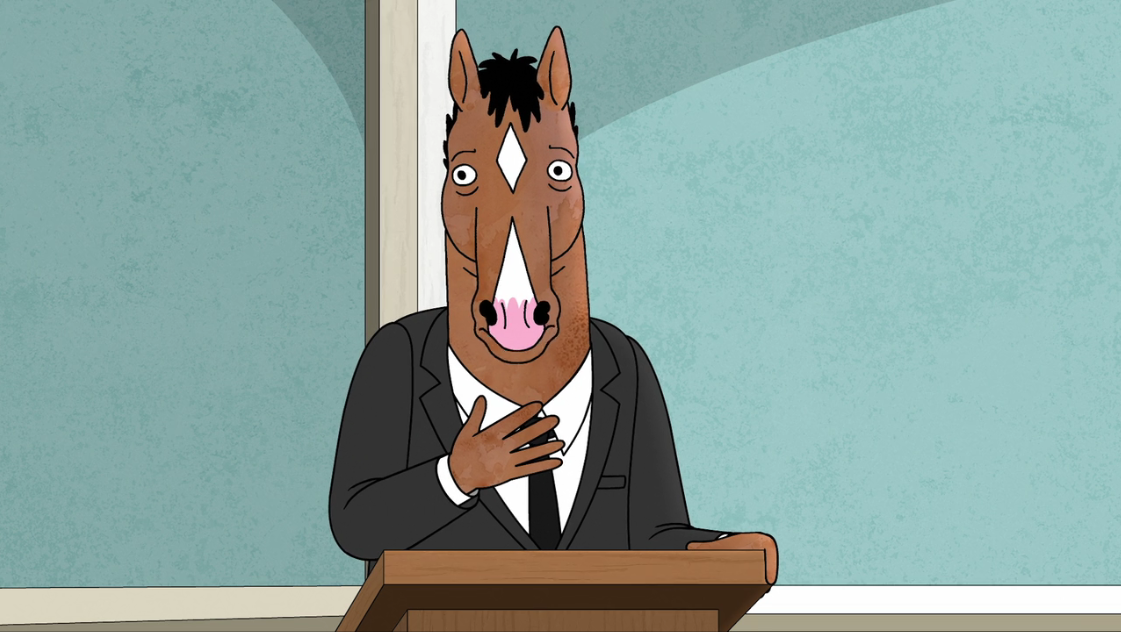 Still, it feels like “Free Churro” is only able to get two-thirds of the way there, recycling the old beats of their dynamic without one last, twisted glimpse into their relationship (as we were offered with Herb and Sara in the past). And something about that feels particularly cynical, even for BoJack Horseman: in a season that’s already begun on a series of dark notes, it’s not a promising sign that “Free Churro” is so openly withholding, and so brazenly nihilistic at what is crafted specifically to be an Important Moment for the series. Again, it doubles down on the notion that this episode is holding things back, to catalyze other stories later in the season: and given its placement in the season, and Beatrice’s non-presence in it to this point, I have to wonder what is the rush?

The dichotomy of “Free Churro” is one to grapple with: despite its impressive ambitions and always-prescient meta narrative (which basically asks – how does this show end, except with BoJack dying?), the way this episode ends with such a figurative shrug of the shoulders is strange… fitting, but strange, given how quickly the stakes of this season have been raised. I guess it’s just the nature of death: whether the passing of a friend, a fictional character, or a story line, there’s no easy path to a satisfying, resonant ending, or in most cases, an opportunity to find a deeper meaning.

-on one hand, I love the final moments, and how it mirrors the surprise ending of “Fish Out of Water”: it really captures the meaningless nature of BoJack’s speech, given more to himself to an audience that doesn’t care, and to a mother that can no longer hear him. Then again, it feels once again like BoJack employing an old trick to lesser effect.

– “You were a huge bitch” is not something you expect to hear at a mother’s funeral, though maybe it should happen slightly more often? Certainly spices up the proceedings.

– boy, the storyboarding for this episode must have been a royal bitch.

– BoJack’s continuing to lose sense of time, and he is now drinking with his pain medication. This is going well.

– BoJack never read his father’s shitty novel, a stark contrast to BoJack’s presence at his mother’s funeral: he was willing to try and find clarity in their relationship, but couldn’t bother to do the same with his father, who dedicated his life to whatever drivel is contained in those pages. Maybe BoJack finds peace with the events of “Free Churro”; it is clear he’s not going to be offered the same opportunity with his father, at least not in the near future.

– BoJack is comfortable saying “Herb Kazazz, also dead”, but he can’t bring himself to say the words “Sara Lynn” and “dead” in the same sentence. That is the kind of material I was hoping to see the third act engage in, but never did: the reveal that BoJack is still morbidly torn up about Sara Lynn’s overdose while lying next to him, is such a powerful moment, anchoring a character awash in plot and narrative gimmicks in a very promising way.

– how did BoJack’s father die? He tripped right before getting into a duel with a man he allowed to challenge him. He was turning around to ask him if he’d even read the book, and smashed his head on a rock. He didn’t even lose the duel; like his failure to publish his book in any meaningful way, he never even made it to the big stage to fight for his life, or his legacy.

– I think this episode is the first time we learn BoJack’s exact age: for those keeping notes, he is 54 years old.

– “I’m your son. All I had was you.” Even when it isn’t quite hitting on all cylinders, BoJack Horseman will still rip your heart out of your fucking chest.