Given we’re now in the fifth season BoJack Horseman, an episode like “BoJack the Feminist” is no longer a surprise – be it “Thoughts and Prayers”, “Brap Brap Pew Pew”, or any other number of entries, seeing BoJack dive into cultural critiques deeper than its constant Hollywoo razzing is nothing new to this point. Over time, in fact, there are moments where it feels like the show’s need to say something Important about a cultural hot point drowns out the normal rhythms of the show, often to the detriment of the characters in front of it. In the context of BoJack‘s complicated history with hot-button topics, “BoJack the Feminist” is a fascinating case study of the show’s approach to so-called “controversial” topics, and why they often end up feeling like well intentioned mixed bags.

Why “BoJack the Feminist” doesn’t completely come together for two and a half acts is not because it is a poorly crafted episode: on the surface, it is a well-delivered story about Vance Waggoner, the amalgamation of every piece of shit male that’s appeared in the news over the past two years, for their abhorrent behavior during the last five decades. His character (voiced wonderfully by an underutilized Bobby Cannavale) is constructed with the careful comedic touch we’ve come to expect on BoJack: he’s an anti-Semite who starred in a Sandy Koufax movie (a very famous Jewish baseball player), beat his wife, insulted Swedes, sexted a 12-year old, told his teenage daughter he was going to kill her, made slurs against Native Alaskans… BoJack really lays it on thick with Vance’s rap sheet, distilling every shit bag we’ve heard about recently (and in the case of very clear influences like Mel Gibson and Louis C.K., for decades) into one man. 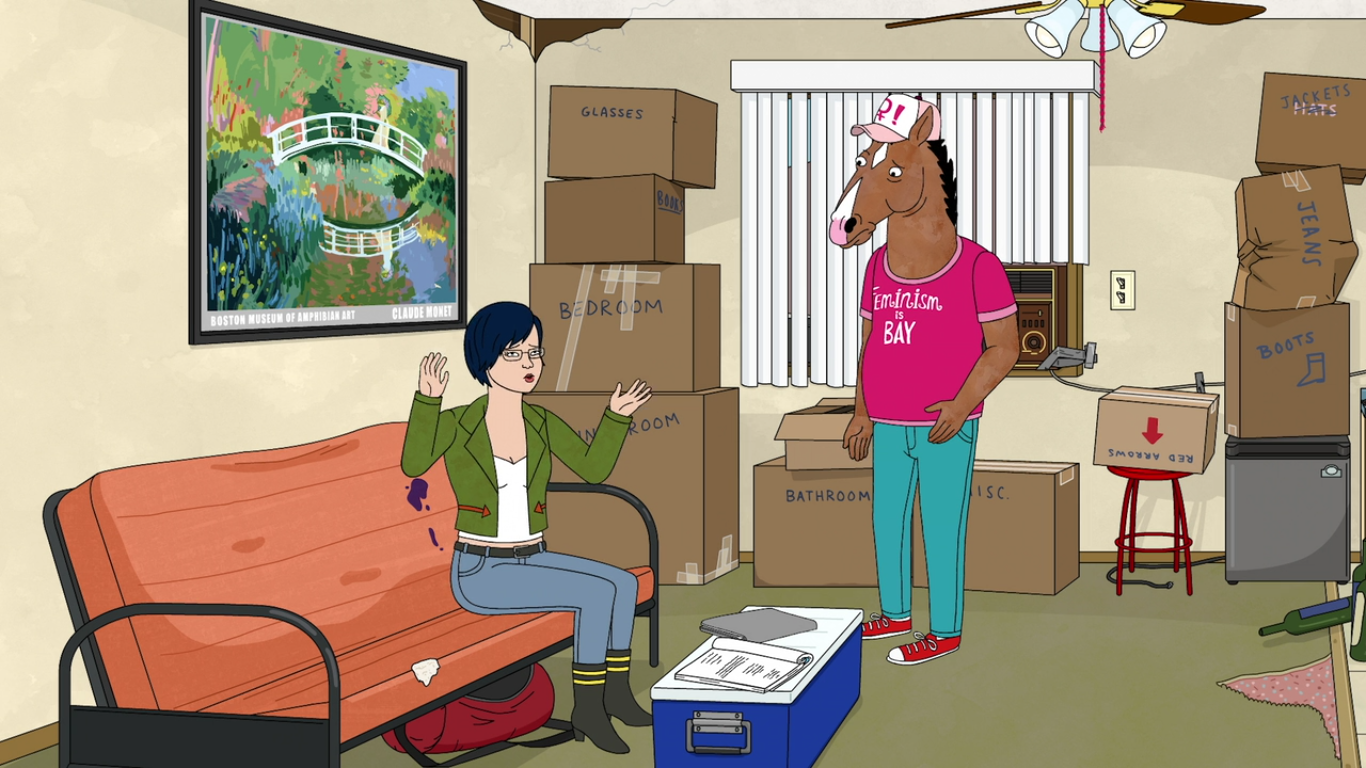 Vance’s journey through multiple public rehabilitations harkens back to “Brap Brap Pew Pew”, and how the story’s escalating zaniness gave voice to the biting critique of the events and people it was parodying: as the allegations pile up, Vance’s reputation, and inability to learn anything from each round of rehabilitation, slowly begins to envelop itself in escalating BoJack weirdness – which, as it did in “Brap Brap”, allows it to act as a funhouse mirror to the reality of the situation it is satirizing. Vance’s continued ability to get chances in Hollywoo is fucking ridiculous; and yet, if you think about the career of someone like Sean Penn, it’s really not that crazy an idea, is it? BoJack‘s ability to present its own outlandish world as a mere half-step away from our own is one of its most powerful tools, never sharper than when distilling the nonsensical logic of Hollywoo down to its ludicrous, hypocrisy-ridden roots.

At the core of the episode is an interesting idea that feels underdeveloped until the final few frames: “BoJack the Feminist” is ultimately a referendum on its main character – and, perhaps by accident given when the show would’ve been in production, a great study case for 2018, and how quickly condemnation has turned into redemption for so many horrible men in the world. BoJack’s done a lot of shitty things – his fake attempts to be a feminist to cash in on social capital wouldn’t crack his personal top 20 – and since late in the third season, the show’s really focused on whether BoJack’s able to overcome himself in order to be someone better, and make amends for the many, many mistakes he’s made. Using the context of the monsters unearthed in the #MeToo movement, “BoJack the Feminist” pointedly asks a question it has only danced around in the past: does BoJack’s attempts to be better even matter? At this point, does he deserve forgiveness – and more importantly, why do we, as an audience and society, even want to forgive people like him? 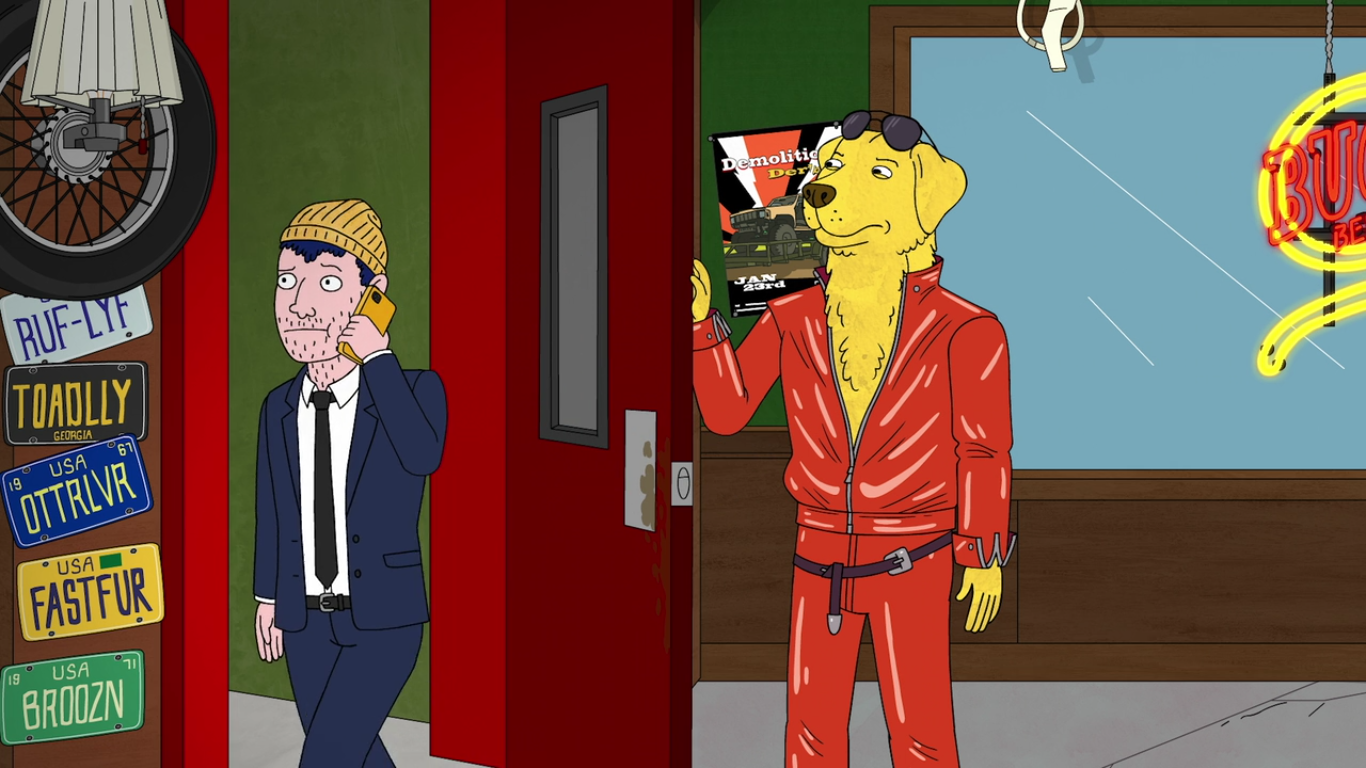 “BoJack the Feminist” attacks this idea from a number of different angles in the first two acts: Hollywoo’s hypocrisy comes through Princess Carolyn, the cynicism of Diane, and the aloofness of Mr. Peanutbutter, whose B-plot about trying to present himself as a tough guy presents a nice parallel to Vance staging multiple apology tours to paint himself as a “nice guy” (in the end, Mr. PB proves that just as long as you’re good looking, wealthy, and male, opportunities will more than likely find their way into your lap). But it’s not until the episode turns that mirror against BoJack does it feel like its story really comes to life; but by that time, the story is over and the credits are rolling (playing the original BoJack closing theme for the first time in a long time, signaling an earlier descent into depressing territory than earlier seasons).

The revelation is powerful, but “BoJack the Feminist” would’ve been a lot more effective had this episode used the debate it creates around BoJack as the core, rather than Vance Waggoner, a character who ultimately is just a stand-in for shitty men, and a catalyst for the episode’s numerous, overtly pointed monologues about women’s rights, normalizing misogyny, and the indestructible hierarchy of the patriarchy. Diane perhaps fares the worst here, her character mostly marginalized as a (very well informed, and very well written) feminist who speaks in tweet threads, rather than actual dialogue. There are multiple scenes where BoJack pauses to make a number of great, prescient points, but rather than highlight the debates it is exploring with them, it castrates any and all momentum to preach to the audience, which at times, feels a bit self-defeating. 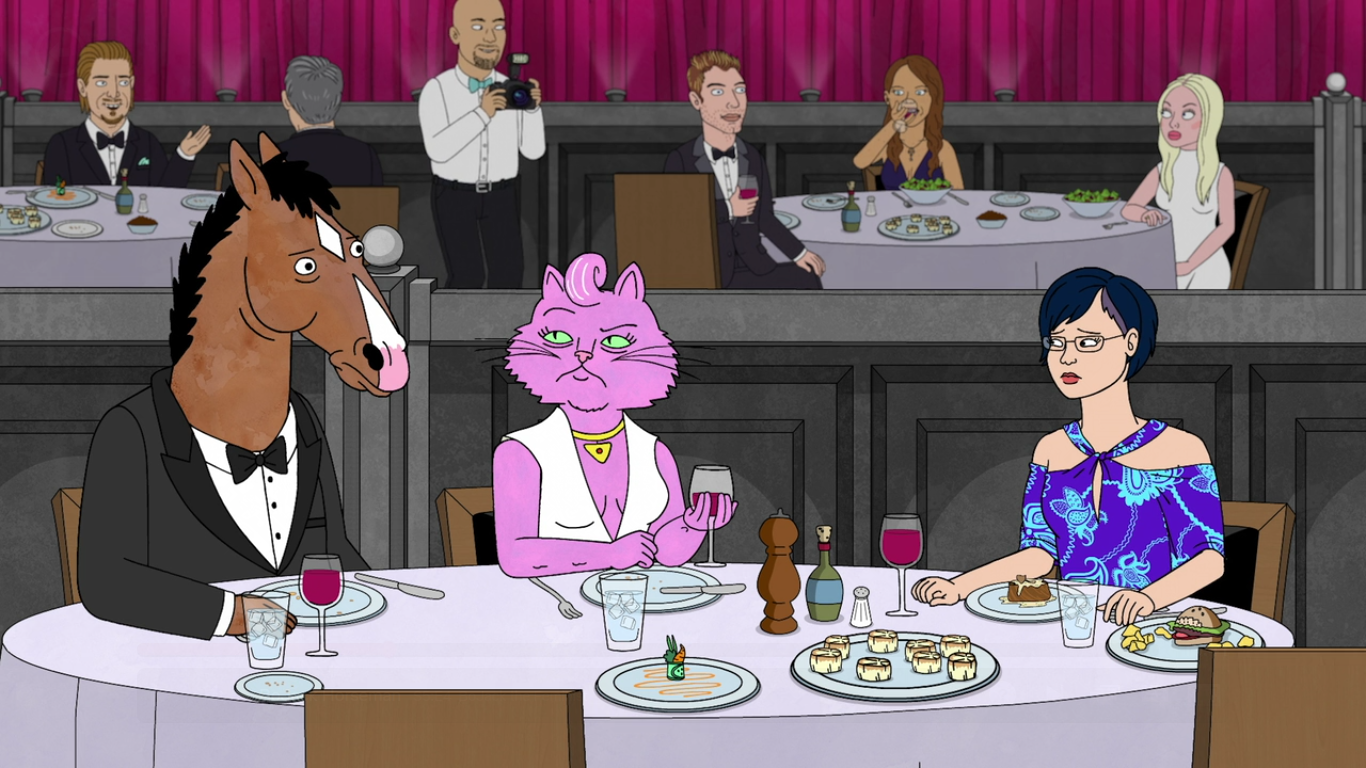 There’s a lot to love in “BoJack the Feminist”, but it never reaches the insane heights of “Brap Brap Pew Pew” or “Thoughts and Prayers”, feeling more like a continuation of “Hank After Dark”, a sequel that doesn’t offer much in its first 24 minutes, except updating the language and appropriate cultural touchstones for 2018, before finally tying everything together in the last thirty seconds (Ana Spanakopita remains the most frightening character on all of BoJack, by the way). While the argument the episode makes about women and their horrible mistreatment in every facet of life is powerful, necessary, and sharp, there are a number of moments where it doesn’t quite feel like an episode of television, where the veil is pulled back and the pure anger in the heart of the writing room is revealed, naked voices that spring up out of the spring as some of the episode’s most dissonant, preachy moments.

Maybe that kind of blunt, look-at-me-when-I’m-fucking-talking-to-you approach is necessary; I recognize that as a white male (one of many who wrote about this episode, an irony that is not lost on me), my perspective on this episode is bound to be a bit skewed… but societal context aside, there’s something about “BoJack the Feminist” that doesn’t quite click for me, especially when compared to Very Special Episodes in BoJack‘s past. Ultimately, the episode gets where it needs to be, but until those final moments, the overtly self-effacing tone sells its well-constructed ideas short.

– the number of levels the “Feminism is Bay” shirt works on is the kind of genius we can only aspire to achieve.

– “I’m off to perceive depth in a Wes Anderson fillllmmm!”

– So Philbert is just True Detective season one, right? When they talk about the show using “feminism” to explore, and ultimately embrace, toxic masculinity at the cost of its female performers, I immediately thought of the nude scene in the first season. Yes, that one…. and now I can’t think of Philbert as anything but True Detective.

– “You get to drop in, and play Joss Whedon, and everybody cheers. But when everybody moves onto their next thing, I’m still here.”

– since guns are outlawed in Hollywoo’s California, the gun shop has been turned into weed store. Progress we can all get behind.

– BoJack’s faux pas du fromage is the absolute best way to describe what happened at the Forgivie’s, and reminds me why Princess Carolyn is my favorite.

– BoJack thinks NCIS is a person named Nikus, who just travels to different cities on each new show.

– Stefani talking about how people sharing and not reading is more important than them reading, is probably the most salient thing I’ve heard recently about the gig economy on the internet, and just how fucking horrible and soul-sucking it can be.

– Diane thinks her Prius locks automatically, a small character detail that might be my single favorite moment of the episode.

– I really wanted to close this review with some great pieces written by women on this episode… strangely enough, there wasn’t a lot to find. I did come across a couple great, informative pieces written by Jess Joho at Mashable, and Alison Herman at The Ringer.