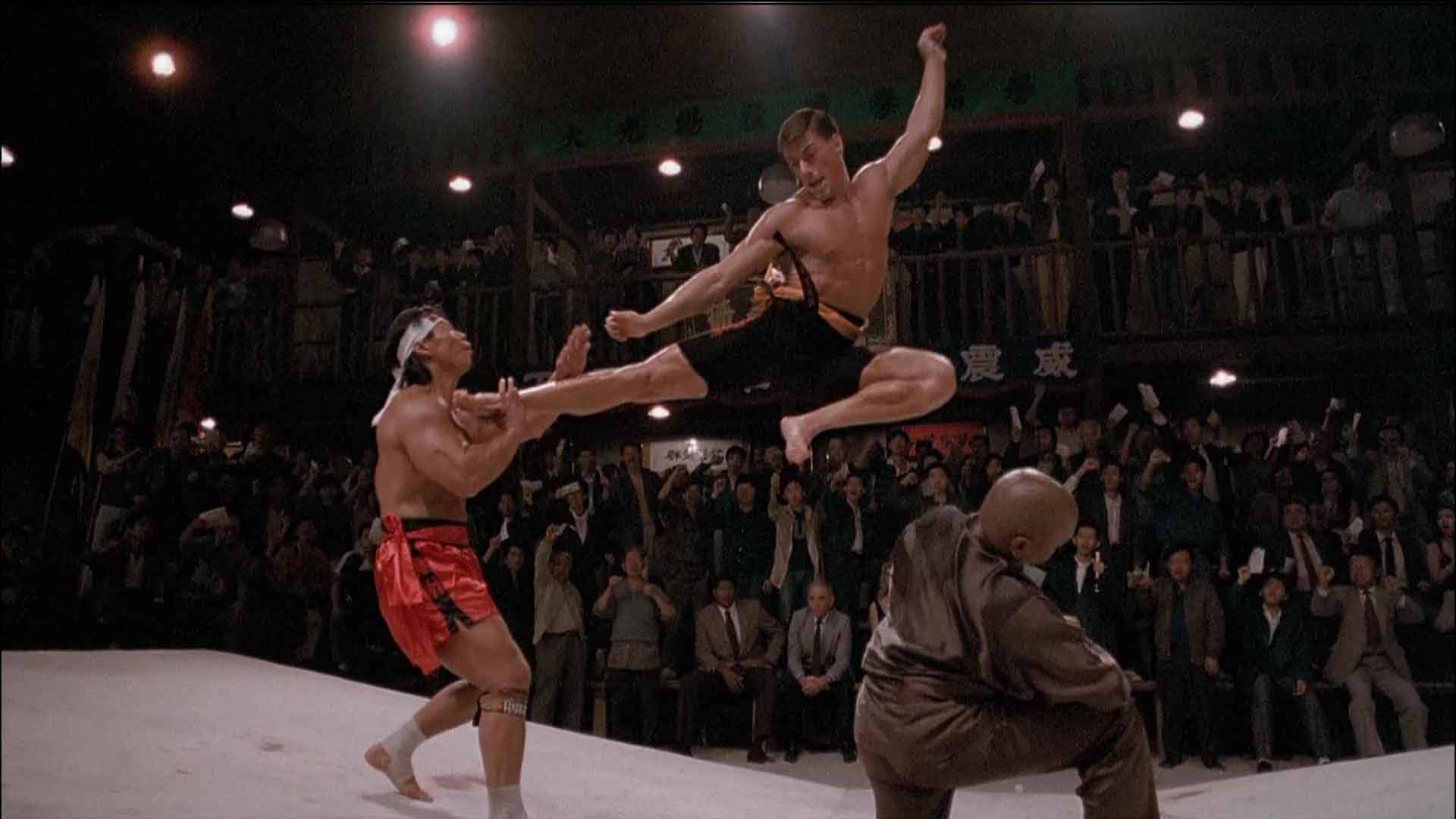 Every year in Hong Kong, an underground martial arts tournament is held in secrecy. The Kumite (a term given to a specific type of karate) is where the world’s best fighters come together on an invitation to prove their worth in full contact fights, no questions asked. United States Army captain Frank Dux (Jean-Claude Van Damme), having been trained under the auspices of Senzo Tanaka (Roy Chiao), has received his invitation to this year’s tournament and, against the orders of his immediate superiors, slips away from detection and travels to the Far East for the fight of his life. Once there, he meets fellow American fighter Ray Jackson (Donald Gibb) and nosy reporter Janice Kent (Leah Ayres), who wants a scoop on the action. Hounding Frank are two officers, Helmer and Rawlins (Norman Burton and, yes, Forest Whitaker), who must bring Frank back stateside for breaking army protocol. Frank’s other foe is a fellow competitor, defending champion Chong Li (Bolo Yeung), a nasty-looking rival who reportedly killed someone in last year’s event.

Newt Arnold’s 1988 martial arts endeavour Bloodsport aims to kill two birds with one stone. On the one hand, it represents the fictional depiction of one of the real Frank Dux’s many exploits as a professional fighter throughout his career as an undefeated (!) competitor. On the other hand, it properly introduces the world’s moviegoers to a man who would become synonymous with high thrills if largely low-quality films for the better part of the next decade: Belgian martial artist and newbie actor Jean-Claude Van Damme. In what would be a common theme regarding the majority of Van Damme’s films, Bloodsport features genuinely intense action whilst limping to the finish line to tell something mildly resembling a compelling story. What diversity the movie has to offer is limited to what transpires on the increasingly bloodstained Kumite mat. As far as plots go, Arnold and company barely have a handle on things, obviously more interested in exploring the many fun ways their stars’ remarkable physical prowess can be put on full display to inspire the viewers’ awe.

Some of the simplest plot developments are spectacularly botched, chief among them the picture’s love angle involving Frank and Janice. Van Damme’s comically wooden performance aside, the machinations of how the two falls in love is expedited to the umpteenth degree. When Janice offers a clear hint that she would like to sleep with Frank, it is pretty difficult to fathom why, other than her admiration for his perfectly sculpted body. Attempts at giving Frank’s story dramatic weight may be appreciated for the intent if not the execution. In flashbacks, the viewers learn that the protagonist became Senzo Tanaka’s pupil at a young age when he and some rascal friends were caught trying to steal a Kanata blade from the sensei’s home. When Senzo’s son died years later, Frank took on the mantle to defend the family’s honour. The hilarity is that all of this information is communicated in a 5-minute span when Frank, now an adult, awaits to enter his master’s room where the latter lies sick in bed. Frank stares at the Kanata blade, cut to a flashback, cut back to Frank starring at the blade, cut to a flashback, cut to Frank starring at the blade, and so on. Worse still is that the child actor portraying young Frank is just as terrible an actor as Van Damme, if not worse.

Curiously, the only reason why Bloodsport is 93 minutes is because of a side plot involving the two aforementioned American officers hunting Frank through Hong Kong. Together, these scenes eat up perhaps 15-20 of the film’s length, some of which have Helmer and Rawlins trying to extract information on the Kumite from Hong Kong’s chief of police. None of it is interesting, nor is it pertinent to Frank’s story. For what it’s worth, this provides Forest Whitaker fans with a glimpse into his early career, although the role doesn’t ask very much of him. The only highlight involving the two lawmen is an abnormally lighthearted scene in which the two give chase to Frank among traffic in the streets and over Bengal boats, concluding with both tumbling backwards into the water and Helmer spitting some out of his mouth like a fountain. It is absolutely terrible and therefore hilarious.

Few, if any, viewers will come to Bloodsport to see if Helmer and Rawlins catch their man, or to learn if Frank and Janice live happily ever after. Nay, Bloodsport’s raison-d’être is above all else to demonstrate what Van Damme is capable of, not as an actor but as a true fighter, a world-class athlete. Secondly, albeit not as impressive, the film aims to offer fans a glimpse into a hardcore martial arts tournament where competitors go at each other as though their lives depended on it, which, in some instances, they do. In these respects, Arnold’s picture accomplishes what it sets out for rather handsomely. Considering that even in 2014, Van Damme is still in tremendous shape (one need only catch a Go Daddy advertisement as proof), his late 1980s form was absolutely stellar. His famous splits are on display numerous times, as are his flips and lightning-quick roundhouse kicks. Make no mistake, Van Damme is fast when he wants to be, so much so that the film opts to showcase his movements in slow motion half the time. Some moments joyfully offer unintentional comedy, specifically when, in slow motion, the camera captures Van Damme’s intense reactions to knocking people off their feats. Bulging eyes, teeth on full display, cries of triumph: it isn’t supposed to be funny, really, but it ends up being so anyway. None of the other fighters impress as much as Van Damme, save perhaps Chong Li. This is a shame because the opportunity was there to showcase some amazing contests involving specialists from around the world, each with unique styles unto their own. There are moments of brilliance but presumably because Bloodsport is packaged as a Van Damme vehicle, the most dramatically memorable moments are reserved for the picture’s star.

Lastly, some praise should be awarded to the film for blasting some Stan Bush songs throughout its soundtrack. Certainly far from a timeless rock musician, Bush is an oft-overlooked artist mostly remembered today for, believe it or not, songs he contributed to the Transformers: The Movie soundtrack in 1986. Hearing some different tunes during Bloodsport is quite a bit of fun. They are egregiously on the nose in some cases whereas in others, such as the foot chase scene, tonally inconsistent. Some may see this as ironically enjoying a section of the film, but if it produces a huge grin on one’s face, then how bad can it be?

Let no one be confused as to what sort of film Bloodsport is. Despite its farcical attempt at building a love story and a mediocre stab at a tale of honour, Arnold is mostly interested in making Van Damme look as awesome as possible. When a Van Damme film concentrates most of its efforts on decent action scenes (with Stan Bush songs!), viewers are going to get what they want for the most part.

‘Ip Man: The Final Fight’ is Without Question, a Disappointment