‘Blend-S’ Review: Bubblegum at Its Finest

Whether an anime superfan or casual viewer, everyone can attest to having certain series that they watch depending on their mood. Blend-S falls perfectly in line with what one might call a “feel-good anime,” one that comes packed with bright visuals, cute characters and plenty of laugh-out-loud moments. It lacks a strong central plot, but there’s no real need for one; it’s all about fun, silly situations coworkers-turned-friends find themselves in. Interestingly, Blend-S also doesn’t appeal to the crowd who watches anime specifically for the “plot” either–aside from shots of short swaying skirts and a few instances of jiggle, this definitely leans on the more mild side compared to other shows out there. Despite not catering to either of these demographics, Blend-S manages to get by on the strength of its writing and happy-go-lucky nature.

High school student Maika is obsessed with foreign cultures and, though she comes from a wealthy family, is determined to pay her own way abroad. However, every place she applies to refuses to hire her because of an uncontrollable evil glare that she randomly slips into without realizing it. While lamenting the fact that she might never find a job, Maika happens to runs into Dino, the handsome-yet-overzealous manager of a local café who instantly falls for Maika. As it turns out, her penetrating glare lends itself perfectly to a sadistic waitress character, and she’s brought aboard the Café Stile crew on the spot. 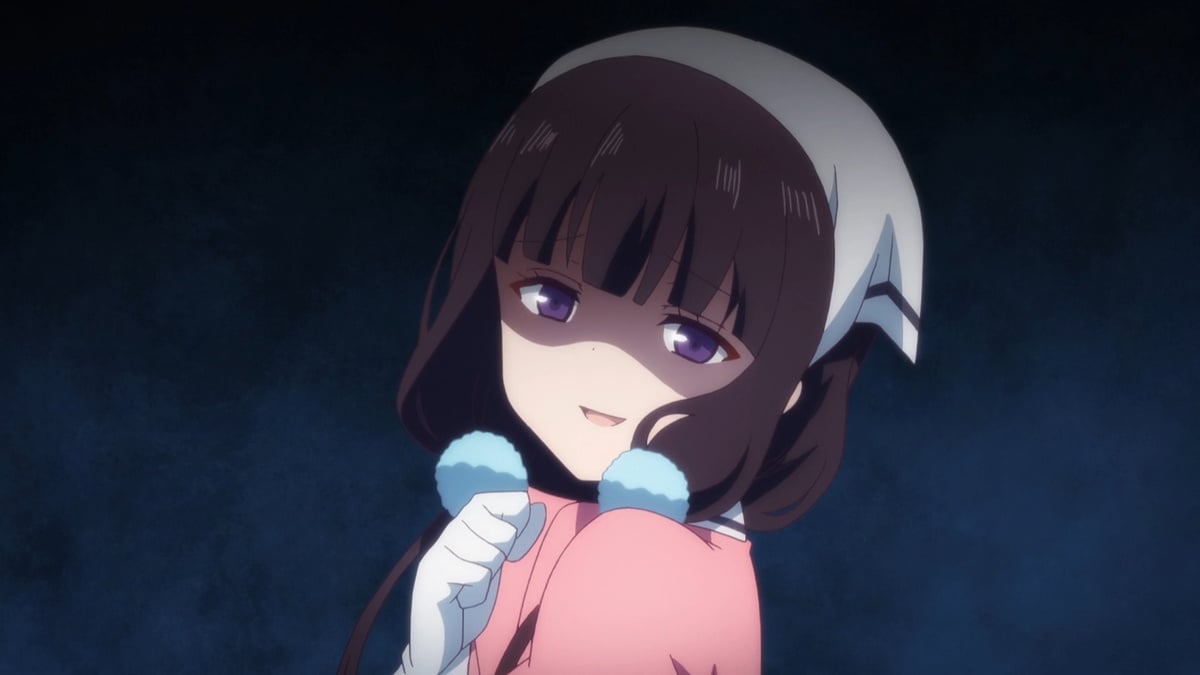 The one-sided romance between Dino and Maika is the only continuous story thread throughout the series, and the writers do a great job of making viewers root for both characters. Maika’s completely innocent and super kind personality both make her oblivious to Dino’s advances and serve as perfect contrasts to her horrifying glare. While it might seem strange for a man in his early-mid 20s to actively pursue a high schooler, Blend-S portrays it so naturally within the show’s world that it didn’t even cross my mind until my second viewing.

Of course, a good slice of life anime is nothing without a memorable supporting cast. The writers did a great job of making the characters appealing to what I’m assuming is the show’s demographic: teenage and young adult males. The blonde-haired and voluptuous Kaho is the only other high schooler working at Stile, and is perhaps the most relatable character due to her obsession with all things video games. This remains a trend throughout the show; deceptively young-looking Mafuyu is terribly addicted to kids anime and toys, socially-inept Koyo and Dino are both major otakus, and Miu is a perverted yet widely-renown doujin author. The interests of these characters all lend themselves to making Blend-S feel very topical, fresh and relatable.

Themed cafes centering around popular anime tropes is ripe for plenty of hilarious and painfully awkward interactions, and Café Stile provides that in spades. The show makes sure to highlight each of the staff’s tropes and how silly encounters with customers can be. From tender-hearted Maika feeling terrible about having to master verbal abuse to little Mafuyu kindly fending off customers she deems as having a loli fetish, the show’s unique setting is a constant source of entertainment. Unlike Working!! which is almost entirely centered around the restaurant, however, Blend-S often takes its characters outside of the workplace so viewers can learn more about their interests and home lives. As someone who sometimes desired more variety out of a show like Working!!, this was a definite positive (even if the cringeworthy-yet-standard beach and hot springs visits were included).

Blend-S gets a lot right with its likeable cast and novel setting, but there’s one addition later in the season that I just can’t wrap my head around: Hideri. It isn’t so much the fact that Hideri is a “trap,” but more so that his character design and personality are just so awful. The cat-like upper lip that he has whenever he talks is so unnecessarily over the top and uncomfortable to look at. Seeing him announced as “surprise” in the opening theme also never fails to induce a grimace. The worst part, though, is that Hideri is a total scumbag of a character. His sole mission is to become famous and popular by acting like a diva. He calls the patrons of Stile pigs and anime freaks, insists that regular clothes aren’t cute enough for him, and is the only waitress in Stile who doesn’t really play a trope separate from their personality. There are a couple moments when the show tries to humanize him and make the viewer care, but they don’t do nearly enough throughout the season to make Hideri anything more than a baffling addition to the cast. 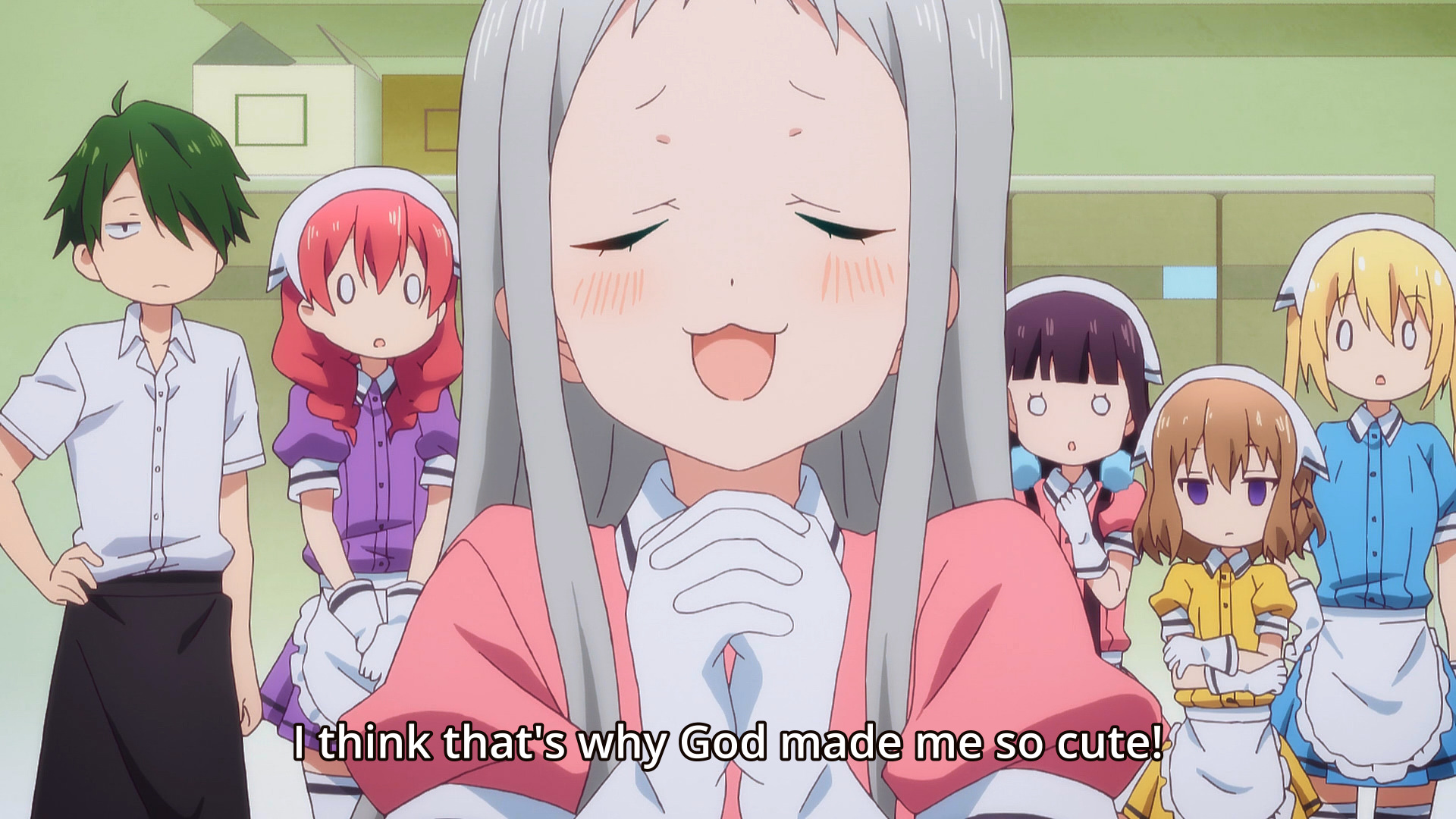 As it stands, Blend-S is a lighthearted, enjoyable slice of life anime that is guaranteed to make you crack a smile and fawn over its adorable character designs. The show does a great job of commenting on typical tropes in a completely self-aware manner. Not only does it capture the essence of being an awkward young adult, but it also manages to show that people from different walks of life can come together and still find ways to be good friends. It’s cute, it’s silly, and it’s an easy watch at just 12 episodes. If you’re looking for a palate cleanser or simply something to make you smile, I highly recommend checking this one out.

You can watch Blend-S on Crunchyroll here.