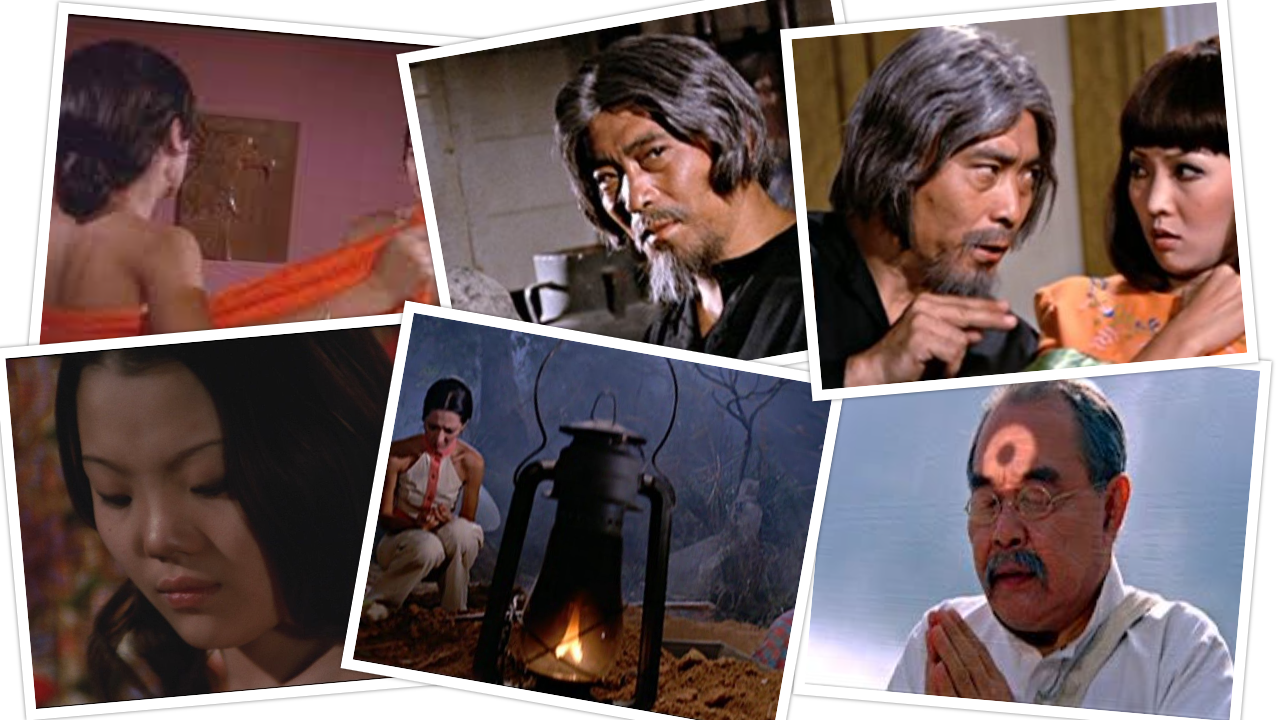 What would life be like if, rather than face problems head-on with courage, honour, and a sense of duty, people opted out of showing an inkling of gut and resorted to magical tricks to sway fate in their favour? For one, laziness would settle in rather quickly, but so would be a lack of acceptance towards fate and the differences that make everyone unique. Someone disagrees with a course of action? Put a spell on their mind. A date was stood up last night? Put a spell on their mind to have them fall in love. Someone at work is making life at the office a living nightmare? Cast a spell to kill them. Responsibility and respect would both get tossed to the wayside to the detriment of free will and the safety of others. None of the characters in Ho Meng Hua’s 1975 film, Black Magic, pay heed to such thoughts, putting spells on just about everybody they either loath or want to love.

Black Magic‘s opening sequence sets the tone nicely for the remainder of the picture, with a distraught woman paying black magic practitioner Shan Chien Mi (Ku Feng) a visit to kill her husband and the woman with whom he is currently having an affair. With his massive pot of boiling goop, some odd additional ingredients like breast milk squirted straight from the client’s tits; Shan goes about conjuring the evil spirits with hypnotic chants and the help of his voodoo-inspired dolls to inflict a painful, sweaty, naked death to the unsuspecting lovers. This is what Shan does for a living, charging large sums to bring people together or strike them down. High society princess Luo Yin (Tanny Tien Ni) is interested in the former, desperately wanting to get into Xu Nuo’s (Ti Lung) pants, but the latter is marrying the nice and proper Wang Chu Ying (Lily Li Li-Li), and as such refuses her advances. There is also the young, brash Liang Chia Chieh (Lo Lieh) trying to make a move on Luo, much to her dismay. Maybe black magic will solve everyone’s problems!

Black Magic is equal parts amusing, for all its unabashedly graphic and gratuitous nudity, violence and zaniness, and dumb. Dumb is not a word that merits a significant place in the world of film criticism. It is too facile, too all-encompassing, and, frankly, too easy a criticism to make. Despite the reticence, the word should be approached by critics; it is occasionally useful in describing a movie with its share of structural and thematic problems, particularly when those issues harm the film to the extent that it ends up being…really dumb.

Ho Meng Hua’s film is never boring; make no mistake about that. In fact, it is actually quite difficult to take one’s eyes and ears away from it, if mainly for how proudly immoral and profane it is. The aforementioned opening scene is a brilliant encapsulation of the ludicrousness the movie embrace with open arms. Can a woman be so jealous and irate about a husband’s infidelity that her only conclusion to fix the predicament is to have the targets of her scorn killed? Well, it turns out there is a fair amount of people in the world of Black Magic who think along those lines given how, first, Luo Yin asks the magician of the same spell to do away with Xu Nuo’s bride later in the picture and, second, Shan even says at one point that death spells are his specialty. Whether he is bluffing or not is beside the point. He is, after all, making a living off sorcery and performing no fewer than his third death spell in a matter of days.

This is probably where Black Magic earns some of its props. It is pretty gross at times, with several spells involving squishy worms and maggots, visibly painful deaths by brain crushing headaches, and other less gag-inducing but no less strange images, such as the love spell doll created for Luo to seduce Xu, complete with its unmissable huge, dangling penis. Naturally, the film cuts back to the doll and its penis again and again and again on the night Luo performs her end of the spell to lure Xu into her arms. Director Meng Hua is evidently no prude and has the movie jog along without any specific rules other than that anything is permissible concerning unorthodox imagery. Adding to the surreal effect is the overall set and costume design, steeped in cheesy 1970s aesthetic. It was a decade that many today scoff at precisely for the way people dressed and how homes were decorated, and even though it feels correct to accept and respect such tastes as products of their time, one cannot help but feel that a whole lot about Black Magic looks absolutely ridiculous.

Curiously enough, despite that Black Magic has its charms (albeit filthy, disgusting charms), it lacks some cohesiveness for all the parts to come together and make a proper film. For one, it ultimately never says anything about the dark side to one’s obsessiveness over another person. Infatuation, misplaced love, heartache after being rejected, each is a perfectly reasonable theme to explore in a movie where characters are literally forcing others to fall in love with them via magical spells, yet it is clear by the overdone and poorly rendered climax that Black Magic is totally uninterested in any them. Instead of confronting any of those ideas, the script throws in a noble magician (Goo Man-Chung)  to duel with Shan once things get out of hand. Who needs to learn a valuable lesson about love when rival magicians can duke it out with a light show? Another strange aspect of the film is how it lacks a strong lead character. There never is the sense that anyone from Luo Yin, Xu Nuo, Shan Chiah Chieh, or Liang Chiah Chieh is supposed to be the viewer’s eyes and ears. A character is followed for a few scenes and then disappears for a period, only to return later to perform another act of malice, jealousy, or selfishness.

Ultimately, Black Magic disappoints in that regard. The concept around which the story is built is solid, and there are more than enough scenes that will have viewers laughing or feeling squeamish, but it never amounts to anything. It has no ideas to share and never makes any of its characters feel important or layered. Spells are cast, predictable jealousies are aroused, some jokes are shared, two magicians fight to the death, and the film ends. Although somewhat amusing, the film only earns a tepid recommendation.