There are shows you can watch while engaged in other activities. Better Call Saul is not one of them. This is a show that really asks you to pay attention. If you don’t you can get easily bored. Ostensibly a prequel to Breaking Bad, it has functioned as a very different kind of show. It may be in love with the same sense of methodical process, but it avoids any of the big, badass moments that made the father series iconic. It rewards careful attention, making use of its leisurely pace to fully immerse the viewer into the moral decay of its central character. The result will be potentially heartbreaking, possibly more so than Walter White (Bryan Cranston) himself turning into a ruthless drug baron.

Season four continues the relaxed, composed tone that has characterised the series. We start, as has become a trademark of the show, with a monochrome look at Jimmy McGill (Bob Odenkirk) in his life post-Saul Goodman. And it is not all good; having just collapsed from a stroke, Jimmy’s fake license nearly catches him out in the hospital, all before he convinces himself that his taxi driver —with an Albuquerque Isotopes air freshener hanging from his rearview mirror — knows who he really is. Although it looks like he is getting away this time, the message of the scene is clear: Jimmy will never be the same man again.

The show is slow but the wheels keep turning, and the timeline between the end of Better Call Saul and the start of Breaking Bad is coming closer and closer into focus.

From here, the title credits play and we are taken back to the series’ present. It may have been a year since we witnessed Chuck (Michael McKean) kill himself by setting fire to his own house, but episode one of season four starts nearly exactly where we left off. In a moment of harsh dramatic irony, Jimmy wakes up next to Kim (Rhea Seehorn) in their apartment together, puts the coffee on and looks through the job listings. This is characteristic of the show as a whole, and will probably be a good hint as to its strategy this season; we know that something terrible has happened, but before we even get the reaction, we observe Jimmy in a happy, productive mood. It’s cruel but necessary, perhaps allowing Jimmy his last moments of honest-to-goodness action. Once the news of Chuck’s death breaks, its safe to say he will forever be a changed man.

The rest of Jimmy’s storyline this episode twists the knife in further, with Chuck’s partner Howard Hamlin (Patrick Fabian) calling him up to double-check his obituary. Even in death, Chuck finds a way to rankle Jimmy, his innumerable achievements — graduating school at fourteen(!), establishing the best law firm in New Mexico — a reminder of his superiority. Odenkirk does some of his best work here, the look of distaste on his face speaking volumes about how he views his deceased brother. He barely talks for the rest of the episode, engaging in silent drinking sessions with Kim, eventually falling asleep with a bottle of tequila by his side… Does he seem genuinely sad?

One of Better Call Saul’s greatest strengths, however, is that we know exactly what is going to happen to Jimmy, as well as exactly what is going to happen to Mike (Jonathan Banks), Gus (Giancarlo Esposito) and Hector (Mark Margolis). Its from how the two series connect that Better Call Saul becomes intriguing, using every part of its seedy Albuquerque milieu to construct an intimate yet epic morality tale about people being drawn to the dark side despite their better nature.

For this reason, there is something intensely satisfying yet sad watching Mike hang up his career as a car park attendant — honest work, if boring — and infiltrate Madrigal Electromotive as their new security consultant. In a scene typical of Better Call Saul’s angular plotting, we are introduced, without warning, to a man we have never seen before getting into his car (not before, of course, helping his son with his bike) only to find that it can’t get started and his security pass is gone. The next sequence illustrates the unique pleasures of the show; seeing how plots are put together through scenes that initially appear inconsequential. His way of pointing out problems is by exposing them, managing to walk around a huge warehouse despite not being an employee, something he cleverly uses to get an interview with Breaking Bad-favourite and Madrigal executive Lydia Rodarte-Quayle (Laura Fraser). How this links up with Gus Fring’s multimillion-dollar business, Jimmy’s shady law firm and an exposed Nacho (Michael Mando) remains to be seen. The pleasure of season four will lie in how all this is slowly put together. 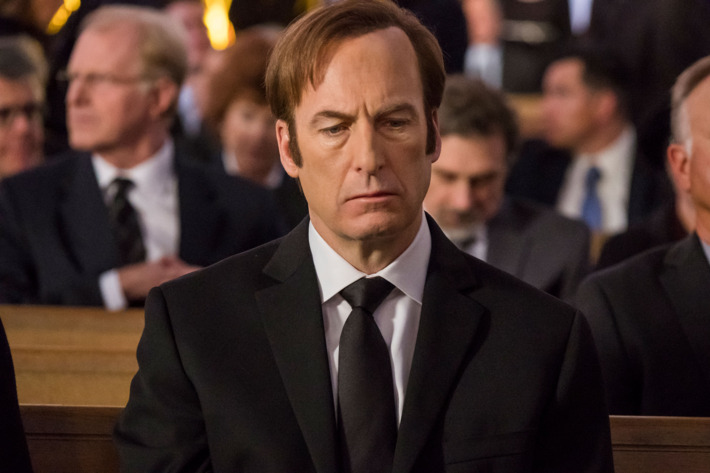 The show is slow but the wheels keep turning, and the timeline between the end of Better Call Saul and the start of Breaking Bad is coming closer and closer into focus. In a show densely layered with foreshadowing, this final transformation is best hinted at after Chuck’s funeral (which tellingly, we do not see) when Hamlin sits down with Jimmy and expresses his remorse for what happened to his brother. After a suicide, its natural to feel guilty for one’s actions, however insignificant they may be, and here we finally see a side to Hamlin hitherto missing; a man who truly cares and wishes that he could’ve done something different, especially with how he handled the insurance fiasco that saw out last season.

Instead of comfort, however, Jimmy offers a message of brutality, telling Hamlin that it is now his “cross to bear”. Then he gets off the couch and offers to make coffee. It seems at this moment, with Jimmy carefreely whistling, as if a great burden has come off his shoulders, and the real Saul Goodman has been born. (Is it because he no longer feels guilty, or is it because he knows that now no one will blame him?) Many of us felt the same at the end of series one when he drove off humming “Smoke On The Water”, the desire for a truly righteous life vanquished. Jimmy has had moments since then to redeem himself; but with Chuck now gone, the gloves are now truly off. Let’s just hope Kim gets out before its too late.

Sharp Objects and the Representation of Memory