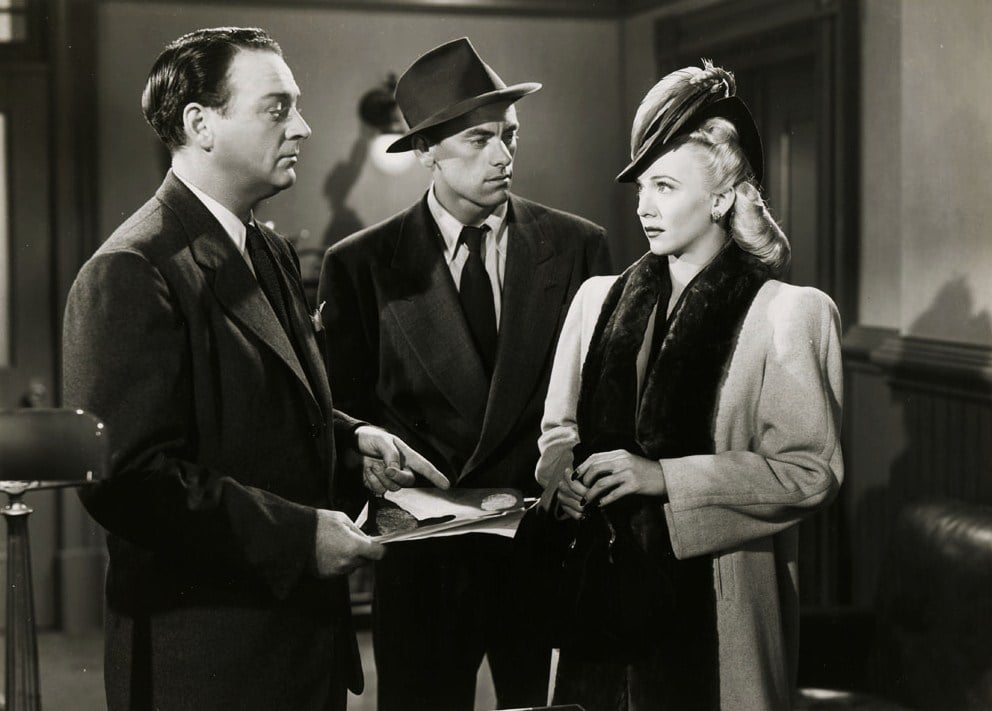 On what began as an ordinary night at the police station, Lt. Sam Carson (William Gargan) is notified of a vehicle parked on the sidewalk just in front of the building. Within the vehicle is the body of the late Walter Bard (Bernard Nedell), a private detective recently engaged in some rather politically relevant cases. Among the suspects possibly involved in man’s timely demise are Janet Bradley (Carole Landis), a prominent socialite who had an appointment with Walter earlier that evening, as well as Nora Bard (Mary Anderson), Walter’s soon to be divorced wife. Little does Lt. Carson know that operating behind the scenes is medical examiner Dr. Yager (Don Deddoe), working at the behest of newspaper magnate Max Calvert (Rory Roberts), working his angle and would like nothing more than to own the biggest story of the year: the conviction of Janet Bradley! The truth of the matter is far murkier than anyone can guess off the bat. It’s going to be a long night.

The funny thing about watching older films is how the credits fade slowly in and out during the opening minutes when swelling music plays. The final credit, as is always the case, is awarded to the picture’s director. In the case of Behind Green Lights, the first fraction of a second proves misleading when viewers start to make out the given name Otto as it slowly fades in. The first immediate auteur that comes to mind for anybody knowledgeable of old-school Hollywood is Otto Preminger. The excitement of that instant is swatted away when the surname Brower clears up. Like so many of his colleagues of the era, Brower was astonishingly proficient at churning out movies on a near-yearly basis from 1929 to 1946. Speed of efficiency notwithstanding, Brower is no Preminger, as evidenced by Behind Green Lights, a decent lark with moments of hilarity, yet ultimately a forgettable attempt at screwball comedy drenched in murder and mystery.

What stands out at the midway point of the movie is how it takes a few pages out of the Arsenic and Old Lace playbook, which came out two years prior courtesy of filmmaking maestro Frank Capra. At one stage, there are so many individuals that have a stake in who killed Walter Bard that when his cadaver circuitously winds up inside the coat closet of the newspaper men’s office at the police station, young gun journalist Johnny Williams (Richard Crane), sensing a big scoop, spits out his best sales pitches to prevent anybody from opening the closet door and discovering the body. In fairness, the scene is quite funny, aided in no small part by an extremely game and energetic performance by Crane. On the flip side, it still feels as though the movie is searching for an identity. There are no other scenes like it in the entire film. Sure, there are other moments that strive for laughs, some of which do, in fact, land, yet Behind Green Lights comes across as bereft of a clear-cut voice.

The film is sort of a slapstick comedy, sort of a dialogue-driven farce, sort of a drama, sort of a mystery…it is sort of a lot of things at once, not all of the original, as evidenced by the previously cited closet room scene. What’s more, not all of the actors look as though they know which type of film they are playing in either. William Cargan is austere and dry for the most part, whereas Don Deddoe, with whom he shares many scenes, would fit in comfortably in a vaudevillian comedy. Some of the pieces don’t gel very smoothly. In fact, sometimes, the movie is fighting against itself from one scene to the next, given the stark tonal shifts. Interestingly enough, the most obvious example comes in the final minutes once the mystery is resolved and Janet, spoiler warning, is cleared of suspicion. One of Lt. Carson’s colleagues speak to him about maybe asking Mrs. Bardley out for a date. Was there supposed to be chemistry between the two in the earlier scenes? Carson was riding her pretty hard at times under questioning and, in between interrogations, expressed no interest in her at all, whether to himself or any of his fellow officers. It comes out of left field, like so many of the film’s disparate moments.

It isn’t fair, however, to beat up the film too much. There is indeed some worthy hysteria, said moments owing a lot to clever dialogue from the mind of Charles G. Booth and certain cast members blessed with solid comedic timing. For what it’s worth, the film offers a decent mystery, as both Janet Bradley and Nora Bard look to have excellent reasons for liquidating Walter Bard. The person pulling strings behind everyone’s back has their reasons, although it isn’t the most inspired explanation.

Behind Green Lights is a case of a film for which the parts are individually superior to their sum. It has a lot of good actors that are putting in solid work, it has a handful of hilarious moments, and the mystery itself is just good enough to keep the viewer guessing. As a whole, however, it strikes one as somewhat discombobulated, committing bizarre tonal shifts that set the film off in different directions for reasons that are not entirely clear. It’s passably entertaining and won’t make anyone wish they had spent their time doing something else, yet as far as comedy, mystery, and noir go, there is better out there.

Nightmare Alley is a Dark, Pessimistic Descent Into Compulsion And Greed

Johnny O’Clock is both an encouraging and disappointing experience