Attack on Titan is currently airing what may be it’s finest string of episodes yet, and if the remainder of season three continues this trajectory, then we’d best look out for the five episodes remaining.

Following on the heels of Erwin and Armin’s valiant sacrifices in “Hero”, we’ve had a host of new developments but the most massive of these has to be the Lost-like twist that Grisha Jaeger comes from a far advanced city where humanity seems to be at least 50-100 years ahead, technologically-speaking, of the walled cities we’ve come to know.

Yes, the long foretold basement has been accessed at last, and the secrets it holds are as bewildering as they are appetizing. Though we’ve only received the barest snippets of information about these long held secrets, the tantalizing prospects of what next week will offer are more than enough to excite the imaginations of this writer.

The moments leading up to the discovery of the basement are fraught with the tension of how much we’ll see before the episode ends.

Still, there’s so much more to discuss than just the opening of the basement at long last. As Levi gave chase after the beast titan, he came upon Armin and Eren, and while the scout titan was able to escape with the beast titan’s owner and Reiner, Bertholdt was not so lucky. As Levi was presented with Erwin and Armin, both on the cusp of death, he was also presented with the decision of who to use Chekhov’s syringe on.

Ultimately, he decided on Armin, and as Bertholdt came to, it was only to be screamingly devoured by Armin’s newborn titan form. Let me tell ya, seeing Bertholdt go down at last, and seeing him go screaming to his former friends for help, as said friends look on totally impassive, well this was about on par with watching Joffrey or Ramsay breathe their lasts on Game of Thrones.

Good riddance to bad titans is what I say, and I really hope Bertholdt felt those first few bites before he went down the old hatch. Of course, this leaves us with a lot to unpack yet, as Levi’s decision was heavily influenced by the fact that he wanted to let Erwin rest at last. And if Erwin had to die, it may as well have been in service of the mission, and in the place he most wanted to go before he died, here, in Shinganshina. 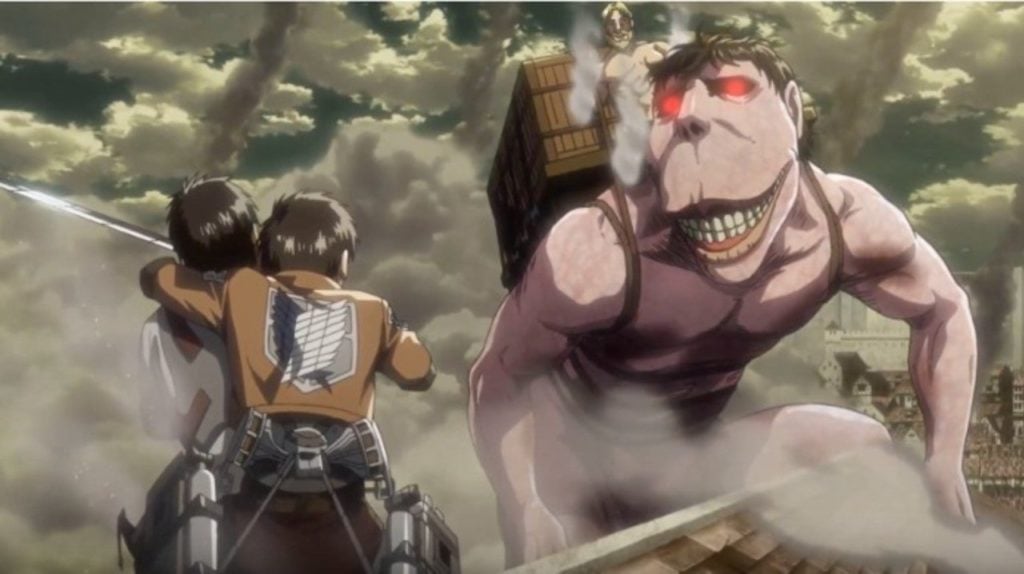 Though we know little about the scout titan, his importance cannot be understated when you consider that he saved both Reiner and the beast titan’s owner from certain death.

This crucial decision by Levi is also something we can’t discuss without getting into what it means for that flash forward we’d been waiting for. I mean, who would have thought that the intense stand-off with Levi would be over whether to save Armin or Erwin? Though Mikasa and Eren both demonstrated their loyalty to their fallen friend, the decision was ultimately up to Levi, and biased though he was, he backed their play.

Now, with several trusted characters (Pyxis, Armin, Levi, Eren, Historia and Hange) holding the reins of power in Attack on Titan, where will this series go with the newly unveiled information that they now hold? Further, how will another powerful titan being added to the ranks of humanity favor the battles which must surely come with Reiner and the mysterious bespectacled leader of the titan faction?

Here’s hoping those two get more than brutal maimings and injuries the next time the survey corps encounters them, but with the survey corps of Attack on Titan boiling down to a meager nine surviving soldiers, the walled cities are going to have to do some serious recruiting before they’re able to challenge the power beyond the walls again.

I gotta say, watching Bertholdt’s head get crunched like a watermelon in a Gallagher bit gave me a lot of satisfaction.

Still, this thoroughly resounding victory for humanity, hard won as it was, offers an endless fount of new hope for our protagonists. Now, with so much more to be revealed next week, we stand at the cusp of the most major turning point of this entire series. What surprises does Attack on Titan have left to reveal in the remainder of season three? While our imaginations are running wild, you can expect us back from beyond the walls in a few weeks to break it down.