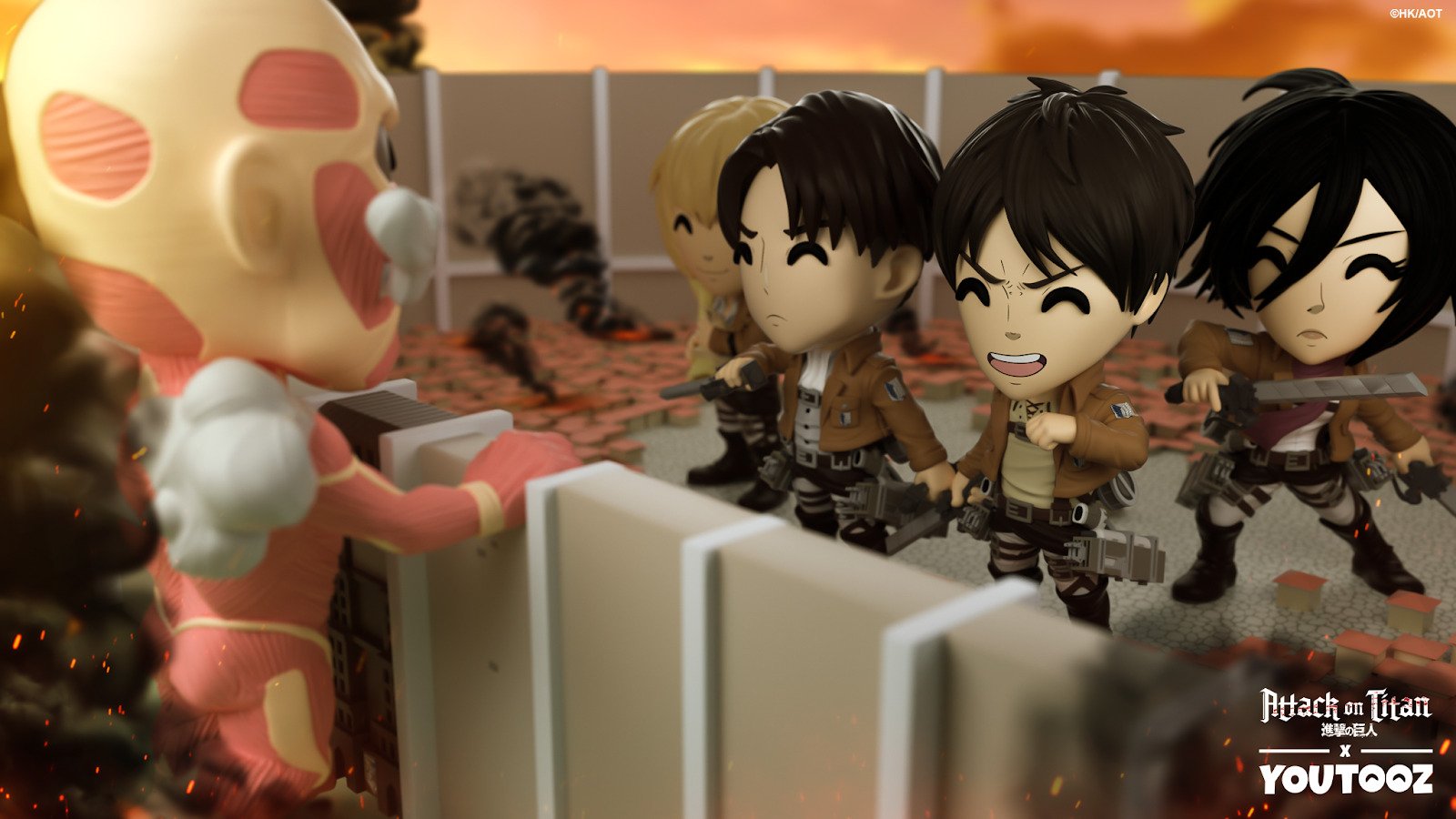 Youtooz vinyl figures only continue to grow in both popularity and their hobby of collecting franchises. Their next set of collectable figures comes from one of the most popular anime’s of the last eight years or so since it began way back in 2013. Since the anime first started, (based on the manga series that began in 2009), it has skyrocketed to popularity: the global phenomenon that is Attack on Titan.

Since the anime became such a success, it has continued to maintain a pretty massive level of attention. In the last few years alone, there have been several Attack on Titan video games, a section of the Universal Studios theme park in Japan dedicated to  the series and even a live action movie (we don’t talk about the live action movie though).  Youtooz are now bringing the infamous characters of the series- such as Eren Jaeger, Mikasa Ackerman and those creepy as hell Titans- to the fore in vinyl figure form.  The characters available will be Eren, Mikasa, Levi, Armin and the Colossal Titan and you can check them out on the Youtooz website at the links below along with the official press release for the figures. Each figure ships in a matte, embossed, protective outer sleeve inside a shipping carton sealed with Youtooz tape and will be available for $29.99.

“We have had the pleasure of working with the Funimation team over the past year to bridge into anime and are excited to continue our partnership with this Attack on Titan collection,” said Austin Long, co-founder, Youtooz. “The series is incredible for its storytelling and characters which we’re proud to bring to life through the collaboration.”

Based on one of the best-selling manga series of all time, the award-winning Attack on Titan anime is both a critical and commercial success gaining accolades from fans and critics alike.

The main protagonist Eren Yeager stands at 4.5 inches tall, wearing the standard scout regiment uniform. Eren wears a caramel brown jacket over a beige shirt with string tassels near the collar. The jacket includes the Scout Regiment logo. The pants are white and tucked inside knee-high black boots. To be mobile in combat, Eren has harnesses on his legs, chest and waist. Sculpted carrying a sword in his right hand he is strong-willed and passionate. Eren’s sleeve is beautifully illustrated to show fire and a Colossal Titan. His double-walled window box includes drawings of the ruins of Shiganshina Districts. The interior shows fire debris and the Attack on Titan logo.

Mikasa Ackerman stands at 4.6 inches tall. She wears a brown jacket over a white blouse and dark brown scarf. Her shoulders and left pocket of her jacket include the Scout Regiment logo. Mikasa is sculpted with a sword on each hand. Her expression is calm, while her double-walled window box includes drawings of houses from the Shiganshina District.

Levi Ackerman stands at 4.6 inches tall, wearing the standard Scout Regiment uniform. Levi is wearing a brown jacket over a white button-up shirt, along with a white ascot. His pants are white and are tucked inside his knee-high black boots. Levi is sporting an undercut hairstyle. Levi’s sleeve is beautifully illustrated to show fire and a Colossal Titan. His double-walled window box includes drawings of Levi, face-to-face with a Titan. The interior of his packaging shows fire debris and the Attack on Titan logo.

Armin Arlert stands at 4.6 inches tall wearing the standard Scout Regiment uniform. He wears a brown jacket over a white polo shirt. His pants are white and tucked inside his knee-high boots. His double-walled window box includes illustrations of Armin and Eren reading a book.

Standing at 5 inches tall, Colossal is the most notable Titan. The muscles are carefully sculpted and red, with bones visible. This collectible is a conversation started in any living room. The double-walled window box includes drawings of fire, chaos and the Attack on Titan logo.

The Attack on Titan collection features five limited edition vinyl figures: Levi, Armin, Eren, Mikasa, and Colossal Titan, all of which will be available direct-to-consumer online at Youtooz.com and in select speciality stores such as FYE. These figures were developed as a part of a joint effort between Youtooz and Funimation.

Youtooz is the fastest growing direct-to-consumer toy business today and has one of the fastest turnaround times in the consumer products category, poised to capture moments from content in real-time for fans to enjoy. To learn more about Youtooz and explore the joy of the internet, visit www.youtooz.com.

Youtooz turns the joy of internet culture into amazing products that people love. A consumer product company, Youtooz captures the best moments of the internet and brings them to life through high-quality, unique product drops. The company seeks inspiration from its community and content creators across the internet, and works together, along with its IP and License partners, to create collectibles, plushies and other products that bring joy to everyone. Since its launch in 2019, Youtooz has released more than 300 unique figures and believes that together, we can create joy in anything. To learn more, visit www.youtooz.com, and check us out on social on our Twitter and Instagram.