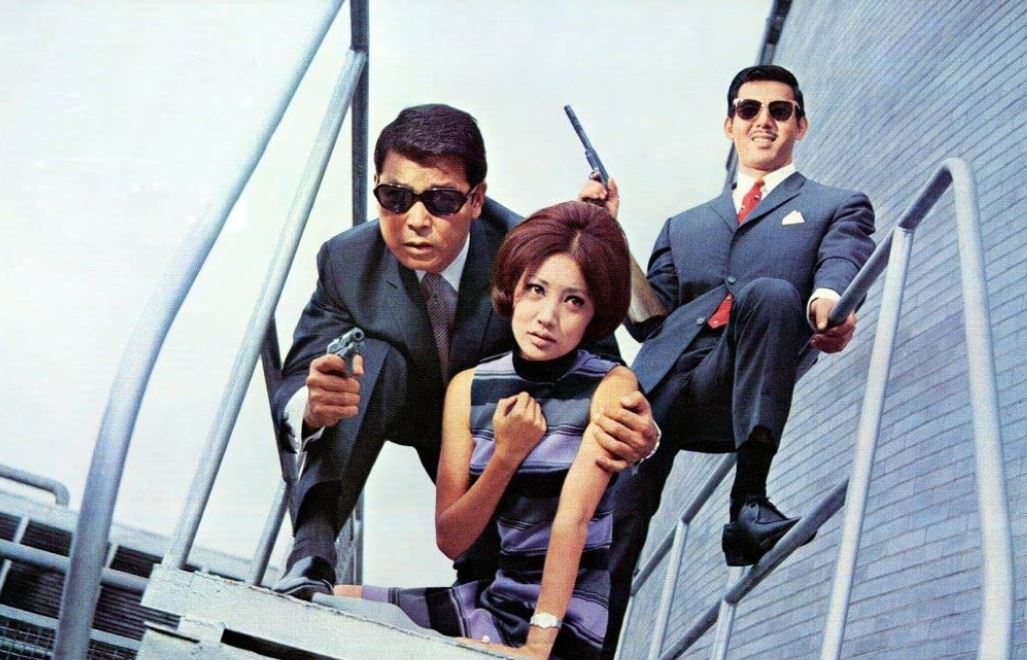 Historically, not many non-Chinese directors had the privilege of working within the Shaw Brothers studio system. Unlike with major American studios, where American, British, Canadian and directors from elsewhere in the world can try to make a splash, Shaw Brothers was very much a Chinese endeavour. Like all rules, however, there are exceptions. The director behind one of the studio’s most iconic films, King Boxer, was in fact Korean. A Japanese director been awarded the chance to put their stamp onto the Shaw legacy is even more unique given the historically volatile relationships between the two countries concerned. Matsuo Akinori is one of the few to have done so, with his 1967 spy imitator film, Asia-Pol.

Jimmy Wang plays Ming Yang, a young operative for the highly secretive Asia-Pol, a pan-Asian secret service style organization. The agents work under deep cover, hopping from one nation to the next in order to foil smuggling plots and worse. Agent Yang is posted in Japan and has been for some time, which has allowed him to form a flirtatious bond with the agency’s Japanese secretary, Sachiko (Ruriko Asaoka). Many years ago he was separated from his parents under mysterious circumstances that haunt him till this very day. His mother has passed away, that much he knows, and it would appear that a recently murdered top-level Chinese gangster may have been his long lost father, although evidence is currently inconclusive. Through a string of iffy plot points, Yang manages to leave Japan and head for Hong Kong, not only to unravel an illegal gold smuggling operation planned out by a well known internationally stretched mob but also to find out the truth about his family’s past. It is not long before Yang meets up, under some very lethal circumstances, with one Ming Hua (Fang Ying), a lowly operative for the mob Yang is after. As clues pile up regarding both the mob and his family history, Yang is convinced that Ming Hua may in fact be his sister. The danger and surprises pile up the deeper the investigation goes…

Asia-Pol is a tremendously interesting entry in the massive Shaw catalogue, not necessarily because it succeeds on all fronts, but more because of what it attempts to pull off. One could argue that any warm reception for the film may rest on the old philosophy of it meriting an ‘A for effort.’ Viewers with some knowledge of cinema history can put two and two together to quickly understand what sort of project director Akinori set out to deliver. The movie is essentially a Chinese-Japanese interpretation of the spy movie craze that hit the world by storm in the 1960s after the stupendous releases of the early James Bond films. Yang is a handsome, confident, young yet sufficiently seasoned secret agent employed by a highly sophisticated agency, who, with the help of some clever allies, an absolutely gorgeous secretary, and a few inventively devised and hidden gadgets, tracks down international criminals. If the reader has seen at least one 007 adventure, all of the aforementioned qualities should ring a bell. It becomes difficult to fault the picture for being nothing more than an imitation of the Bond franchise given that, in truth, a countless number of pictures aimed for the same lofty goal, to touch some of that 007 magic. Asia-Pol is merely going ahead with what so many competitors at the same strove for. What can be safely argued is that at least Matsuo Akinori gives the movie enough panache and flair to leave viewers satisfied. The adventure has at least a few moments where neat computer wizardry pops up unexpectedly, some death-defying close calls in which Yang was but a hair away from meeting his doom, and a couple of excellently staged set-pieces. An imitation, yes, but a competent one, which should count for something. Asia-Pol also receives a boost from the score, which fits right in the sort of über cool attitudes all these movies were trying to sport. The main theme is even quite catchy, easily sticking in one head. Maybe the fact that it is played repetitiously a million times explains that. The fact is, it sounds neat.

An element to the story which does have it differ from many other Chinese pictures is how it presents the Japanese mostly in kind light. In hundreds upon hundreds of movies from Chinese studios, the Japanese are considered the forces of pure evil. The historical wrongs committed by the latter certainly go a great length in explaining why that might be, but as agent Yang himself argues when confronted by the film’s chief antagonist, George (Jo Shishido), not all Japanese are bad people. Therefore, seeing them depicted as normal folk who can be helpful and with whom a Chinese person can even fall in love gave the adventure a breath of fresh air. Of course, the fact that the director is Japanese plays a part in this more favourable than usual presentation, yet lest one forget this is a Shaw Brothers picture first and foremost, a studio which itself has depicted the Japanese as vile, inhumane creatures on more than one occasion. Putting an extra little spin on the plot, the mob leader George is half Japanese, half Chinese, whose aim is to obliterate the strong Japanese economy by infiltrating it with foreign gold. The objective itself is tenuous at best, ill-conceived at worst, yet his reasons for doing so are just as personal as Yang’s Hong Kong investigations: his own Japanese father left the family when he was but a lad. It works like a cheap joke about how so many films portray Japan as evil. Here is one Chinese character engaged in something ludicrous against the land of the rising sun for reasons that selfishly concern only him.

Speaking of Japanese characters, Asia-Pol has its own Moneypenny in Sachiko, played sharply by Ruriko Asaoka. In addition to being drop-dead gorgeous, Sachiko goes on her own personal journey in trying to woo Yang into her arms despite the misgivings about colleagues getting intimate with one another. She is resourceful, strong-willed and has a decent sense of humour to boot. Just about any scene which includes her automatically receives a breath of life. The same can be said for Jo Shishido, who is a formidable mobster enemy with grand ambitions, ones that see the liquidation of close allies if it means for profit for him. Wong Hap is quite fun as he plays an Asia-Pol mole operating within George’s mob organization, never revealing his true identity to agent Yang, thus preserving a sense of mystery about his character. In fact, most of the actors in the film are more than competent, save Jimmy Wang himself. This was his first big-screen role and at times it seems as though the pressure on his all too slim shoulders is too great. He would go on to do some pretty solid stuff, his most well-known role being the One-Armed Swordsman, yet here there are far too many scenes in which perceptive viewers can tell that he ‘is acting’ rather than just being his character and conveying the necessary emotions in a more naturalistic fashion. It is even a bit painful to watch in some instances.

The more Shaw films one watches, the more difficult it is to find the truly great ones. Even those which aim a little more to the left or to the right, such as by taking the films out of historical, feudal China, do not necessarily earn all their stripes. Asia-Pol falls into the ‘good’ category. It never wows as one would hope, and is in fact extremely derivative of another tremendously famous spy movie franchise. Nevertheless, it features some spunky performances, a very cool score, and a couple of neatly performed action set-pieces. Kung fu fans may be left out in the cold with this one, but spy buffs might be quite at home with it.

‘The Boxer from Shantung’ Does Not Aim High Enough