Superhero films are forever shuffling between two polar opposites. At one end of the spectrum is the dark, brooding savior, where at best you get The Dark Knight, and at worst, Batman v Superman: Dawn of Justice. The other polar extreme is populated with films heavy on adventure and comedy, and light on stakes. The first Ant-Man was perhaps the best encapsulation of this type of comic film. It benefited from a strong cast led by Paul Rudd, one of the best comic actors of his generation, and its thrills were strictly modest, with only tenuous connections to the larger Marvel universe. Its sequel, Ant-Man and the Wasp, also fits squarely in this lighter category, although it’s a more assured and cohesive vehicle, free of the conflict that marred the original film’s production. It’s not something that most viewers will remember years down the line, but there’s also not a dull or useless moment.

If it feels like it’s been a while since we’ve seen Ant-Man — despite the onslaught of Marvel films — that’s because it has been a while (at least on the MCU timeline, which has averaged three films a year recently). Two years have passed since the events of Captain America: Civil War, in which Scott Lang (Rudd) fought alongside the Captain. That stab of conscience landed him on home arrest, with the threat of a 20-year sentence should he return to his superhero ways. Lang spends his days finding ever more elaborate ways to amuse his daughter while also trying to run his new security company with Luis (Michael Peña) in absentia.

Original Ant-Man Hank Pym (Michael Douglas) and his daughter, Hope (Evangeline Lilly), won’t even talk to him after his Civil War escapades. That quickly changes, however, when Hope becomes convinced that there might be a way to save her long-lost mother (Michelle Pfeiffer), who has been trapped for decades in the Quantum Realm, shrunken down to a subatomic size. Lang briefly ventured down to that miniature kingdom in the first film, and may have gleaned some knowledge of her whereabouts. Of course, not everyone wants to see them find her, including a mysterious suited stranger who can seemingly walk through walls (Hannah John-Kamen). 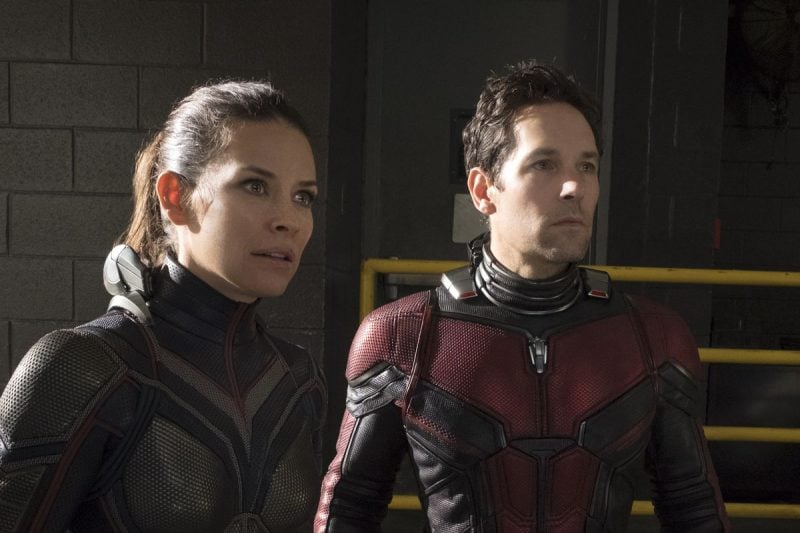 Much of the first Ant-Man was animated by Lang’s love for his daughter and his desire to create a safer world for her. Ant-Man and the Wasp transfers that familial affection to Hope and her search for her absent mother. It would be totally normal to expect the film to mostly focus on Ant-Man, but Lilly’s Wasp is equally — if not moreso — important as Rudd’s character. It’s Lilly’s emotional journey, and Rudd is mostly there for comedic relief. Marvel films haven’t always had particularly great roles for women (see Pepper Potts), but recent entries have given them something closer to parity with their male costars. Ant-Man and the Wasp is the first Marvel sequel to so radically flip the script and alter its focus.

Almost everything in Ant-Man and the Wasp is breezy and delightful, but it may be so breezy that it just floats away and right out of one’s memory.

It’s a nice change. Lilly was one of the more interesting actors on Lost, but her career never really went anywhere until being revived in the Hobbit films and the first Ant-Man. She lacks the comedic skills that make Rudd so charming, but her steely determination suits the character well, and her chemistry with Rudd is spot on. Even though she spends a good chunk of the film wanting to bash his head in, the two are able to keep up a particularly effortless banter.

The first Ant-Man was famously taken away from its original screenwriter and director, Baby Driver’s Edgar Wright, and the resulting film seemed disjointed at times, with a number of jokes that simply didn’t land. It’s hard to tell if that was the result of Wright’s departure, or just a failure of his replacement, Peyton Reed, but the film was scattershot and wobbly, despite some fine performances. Ant-Man and the Wasp comes off as far more assured. Perhaps Reed and his bevy of screenwriters have finally gotten the hang of things, or maybe it just helps to be involved with planning out a film from the earliest stages. The jokes come faster and with a greater success rate, partially thanks to Rudd’s stronger delivery. There were moments in the original where he seemed ambivalent about how much humor Lang should display, but he has wisely chosen to go all in for the sequel.

Ant-Man and the Wasp also seems to have developed a visual style that sometimes eluded its predecessor. Reed is a great director of actors, and he can coax a nice screwball patter out of them, but some of his tableaus could be uninspired and pedestrian. This time he’s found a way to keep his camera moving and fluid, all while punching up the visual comedy. There’s an inspired chase scene through the hilly streets of San Francisco that owes a great debt to Peter Bogdanovich’s What’s Up, Doc?, though Rudd has taken Barbra Streisand’s role, and Lilly is the more straight-laced Ryan O’Neal. 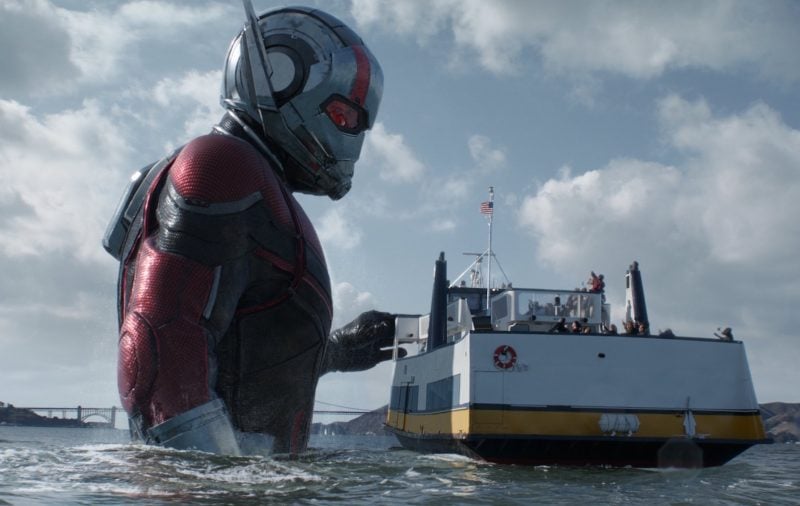 Almost everything in Ant-Man and the Wasp is breezy and delightful, but it may be so breezy that it just floats away, right out of one’s memory. The impact of Infinity War barely registers, and it’s not clear if any part of what happens here will be of significance in the resolution to the Avengers’ story. That’s not to say that Ant-Man needs to address weighty issues in his films, but the lack of real acknowledgment threatens to turn this into a trifle among its fellow superhero films. The great fault with many comic films is that they focus on villains and conflicts that are far too epic to do justice to. Ant-Man’s problem is that his villains and conflicts are far too insignificant for anyone to care about.

Yet even with its small stature, Ant-Man and the Wasp is thoroughly charming and enjoyable. It does what it sets out to do and does it admirably, even if it sets its sights a bit too low. It probably won’t be anyone’s favorite superhero film, or even their favorite Marvel film, but it’s certainly one of the most fun.