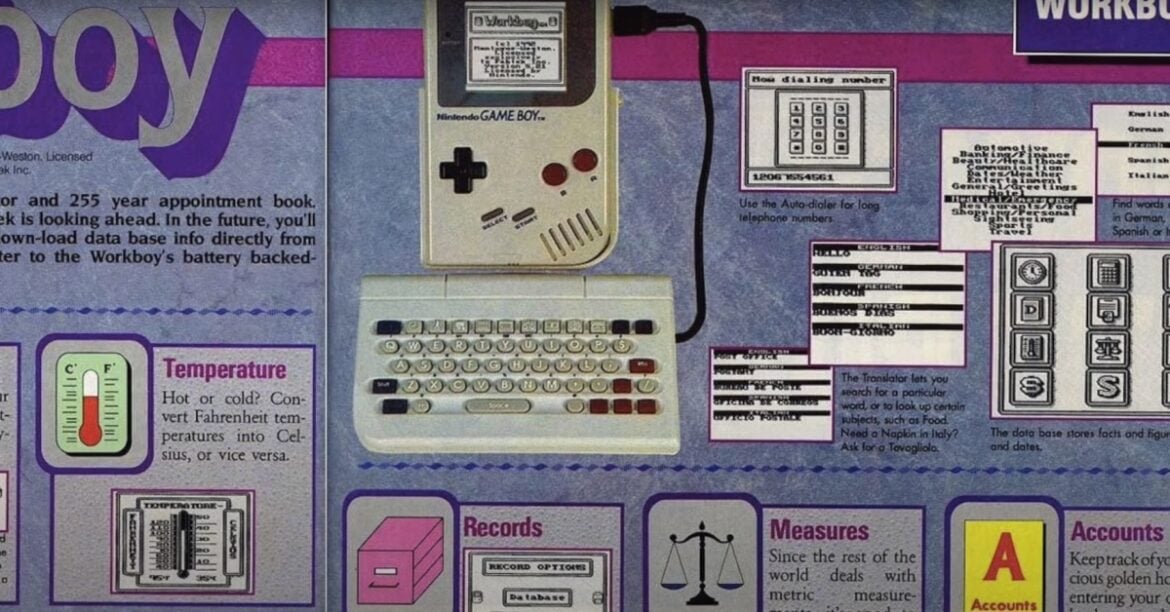 The Game Boy was a portable gaming machine, but at one point, it almost became something more. Nintendo worked with a company called Source Research and Development to design an accessory known as the WorkBoy that, with production assistance from Fabtek Inc., would have given the handheld wonder the ability to function much like a PDA.

As covered in a new DidYouKnowGaming? video and reported on IGN, the WorkBoy accessory included a stand to prop up the Game Boy unit, as well as a keyboard that plugged into the link cable slot. Add in a cartridge for the software and you basically had a limited personal computer you could take with you on business trips and use to do more than just beat Tetris high scores.

Not much about the WorkBoy sounds particularly novel today. We live in an age when included features like an address book, calculator, and appointment book come with our smartphones. But remember: this was 1992. The accessory could have added a lot of value to something people viewed as merely a gaming device.

The WorkBoy was trademarked by Nintendo of America and showcased at CES 1992. Numerous outlets reported on it at the time, but the WorkBoy never went into production. One possible reason it never materialized is that it would have cost around $79-$89 USD, a hard sell considering the Game Boy itself typically fetched a similar amount around that time. Additionally, the price of necessary D-RAM chips increased dramatically following an explosion in a factory in Japan.

To use the WorkBoy today, you will need one of the two known units in existence. Good luck with that. One is likely buried somewhere in Nintendo of America headquarters, and the other belongs to Frank Ballouz, founder of Fabtek Inc. You also need a cartridge loaded with the necessary software, which was part of the “Nintendo Gigaleak” earlier this year.

IGN notes that Eddie Gill, the founder of Source Research and Development, also attempted to bring the WorkBoy to Game Boy Advance, with enhancements that would have included email, web browsing, and word processing. That also never happened. He also patented and licensed similar technology to Nokia, for use with the Nokia 9000 devices in 1996, so at least something came out of all that effort besides videos and blog posts about hardware that never quite made it to retail.

The Best Wrestling Pay-Per-Views of 2020