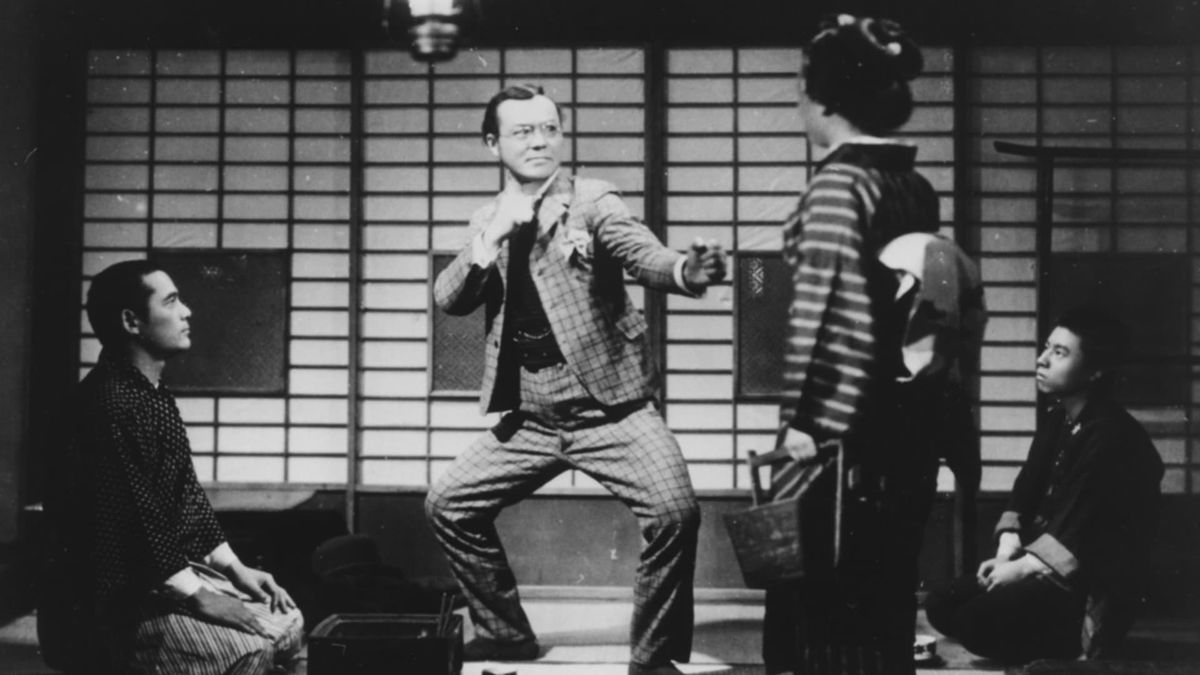 Akira Kurosawa’s feature-length debut opens with a wandering young man named Sanshiro Sugata (Susumu Fujita) arriving into town where he aspires to earn a place under the tutelage of a great jujitsu master. Shortly thereafter Sanshiro learns first-hand that he would be instructors are perhaps not all they are cracked to be. Their attempt to rustle a rival sensei’s feathers, Shogoro Yano (Denjiro Okochi) is ill-fated, as Yano handles each attacker with the greatest of ease. Much to Sanshiro’s surprise, the victor of the contest practices judo rather than jujitsu. Under the auspices of Yano’s strict but just guidance, as well as through the trials and tribulations and a martial arts tournament, that Sanshiro will learn to control his bustling energy, channeling it to become a better, more composed human being.

Akira Kurosawa is synonymous with Japanese cinema. Virtually any conversation, published article, or book surveying the breadth of film from the land of the rising sun simply must make at least passing reference to the great master. The sheer volume of his oeuvre, to say nothing of its variety and quality, is staggering. For all the existing critical appraisals of Rashomon, Yojimbo, Seven Samurai, and High and Low (but to name a smidgeon of his cherished works), precious little time is devoted to his earliest works, namely his official directorial debut from 1943, Sanshiro Sugata. Every filmmaker must get his or her start somewhere, even the legends.

Co-written with Tomito Tsuneo, the picture was conceived during the final years of the Second World War, a brutal contest in which Japan played a crucial, ultimately devastating part. As such, creative control was not something the government felt was best left entirely in the hands of hot young artists the likes of Kurosawa. Kurasawa himself was not even responsible for choosing the project and, what’s more, several portions of what would have made the final film were left on the cutting room floor. Interestingly enough, no effort is made to hide this truth from the public when watching the film as it opens with an approximately minute-long explanation about how the current final, if incomplete, cut of the film came to be. Understandably a level of frustration can be felt by many a cinephile upon learning of the stifling of a creative force such as Kurosawa, but such was the case back when wartime measures dictated many facets of life, in addition to the fact the filmmaker had not yet made his mark on cinema.

While a couple of sequences are clearly missing from the finished product, resulting in some plot points suffering from a lack of dramatic weight, there is a lot of quality to Sanshiro Sugata, starting with the performance of the lead man himself, Susumu Fujita. Fujita would not collaborate with the director very much throughout his career, which is a bit of a shame considering how superbly calibrated and entertaining his effort is in this picture. Sugata himself is at times a feverishly temperamental figure, ready and willing to push anybody around who might have a bone to pick with him. The energy level in these instances is an obvious precursor to the many wild roles a more popular Kurosawa collaborator, Toshiro Mifune, would deliver in the many years that followed. Sanshiro Sugata makes the hero’s journey emotionally compelling by having the titular student boxed in relatively early in the adventure. After a skirmish in the town’s streets, one night leaves Shogoro Yano’s school embarrassed, the latter scolds the scoundrel for his foolish ways. Sugata’s realization that he must change therefore comes quite soon after the film begins, setting him on a path that lasts the better part of the next hour. From that point onward actor, Susumu Fujita plays the part with a fine balance between a willingness to erupt and the very suppression of such inhibitions. There exists a strong desire to be better, for his sake, for the sake of his master and that of the lovely Sayo Murai (Yukiko Todoroki), daughter of his opponent (Takashi Shimura) in an upcoming tournament. In the grander scheme of Kurasawa’s body of work, Susumu Fujita is not the first of his actors that springs to mind, making Sanshiro Sugata all the more revelatory an experience.

Notwithstanding the cut sequences (for which the director cannot be blamed) and a couple of instances of clumsy imagery, such as a glowing flower used to represent humanity (for which the director can indeed be blamed), the movie is extremely well directed, featuring abundant examples of the trademarks he would go on to perfect in the near future as well as some spectacularly dynamic camera work. Working in tandem with cinematographer Akira Mumura, Kurasawa lifts what could have been a perfunctory story to soaring heights with camera pans that look far away ahead of their time. The frame will sometimes swoop down into an alleyway as a fight occurs or glide just past someone’s intense glare as they grapple with an opponent. The dynamism with which the filmmaker plays with the framing possibilities is enough to make one think Kurosawa made the film on the 21st. It is simply that action-packed, breathtaking really.

Sanshiro Sugata is an all-around pleasant excursion into Akira Kurosawa’s early days as a voice in filmmaking.

This being a film about judo and jujitsu, among other things, it serves up a nice dose of combat scenes, albeit ones dominated by a level of quiet violence. For combatants such as these, weapons are out of the question in order to save face. Additionally, the confrontations between the jujitsu and judo artists are set, for the most part, within the parameters of officially licensed battles set-up by schools. Finally, the very nature of the tug of war between these two wrestling styles implies that a fight can begin quite slowly, the two contestants grappling each other’s arms and sometimes just walking together, hoping to catch the other off guard in a split second. It obviously is not the sort of fast-paced, brutal events modern eyes might be accustomed to and requires, admittedly, some patience to appreciate. Of note is how Kurosawa edits certain final blows. For example, the nighttime scene in which Sugata witnesses Shogoro Yano’s incredible prowess is filmed along a river. This proves remarkably advantageous as actor Denjiro Okochi can toss his assaulters into the water, minimizing any risk of harm done to his fellow thespians. For indoor battles the options of capturing the action of someone being launched halfway across the room are more limited, therefore forcing the filmmakers to cut away from some of the more violent moments.

Sanshiro Sugata is an all-around pleasant excursion into Akira Kurosawa’s early days as a voice in filmmaking. Granted, said voice is stifled somewhat due to politically mandated alterations to the picture and not all of the plot points work as effortlessly as others (the aforementioned glowing flower is particularly silly). That said, it is more than worth his fans’ time. It frequently looks stupendous, features shockingly modern camera techniques and a well rounded, heartfelt performance from lead Susumu Fujita that anchors much of the drama.