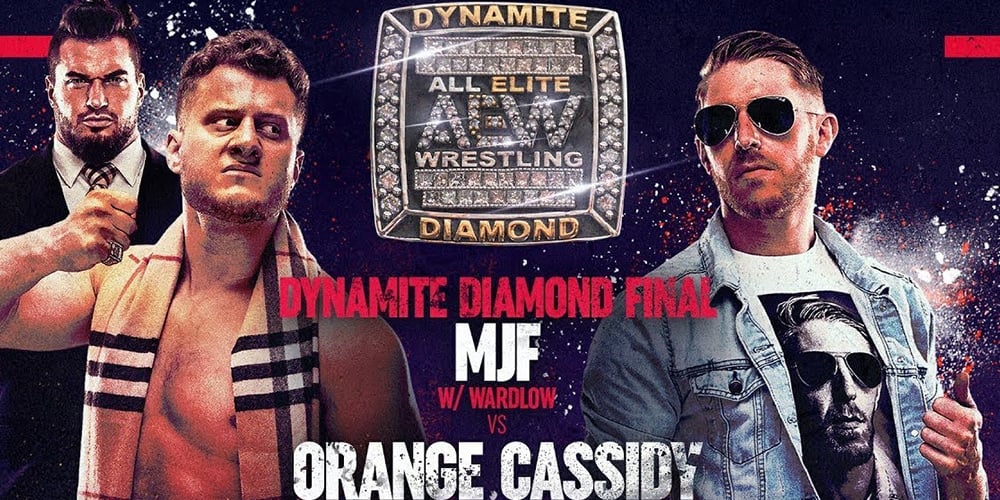 It’s been a week since the biggest episode of Dynamite to date. No one is suggesting that it was necessarily the best episode of Dynamite but some incredibly huge things went down, bigger than anyone expected. Some of them, no one saw coming like Orange Cassidy winning the chance to compete for a diamond ring.

.@Sting made it clear he’s not going anywhere but we still don’t know why he’s here – THE MYSTERY #AEWDynamite pic.twitter.com/TE32BZpxlw

Kenny Omega won the AEW World Championship, becoming the first man to pin Jon Moxley in singles competition. Then, he and Don Callis ran off with the title to Impact. After an appearance on Impact on Tuesday and on Dynamite on Wednesday, what this relationship between the two companies looks like is still up in the air. Only patience and time will tell.

Sting also made his debut with AEW last week, which naturally dominated the headlines. He appeared this week in the ring with Cody Rhodes. Again, little clarification was given as to his goals other than it has something to do with Darby Allin who was sitting in the upper deck.

The weird thing was Cody was actually out there to talk about something before Sting interrupted him. He never actually said whatever he wanted to say, which was a little odd. but Sting did play up his reunion with Tony Schiavone which was kind of cool.

.@Sting made it clear he’s not going anywhere but we still don’t know why he’s here – THE MYSTERY #AEWDynamite pic.twitter.com/TE32BZpxlw

Abadon also picked up a convincing win against Tesha Price, which played into her feud with Hikaru Shida. After the match, Hikaru came out to save Tesha. She blasted Abadon in the head with a kendo stick, only for Abadon to pull an Undertaker and sit up like nothing had happened. This match actually looks interesting.

TH2 managed to beat The Young Bucks in a non-title match, inevitably putting them in line for a shot at the championships. The Acclaimed also got involved, trying to jump The Young Bucks after the match. SCU ran out and cut that off immediately, setting up a match between them and The Acclaimed next week.

#FTR appeared for the first time since losing the titles, taking on the newly minted Varsity Blondes. Griff Garrison and Brian Pillman have been tagging together on Dark for a while. It’s nice to see them get a spot on Dynamite, even if they lost.

There was also a chaotic six-man tag team match featuring Lance Archer and the Lucha Bros taking on The Butcher, The Blade, and Eddie Kingston. Why Pac wasn’t involved was confusing at best. Eddie and his boys took Penta out before the match, leaving it as a three on two, situation.

Archer and Rey Fenix ultimately lost, though Archer did lay a beating on his opponents. Death Triangle versus Eddie’s Family is logical but Lance Archer in the mix makes the whole thing kind of convoluted. As an interesting side note, this was reputedly Archer’s first tag match in AEW. He doesn’t play well with others.

The confusing arc of the Dark Order

At this point, the Dark Order would have to try harder just to be confusing. Brodie Lee has been MIA since losing the TNT Championship back to Cody Rhodes. Reputedly, he has an ankle injury but his return has not been discussed and he’s barely been mentioned on TV. If it’s an angle, it’s taking way too long to play out.

In his absence, the Dark Order has been on a really weird recruitment drive. They’ve been making a full court press to get Adam Page to sign on. He’s been the focus of John Silver and Alex Reynolds, aka The Recruitment Specialists. The three of them will be tagging together next week.

Then, Evil Uno made a play for Dustin Rhodes after he defeated 10. The match itself was actually really good, showing Dustin still has the chops. Lee Johnson accompanied Dustin to the ring, his first real act as a member of The Nightmare Family.

These aggressive recruitment efforts make no sense. They already have way too many members, some of whom rarely wrestle. On top of that, Colt Cabana still hasn’t officially signed on to the Dark Order. They were also working on recruiting Tay Conti at some point but that seems to have fallen through the cracks.

The offer to join Dark Order has been extended by @eviluno.
Watch #AEWDynamite NOW on @TNTDrama. #AEWonTNT pic.twitter.com/efOlpRfDPp

Rather than adding members, the Dark Order should be looking at cutting a few loose. John Silver is on the verge of making a big move and could easily move on. Anna Jay also isn’t really getting much out of her membership. Whatever they do in the future, what they are doing isn’t working at the moment.

Shaq’s on Dynamite or something…

Jade Cargill made her confusing debut a few weeks ago, interrupting Cody and getting into it with Brandi. Since then, she’s only appeared in a couple of backstage segments. Jade has some sort of association with Nyla Rose, Vickie Guerrero, Ivelisse and Diamante. But that’s pretty much all anyone knows at this point.

Confusing the issue even further was a weird sit down interview between Shaq and Brandi. It was like AEW was setting up a match between the two of them, though some sort of match between Brandi and Cargill is a little more likely. The whole thing is a giant mess at this point, one that AEW needs to sort out asap.

There are a lot of moving parts in this whole thing. Including all the names previously mentioned, Serena Deeb, Big Swole and Red Velvet are all involved as Brandi’s crew. This is starting to look like an eight woman tag match in the making, but it also might not be that. Clarity is needed and quickly.

Bringing Shaq in is also an overall bad idea, especially if it pans out half as pointlessly as their partnership with Mike Tyson did. AEW needs to stop using celebrities with past associations with WWE. It makes them look like they’re picking up WWE’s old stories. Further to that concern, AEW is planning on a Snoop Dogg appearance in early 2021.

Orange Cassidy gets cheated once again

AEW seems to be having problems deciding what they want their push of Orange Cassidy to look like. He came out on top of his high-profile feud with Chris Jericho only to fail at capturing the TNT Championship. Tonight, he lost his Dynamite Diamond Ring match to MJF.

Keeping in mind that interference always plays a factor, Orange Cassidy losing these big matches undercuts his overall push dramatically. This one was especially rough as it was done to further Best Friends’ exhausting feud with Miro and Kip Sabian. The loss had little to do with Cassidy as he won’t be in the inevitable tag match unless Sabian and Miro make a friend. That seems unlikely.

It’s too bad as there was a lot of comedic potential in Orange Cassidy holding the Dynamite Diamond Ring. Instead, it will now be an inconsistent prop for MJF to barely use. There was a better story waiting for AEW in Cassidy winning the match.

At least they took a step towards Sammy Guevara leaving the Inner Circle and striking out on his own. The summit meeting between the Inner Circle members literally laid out the parameters of his departure. Now, it all just needs to play out over the coming weeks.

Why Jay White Going to WWE Is A...