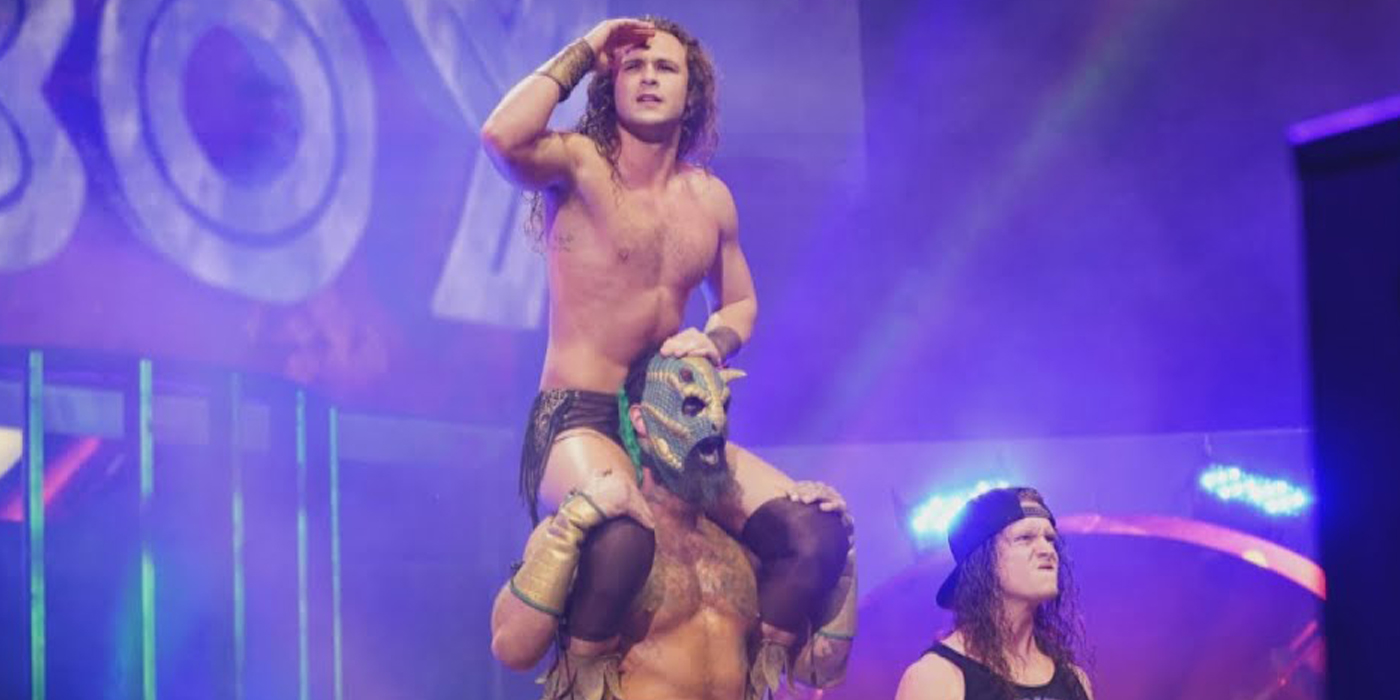 If you weren’t a fan of Jungle Boy before tonight, you had better be after that match. Jungle Boy and Dax Harwood absolutely tore it up in one of the best singles matches that AEW Dynamite has ever seen. And that was with all their friends handcuffed together at ringside.

A lot of the evening was focused on build up for the upcoming AEW Dynamite Beach Bash as well as AEW Revolution. It will be AEW’s first pay-per-view of the year and it’s already shaping up to be a hell of a night. But that’s more than a month away. There’s a lot to do between now and then.

So far, the only matches booked are The Young Bucks defending their titles against whoever wins the upcoming Tag Team Battle Royale. Once again, the AEW ranking system has proved to be irrelevant and inconsequential in deciding who faces the champs.

The other booked match pits Darby Allin and Sting against Brian Cage and Ricky Starks in a Street Fight. It’s unlikely that Taz, Hook and Powerhouse Hobbs won’t get involved, so Team Face Paint needs to make some friends real soon. It will be interesting to see how Sting fares in his first match in a very long time.

This episode of Dynamite was filled with pay-per-view caliber matches. The night opened with Eddie Kingston versus Lance Archer. Naturally, Archer was beating the crap out of Eddie until The Butcher, The Blade and The Bunny got involved.

Archer is one of the best big men in the business today. And it’s been a minute since he had a solid feud in AEW. This program with Eddie’s Family could be exactly what he needs to take things to the next level. That being said, the big guy still might need some backup.

Hangman Page took on Ryan Nemeth in his AEW debut. Nemeth, the brother of WWE’s Dolph Ziggler, lost as one would expect. The strange part was Matt Hardy was at ringside to offer his services to Page while somewhat burying Dark Order. Where this goes should be interesting.

The only Women’s Division match of the evening saw the red hot Shanna stepping up to Britt Baker. Shanna has been picking a lot of wins on Dark since returning to AEW. She looked great but the good doctor with Rebel in her corner was just too much for her.

.@Thee_Red_Velvet is HERE and has laid down the challenge. @SHAQ, @Jade_Cargill – The ball is in your court.
WATCH #AEWDynamite Wednesdays at 8e/7c on @TNTDrama pic.twitter.com/qOmH9zxwDv

Red Velvet deserves some praise for infusing some energy into whatever is going on with Shaq, Jade and Cody. She straight up called Jade out in a great promo on Dynamite. This is all leading up to a Revolution mixed tag match with Shaq and Jade on one side and Cody and Red Velvet on the other. That should be… interesting.

After winning the right to be the Inner Circle’s official tag team on last week’s Dynamite, Chris Jericho and MJF defeated the Varsity Blondes. It was a solid match, and Jericho looked great. But something needs to come to a head in the Inner Circle soon.

There are so many ways this storyline could play out that the mind actually boggles a bit. Whatever the plan is, hopefully it doesn’t take too long to get there. The Inner Circle obviously has dissention in their ranks but the longer it goes on without advancing the story, the more frustrating the storyline will get.

The whole thing works at the moment but no one wants to see them still arguing six months from now. Hopefully, this all end with Sammy actually competing for a title. And everyone wants to see Santana and Ortiz on top of the Tag Team Division where they belong.

The tensions between Jurassic Express and #FTR have been brewing for weeks. The latest installment featured Jungle Boy facing off against Dax Harwood in a singles match. There is an argument to be made that is might have been the best singles match Dynamite has had this year.

Dax Harwood rarely wrestles on his own but he looked incredible tonight. Plus, Jungle Boy continued to prove that he is going to be a huge star sooner rather than later. It honestly might be time to shift him away from tag team wrestling and put the focus on his singles career.

A big part of the reason why this match worked was the lack of interference. Tully Blanchard and Cash Wheeler were both handcuffed to Luchasaurus outside the ring. This prevented them from getting involved when Jungle Boy picked up the win via submission.

Naturally, Tully and Cash made up for it by helping Dax assault Jungle Boy after the match. They also trimmed the horns off the restrained Luchasaurus’ mask. It’s safe to say that this feud is far from over and is going to build up to something big.

Dark Order takes on The Elite

It was, overall, a solid match. From The Elite’s side, it was just build up to matches at Beach Bash and Revolution. The Young Bucks announced they were entering their own number one contender Battle Royale. They them implied that they would call out the Good Brothers if they won.

Now that has been set up, it seems likely outcome for the match. If all the Battle Royale amounts to is a win for The Young Bucks and them facing the Good Brothers, it’s kind of a waste. Fans would rather see one of the many great AEW tag teams get an actual title shot.

In the end, the Dark Order was the star of the match. Stu Grayson and Evil Uno continued to prove they are a contender for the best tag team in AEW. Alex Reynolds might not be the flashiest wrestler but he’s damn good. And John Silver was epic, as always. Dark Order is about to become the top babyface faction in the company.