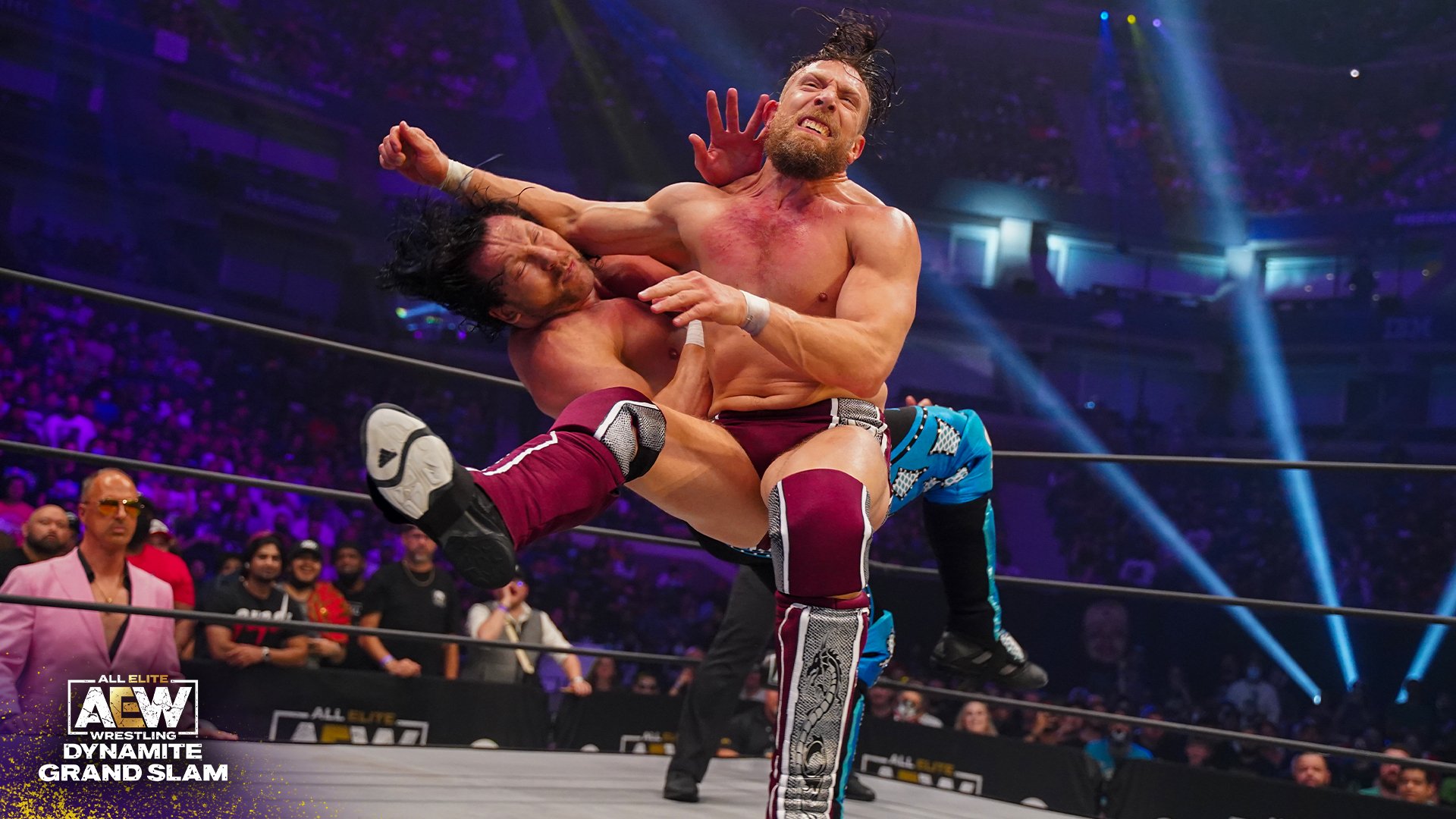 While we’re all on a post-All Out 2021 simmer, AEW has come at us with another stacked show: AEW Dynamite: Grand Slam. On a single night, in 2021, outside of WWE, on free TV, we had Bryan Danielson, CM Punk, Kenny Omega, and Sting either wrestle or cut a promo. Utter madness.

Reviewing Dynamite: Grand Slam was always going to be a tricky one as it was never going to be as good as All Out. It couldn’t be. It almost feels comparable to WWE’s Raw after ‘Mania and how that’s become an annual pseudo-event, only Grand Slam is a couple of weeks after the pay-per-view. Still, seen as though it’s a special occasion now permanently marked on the AEW calendar, let’s have a look at how night one went down.

Hot damn. What a way to start. AEW knew they’d just get ‘Yes!’ chants all night, so instead of having it take over the show, they repeated what they did with Punk’s first appearance in Chicago and got it out of the way first -though in hindsight it may not have been the best move, more on that later.

We started with the Danielson classics -’Yes!’ kicks, running knees, the usual- before getting considerably more innovative. Plenty of technical wrestling and stiff strikes throughout just as you’d expect with these two. Alongside this match and Moxley’s recent bouts, AEW is letting its NJPW side loose.

While that was all great, the best part of the action was the exchange of counters. Each man took turns reversing the other’s offence in ever more creative ways. A highlight of it being Bryan turning a One-Winged Angel into a Reverse Hurricanrana.

The match ended a bit limply. Not because it finished with a time limit draw, that felt inevitable, but rather that the last section seemed rushed. It was like they had a lot more they wanted to do and had to cram it in after the 45-seconds-remaining announcement came.

A great first match for Grand Slam that will definitely see a follow-up. It felt like the first chapter of a story.

Not a match -that’s happening on Friday- but seeing CM Punk come out after Bryan left was a strange sight so I deemed it worth a mention here.

Punk sold the upcoming match, a bit. The initial promo with Taz setting up the bout a couple of weeks back felt quite forced and it’s been all about Punk from there. We’ve had no reason why Hobbs could be a viable contender for a win and, as it’s been pretty one-sided, Team Taz has looked quite silly in the process. Good promo, but it’s not really selling the match. I can’t remember the last time a match’s result has felt this predictable, but maybe that’s the point? Is there a swerve coming? Will Hobbs win? Am I accidentally being swerved by thinking this much into it?

Curtis Axel, Garrett Bischoff, David Flair, Ted DiBiase Jr, David Sammartino. When will the wrestling industry learn that pushing someone based on the fact that they’re the child of a wrestler isn’t going to work. Give Pillman Jr all the screen time you want, AEW, but if you keep bringing up his dad, this is doomed to fail.

The match was thoroughly fine. MJF is still great. That is all.

Oh my, oh my. The people at Dynamite: Grand Slam did not like Cody Rhodes. I’m sure that you, like me, had the genuine fear that Cody was going to win this one and completely derail Black’s momentum. That would’ve crushed the aura of Black, much like when Goldberg squashed The Fiend -and look at where that got Wyatt. It would’ve also made Cody even more disliked. Thankfully, that was not the case.

It felt like a standard Cody match. However, it almost looked like Cody was being bothered by the ‘boos’ at multiple points. Whether that was genuine, or character work, I’m not sure. The match concluded with a mist from Black, which will presumably be one of his things going forwards now. A Black Mist. Malakai got the pin with Cody looking desolate in the ring. The right decision, but something tells me this isn’t over. Hopefully, Cody comes out of all this as a heel because this overly patriotic character has been the worst part of AEW for a while now.

Everything Sting can or will do will go down great with the fans. Of course, it will, it’s Sting. Darby can do no wrong either and FTR is the best at what they do. However, these are two duos with very contrasting styles. Meaning their match at Grand Slam match was fun enough for what it was, but it’s not something you’re going to remember a month from now.

The finish told a nice little story. As the weakness of FTR is always in keeping them apart, while Sting got the submission on Harwood, Darby took out Wheeler with a Coffin Drop before the interruption. A nice bit of simpatico between the two. Hinting at more of a tag-division-centric future for team Moody Goth going forward?

Britt Baker matches seem to have a pattern to them, that being: it starts off quite clumsy and gets really good in the second half. That was the case here. Soho is a welcome addition to a division that was given a good boost by All Out 2021 and this proved to be a great TV debut too. There was one problem though, the crowd. You could tell they were starting to drop off quite a bit and, apart from a few instances, it really took away from the match. It was evident that a large section of the arena was there for the Bryan Danielson debut.

The result was a predictable one as Baker vs Rosa 2 looks inevitable in the not too distant future. Still it was a good end to the show, but you do feel it could’ve changed places with the Bryan-Omega match. I know I mentioned the Punk debut comparison earlier, but this felt different and I feel Baker-Soho would’ve had a much better reception if it had opened the card.

With part two still to come on Rampage, Grand Slam is off to a good start. The show’s quality fits nicely between TV and pay-per-view caliber. While the pacing was a bit off, resulting in the crowd tapering off during the night, it was still a solid night of rasslin’. Come back on Saturday for a look at Grand Slam night 2.