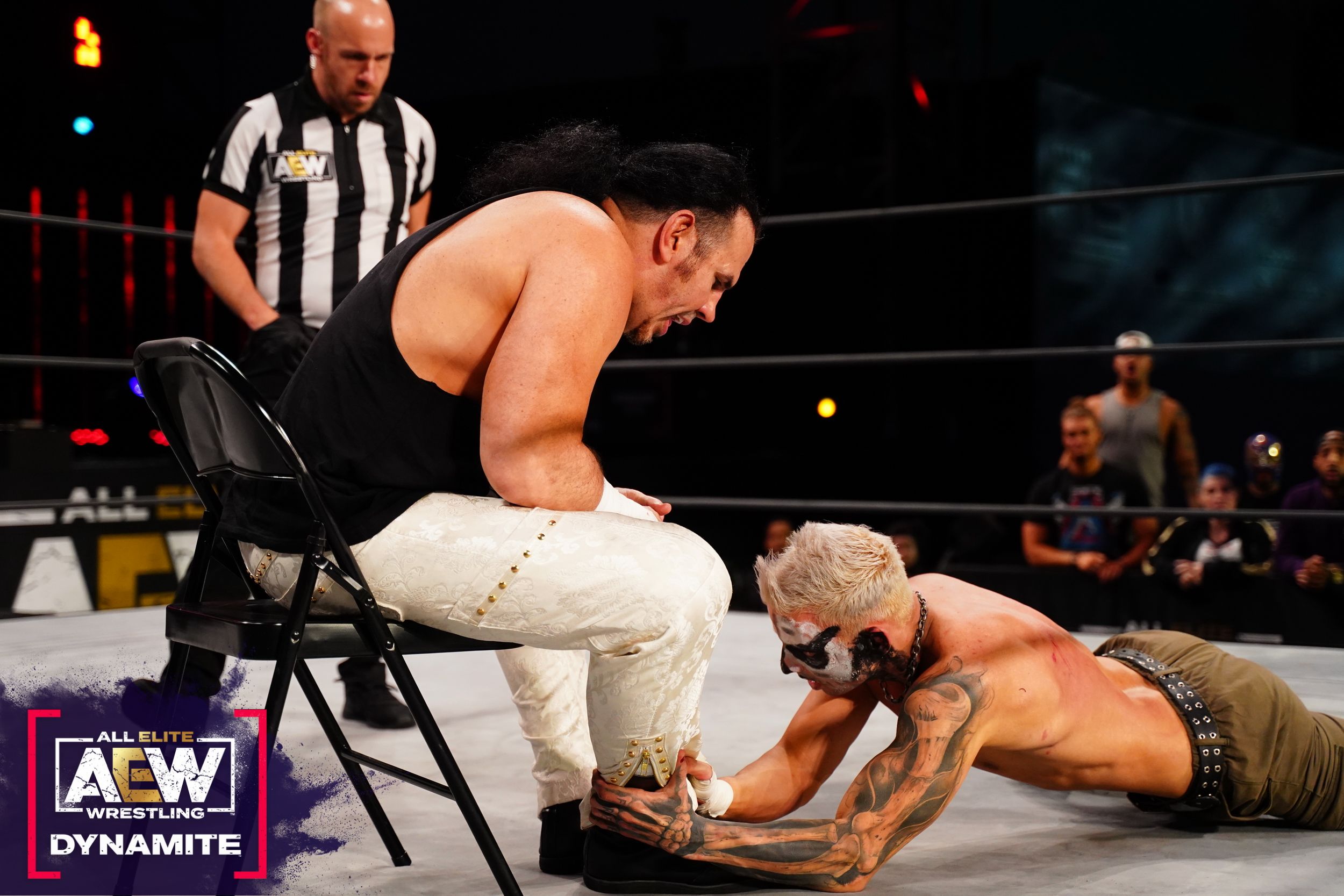 The main event between Darby Allin and Matt Hardy for the TNT Title on AEW Dynamite -14th of April, 2021- involved a mid-match run-in from two stables.

Earlier in the night, the bout between Dax Harwood and Chris Jericho had a mid-match run-in from two stables as well. It’d be nice to say that a clustered brawl in the middle of a singles match is a rarity for AEW, but as you can probably tell from the title, it definitely isn’t.

The clash between The Inner Circle and The Pinnacle that’s building as of late means that their interruption of the Harwood-Jericho fight at least makes some sense. It’s a bit lazy considering the amount it happens on Dynamite, but it’s excusable.

There was also Christian’s promo which was interrupted by a, well, more of a saunter-in by Team Taz. It ends up in a beatdown too. Less of a run-in, though it still counts to an extent as it ended in fisticuffs.

The issue really begins to show its face with the main event. Not only did one of these now-cliché group run-ins happen already that night, but there was absolutely no real reason for it to happen again. Darby and Matt were having an entertaining No DQ match before Hardy’s crew, whatever they’re called, ran to the ring and started beating down Allin. The Dark Order sprinted to the ring too along with Sting for the assist.

Sting being there makes sense because he’s Darby’s dad, uncle, mentor, accountant, or something, but what does The Dark Order have to do with all this? Is it because they both like to wear dark colours? Is that the link?

At this point you’ve almost got to think that they’re just doing it because they really like run-ins. It must be Tony Khan’s kink.

WWE gets a lot of stick for having matches end in DQs when they don’t want either side to lose. The thing there is -which is the most annoying part too- is that it’s their own doing. They don’t have to book the match, though they do anyway. WWE have a habit of creating their own problems and suffering the fan backlash from it. As they say: ‘You’ve worked yourself into a shoot, Brother.’ WWE does the group run-in thing too in the build-up to Survivor Series where the brands predictably invade each other every week for a month or so, but at least that only happens a few times a year.

You could almost say that AEW’s run-ins are their personal equivalent. It’d make sense if the matches they did it in resulted in DQs, but as this week’s Dynamite proved, that’s not always the case.

So is it to build excitement? After all, a surprise mass brawl can be fun if done right. Though when you do it every week, it almost becomes more of a shock when it doesn’t happen.

So What Should Happen Instead?

The old proverb goes: “Variety is the spice of life”. It’s more than just an inspirational saying you’d find on John Cena’s Twitter, it applies here too. AEW needs to mix it up a bit. Let’s take that Darby-Hardy match, for example. The run-ins achieved nothing. It still ended as a singles match and the gang warfare proved to be just a little mid-match distraction. You could say that Allin looked a bit more resilient in victory because he took a bit more punishment as a result of the group beatdown, but that’s about it. Pretty weak reasoning.

So if they wanted a little more excitement still, maybe try something different. How about they run into someone backstage with a history with Darby, like Brian Cage? You’d get the same beatdown, only now it’s more unexpected. Have some exciting weapons, or a few cameos. Maybe even a brawl into the crowd that involves a few pre-placed roster members. Have Sting appear mysteriously in shot through the backstage part of the brawl like he’s watching over Darby from a distance like a caring sensei, or whatever he is.

To be honest, they didn’t even need this group brawl. It was a No DQ match involving Matt Hardy and Darby Allin, it wasn’t like jumping off of something high or taking a few nasty bumps was unlikely to happen. It was always going to be exciting.

We shouldn’t take anything away from AEW Dynamite’s main event because it was excellent. They just need to calm down with the group run-ins. Yes, they have a lot of stables that need some screen time, but there are other ways to do it, AEW.