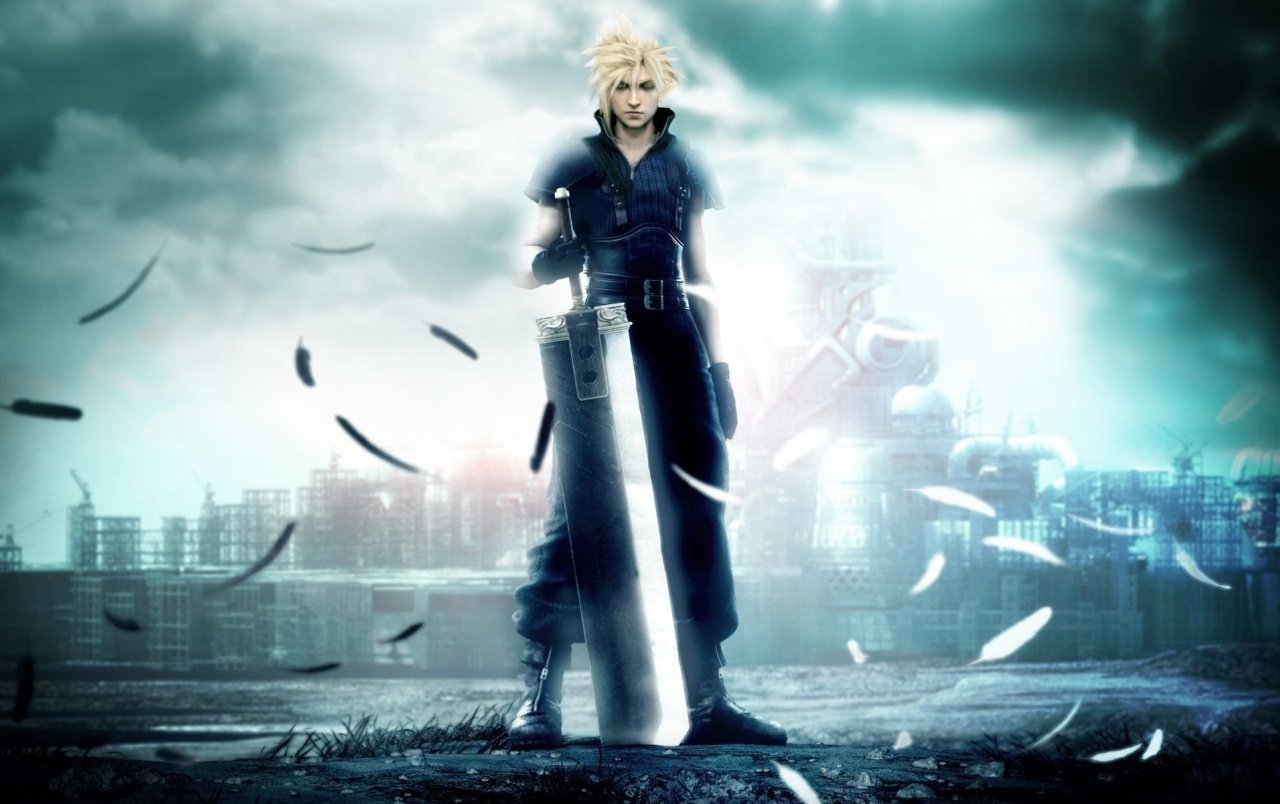 “I am your living legacy.”

There’s a poignancy to Red XIII and his brood howling over an overgrown Midgar at the end of Final Fantasy VII. Meteor succeeded in wiping out everything deemed harmful to the planet, and mankind is nowhere in sight. Humanity’s fingerprint, Midgar, has even been claimed by nature. It’s a thought-provoking ending, but one ambiguous by design, neither confirming nor denying that humanity survived– and why should it? Much of Final Fantasy VII centers around depicting the reality of death. The end will come for all of us eventually, but it’s not our place to know when, how, or why. Death is an inevitability, one we cannot reasonably comprehend.

There are two major deaths depicted in Final Fantasy VII: those of Aerith Gainsborough and Zack Fair, both of whom share a deep connection to protagonist Cloud Strife. Occurring roughly halfway through the game, Aerith’s death marks a major turning point. Cloud not only fails to save her from Sephiroth, he nearly kills Aerith himself. Cloud is the most affected by Aerith’s death, but every member of the party reflects on her sudden murder. Tifa in particular notes that Aerith constantly mentioned her plans for the future, squashing any notion that she would have wanted to die a martyr. Although Cloud himself abides by the idea that Aerith knew Sephiroth would kill her, Final Fantasy VII keeps it ambiguous as in keeping with the incomprehensibility of death.

Chronologically, Zack Fair dies years prior to Aerith’s, serving as the catalyst for Cloud’s arc. Experimented on by the Shinra Electric Power Company, Zack Fair manages to free himself & Cloud, and go on the run. It’s implied Zack took care of a near catatonic Cloud for quite some time, keeping them both alive on their way to Midgar. Before they can ever reach the city, however, Shinra soldiers unceremoniously gun Zack down in the rain. Cloud is left to die, and suffers a mental breakdown over the death of his best friend. The two do not get to say goodbye, and Zack’s death is contextualized as nothing more than a painful moment in Final Fantasy VII– one that psychologically damages Cloud beyond belief. There isn’t anything romanticized about either of their deaths.

Applicable to both characters albeit specifically in reference to Aerith Gainsborough’s death, game director Yoshinori Kitase stated, “In the real world things are very different. You just need to look around you. Nobody wants to die that way. People die of disease and accident. Death comes suddenly and there is no notion of good or bad. It leaves, not a dramatic feeling but great emptiness. When you lose someone you loved very much, you feel this big empty space and think, ‘If I had known this was coming I would have done things differently.’ These are the feelings I wanted to arouse in the players with Aerith’s death relatively early in the game. Feelings of reality and not Hollywood.”

Naturally, one would hope that any sequel to Final Fantasy VII– should there even be a sequel to a game that ended with a 500 year fast forward– would carry over that same tact in depicting death. Set two years after the end of the game, humanity did survive Meteor’s impact, but they’re in dire straits. “It looks like the Planet is a lot madder than we thought,” so spoke Marlene. With an incurable disease, Geostigma, serving as a death sentence for anyone who contracts it, Advent Children opens with the implication that the situation has only deteriorated for mankind.

It’s a strong enough premise for a sequel, admittedly. How does mankind persist after the end? As Cloud himself is suffering from Geostigma, Advent Children has an opportunity to explore death on an even more intimate level. Cloud quite literally begins the film marked for death. With Cloud abandoning the Buster Sword overlooking Midgar where Red XIII will someday stand, the bones are there for Advent Children to serve as a sensible enough sequel. Unfortunately, there’s a disconnect between what actually happened in Final Fantasy VII and how Advent Children remembers the past.

Egregiously, Zack’s death has been recontextualized. For the most part, Advent Children actually adapts Cloud and Zack’s backstory as is, but it pivots at the very end. Zack is still shot down in the rain, but the Shinra soldiers don’t finish him off. Instead, Zack is left to die alongside Cloud. This may seem like an inconsequential change, but it creates one incredibly important difference: Zack has last words now. With his dying breath, Zack begs Cloud to become his living legacy. Ignoring how this closure flies in the face of how FFVII depicted death, it’s completely tone-deaf that Zack asks Cloud to be his literal living legacy when Cloud’s entire arc in Final Fantasy VII centered on him shedding his resemblances to Zack to become his own man.

Cloud is now haunted by his failure to live up to Zack’s memory, tortured by the idea that he may have failed to honor Zack’s final wish. Zack’s death is supposed to be Cloud’s breaking point, one of the worst moments of his life. Cloud’s psyche twists itself into mirroring that of another’s. For Advent Children to reframe the scene as a ceremonial passing of the torch is frankly a bit twisted. Worse yet, however, is Zack speaking to Cloud from beyond the grave alongside Aerith. Now a part of the Lifestream, the lines between life and death no longer matter as the dead can simply interact with the living.

It’s implied Aerith is helping via the Lifestream at the end of Final Fantasy VII, but she does not speak to the party. She is not seen. She is not a tangible presence. For her to appear at the climax or interact with anyone at all would spit in the face of everything her death stood for. Advent Children fails to see the value in a realistic approach to death, mythologizing the Lifestream and Aerith in the process. Worse than the Lifestream, is the romanticizing of death altogether. Zack’s death can’t be hollow, and Aerith’s can’t be the end for her.

Keeping in mind Advent Children released 8 years after Final Fantasy VII, characters like Zack and Aerith were able to garner their own legacies. Zack as an important aspect of Cloud’s backstory tucked away primarily in secret scenes, and Aerith whose death stands out as one of the most important narrative moments in the history of the medium. As a long anticipated sequel to Final Fantasy VII, Advent Children aims to capitalize on everything that made the RPG’s story so beloved, but it overindulges to extremes. One of the film’s earliest slaps to the face being the sudden reveal that Rufus Shinra is alive. A core villain in FFVII, Rufus is clearly seen dying in a cutscene. Advent Children realizes how ridiculous this is and even has Cloud cutting off Rufus explaining his survival as a joke– which really says it all.

An important character who dies on-screen comes back to life and the explanation for how they survived is brushed off for a joke. It’s not funny, nor is it endearing. Rufus’ revival is fan service at the expense of thematic cohesion. Worse yet, even Sephiroth has to get in on the action. Like Zack and Aerith, Sephiroth quickly earned his status as one of gaming’s all time great villains. Through Kadaj, Loz, and Yazoo– the titular Advent Children– Sephiroth has three successors desperate to literally become him. The film naturally concludes with Cloud defeating Sephiroth yet again, but it isn’t the derivative nature of the finale that muddles things, nor the lack of weight. Rather, it’s the fact Advent Children went out of its way to cure Cloud’s Geostigma.

Aerith playing an active role in the film post-death and Zack passing on his will to Cloud fail to understand what made Final Fantasy VII so compelling. Similarly, Rufus and Sephiroth’s revivals show that death as depicted for the audience is losing meaning in the universe. As frustrating as these elements are, they’re not nearly as bad as Cloud never needing to face death in any meaningful capacity. He runs away from Geostigma, fails to properly confront his emotions as a now fully developed character, and is then magically cured courtesy of Aerith & the Lifestream. Zack and Aerith even reject Cloud’s death from the afterlife. There are no feelings of reality here, just Hollywood.

Final Fantasy VII: Advent Children is simply not a coherent sequel for a game that took such an intimate, respectful, human approach to death. The film is desperate to not only give death meaning but to ensure that it has no permanence. Death in Advent Children is not relatable, and there is little human about it. No matter how entertaining the film’s action may be, or how visually impressive it was for its time, nothing can change the fact that Advent Children misrepresents Final Fantasy VII where it matters most.