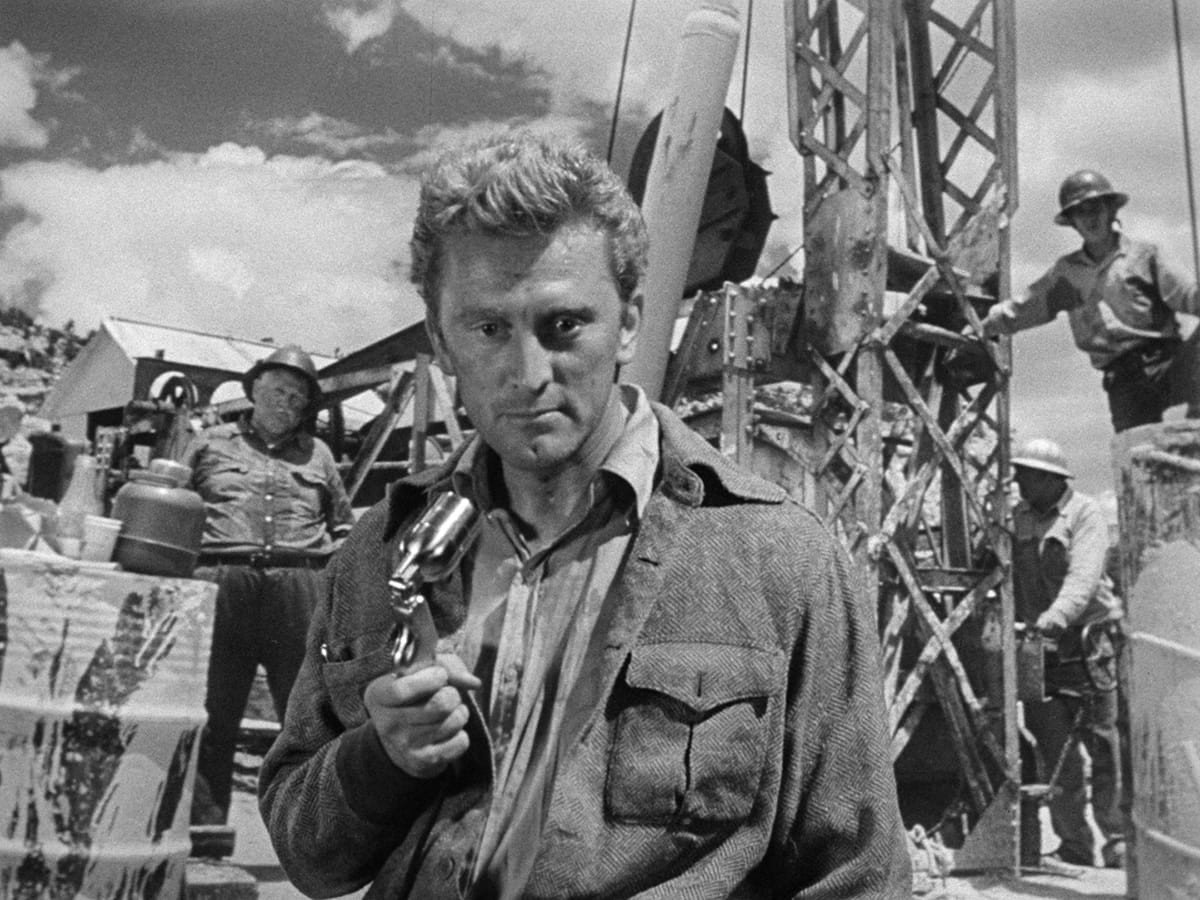 Ace in the Hole is a quintessential Billy Wilder movie. Though largely ignored upon its initial release, this 1951 feature bears all the hallmarks one associates with Wilder’s best work: cynicism, humor, terrific performances, sharp dialogue, and impeccable direction. Here, to keep within the theme of the title, we get it all in spades.

The Criterion Blu-ray of the film likewise boasts an abundant assortment of features. There is of course the new restoration, which looks great, as well as a commentary track with scholar Neil Sinyard, a brief afterword by Spike Lee, and interviews with Kirk Douglas and cowriter Walter Newman. The insert booklet, with essays by filmmaker Guy Maddin and critic Molly Haskell, is cleverly assembled as a foldout mock newspaper. And the documentary, Portrait of a “60% Perfect Man”: Billy Wilder, along with excerpts from a 1986 Wilder interview at the American Film Institute, gives considerable insight into the director’s filmmaking processes and includes numerous anecdotes and comedic quips.

In the film, Douglas stars as Chuck Tatum, a newspaper reporter who has bounced around from city to city, having been fired from nearly a dozen different publications (some of the best, as he would be sure to note). With Tatum, Douglas takes his generally admirable screen persona and dramatically flips it on its head. In the interview here, he admits dangerous roles excite him, and while he played similarly ruthless figures in films like Champion and the Bad and the Beautiful, his role in this picture is notably callous and self-centered. Maddin, whose essay reads as his films look, states that Ace in the Hole “might be Kirk’s best-of album.” Douglas fires on all cylinders in this film, as only he can. He’s charming to get what he wants; he’s theatrically dramatic to hammer home his points; he’s emotionally animated just when the audience needs to get in his corner, or at least try to. But this isn’t easy. Tatum is no heroic figure. He’s cocky, impudent, conniving, and, to make matters worse, competent. The character’s introduction says it all. He’s first seen casually reading a newspaper in the front seat of his convertible … as it’s being towed down an Albuquerque street. Treating the tow truck as his own personal chauffeur, Tatum instructs the driver to pull over in front of a newspaper office, the Sun-Bulletin. “Wait here,” he instructs. Inside, after breezing past a Native American employee clipping from the papers (a condescending “How” is Tatum’s greeting to his future coworker), he demands to see the boss. Granted the visit, Tatum proceeds to tell the publisher that he read his paper that morning over breakfast, and it made him throw up. More bravado and derision follows — and he’s hired.

A year into his new beat, Tatum is fed up. While he has everyone under his spell (this East Coast guy talks a good game, and look how he lights his match on the typewriter!), he’s nevertheless growing anxious and bored by the lack of groundbreaking news. He’s longing for the big story. He even fantasizes about the worst happening: tornadoes, explosions, murders, rattlesnakes loose in town. Something … anything. Assigned to cover a snake hunt (not what he had in mind), Tatum lucks out by stumbling onto a relatively minor tragedy when stopping for gas. Gas station owner Leo Minosa (Richard Benedict) is trapped in the partially collapsed and now perilously unsteady Indian cliff dwelling known as the Mountain of the Seven Vultures. Tatum sniffs out a possible story and investigates. It turns out the site is believed by natives to be protected by ancient spirits. Did these angry beings from the beyond have a hand in the accident? Of course not, but that would sell papers. So Tatum begins his coverage.

Milking every incident and development for all it’s worth, Tatum takes charge and gets local law enforcement, television, and Leo’s family on board. Before long, curious crowds gather and it’s clear to Tatum, as well as Lorraine Minosa (Jan Sterling), who cares little for her husband, above or below ground, that there is money and fame to be had. The Minosa’s gas station also offers food and novelties, and poor Leo’s plight is good for business; a lot of visitors equal a lot of mouths to feed. In the American way, as Spike Lee points out, “If there’s a buck to be made, it’ll be made.” Mrs. Minosa, who could give Tatum a run for his cunning money, even brings in a carnival, an outrageous yet somehow natural step in this ever-evolving circus (an alternate title of the film was, fittingly, “The Big Carnival”).

Tatum does pretty well for himself, weaseling his way to become the primary media source for information, a local icon who seems to have Leo’s best interests in mind; Leo even considers him his best friend. But while thousands of onlookers gather to witness the excavation (all charged admittance), Leo’s condition in this subterranean Jenga game grows increasingly hazardous. The drama that surrounds the rescue, much of which is stimulated by Tatum, begins to overshadow the man himself. There could be a quick and easy way to get Leo out, but that would reduce the publicity and the income. Since personal gain is the name of the game, Tatum manages to prolong the ordeal by suggesting an alternate rescue. “Everybody likes a break,” says Tatum’s young photographer. “We didn’t make it happen.” But is he asking him or telling him?

The concept of yellow journalism was nothing new in the early 1950s, but Ace in the Hole as a sellable property was shockingly risky. It’s likely the bitterly pessimistic and extraordinary vision of the whole thing that contributed to the film’s box office failure. Seen in 2014, though, it all seems so tragically real, so frighteningly probable. Molly Haskell puts it like this: “Already in the squawking, hawking opportunists are our own telegenic communicators in embryonic form, the self-promoting reporters donning bedouin robes or Muslim chadors or hurricane slickers to provide twenty-four-hour coverage of themselves at the ego-center of hot spots and sleazy ‘human interest’ tabloid stories.” Tatum would fit right in this age of continuous news cycles, bombastic “news” personalities, and careless Twitter-based news reporting (#sevenvultures, #saveleominosa, #tatumpulitzer). To say that the Oscar-nominated screenplay by Wilder, Lesser Samuels, and Walter Newman was prophetic would be a grand understatement. Spike Lee suggests a double bill with this film and Elia Kazan’s A Face in the Crowd, two films he rightly notes had their crystal ball.

Kirk Douglas perhaps sums up Ace in the Hole best, noting its “biting, sardonic humor,” which is still remarkably modern and not at all old-fashioned. It’s as hard-hitting as ever. As for Wilder, simply put by Douglas, “Billy’s a giant.”