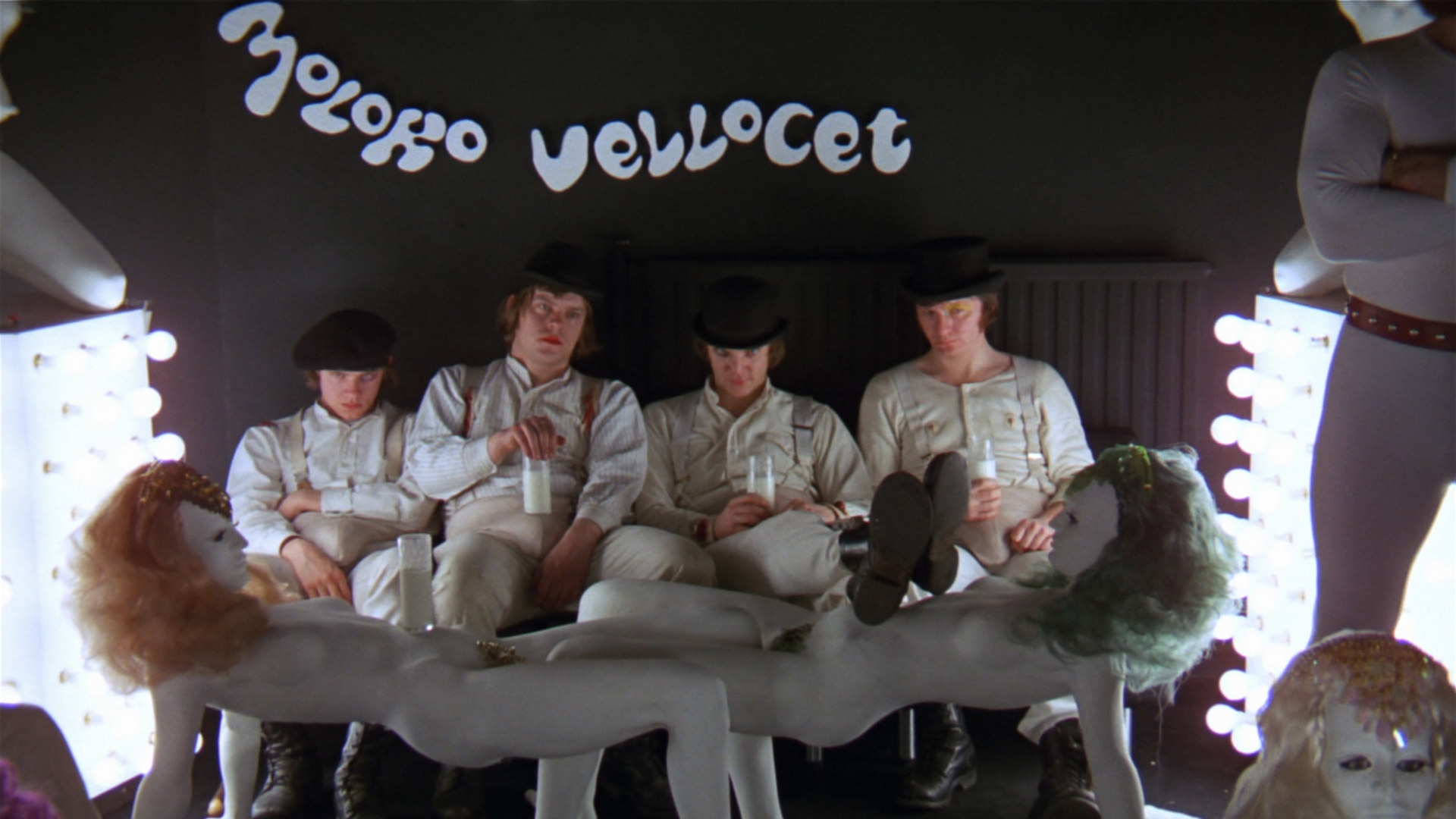 It is also a mark of how flyweight mainstream moviemaking has become that while the movie’s violence doesn’t seem like so much, Clockwork remains a disturbing, resonating movie which burrows into the brain much like the film’s eye-bulging “Ludovico Treatment.”  And that is why the violence, for all its relative toothlessness, still impacts – because it means something.  Made today, Clockwork would undoubtedly have come from a small company and be put in limited release on the art house circuit because it would be believed – with fair reason – there’d be no mass audience for it.  Again, shame on us.

For Kubrick, A Clockwork Orange was the crest of an incredible professional ascension.  He’d started in the early 50s on small, independently-produced films, breaking through to the big time in 1960 with Spartacus, arguably the best and most intelligent of the sword-and-sandal epics of the 50s-60s.  The blockbuster success of Spartacus bought him the license to chart his own course in Hollywood, one in which he never played safe, instead, pursuing ever more adventuresome projects.  He followed Spartacus with Dr. Strangelove or:  How I Learned to Stop Worrying and Love the Bomb (1964), a movie which turned the threat of nuclear apocalypse into fuel for the darkest – and funniest — of black comedies.  Thereafter came his sci-fi tone poem, 2001:  A Space Odyssey (1968), an audacious non-narrative epic that remains one of the most unconventional big-budget mainstream films ever released by a major studio.

Kubrick’s ability to find commercial success with such seemingly non-commercial material led Warner Bros. production chief John Calley to offer the filmmaker a permanent home at Warners, free to pursue whatever projects he chose and to take as long to develop them as he needed.  It was an unprecedented – and remains unmatched – offer of Hollywood studio largesse. A Clockwork Orange would be the first of five features Kubrick would make at Warners which remained his production base until his death in 1999.

Reacting against the monstrously elaborate production which had marked 2001, Kubrick shot Clockwork with an uncharacteristic economy.  Nearly all of the film was shot on available locations (supposedly, only one set was built for the production), using a minimal lighting kit and the then-new wireless microphones to provide a natural sound.  From the beginning of production to release was a span of about a year – for the usually snail-paced Kubrick, practically a land speed record.

Yet the film looks as meticulously crafted as any of his films, and –  with the exception of a few bits of electronic hardware – wonderfully undated.  Kubrick wanted to depict a future just slightly ahead of the present day, and the blocky, characterless new apartment flats and sleek Ikea-esque furnishings mixed with the decaying edifices of yesteryear do the job just as well today as they did 50 years ago.

It remains an aesthetically daring and challenging film as well:  think of Kubrick’s long, static, but meticulously composed shots, his willingness not to dilute the gang argot from the original Anthony Burgess novel, an uncompromising portrayal of its malevolent central character, and its morally ambiguous, ultimately downbeat stance.

Despite its modest futuristic trappings, Kubrick was not talking about the future. Clockwork was just the mildest extrapolation of contemporary dysfunctions, and there’s little in the movie audiences in 1971 – and, sadly, in 2011 – couldn’t recognize:  family breakdowns, lawless youth gangs in the streets, overwhelmed and ineffective law enforcement, politicians and interest groups desperate to glom on to any espoused cure-all to curry favor with the public. Clockwork is less about the future than it is a funhouse mirror rendering of the present.

Its moral ambiguity – so characteristic of American 60s/70s cinema – might be its most challenging aspect in an age dominated by superhero movies and their moral hyperclarity. Clockwork pits the value of free will – even a corrupted, depraved free will – against forced obedience.  Convicted felon Alex DeLarge (Malcolm McDowell in an amazing debut performance), to gain early release from prison, volunteers to take “the Ludovico treatment,” a sort of Pavlovian conditioning the new administration touts as a cure for the rising violent crime rate.  But the treatment is no more than a set of chemical handcuffs.  It does not cure Alex of his affinity or taste for violence, he develops no guilt, no conscience, it does not release the better angels of his nature.  He is still the same impulsive sociopath, only now, whenever he considers turning to violence, he suffers crippling nausea.  He’s no more truly cured than handcuffing a wife-beater cures him of wife-beating.

Worse, the treatment turns Alex from victimizer to victim which is what happens when Alex is “cured” without curing the violent, morally anarchic culture which created him; his doctors have cured the symptom, not the disease.  Unable to resort to his talent for “the old ultra-violence,” Alex is now at the mercy of a society that remains brutal and vindictive, and here Kubrick manages the trick of turning Alex – a thieving, sadistic, rape murderer – sympathetic.  The only “happy” ending – and face-saving turn left for the government which had de-fanged Alex before turning him loose among a fanged public – is to turn him back into the uninhibited, gleefully malevolent little shit he was before.  And so they do.

There are no simple solutions in A Clockwork Orange because there are no simple problems. That hasn’t changed in the last 50 years or the last 140 years.  It’s entirely probable future film aficionados will be looking at the 80th-anniversary re-release of A Clockwork Orange remarking on how sadly relevant the movie continues to be, and marveling that at one time people lined up around the block to see such a movie.

50 Greatest Christmas Movies of All Time

Spider-Man: No Way Home is the Best Spider-Man Yet