Season 5: The Absurdity of Reality

Those who lauded The Wire for its strict realism over four seasons often dismissed more adventurous turns on the show, as evidenced by the genre influences we’ve seen. In many ways, season five is David Simon’s boldest venture, as he and his writers would introduce more satirical elements and position the show into a more absurdist realm.

Hampered by departmental budget cuts, and with the Marlo Stanfield wiretap in jeopardy of being shut down, Jimmy McNulty devises an ingenious if hare-brained scheme: fabricate a serial killer then divert the investigatory funds to a secret wiretap. It’s a Hail Mary plan and one whose absurdity David Simon relishes. McNulty fashions his killer out of tried and true tropes designed to gain media attention: daddy issues, fetishistic tendencies, a killing calling card. His creation preys on the weakest among us (he repurposes homeless deaths as murders by exploiting a departmental oversight), becoming a mirror to the city of Baltimore as a whole. The homeless aren’t worthy of attention until a juicy narrative can be applied to them. The scheme is a giant Fuck You to the institution that has compromised its ethics and marginalized its workers.

For this reason, much of season five has been maligned for its looseness with plausibility where other seasons seemed to rigidly adhere to reality. But such a criticism discounts Simon’s larger point. The failures of the system are so outrageous that the only rational response is a complete perversion of the norms of investigation and of justice. This “by any means necessary” approach pushes the show’s characters in places both logical and precarious. McNulty falls off the wagon, succumbing to drunken binges and late night trysts. Lester Freamon (Clarke Peters) decides to hitch his ride to McNulty’s scheme in order to nab one last big fish before he retires. Kima Greggs (Sonja Sohn) must discover what being a natural police officer really means. Carcetti threatens to betray his political core in the name of a governorship. And Marlo grows more devious in his methods to gain total control over the city’s drug trade.

Perhaps no two characters represent the logical and the precarious ending more than Bubbles (Andre Royo) and Omar. For five seasons, Bubbles had been the epitome of the tragic side character. A junkie turned criminal informant turned street hustler turned broken man, season five finds him recovering from the death of his protégé, Sherrod, and living one year clean and sober.  His final acceptance of Sherrod’s death near the closing of the season is his turning point and a powerful statement on “getting out” of the death grip of the streets. Likewise, season five has Omar finally surrendering to the streets but gaining an even greater mythic status. For five seasons, he had been the untouchable rogue, but wounded, driven by revenge, and with very few resources, he finally takes a bullet to the head from none other than corner boy Kenard looking to up his rep. In one random act of violence (with more than a few shades of Robert Ford taking out Jesse James), David Simon dispels the romanticism of the modern outlaw.

Much of season five involves removing the sheen of respectability from our hallowed institutions. The newest institution we follow is the Baltimore Sun, the dying newspaper scrambling for relevancy in the digital age. This means profit over truth and sensationalism over journalism. Caught in the middle is Gus Haynes (Clark Johnson), the city editor who tries to hold to journalistic traditions amid cutbacks and buyouts. His clash with rising reporter–and bullshit artist–Scott Templeton (Tom McCarthy) is a main arc for the season, one that intertwines with McNulty’s serial killer fiction in unexpected and amusing ways. Tackling the media’s bloodlust isn’t a new concept, but by juxtaposing it with the world we’ve become so familiar with for four seasons, the show is able to delineate the line between those with the pulse on the city and the unseen citizens who are desperate to be heard. 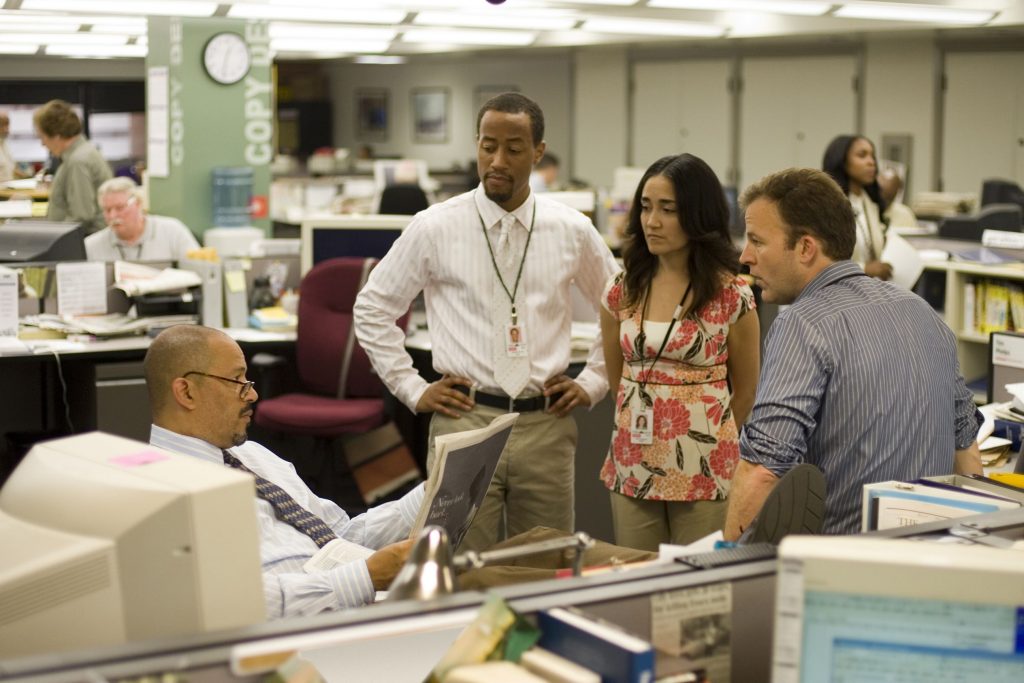 It would make sense then for the final season to go absurdist, as there’s no greater television examination on the futility of human desperation in a senseless and illogical world than The Wire. Theatre of the Absurd abandons conventional drama to explicate the lack of meaning in our world, and with one last visual essay, David Simon subverts it. The world doesn’t make sense precisely because it makes too much sense. The corrupt and the powerful fulfill their roles just as logically as the just and vulnerable. The season concludes with characters exiting their familiar roles and entering new ones. McNulty and Freamon are forced into retirement. Michael becomes the new Omar. Slimy Senator Clay Davis (Isaiah Whitlock Jr.) walks on corruption charges (by exploiting the media and his power within his community), as does Marlo Stanfield after the phony wiretap is discovered (the rest of the crew takes the drug and murder charges, however). Compromises sacrifice some and elevate others. The cycle continues.

Simon’s ultimate statement may seem cynical on the surface; he gets more than a few screeds into the mouths of his characters. But in it’s “the more things change, the more they stay the same” thesis, he provides a respite for some characters and a solution for the greater picture–change starts first with people. In its five seasons and different genres, The Wire wasn’t afraid of changing to speak truth to power.

Shane Ramirez is a professional actor and videographer, as well as a budding filmmaker and novelist residing in San Marcos, TX. A life-long film enthusiast, Shane has written for everyonesacritic.net and examiner.com, and has produced his own short films. He is versed in the arts of cinematography, photography, and editing. His favorite directors are Andrei Tarkovsky, Terrence Malick, Christopher Nolan, Michelangelo Antonioni and Krzysztof Kieslowski. Contact Shane at ramirezs316@gmail.com.

The Games You Haven’t Played – Part 1

Everything We Know About ‘The Wheel of Time’ TV Show