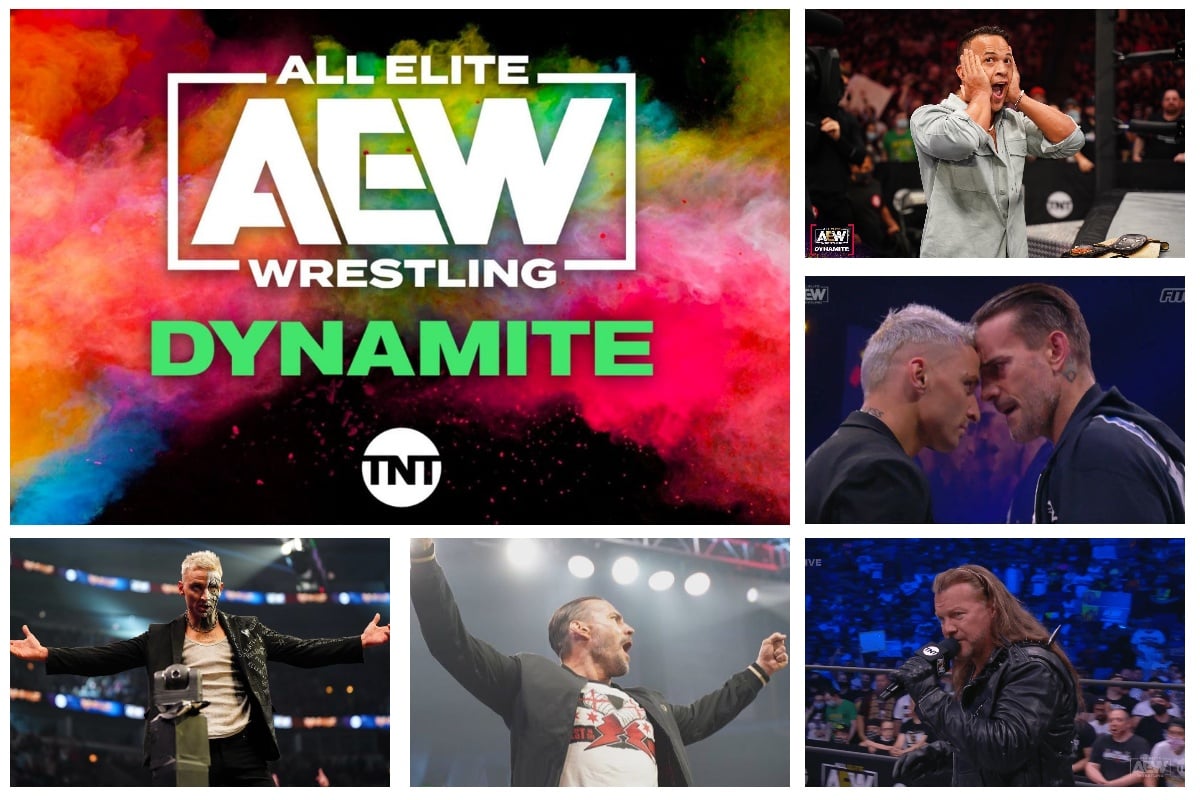 Well, we got here quickly. 100 episodes of AEW Dynamite. It only feels like yesterday that AEW stumbled onto the scene with its janky production and bland theme music. Oh how times change.

AEW has consistently been the most exciting promotion in wrestling since its inception and they don’t seem to be slowing down any time soon. Their flagship show, Dynamite, has soldiered on through from the lows of the pandemic to the highs of the returning crowds. So, like we’ve done with AEW Dark’s hundredth episode before, let’s have a look at the past, present, and potential future of AEW Dynamite.

I say ‘we’. I didn’t contribute very much to AEW Dynamite’s success. While Darby Allin has been flinging himself through all manner of furniture, I’ve been sitting at home eating Pringles and watching it happen. Still, they keep saying ‘it’s all about the fans’. So you’re welcome, I guess.

Going back to episode one of AEW Dynamite on October 2nd, 2019, it tells a very different story. Everyone on the card that night is still in AEW, yes, but everything from the music, camera work, graphics, just about anything to do with production really, is different. Better even. Early AEW wasn’t the crisp, polished product you see today -*cough* their struggle with audio levels for entrances aside *cough*- rather it was a rough-around-the-edges show with many wonky camera angles. You could almost call it “Indie”.

Dynamite has managed to stay consistently entertaining during its run. They’ve not fallen into the TV trap of “content for content’s sake” by running a myriad of rematches, you could even say the show has been too stacked at times too. They’ve even calmed down with their obsession of group run-ins -they must’ve listened to me.

Looking at episode one and episode 100 back-to-back, it’s night and day. Speaking of episode 100.

The show kicked off in blistering fashion with FTR against Santana & Ortis, a great start. Orange Cassidy and Jack Evans had a good bout, Brian Cage vs Hobbs was a fun hoss match, and Tay Conti took on Penelope Ford which can only be described as: “fine”. A main-event four-on-four featuring the Lucha Bros & Jurassic Express against The Bucks and Good Brothers was as much of a flippy spot-fest as you’d expect, Fenix being a standout as is often the case.

The close of the show involved a group beat down by the top heel faction for what felt like an eternity, pretty much exactly the way the first ever Dynamite ended. This had to have been on purpose.

A good episode all-around. Nothing world-beating, but considering AEW have five shows this week –Dark, Dark: Elevation, Dynamite, Rampage, and All Out– we can probably let them off for it not being a five-star event.

Where Does AEW Dynamite Go From Here?

Their second televised show, Rampage, and their love of TV specials has kinda taken away from the mystique of Dynamite, a bit. Their flagship show has started to feel significantly less flagship-y. A bit like when SmackDown is doing better than Monday Night Raw. That’s fine, but it does mean that Dynamite isn’t as must-watch as it has been in the past. Something that is likely to be the case going forward too.

It’s going to be interesting to see what Dynamite looks like when it makes the move to TBS in January of 2022. Is it going to be more definitively split in the way Raw and SmackDown are? Probably not. Though you’d have to wonder if either show will take booking priority depending on viewership.

One thing that may happen down the line, especially after the TBS move, is that it could get a change of look. Admit it, every AEW show looks exactly the same. The music may change, the commentary booth may do too, but visually they’re pretty identical. Considering that AEW does have five shows this week, they do start to blend into one another. A change of aesthetic would be nice. A “glow up” if you will. Oh why did I say that. Sorry, everyone.

For more on AEW Dynamite’s 100th episode, we recommend the latest episode of Talk AEW, which we’ve embedded below.