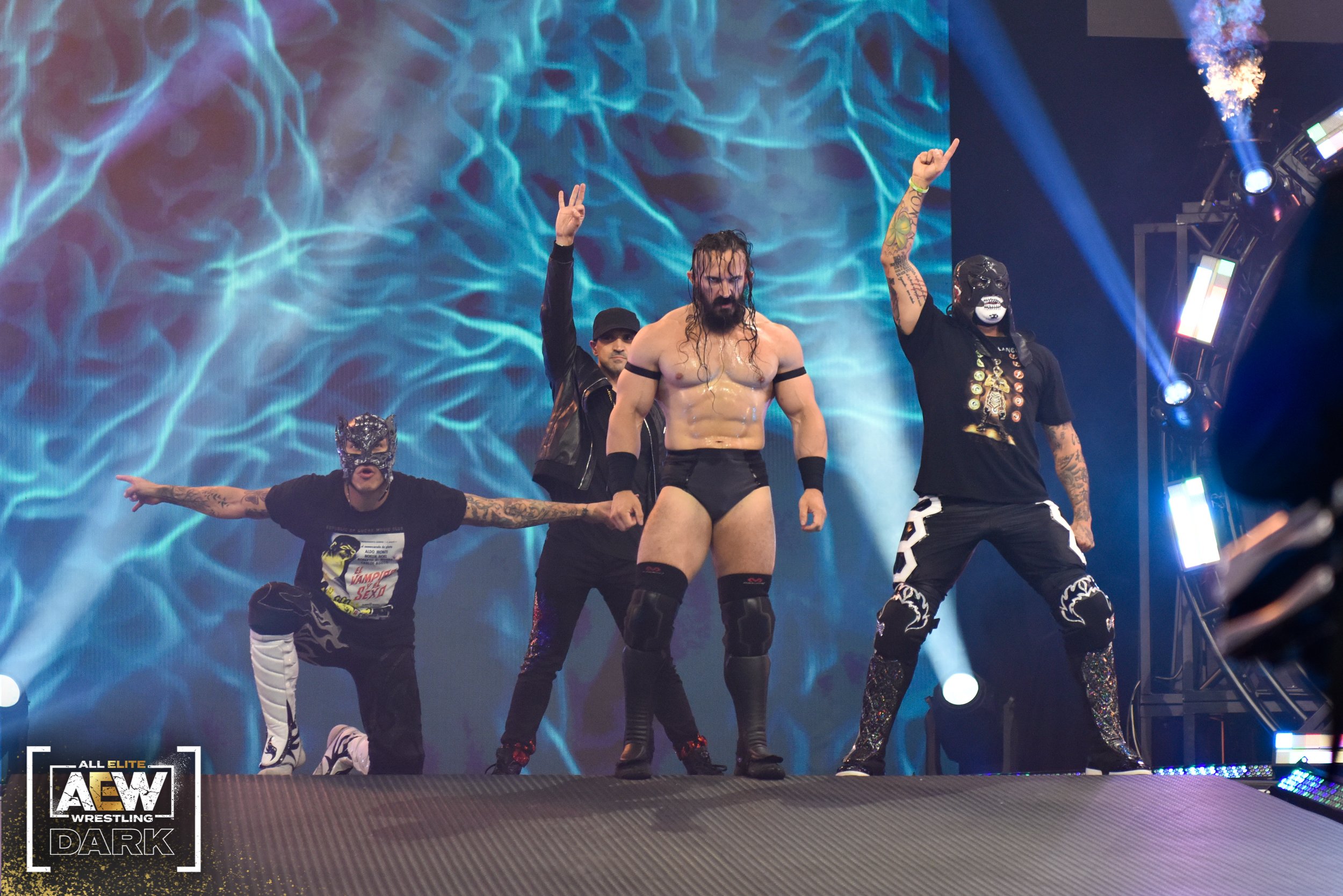 Tuesday the 3rd of August, 2021, saw the hundredth episode of AEW Dark. I know what you’re thinking: “Oh where has the time gone?” Well, if that is on your mind, chances are you haven’t been paying too much attention to AEW Dark. Dark has been around for ages now, it’s just that sometimes AEW’s secondary doesn’t get the love it deserves and may slip to the back of your mind.

So let’s give AEW Dark some due care and attention, look at why you should be watching it, as well as a quick look at the hundredth episode while we’re at it.

So What’s The Point Of AEW Dark?

That may sound a bit dismissive at first, but it’s a question worth answering. It may be difficult for a casual AEW fan to understand the real point of Dark. On the face of it, the name ‘Dark’ in reference to a ‘dark match’ denotes that it’s an inconsequential display purely for the live crowd. That statement would be doing a disservice as Dark does do a worthy, canonical service.

As AEW sticks -mostly- rigidly to their ranking system, it can be difficult to push someone quickly through the chain. Let’s say Adam Scherr -FKA Braun Strowman- debuts soon, as strange and unnecessary of a business decision that would be on AEW’s part -bare with me, this is just an example. Let’s assume that AEW wants to push him as a title contender ASAP -again a reckless move. If it was just Dynamite, it’d take multiple months to reach the spot of top contender and quickly sully any immediate excitement in the process. Dark is a good way for talent to improve their win/loss record without AEW needing to find space between story segments on the main show. Just to clarify: this idea was for the purposes of an extreme example, not a suggestion, AEW.

Secondly, Dark is a good way of showcasing lower card talent and giving them some real screen time before they hit the big leagues. There’s far less pressure as it’s on YouTube rather than a TV network, so it’ll give the wrestlers more confidence to go out and show what they can do. All-in-all, Dark is a good way to avoid having a backlog of talent sat waiting in catering until they’re called up for their spot, while inevitably growing ring-rust in the process.

So What’s So Great About AEW Dark?

We’ve had some cracking matches over Dark’s tenure. While some of the bigger names will usually appear for a quick squash match, some will stick around and work like it’s the main event of All Out. Kenny Omega especially has turned up on multiple occasions, like the one against Joey Janella for example. Darby Allin was a beacon of early AEW Dark, consistently putting on belters like the one with CIMA. Dark stalwarts like Jack Evans, Cutler, and Avalon have carved out a nice little niché for themselves. We also can’t forget about all the new talent giving their absolute all to prove themselves to AEW’s higher-ups. It’s good stuff.

Oh, and of course, one of the undisputed highlights of Dark. The part that’s even debatably better than Dynamite itself. I am of course talking about Taz and Excalibur. That’s right, the commentary team alone makes it worth tuning into Dark. The fact that it’s a less intense, more laid-back show means they can let-loose, and are clearly loving every minute. It can of course have its downsides in that, at times, it slightly detracts from the action, but they more than make up for it by making even the dullest match interesting.

Also, the fact that Dark is on YouTube means it is much more accessible than most other wrestling shows. You don’t need any subscriptions, network television, or dodgy streaming sites to get your wrestling fix.

The only thing you are losing out on is production quality, it being a lesser experience.

The hundredth episode of AEW Dark, which inspired this very article you are currently reading, was an alright one. Moxley showed up for a short-but-sweet match against Brick Aldridge, proving that Dark is definitely not a developmental brand. Yuta, Orange, and Chuck of Best Friends took on Bononi, Nemeth, and JD Drake in a fun cluster of an opener. PAC and Jack Evans stole the show doing what the pair do best. Eddie Kingston main-evented against Dante Martin in a fine match, but other than that it was a series of short, uneventful bouts.

Taz and Excalibur were as entertaining as ever. As always it was a case of constant jokes, often about Taz’s height, and Taz regaled us with anecdotes. It’s what Dark is best known for and hopefully that never changes.

AEW celebrated episode one-hundred in an understated fashion, but it was a good reminder of why AEW Dark is worth your attention. It’s an entertaining glimpse of the past, present, and future, and they showed a little bit of everything that Dark has to offer in this iteration. Go on. Give it a watch.

The Spectacular Debut Of Daniel Garcia and 2.0

New vs Old: How AEW Connects With Fans